Escape to Sado: 9 Things to Do on the “Island of Exile” No ratings yet. 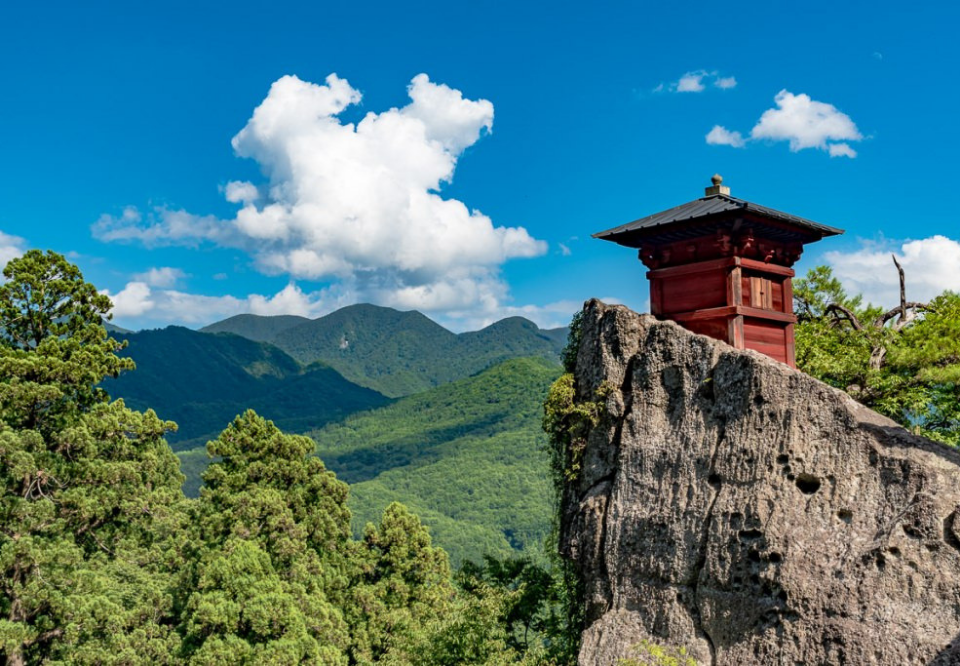 For tourists who are focusing on capturing the beauty of Japan’s untouched landscapes, Yamagata will offer you with the best eye-catching view you won’t get anywhere else. Before we start, Yamagata is a prefecture in the Tohoku region, just beside Miyagi Prefecture. The prefecture is strategically located alongside the Sea of Japan.

Not many visitors knew about this place as it is situated on top of a mountain in a quite remote area. Its official name is actually ‘Hojuzan Risshakuji Temple’ and it was built around 1,000 years ago. Due to its scenic beauty, Yamadera Temple was once featured in a Japanese live-action film called “March Comes in Like a Lion”.

Top of the temple. Image Souce: Is Japan Cool?

In order to reach the top of the temple, you need to climb an insufferable amount of 1,000 steps which will take approximately 30 minutes. Climbing the steps can be quite a task to some, but, it is worth every sweat. The temple was named as ‘Place of Scenic Beauty and Historic Site’, nationally. In between the hike, you can stop for a while to catch a breath or simply enjoy the view before resuming your journey. Also, you will come across several prominent buildings such as Mida Hora rock (shaped like Amida Buddha), Niomon Gate, Kaisando Hall and Godaido Hall.

If you are familiar with the works of Matsuo Basho, a famous Japanese poet, there is a stone statue built for him as can be seen when you hike up the mountain. He fell in love with Yamadera’s beauty and has written some of his poems while he was here. He wrote about Yamadera Temple in ‘Oku no Hosomichi”, translated as ‘The Narrow Road to the North’ back in 1689. One of the must visit places is the Godaido Hall, a wooden observation deck where you can bask in the panoramic view of the whole area. 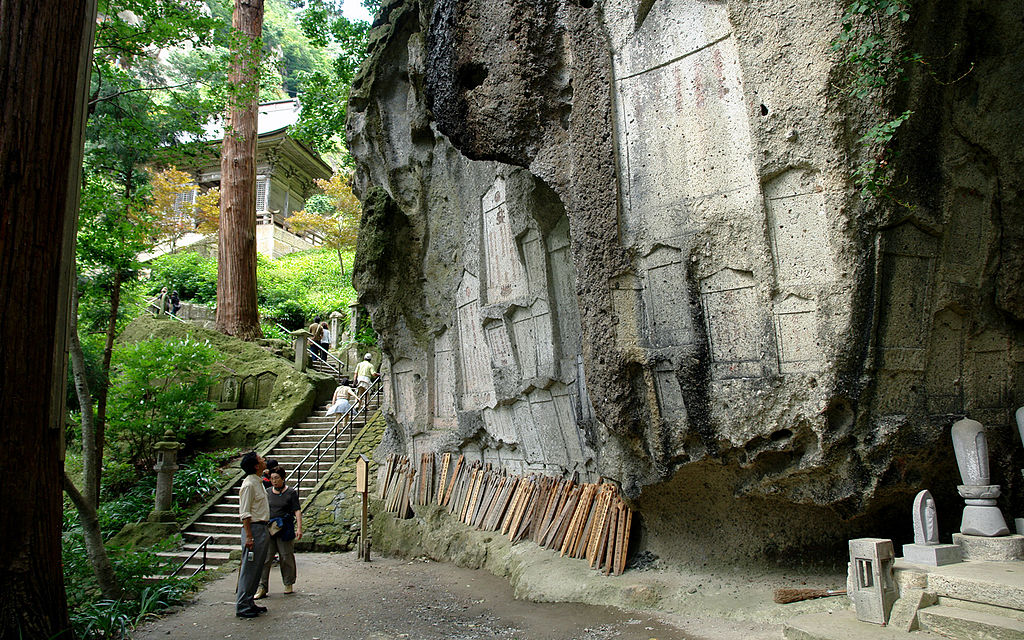 Ginzan Onsen doesn’t need an introduction as this is probably the most beautiful hot spring town in all of Japan. The onsen looks effortlessly stunning each season, but, if you ask us when is the best time to go here, the answer would be during winter. As the town is blanketed with white powdery snow, you can warm yourself up by dipping in the nearby onsen facility. 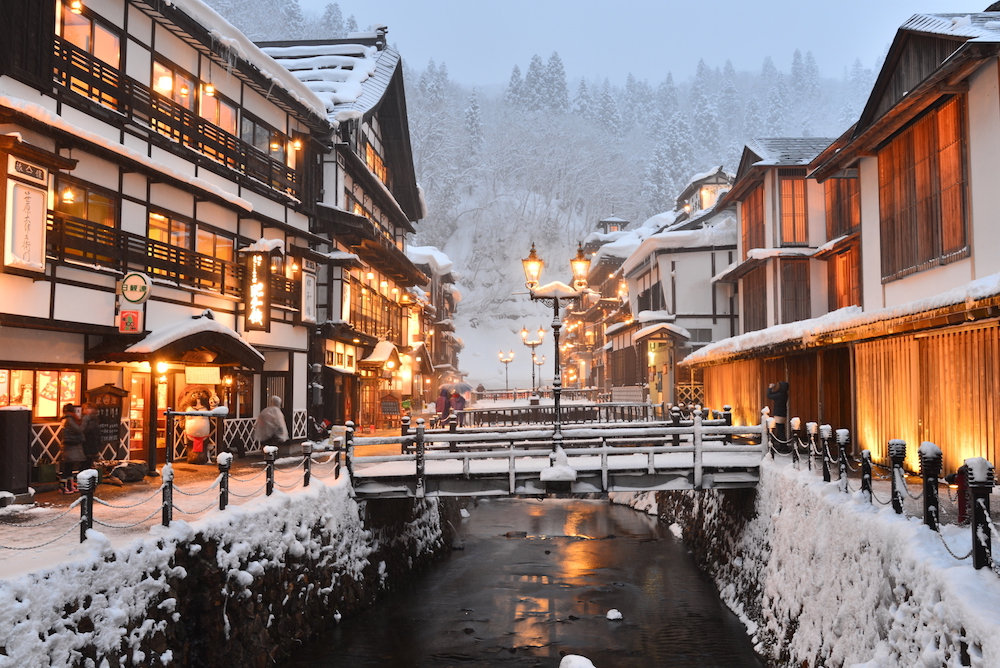 First of all, Ginzan Onsen got its name from a giant silver mine which was a huge success back in the olden days. The water is great for treating wounds and skin diseases. As can be seen from the picture, the structures surrounding this hot spring town are entirely made out of woods and consist of only three to four levels. 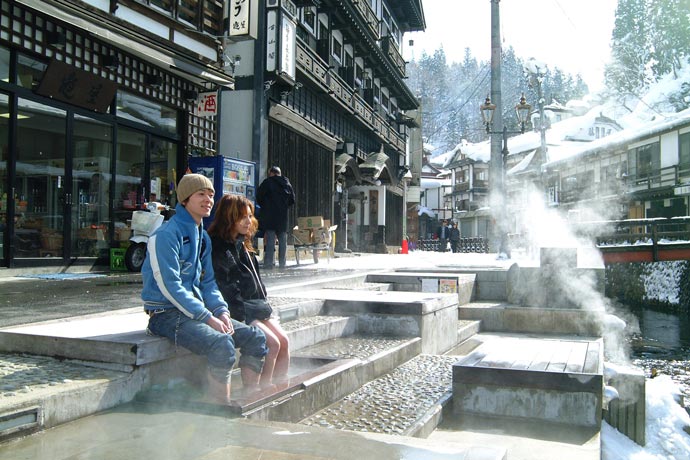 Similar to Yamadera Temple, this place served as an inspiration behind an animated film, ‘Spirited Away’ and a filming location for Japanese television drama, ‘Oshin’.

Aside from the onsen, what is there to do here? There is a free foot onsen situated within the area, restaurants and souvenir shops lining along the ryokans, a former silver mine in which you can visit and a waterfall. We highly recommend you to at least spend a night here just so you can experience Ginzan Onsen and its whimsical night scenery. 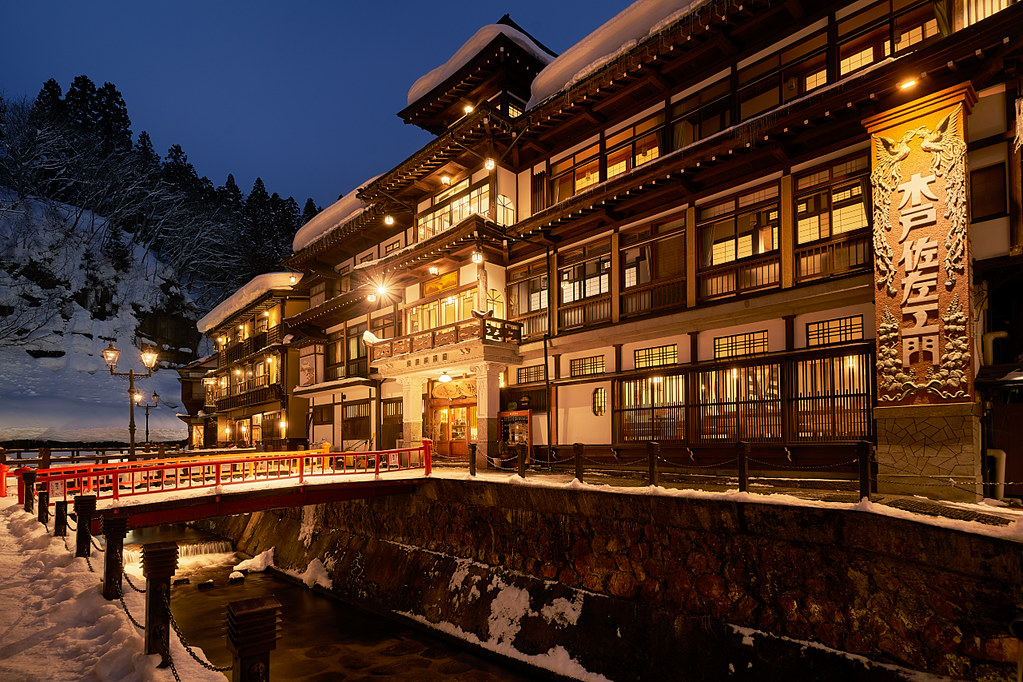 To get here, a bus named ’Ginzan Hanagasa-go’ will take you to this place when you get off your train at Oishida Station. The trip will take 40 minutes.

Home to the oldest wooden pagoda in the Tohoku region and a 1,400 years old cedar tree, visit the historical site of Mount Haguro. Spreads out from Yamagata to Akita Prefecture, this place has earned three stars in Michelin Green Guide Japan 2009. Here’s why: 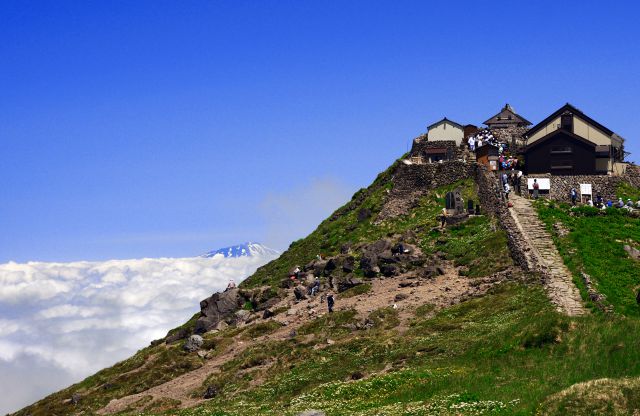 Furthermore, the site is home to two gods namely, God of Agriculture and God who watches the Dewa province.

To get up to the main highlight of Mount Haguro, you need to hike up over 2,400 steps. Yes, it is a lot and will take about one hour or so to reach the summit. The first thing you will see is a 29 meters tall wooden pagoda, Goju-to. It was built in 937. 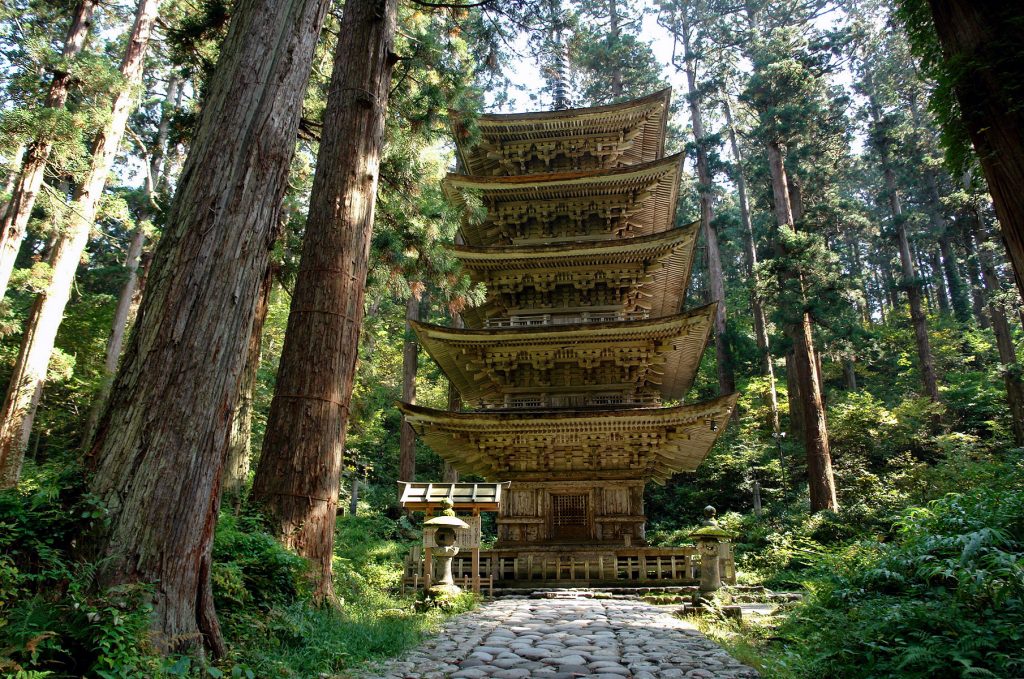 After that, you will also notice a huge tree tied with a rope. This is the 1,400 years old cedar tree known as Jijisugi, the Grandfather tree.

A wooden structure with thatched roof called Dewa Sanzan Shrine is said to preserve the spirits of the three mountains here. If you know a thing or two about the Japanese New Year’s traditions, when the clock strikes midnight, most locals will head to a shrine to ring the New Year’s bell for 108 times. Every year, you will see a lot of people travelled to Dewa Sanzan Shrine to welcome the New Year by performing the holy ritual. 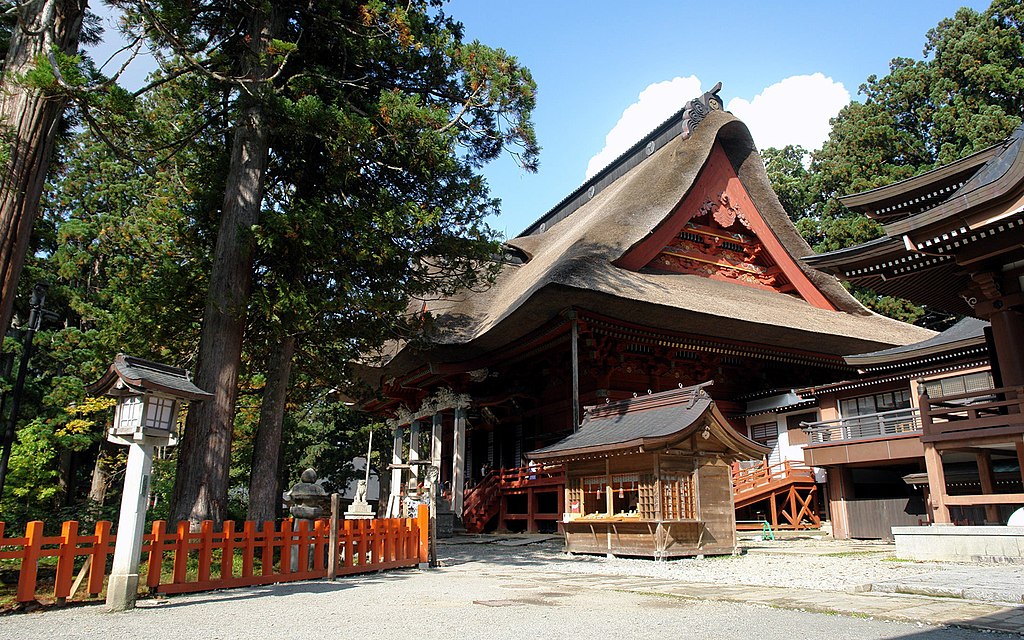