What You Need to Know About Sumo 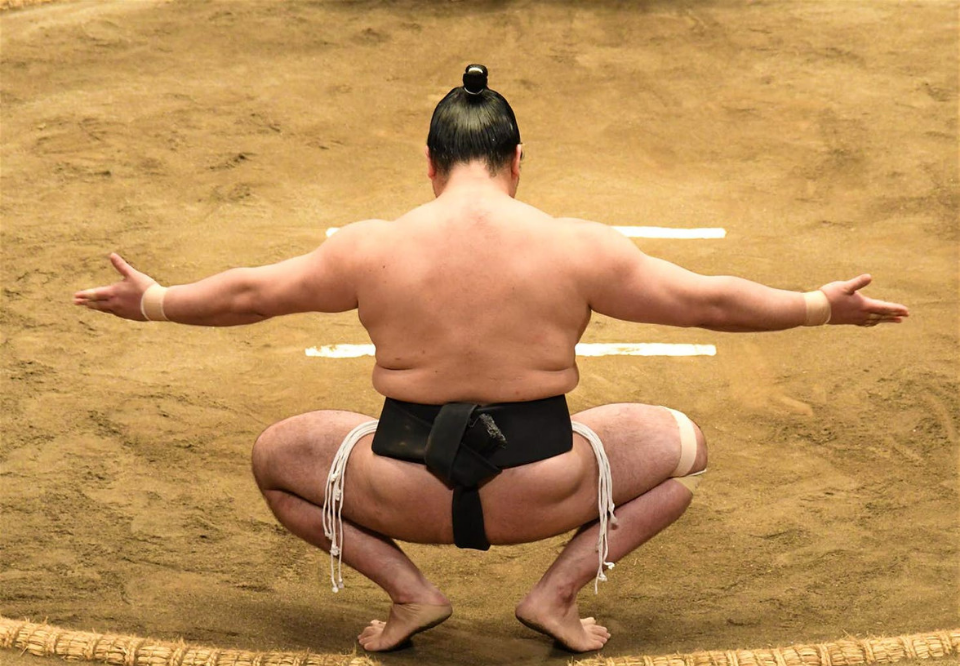 What You Need to Know About Sumo
No ratings yet.
Tags: entertainment • fukuoka • japaneseculture • nagoya • osaka • tokyo • 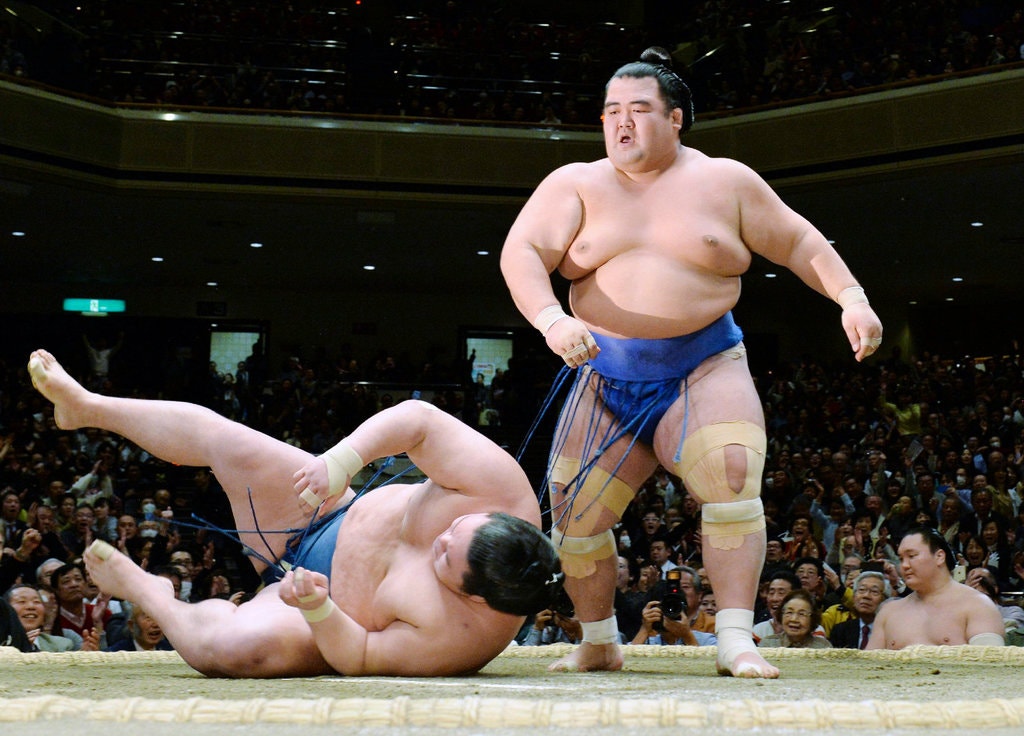 Sumo is one of Japan’s unique and popular form of sports. So, how much do you know about sumo? In this article, we’re going to provide an A to Z guide about sumo and where you can go watch the tournament.

Sumo is the Japanese version of wrestling, where it involves two plus size men, a ring and a referee. Sumo was originated during the ancient times to please Shinto deities as part of the religion’s ritual. As years passed by, sumo has transformed into a sport which is loved by the Japanese as it is very entertaining to watch. To win a sumo fight, one of the wrestlers must touch the ground with any parts of his body or steps out the circle. 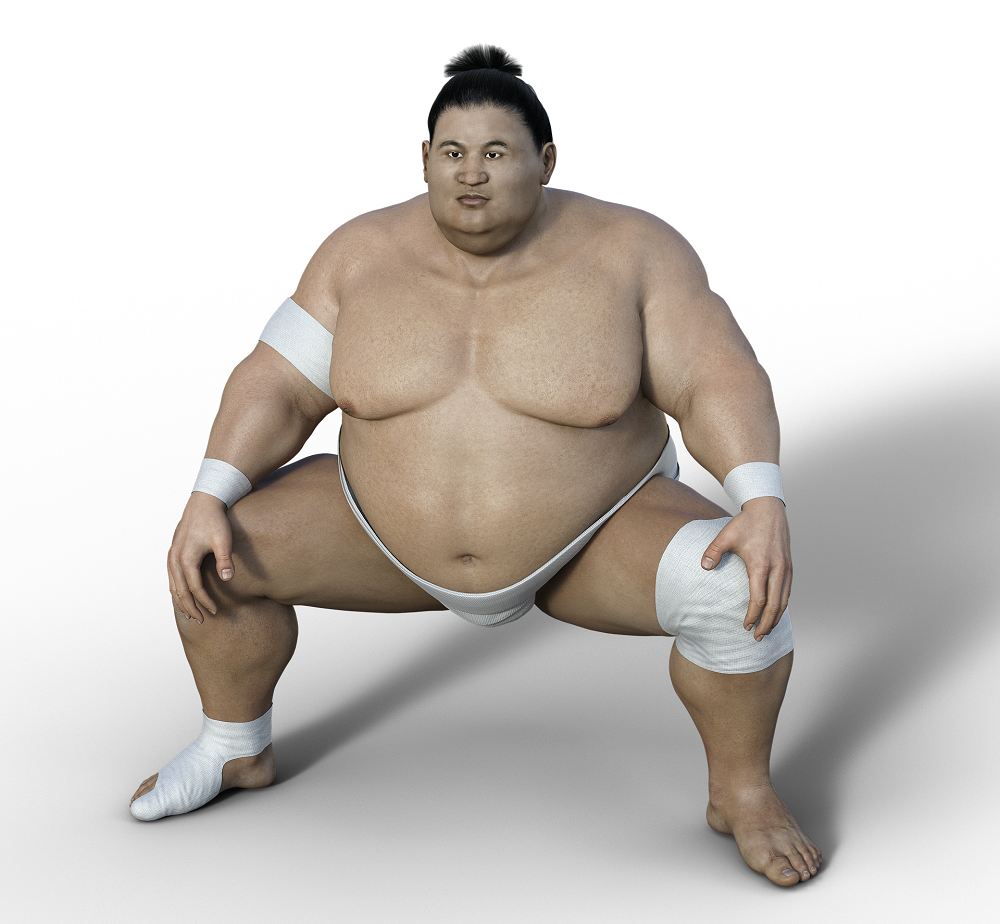 The circle you see on the battle floor determines the winner. It is called the dohyo. It is made out of clay and covered in many layers of sand. It is two feet high and has a diameter of 15 feet. 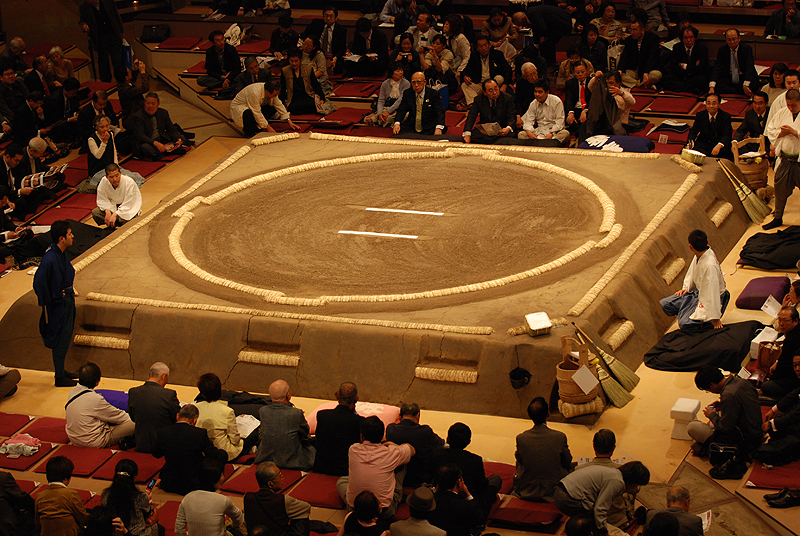 A roof suspended above the ring is called tsuriyane. The roof is constructed to shape like a Shinto shrine’s roof with colourful tassels dangling on each end. The tassels represent four mythical creatures from Chinese traditional astronomy. These creatures are believed to be the guardian of the four main compass directions and the four seasons. The green tassel represents azure Dragon for the spring season (East), the black tassel is Turtle for the winter season (North), the red tassel is the symbol of Vermilion Bird in summer season (South) and white tassel is for Tiger in the fall season (West). 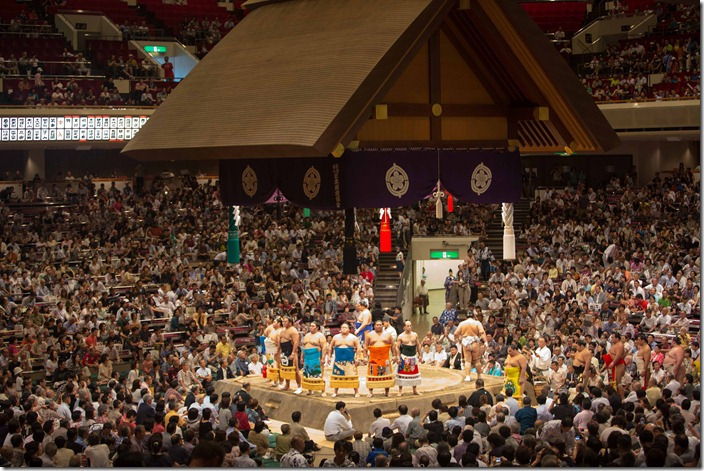 Referee or gyoji stands inside the ring to watch the wrestlers and support them. They are usually dressed in colourful clothes and a small black hat. Meanwhile, the judges sit at each side of the ring and they are dressed in black. They only voice out their opinion if need to question the referee’s decision. 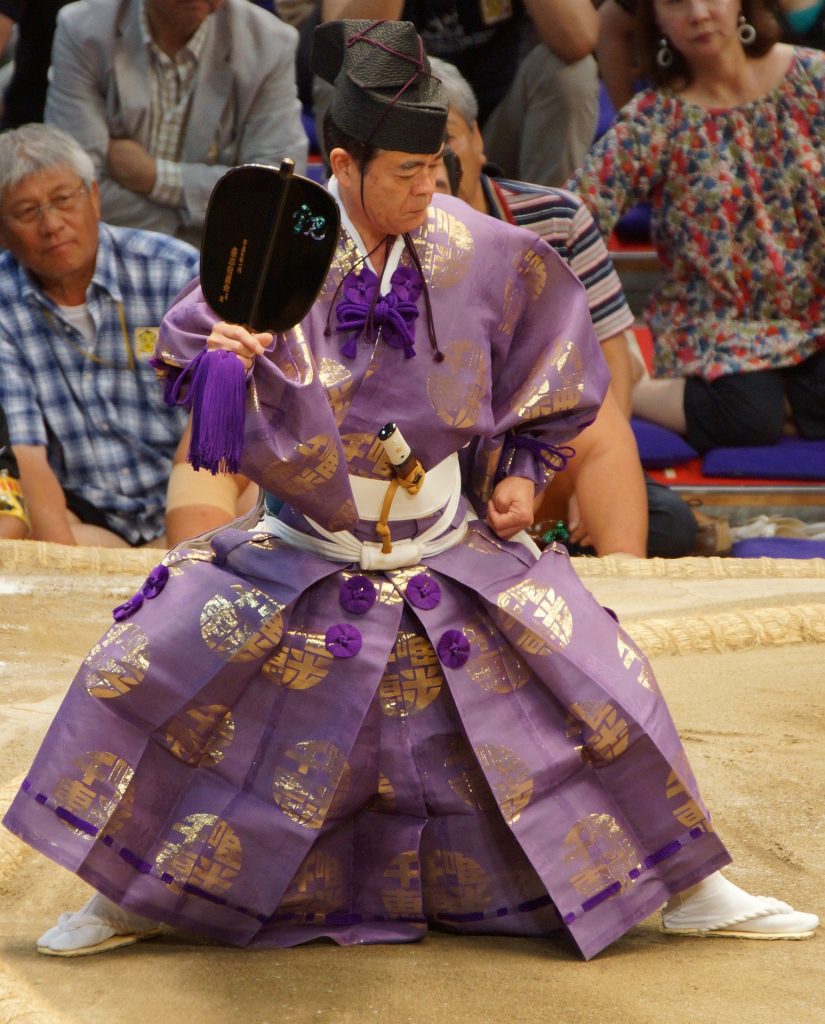 In total, there are six rankings in the sumo world. The first division is called Makuuchi. In Makuuchi, there are Yokozuna (the highest), followed by Ozeki, Sekiwake, Komusubi and Maegashira. Then, comes Juryo. Those who are in the Makushita, Sandanme, Jonidan and Jonokuchi divisions are considered as newbies and still in training to become professional sumo wrestlers.

Interestingly, those in Yokozuna, they will not be demoted, but they will retire when they started to show poor performance. The most famous Yokozuna is a Taiho Koki, he earned the title when he was just 21 years old. Those who are in the lower divisions can be promoted based on the number of winnings. The more they win, the faster they can climb up the ranking. 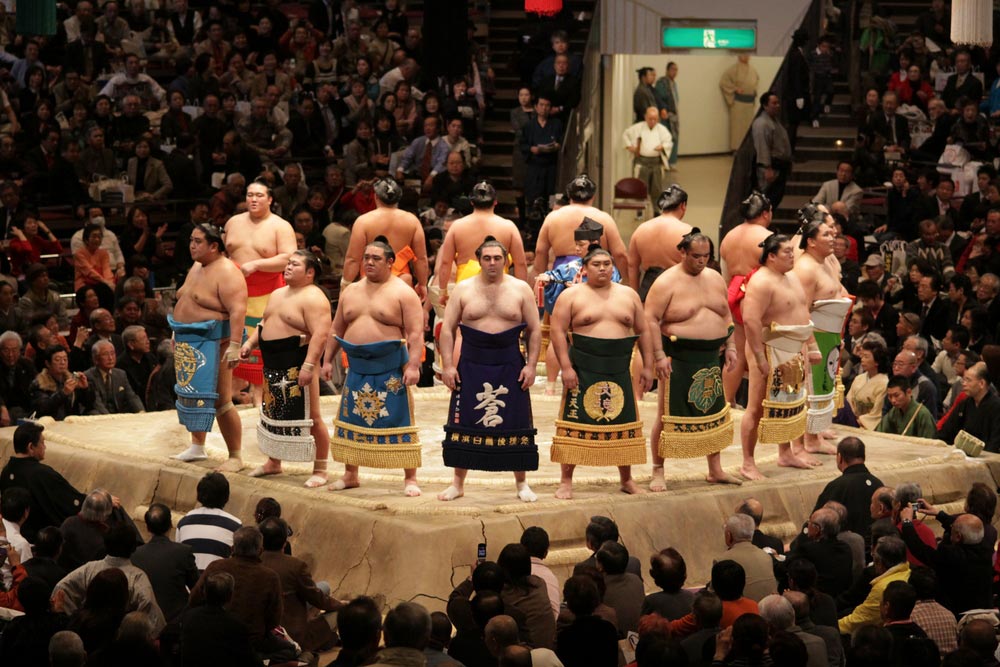 Those in Makuuchi will enter the ring first. They will wear a kesho-mawashi and form a circle. Then, they will lift up their apron to show that they don’t bring any weapons. After that, they will exit the ring. The tournament starts from the lowest division, followed by the second division and ends with the top division. 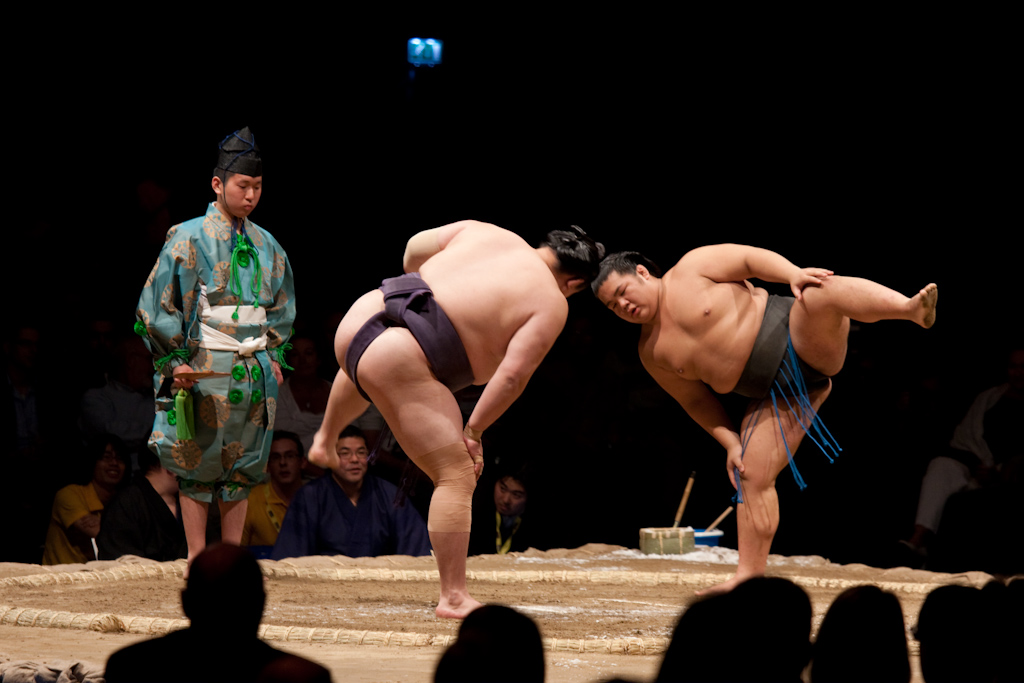 Shortly after, the announcer will call out two wrestlers to enter the ring. The two wrestlers will enter from the east and west side of the ring. Both of them will squat, rise, and raise up one of the legs in the air. Then, they will stomp their leg on the ground. This procedure is done to scare the opponent and this could go on for several minutes before the real fight commences.

Then, the wrestlers will rinse their mouth and wipe their faces with a paper towel, then return to the ring. They will once again squat and clap their hands to show that there are no weapons carried into the ring. In every sumo ceremonies, it is required for both wrestlers to throw salt to cleanse the ring and protect them from injuries. Lastly, both wrestlers need to place both of their fists on the ground to start the match. Each fight lasts for only a few seconds. The longest would be around one minute. 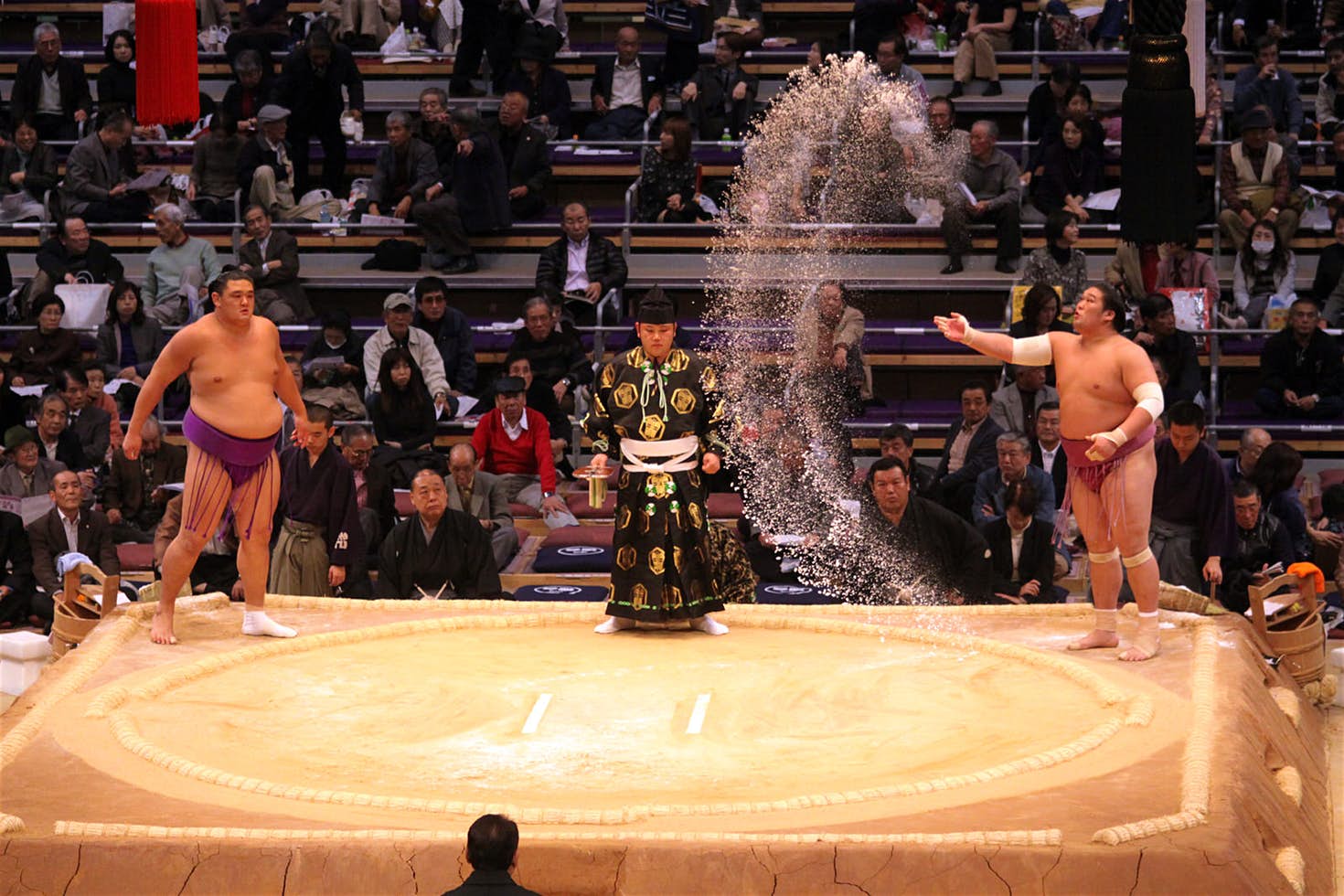 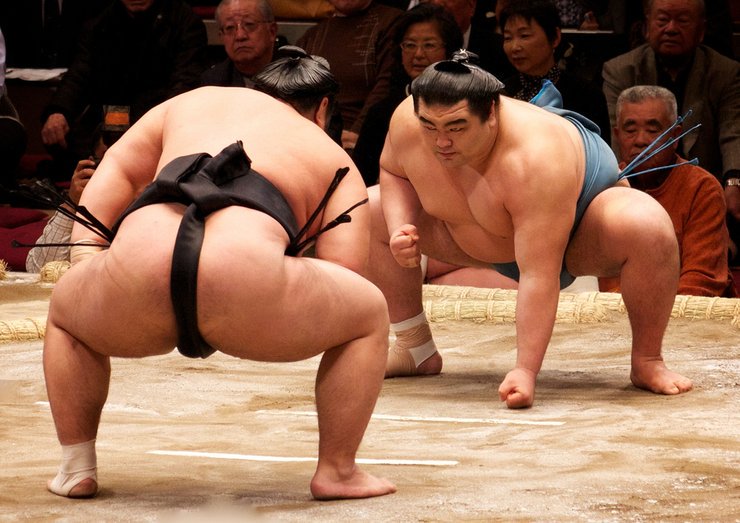 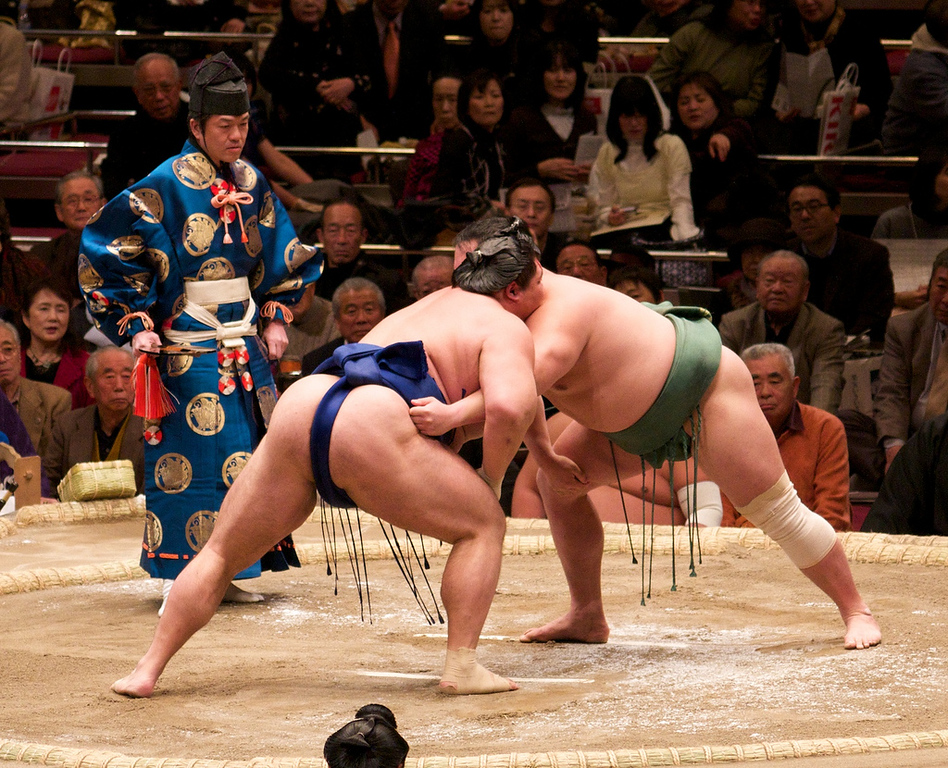 When Can You Watch Sumo Tournament?

Generally, sumo tournaments are held six times a year, during odd months starting from January. The tournament usually lasts for 15 days and starts from 8:00AM until 6:00PM. If you ever feel hungry, you can buy a lunch set inside the venue as you are not allowed to bring outside food/drinks. For non-Japanese speakers, Tokyo Grand Sumo Tournaments is the only venue that provides English commentary. You can also rent a radio set costs ¥200 that contains English audio with a deposit of ¥3,000 which will be refunded to you once you return the radio.

How To Watch Sumo Tournament?

For the upcoming sumo schedule and venues, you can check for updates here.

You can purchase tickets through https://buysumotickets.com/, at the venue or at any 7-eleven outlets in Japan. You can get tickets easier if you come on weekdays than weekends. 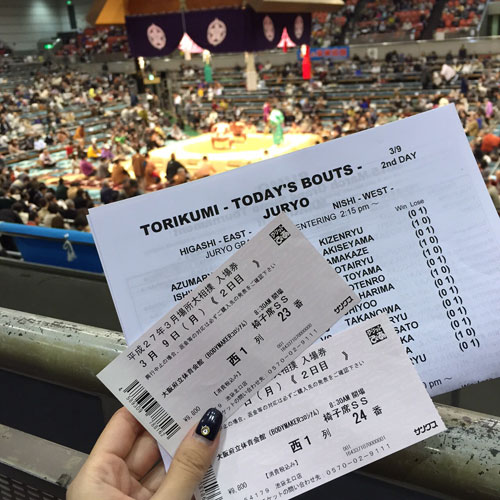 There are three types of seating options;

Located at each side of the ring, unfortunately, the tickets for this seating area aren’t available for the public. It is sold to only people with sumo connections and special guests.

This seat can fit only up to four people and it is sold per box, not per person. You need to take off your shoes and sit on a cushion. The Japanese-style box seats are divided into three categories which are A, B and C. Option A is situated very close to the ring and option C is the farthest. If you want to feel comfortable throughout the match, we recommend two persons per box. 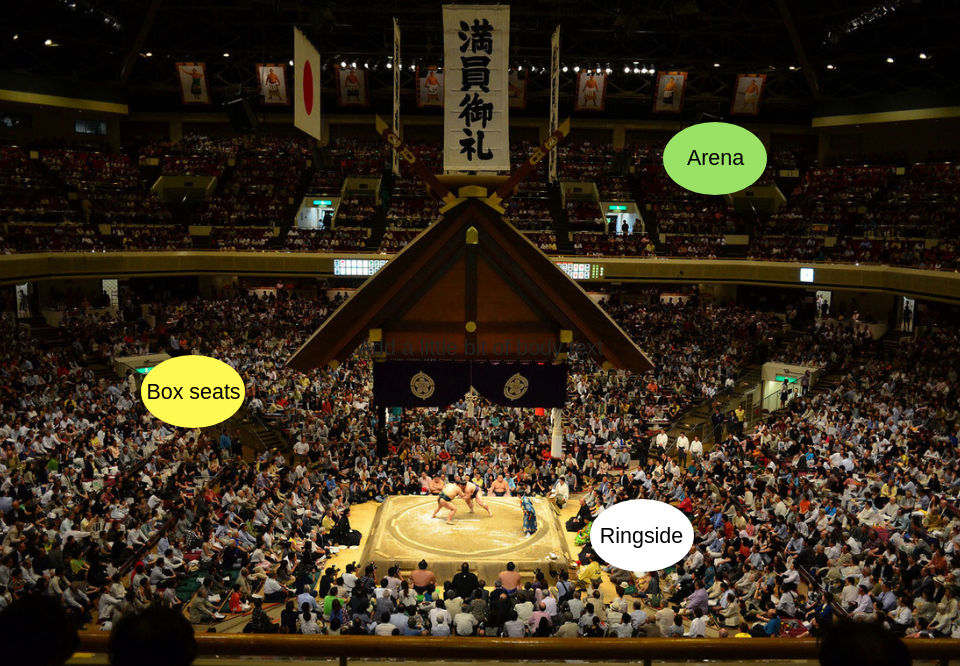 In conclusion, sumo wrestling is truly a once in a lifetime experience. Those who don’t know anything about sumo, don’t worry because you will get familiarized with the rules and rituals as you watch the match. 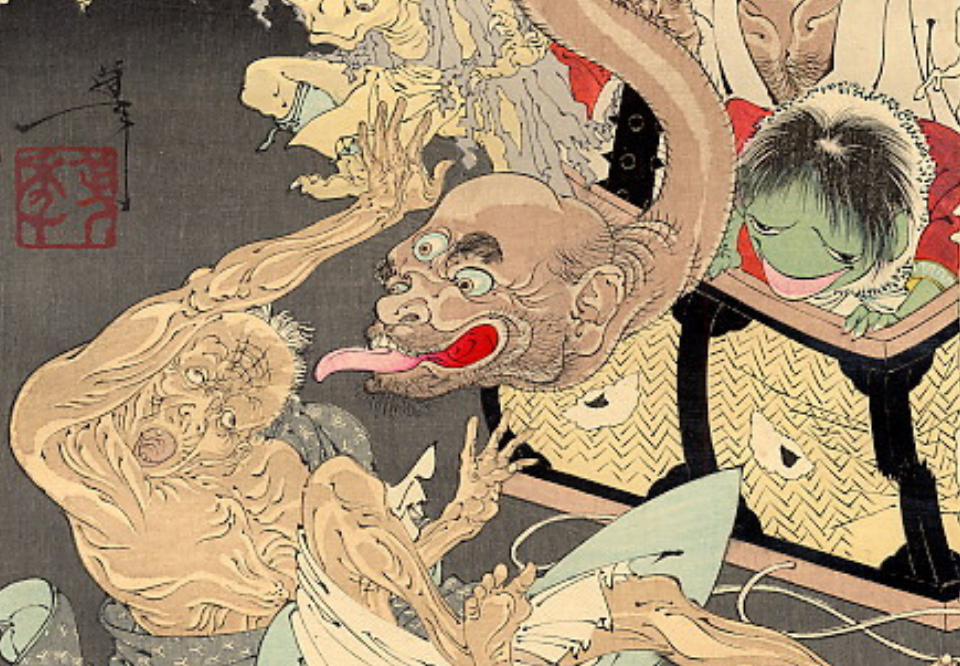