Venture out of Tokyo and Osaka: Highlights from 7 Prefectures of Kyushu (Part 2)

Venture out of Tokyo and Osaka : Highlights from 7 Prefectures of Kyushu (Part 1) No ratings yet.

Top 3 Beauty Best Buys In Japan (Part 2) No ratings yet. 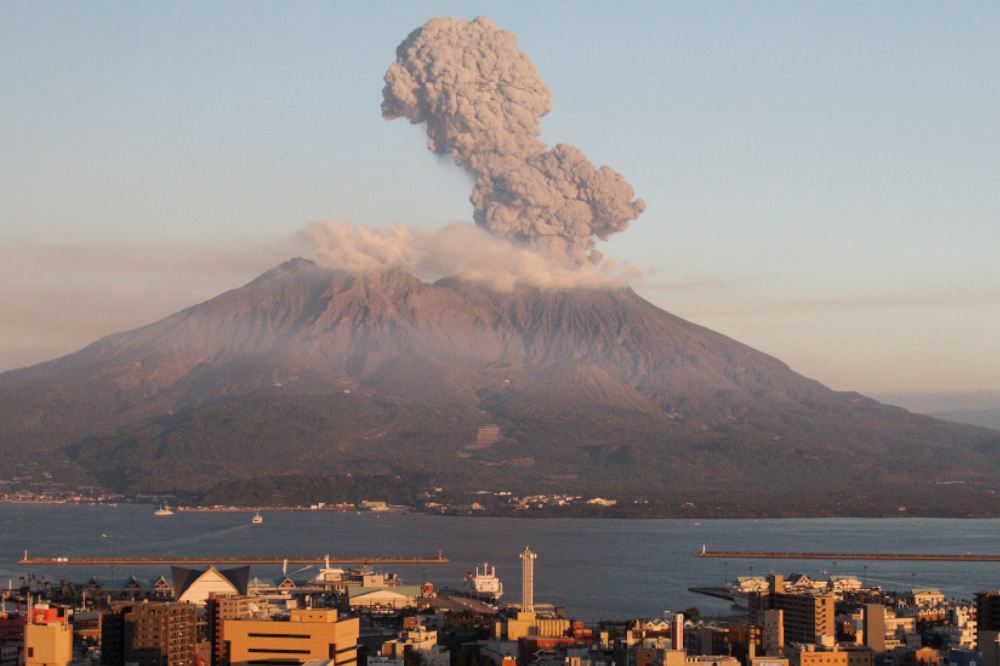 Venture out of Tokyo and Osaka: Highlights from 7 Prefectures of Kyushu (Part 2)
No ratings yet.
Tags: destinations • kagoshima • kyushu • miyazaki • oita •

In the part 1 article, of this introductory feature about Kyushu, we have introduced four out of seven prefectures of Kyushu (Fukuoka, Saga, Kumamoto and Nagasaki). So for this part 2 article, we are going to take a look at the remaining three prefectures of the region, namely Miyazaki, Oita and Kagoshima. 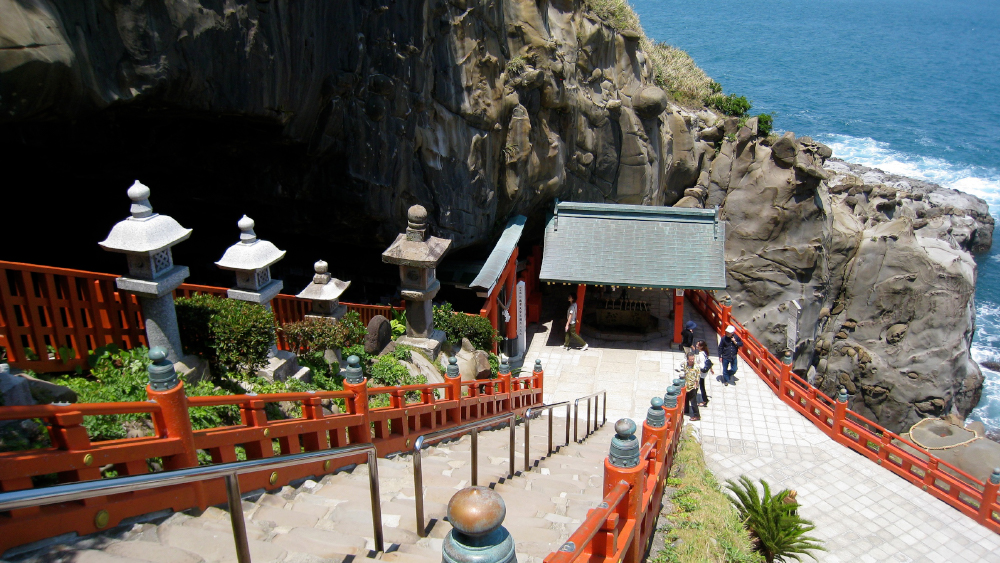 In Miyazaki, out of the city there is Udo Shrine (鵜戸神宮) located in the side of a cliff overlooking the stunning Nichinan coast, and also Aoshima (青島), a small beautiful island with a shrine and the Devil’s washboard (鬼の洗濯板, Oni-no-Sentakuita) the strange rock formations that are especially visible at low tide. 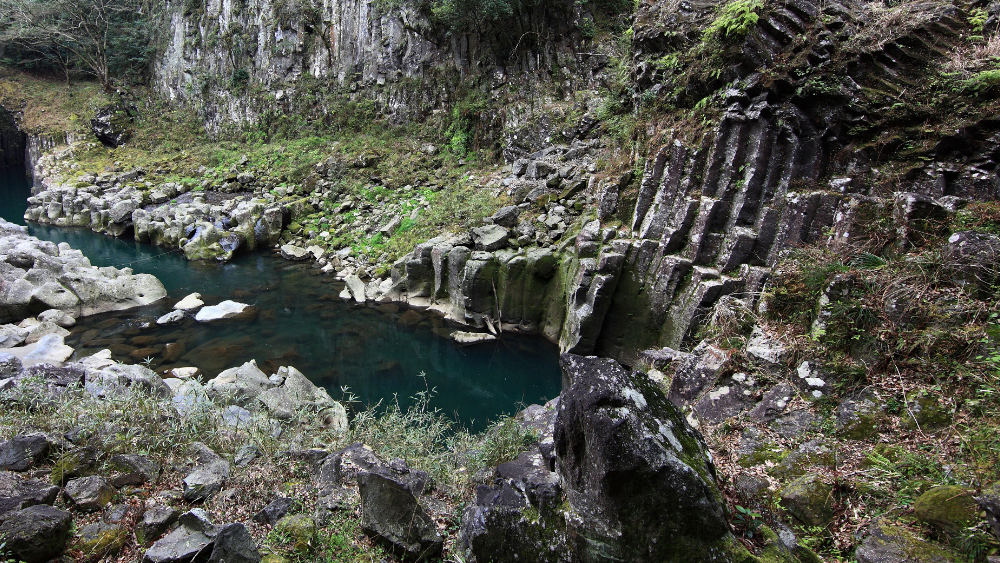 Takachiho (高千穂) is known as a spiritual power spot. Here you can visit Amano Iwato Shrine (天岩戸神社) and Amano Yasukawara (天安河原), which according to legend are where the sun goddess Amaterasu hid herself and all other gods gathered to discuss how to lure her out. Don’t miss the wonderful Takachiho Gorge (高千穂峡) and Manai Waterfall (真名井の滝), as well as Takachiho Shrine where you can watch Kagura (神楽), a Shinto theatrical dance means god-entertainment. 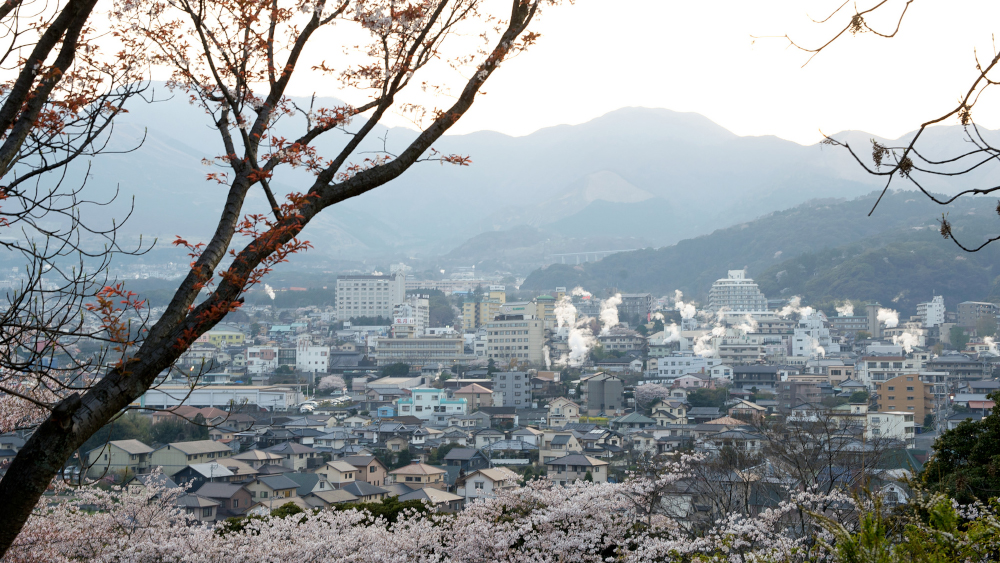 In Oita, go to Beppu (別府) and Yufuin (湯布院) to get a feel of being in the hot spring haven. Beppu is an onsen town famous for the range of hot springs for bathing, as well as jigoku (hells) – boiling mud pools, hot water ponds and geyser in different colours for viewing. There is also Takegawara Onsen (竹瓦温泉), a popular public bathhouse built in Meiji-era offering onsen in a traditional atmosphere, as well as Mt. Tsurumi (鶴見岳) which the peak (can be reached by hiking or ropeway) commands the vista of the entire Beppu city. 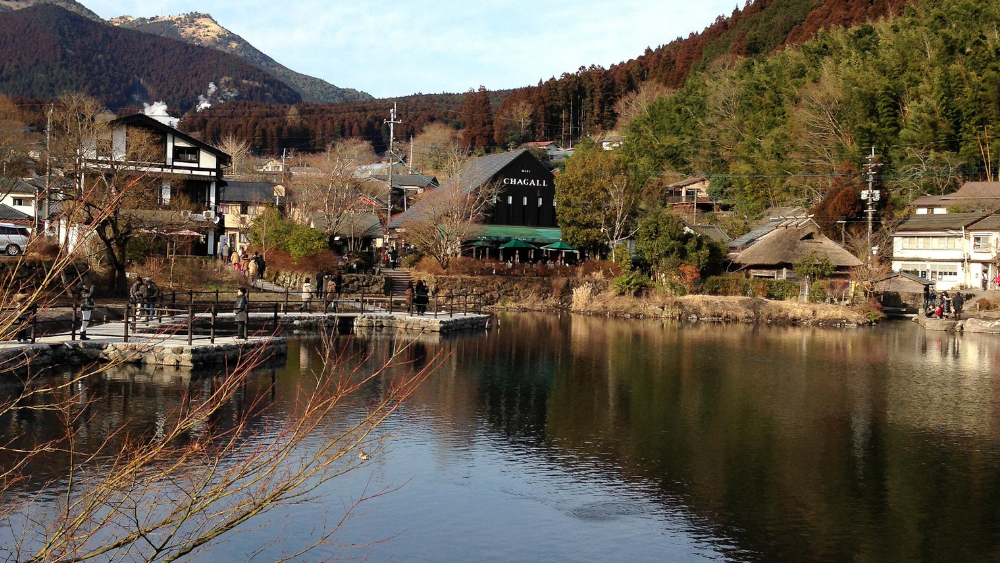 Scenery in Yufuin
Photo by Banalities / CC BY 2.0

Another popular onsen town is Yufuin. Featuring Mt. Yufu (由布岳), Lake Kinrin (金鱗湖), and town centre lined with many cafes and specialty shops (the local crafts are worth checking out) which give a hip, trendy vibe, it is a destination good for a day trip even not staying overnight. For something different, head to the Kunisaki Peninsula (国東半島), where the temples and shrines of the Rokugo-Manzan (六郷満山) showcase the rich, ancient Buddhist-Shintoist culture dating back more than 1,300 years. 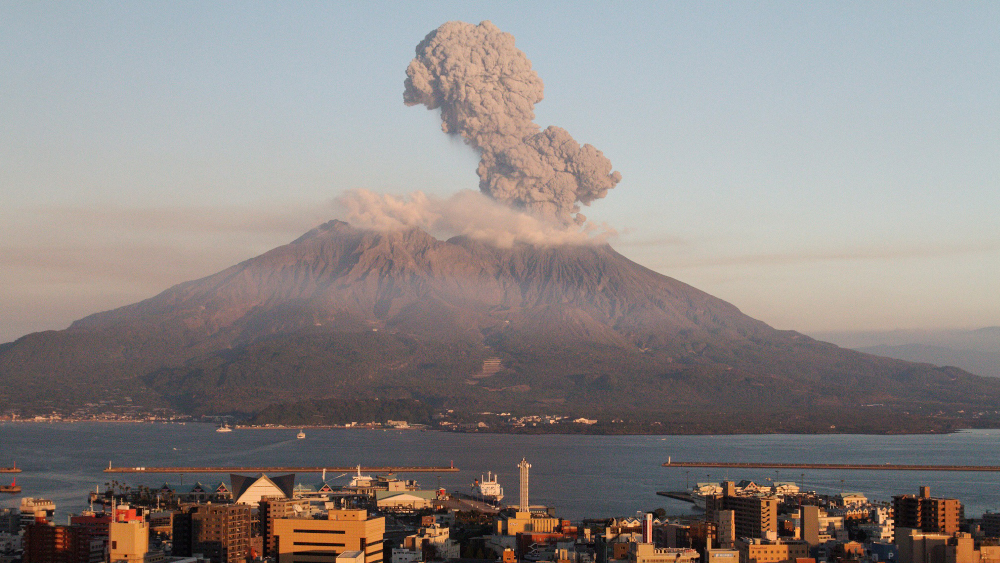 In Kagoshima, the iconic view of Kagoshima city with Sakurajima (桜島, one of Japan’s most active volcanoes) as the backdrop is one of the must-sees for visitors. It is perfectly okay to visit Sakurajima, even the phenomenon of eruptions can be viewed from several observatories located around the vicinity. Go to Shiroyama Garden (城山公園) for the breathtaking view of the city, Kagoshima Bay and Sakurajima. Alternatively, the Senganen Garden (仙巌園) is a Japanese garden with the views of Sakurajima across the Kagoshima Bay. 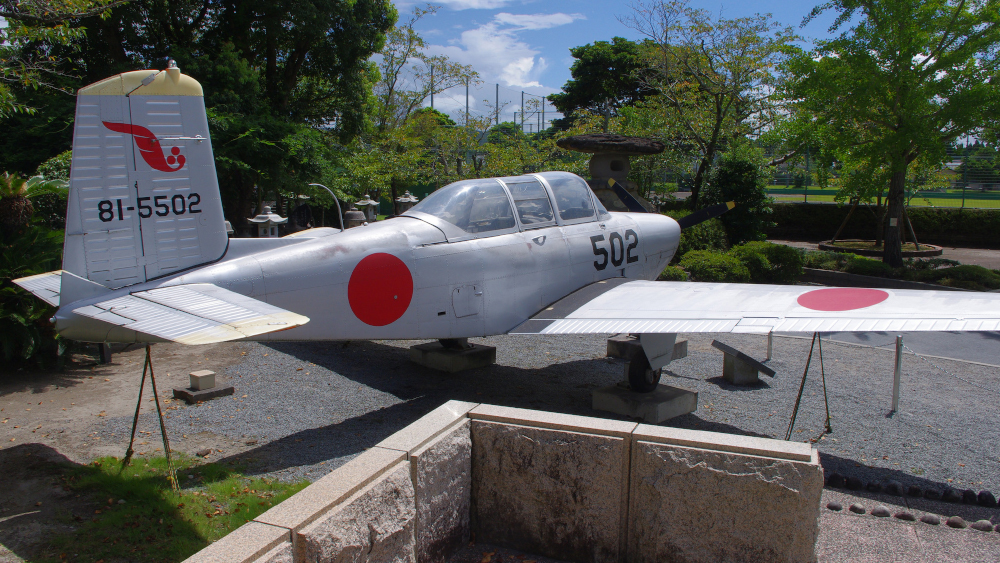 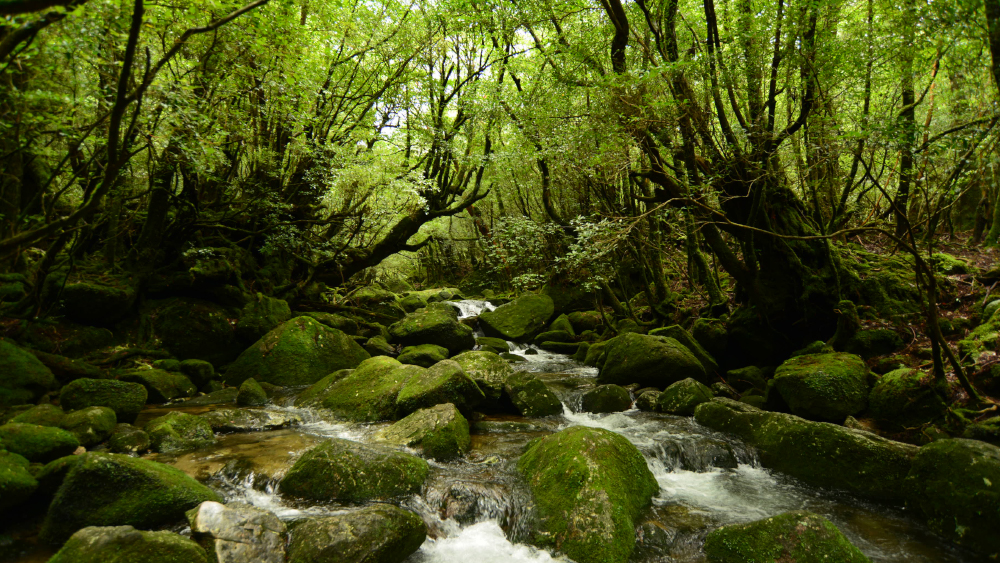 Heading out of the city, check out Chiran (知覧) for Chiran Samurai District and museum about kamikaze pilots Chiran Tokko Museum (知覧特攻平和会館), Ibusuki (指宿) for hot sand bath, and Cape Nagasakibana (長崎鼻岬) for great views of the southernmost tip of the Satsuma Peninsula (薩摩半島). Yakushima (屋久島) is an UNESCO World Heritage Site famous for its rainy, almost mystical charm. Attractions include ancient cedar trees over 1,000 years in age, and lush, mossy forests that became the inspiration for Hayao Miyazaki’s Princess Mononoke. Try one of the hiking trails in Shiratani Unsuikyo (白谷雲水峡) or Yakusugi Land (屋久杉ランド) to enjoy the beautiful forests of Yakushima.

Here is some information about getting into and around the Kyushu region.Fukuoka is one of Japan’s busiest transportation hubs with excellent connections throughout Japan and other regional countries. If you are travelling to Kyushu from Tokyo, taking a flight is the fastest way to travel and the costs can be cheaper than taking a train (flights with discount fares can be less than 20,000 yen and take about 2 hours, whereas trains take at least 5 hours and the standard tickets are over 20,000 yen).

Even so, train is still the transportation mode to go when it comes to travelling around the region. Kyushu has an extensive train network which often makes travel from one place to another within the region simple and direct. Hakata Station (博多駅) in Fukuoka is the gateway to many other places in Kyushu, and can easily be reached by shinkansen train from Osaka.

Tourists on “temporary visitor” visa who are going to use the shinkansen train extensively while in Kyushu may consider getting one of the Kyushu Rail Passes (North, South, or all Kyushu) which allows unlimited travel on all JR Kyushu lines (except Sanyo Shinkansen) for 3 or 5 consecutive days. Holders of Japan Rail Pass can also travel the region using the pass given that it is valid on JR’s railway network nationwide.

Finally, cities and towns in Kyushu are served by various modes of transportation such as trams, trains, subways, buses, and ferry services. Nevertheless, taxis, guided bus tours, and rental cars are recommended and convenient when visiting more outback and off-beaten places where public transport is infrequent.

There you have it, an overview of attractions in Kyushu by prefectures. Down in the south, Kyushu is a wonderful charming part of Japan where in reality, there are far more beautiful places to visit and interesting things to explore (well-seasoned Japan travellers would have known this). It is a destination not to be missed by any travel enthusiasts, so the next time you plan for a trip to Japan, give Kyushu a go and you most probably won’t regret it!

*Always check the status of access before visiting any volcanoes as they may be closed to public anytime due to volcanic activity.