Tottori: The place to meet Supernatural Beings from GeGeGe no Kitaro

Unique train rides on Shikoku Island No ratings yet.

Shibazakura, little flowers that would charm your heart No ratings yet. 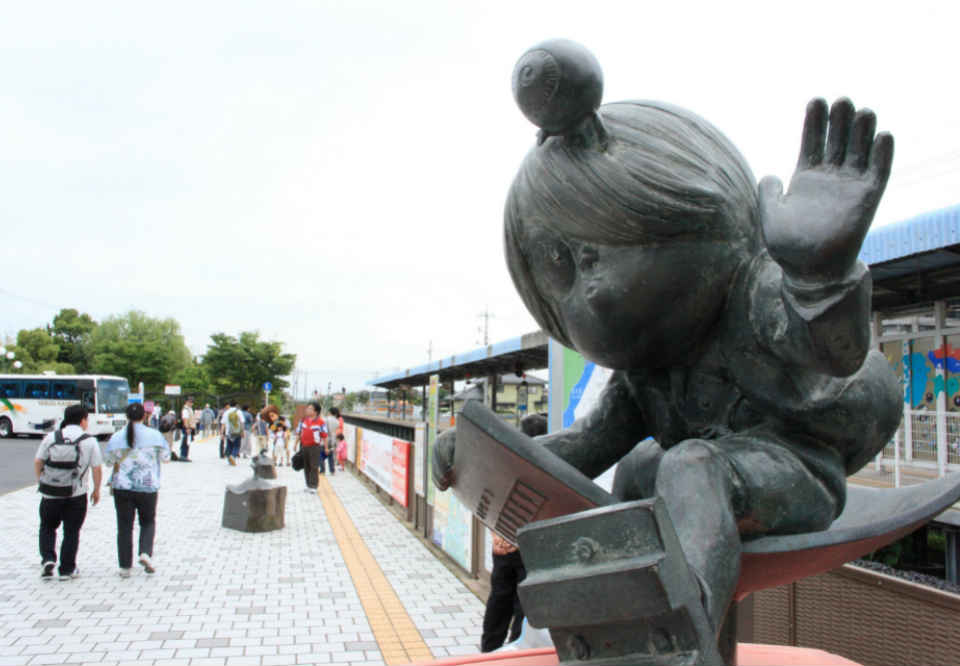 Are you fascinated about yokai 妖怪? A travel to Tottori might be just for you.

Yokai are supernatural creatures that often appear in Japanese folklore. Not really monsters and not quite ghosts, they come in many shapes and forms, and possess a variety of powers and abilities that bring fortune and misfortune to people’s lives.

In the classic manga series called GeGeGe no Kitaro ゲゲゲの鬼太郎 by Mizuki Shigeru (1922 – 2015), it tells the story of Kitaro, a yokai boy, and his adventures with other supernatural creatures from Japanese folklore.

Serialized in Japanese manga magazines from 1960s right into the 1990s with six anime adaptations to date, the series is the epitome of manga and anime with a yokai theme and has a broad fan base that spans across generations. 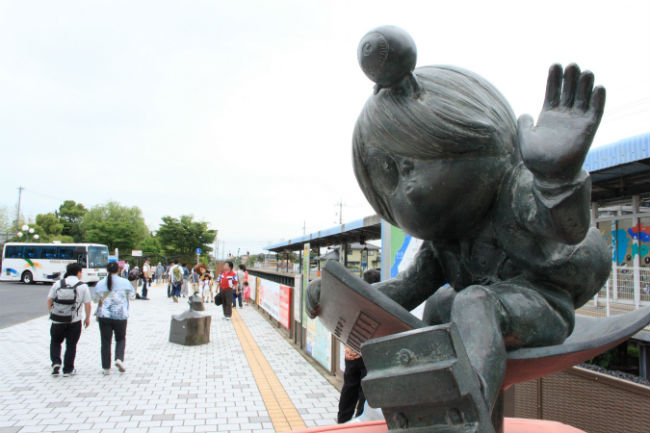 A statue of a character from GeGeGe no Kitaro.

The port town of Sakaiminato 境港 in Tottori Prefecture is a paradise for the fans of GeGeGe no Kitaro or anyone interested in Japanese yokai. It is the hometown of Mizuki Shigeru and you could experience the world of this legendary manga artist and his yokai creations the moment you step out of the train.

In this article, let’s find out about the popular attractions in Sakaiminato that centred around the theme of this manga series. 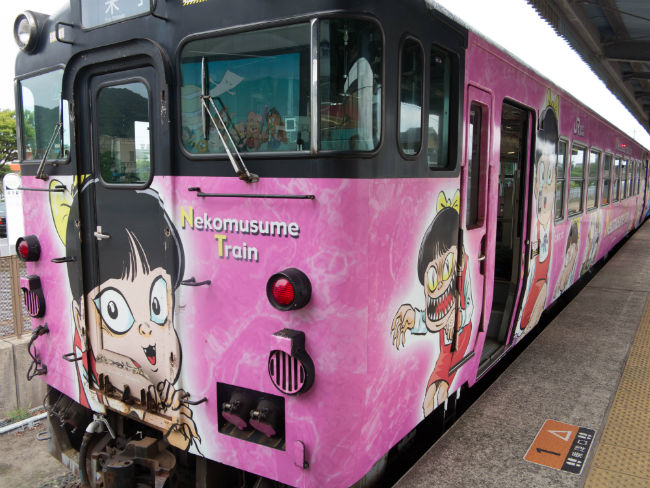 Entering the fascinating world of Japanese yokai would first require a train ride. Start your journey by taking one of the yokai character trains from Yonago Station to Sakaiminato Station on the JR Sakai Line 境線. JR Sakai Line is a local train service dedicated to the characters of GeGeGe no Kitaro. The trains are decorated with the images of yokai inside out, with all of the 16 stations named after the yokai in GeGeGe no Kitaro. There are 6 car designs to date, including Kitaro, Neko Musume, and Nezumi Otoko.

2. Mizuki Shigeru Road: A Street Occupied by an Army of Yokai 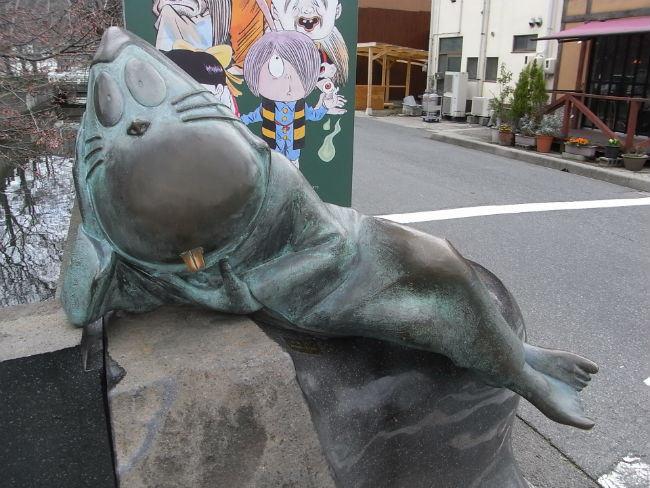 The 800-metre stretch of road, starting from right in front of the JR Sakaiminato Station, is literally a street occupied by the yokai characters from GeGeGe no Kitaro. Not only are there over 150 bronze statues of the yokai dotted all over the road, take a closer look at your surrounding and you will notice that yokai are basically everywhere – in the form of street lamps, on roof of a taxi, and even on manhole covers! 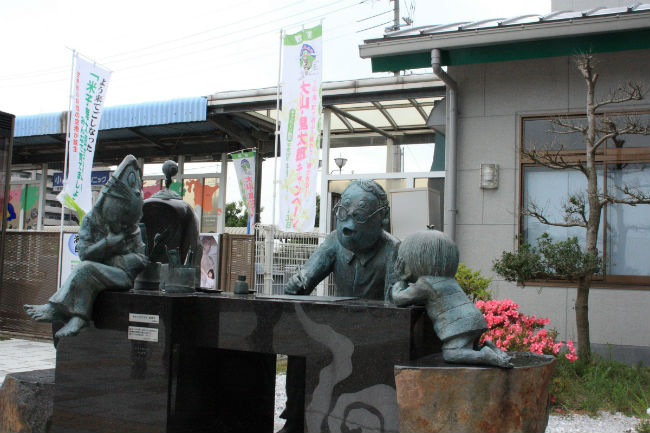 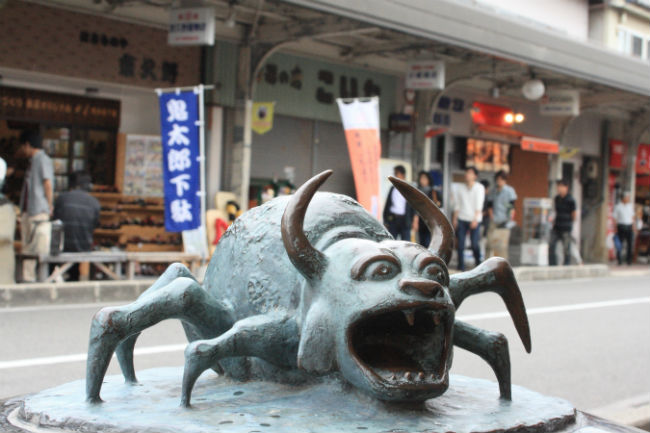 Adult and children alike would have fun taking part in the stamp rally, whereby participants collect yokai stamps at various spots around the road to receive an exclusive gift from the Sakaiminato Tourist Information Office.

While collecting the stamps, you can always enter the shops to browse the myriad of Kitaro goods and souvenirs that can only be bought here. Otherwise, you can dig in at one of the eateries offering various food and drinks with yokai motif beside Sakaiminato’s specialty seafood dishes. Last but not least, you can also stop over at structures such as the Kappa Fountain, Yokai Shrine, and Yokai Post for more photo opportunities! 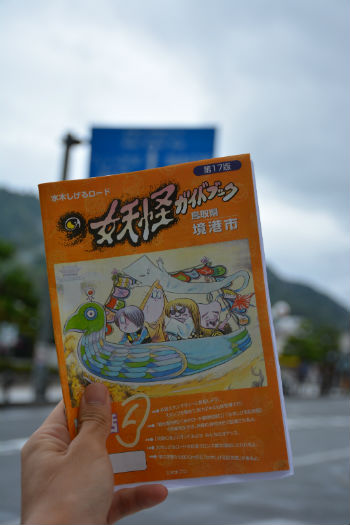 Get a copy of Yokai Guidebook to start the stamp rally
Image credit: Cheng-en Cheng on Flickr / CC BY-SA 2.0 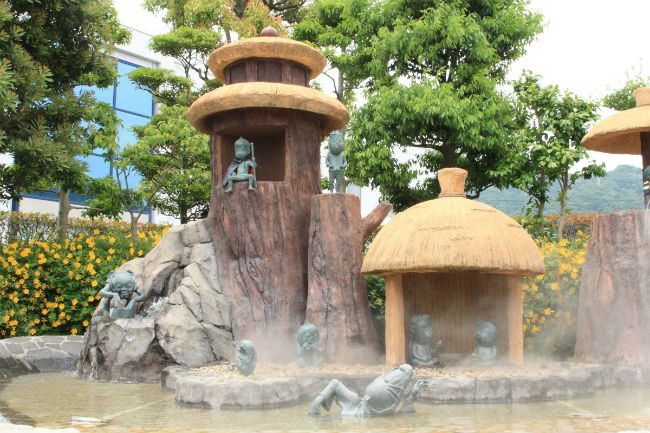 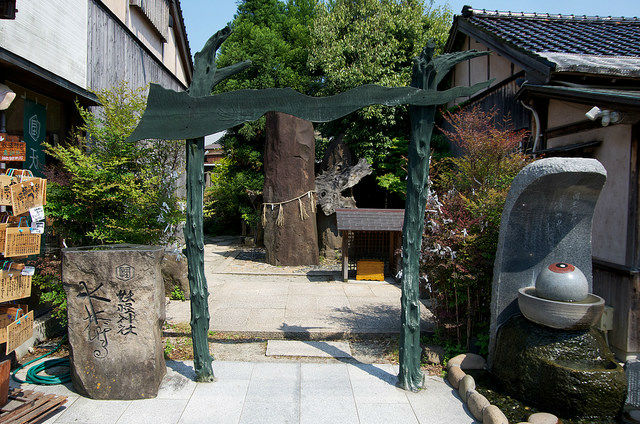 You might also encounter the characters of GeGeGe no Kitaro greeting the visitors along the road, so don’t miss the opportunity to take pictures with them! The bronze statues along the road are lit up at night, so if you happen to wander around the street until it gets dark, you can experience a wholly different atmosphere from that of in the daytime. 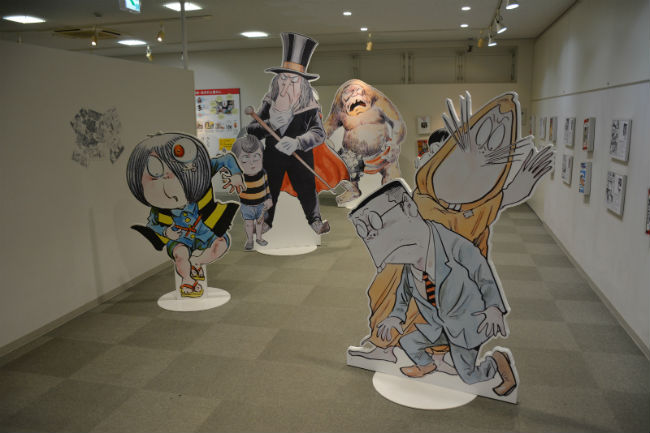 Reaching the other end of Mizuki Shigeru Road is the Mizuki Shigeru Museum which is just as interesting and recommended for anyone who is interested to learn about Mr. Mizuki’s life, works, and yokai.

Divided into different sections, the museum is dedicated to Mr. Mizuki’s not just as a manga artist but also as an ex-soldier, mythical creature scholar and traveller. Among the displays not to be missed are the replica of his workspace and a collection of his valuable works, ranging from illustrations, articles, to research material about supernatural creatures that Mr. Mizuki collected from all around the world.

Yokai also forms a considerable part of the museum’s exhibitions. Apart from yokai dioramas, walking through the yokai cave which gathers a host of ghostly creatures that appear in Mr. Mizuki’s works is sure to be an experience you cannot get elsewhere in the country. Just a reminder though, it can be quite scary for some children. 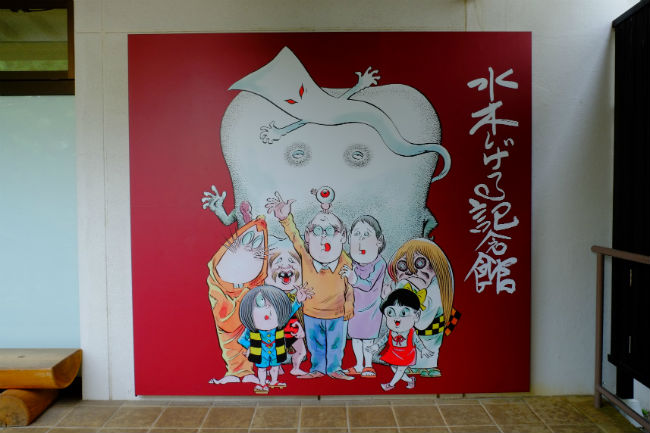 I hope you enjoy reading about the yokai related attractions in Sakaiminato this time. Revolving around GeGeGe no Kitaro and its author Mizuki Shigeru, they are surely worth a visit for a bit of understanding about the spookier side of Japanese culture.

Don’t worry if you don’t know about GeGeGe no Kitaro because you can still have fun just like many others do. But do note that some children may find the yokai terrifying, so you may want to make sure that your kids are comfortable with the attractions before visiting.

Lastly, if you wonder how yokai can be turned into a pop culture phenomenon in Japan, I recommend you to find the answer from the GeGeGe no Kitaro series. Its latest season of anime is set to out in 2018 (interestingly, one new anime adaptations every 10 years since 1968) so there is your chance to catch the wave! 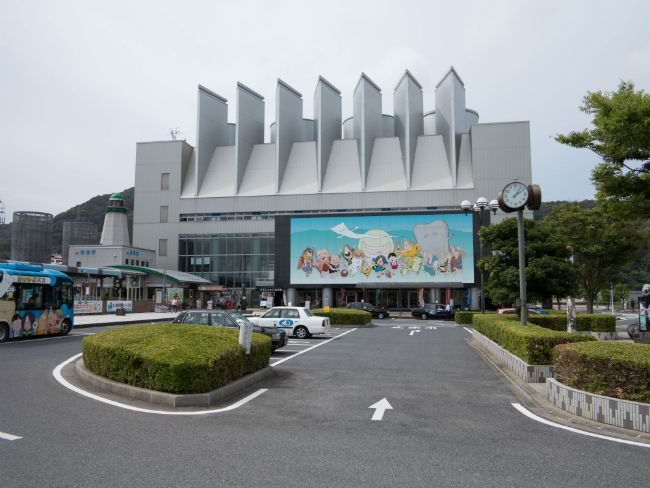 Take the JR Sakai Line (mentioned above) from Yonago Station to Sakaiminato Station. From Tokyo, Osaka or Hakata, Yonago Station is accessible by train with a transfer to the JR Hakubi Line 伯備線 at Okayama Station.

Around the Sakaiminato Station is bus terminal where the city of Matsue is only a bus ride away; there is also ferry terminal where ferries to the Oki Islands can be taken.

Given the proximity between Sakaiminato and Shimane prefecture, visitors often pair it with other popular destinations in the region such as Matsue, Izumo, and Oki Islands which I’ve written previously.

Sakaiminato Tourist Information Center 境港市観光案内所
Opening Hours: 9 AM – 6 PM (Mar to Oct), 9 AM – 5 PM (Nov to Feb)
Access: Located on the 1st floor of Minato Sakai Exchange Center みなとさかい交流館 which is next to JR Sakaiminato Station 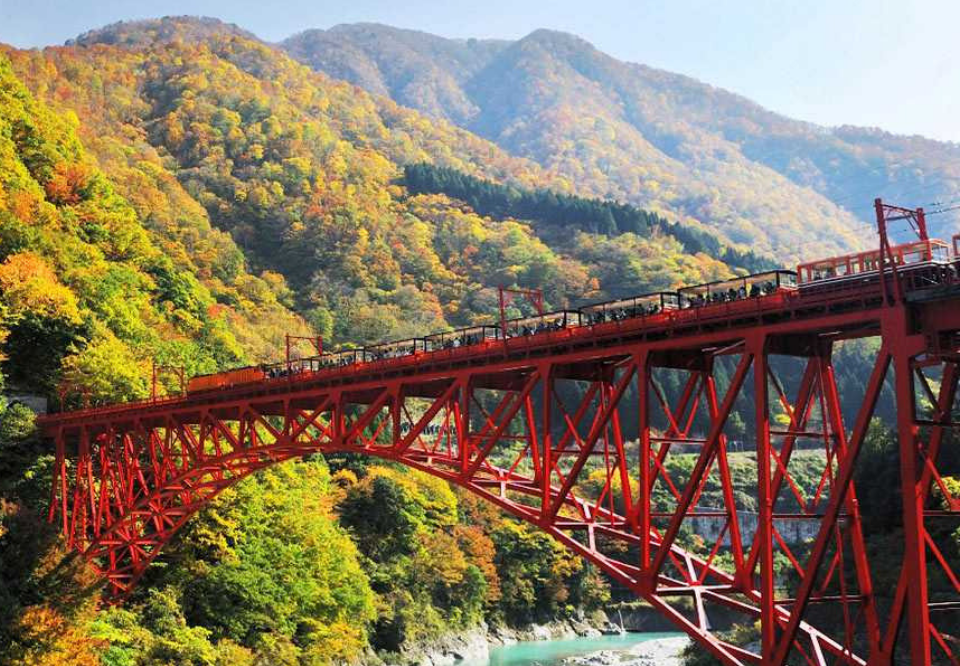