Survive in Japan with only 1,000-yen for food each day No ratings yet.

Tips for visiting Tokyo Disneyland and DisneySea No ratings yet. 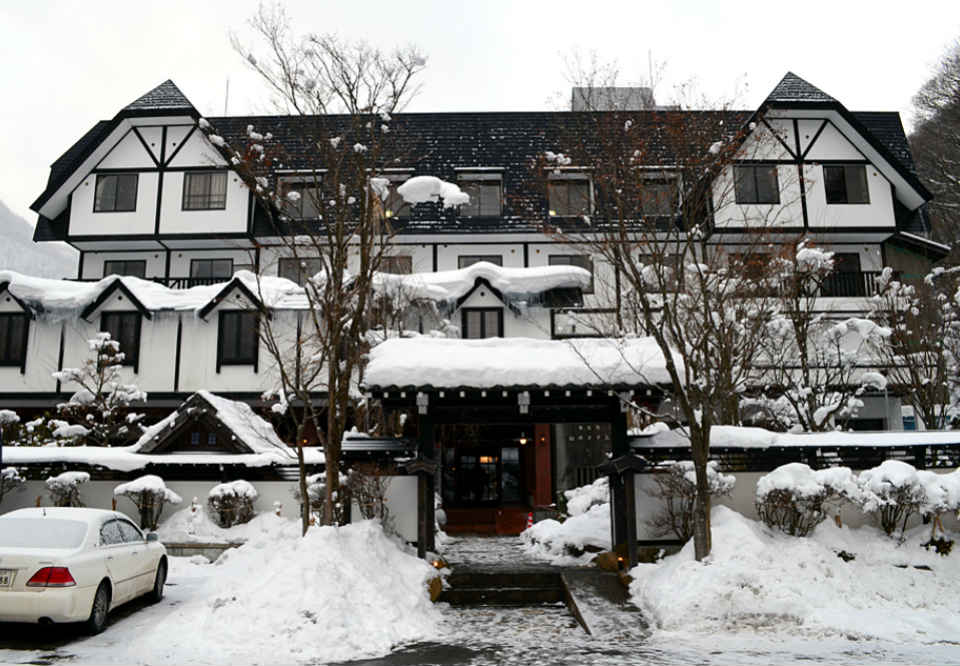 Onsen has been a growing demand among the new generation travellers, and some may want to experience a true Japanese onsen. In one of my past trips to Japan, I stayed at a pure traditional Japanese onsen or hot spring hotel in the Gifu prefecture, located in the Chubu region of Japan.

The Shin-Hotaka Onsen Yamano Hotel, or Yamano Hotel (in short), is owned by a Japanese who is also a Malaysia My Second Home (MM2H) citizen. Because of this, the owner is well versed with Malaysian travellers heading to this part of Japan, and understand Muslim travellers’ needs. 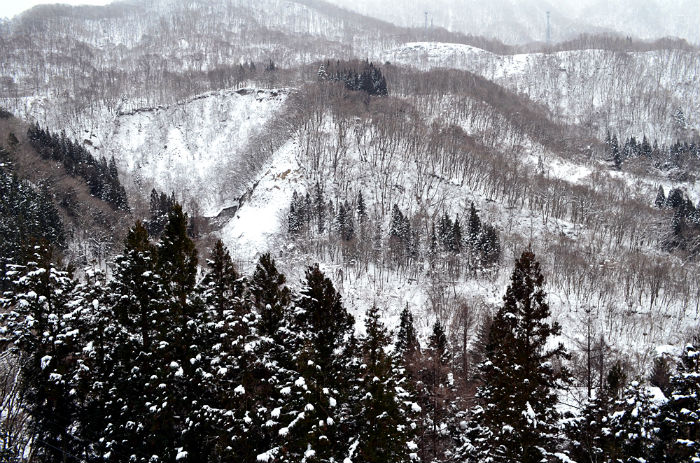 The beautiful winter time view from my room window of the hotel.

This semi-luxurious property is not your modern concept resort or hotel, but more of a nostalgic and evergreen concept, which has been around for many years. Located in the mountains of Okuhida Onsengo, this resort takes its theme from the Northern European ski resorts, similar to those found in the Swill Alps.

There is a total of 86 rooms at the Yamano Hotel, where 50 of them are Western-themed, and the remaining 36 rooms are traditional Japanese-styled rooms. However, the main selling point for this hotel is the traditional onsen, which has a direct source of hot spring water from the mountains here.

Each Japanese room comes with the standard Tatami mats, and it can fit up to four or five persons. These rooms also come with beautiful views of the Northern Japanese Alps. 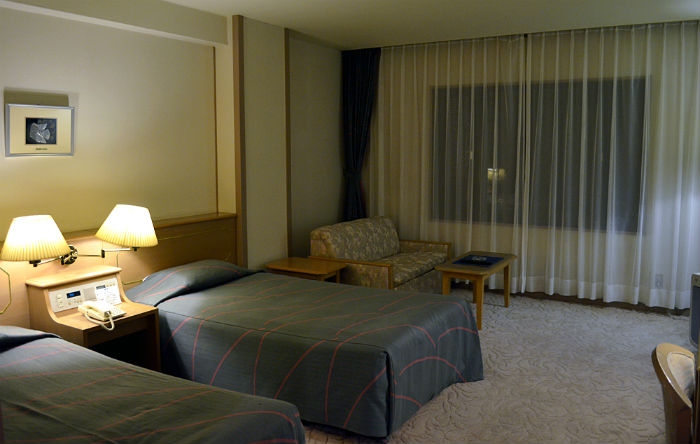 The common standard room which I stayed in while I was here.

The regular rooms are similar to any other hotel room, but in a timeless state which reflects the 90’s concept. They are available in standard or deluxe rooms.

The highlight of the rooms at the Yamano Hotel is the Shikitei Rooms, which come with a Japanese terrace, and your own little onsen in the room. This is luxury at its finest for those wanting a traditional Japanese onsen experience. 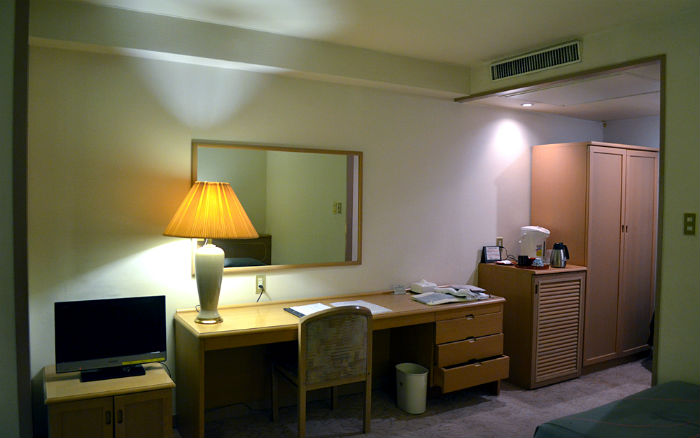 Functional and simple, which is what some visitors prefer when travelling. 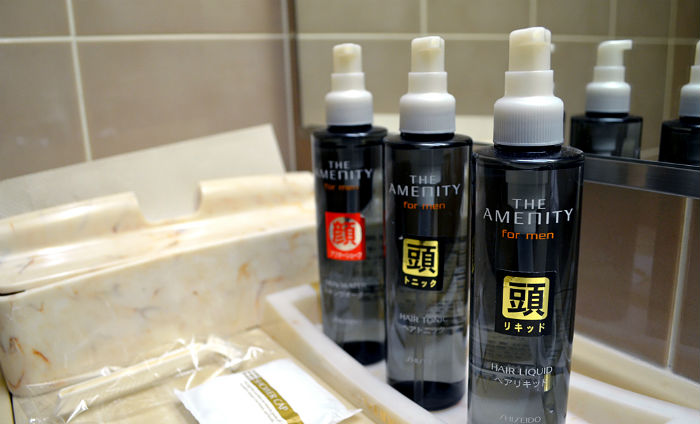 One thing I liked in the room is the men amenities available.

Facilities at the hotel are also complete as there is a restaurant, nightclub, function and ballrooms, swimming pool and even a well-stocked souvenir and general goods store.

Perhaps one of the prominent features is found in the main lobby area, which has a very medieval mood lighting. During winter, which is one of the best seasons to stay here, you can see guests cuddling up around the many fireplaces around the lobby area. 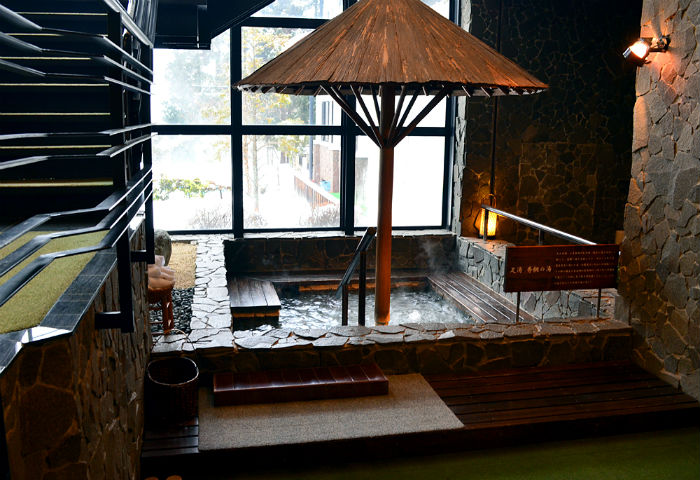 The free foot onsen at the lobby area of the hotel.

You will also be surprised to find a Japanese foot onsen in the main lobby area. Guests can utilise this for free, especially after a long day exploring the surrounding area. If you prefer to spend more time at the hotel, some of the breathtaking sceneries from your room or lobby area will ease anyone’s stress. This includes picturesque views of the Japanese snow-covered mountainside during the winter and of course, the lush greenery during the summertime. 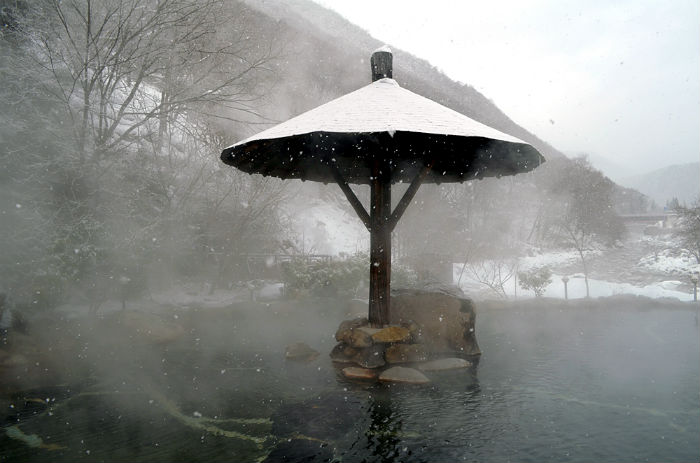 Winter at the mixed open onsen with snow falling.

The hotel provides three different kinds of Japanese onsen. Muslim travellers are also in for a surprise as the owner understands their needs. Below are the types of Onsen offered here;

One of the few places in Okuhida that offers the choice of enjoying an open-air onsen which is shared by other guests. This style allows both males and females to simmer themselves in the hot spring in an open area, complete with beautiful scenery. 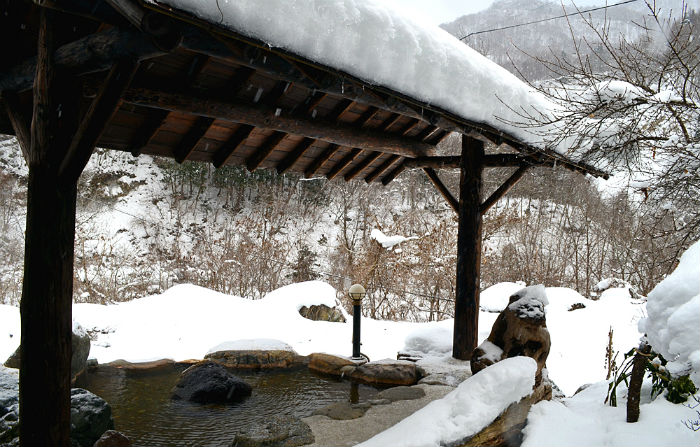 Another covered open-air onsen at the hotel, in the thick winter.

For those wanting a little privacy, there is the private onsen available namely for couples or families. This is suitable for Muslim family travellers as you have the entire bath just to yourselves or your family. The baths are surrounded by natural landscapes, rocks and trees.

3. Men and Women Only Onsen

This is suitable for those who prefer to experience Onsen without the opposite gender present. These gender-specific onsens are available in both indoor and outdoor baths and come complete with gender-specific saunas as well. 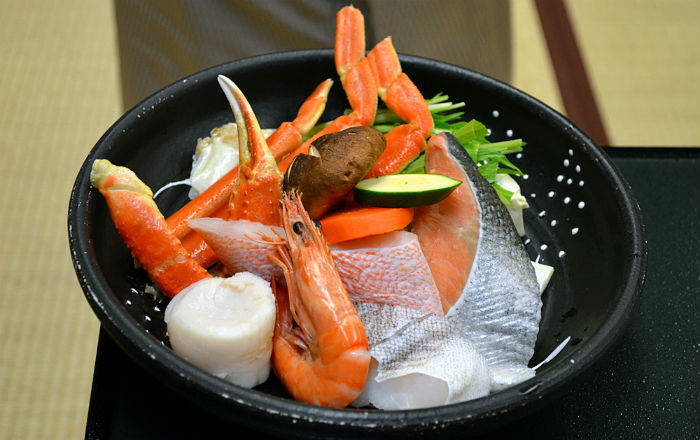 Fresh seafood at its best is served to hotel guests.

The Suzuya restaurant in the hotel is quite well known as one of the best places to experience the famous Japanese Hida Beef. However, for Muslim travellers, the restaurant is not 100% halal, but if you inform them in advance, they can provide a pork-free Japanese meal for you.

Their chefs prepare some very interesting Japanese cuisine, which will guarantee that you whip out your smartphones to take photos. Their presentation is very impressive, and everything looks beyond fresh. You can expect the best of Japanese Kaiseki cuisine in this part of Japan. 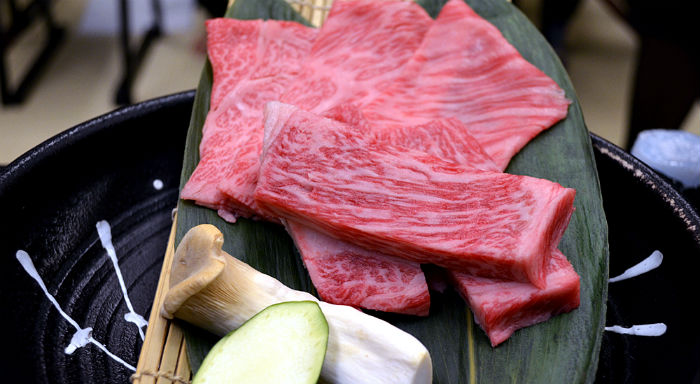 Choices include a lot of seafood and Hida Beef, which comes in various methods of cooking. During my stay here, I was overly impressed with my Hida Beef shabu-shabu dish.

That was my first time tasting the famous beef, and it was beyond my imagination. The beef literally melted in my mouth, and that alone is enough to say how nice Hida beef is. 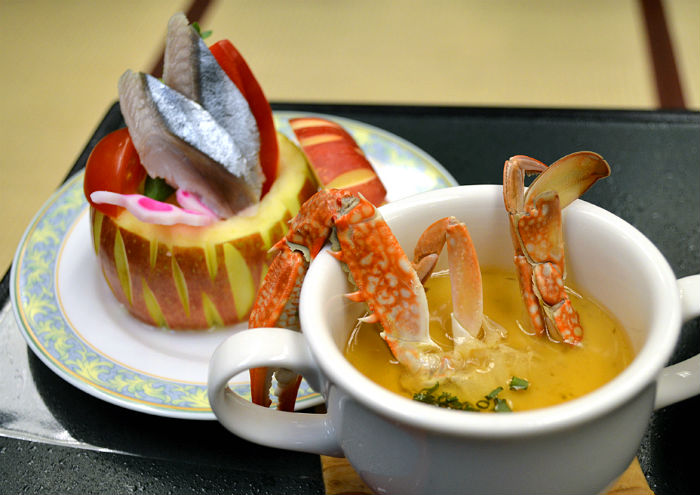 A Japanese crab soup and a unique apple sushi dish. 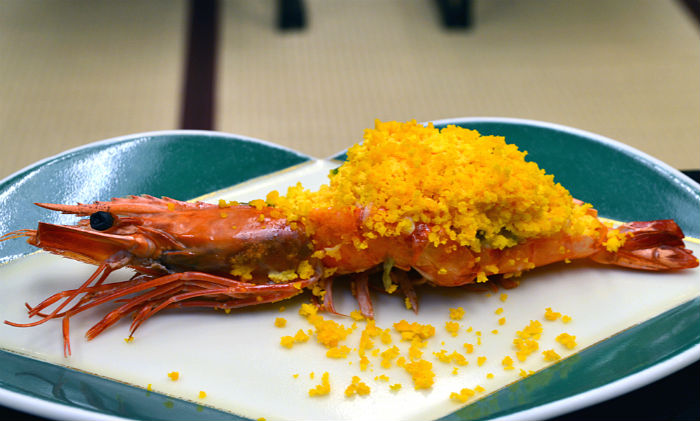 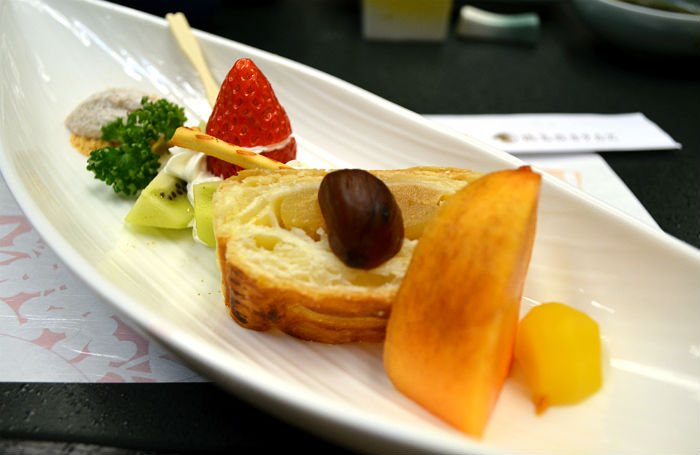 If you travel with kids, they also have a special kid’s menu. For guest staying at the special Shikitei Rooms, you can arrange for a unique Japanese in-room dining experience.

One thing that everyone should try here is the Onsen Tamago or hot spring full boiled eggs, which is done at the hotel. To be very honest, the onsen boiled eggs taste much better than the conventional ones.

Around the Yamano Hotel

While staying here for the onsen, there are a number of things that you can do in this area, namely outdoor, nature and culture experiences. Perhaps you may have heard about the world famous Shirakawa-Go UNESCO world heritage site? It is located about 100 minutes’ drive from the hotel.

Other places of interest include the historical Takayama Old Town, Matsumoto Castle, Shin-Hotaka Mountain Ropeway, and the world-famous Tateyama Kurobe Alpine Route, where they cut through the 10-meter-deep snow to open the main highway. 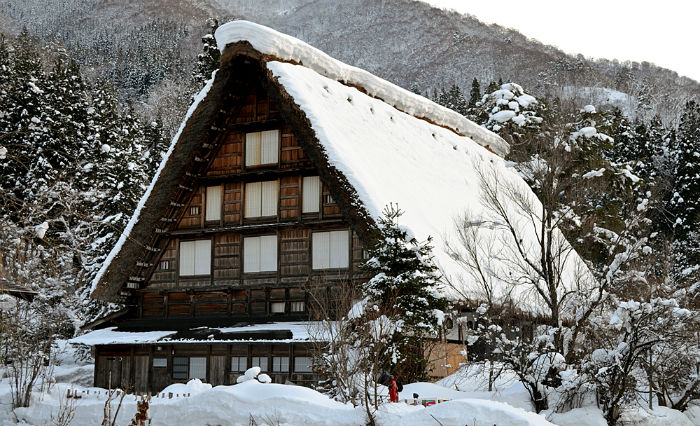 The beautiful homes at Shirakawa-Go.

There are of course many other attractions suitable for those seeking a different side of Japan and is also suitable during any time of the year. However, the winter period is the most popular time that visitors prefer. Please note that you will not find the famous Japanese Snow Monkeys here.

For those interested in visiting this part of Japan, the hotel welcomes all nationalities but they do not have English speaking staff. For seasoned travellers like me, I always find it a challenge to stay in this kind of places.

The cross-cultural experience leaves great memories, and this is one way of doing it. Sometimes, language and communication bring out the best in people when trying to communicate, but eventually, it always works out. So, if you are the type of traveller who wants everything your way, then I would not recommend visiting here. But if you are the adventurous and curious type who wants to experience a different culture and way of life, this is one of the highly recommended places in Japan to visit.