My Journey to Matsumoto (Part 1) No ratings yet.

Sample Itinerary for JR West Pass No ratings yet. 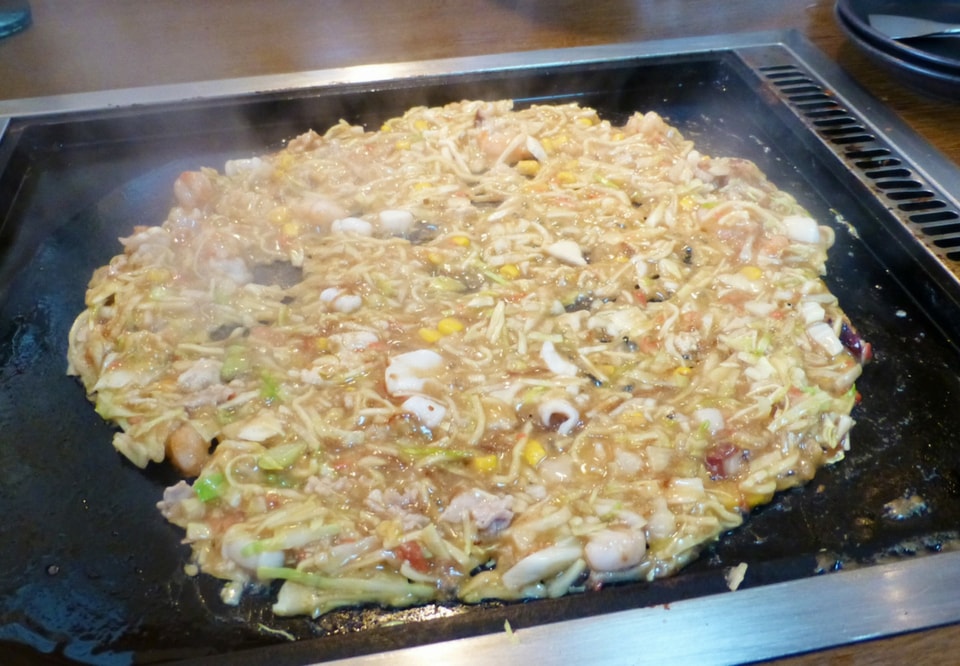 If you are a fan of Japanese food, you most probably have tried “okonomiyaki”, also referred as “Japanese pizza” before, but did you know that this savory pancake is often being compared to another dish called “monjayaki” in Japan?

Okonomiyaki and monjayaki are Japanese-style pancakes that are very popular among the general public. In terms of origins, okonomiyaki is mainly associated with the Kansai region, oftentimes Osaka, and to a lesser extent Hiroshima, while monjayaki is Tokyo’s and to a larger extent Kanto region’s interpretation of how a batter dish should be.

This article is about these two humble yet delicious Japanese comfort foods. Read on to find out their differences, where to eat and how to cook these all-time favourite foods!

To say the least, okonomiyaki and monjayaki are both savoury pancakes cooked on a griddle. Comprising a batter made from flour, vegetables, meat, seafood, and various other ingredients, they may sound similar but in actuality are very different.

First, let’s talk about okonomiyaki, which means “grill as you like it”. 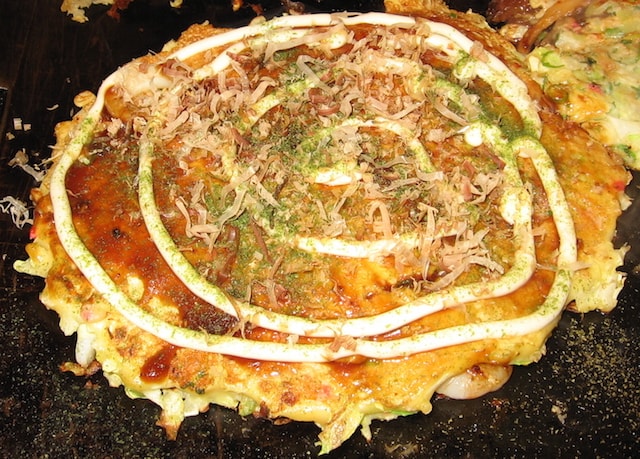 The basic Kansai style okonomiyaki usually comes with batter, grated nagaimo yam, egg, shredded cabbage, and optional toppings such as pork and squid. It is made by mixing together all the ingredients and shaped into one big pancake when cooking, after which it is topped with okonomiyaki sauce and mayonnaise. 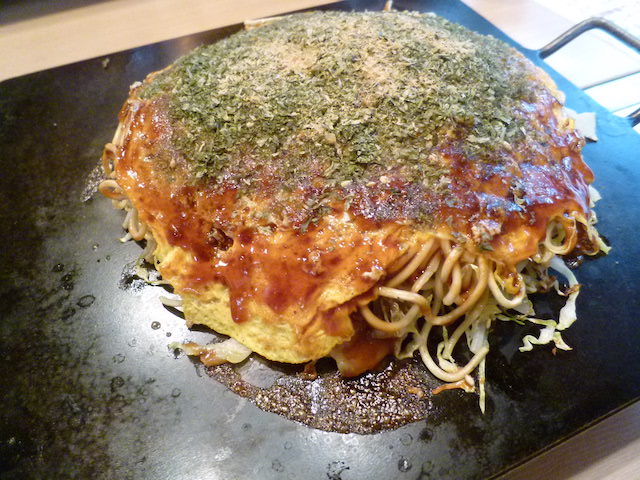 The Hiroshima-style okonomiyaki is about “layering” than “mixing”. The ingredients are added according to sequence, starting with a thin crepe-like base, followed by cabbage, sprouts, then sliced meat and other optional items. It is sometimes also topped with noodles and fried egg to make a complete satisfying meal. The thick, round patty is then finished with okonomiyaki sauce and aonori (seaweed powder).

Next is monjayaki, often known as “monja” by the locals. 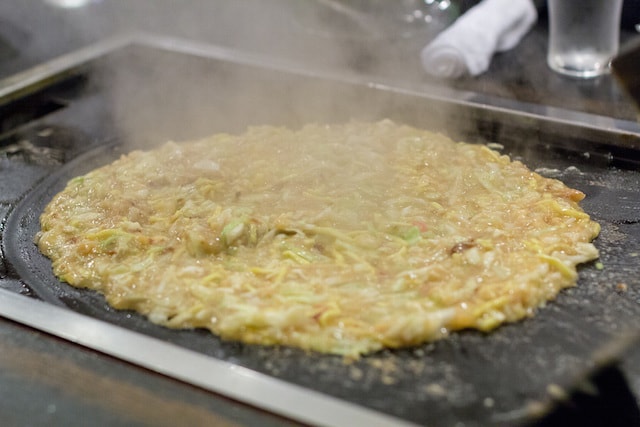 Monjayaki takes an entirely different appearance from okonomiyaki: it is thin, flat and never comes close to look like a pancake, and certainly does not look appetising. Anyway, don’t let its looks fool you because monjayaki is delicious! This delicacy started out as a snack for poor children during post-war Japan, it is today a favourite among the Tokyoites from young to old.

The main difference between monjayaki and okonomiyaki is the batter which gives a different end result when cooked. Monjayaki is like a pan-fried batter, which in the beginning is very runny but is let reduced and thickened with other ingredients until achieving the gooey consistency of porridge or congee in the end.

It is made by stir-frying the ingredients first before adding the batter and letting the mixture simmer on the griddle until ready to eat. The thin batter of monjayaki contains no eggs and is made from flour and dashi stock or water.

Where to Eat Okonomiyaki and Monjayaki

Although okonomiyaki is to be Osaka’s signature dish, Tokyo is easily the place where you can have both okonomiyaki and monjayaki. 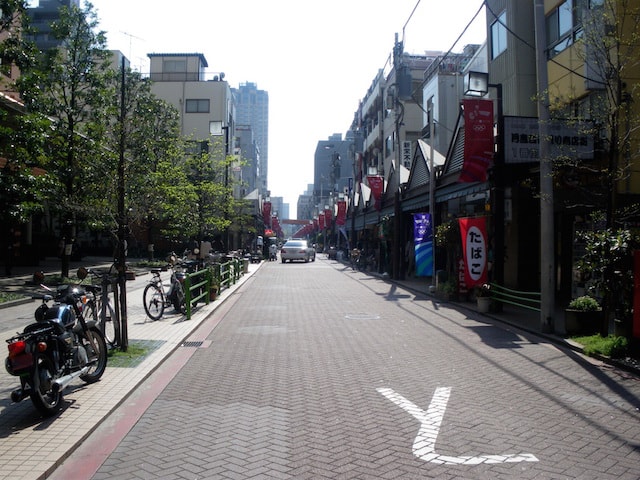 Monjayaki is known to be a specialty of Tsukishima, an artificial island on Tokyo Bay where you can find a street lined with over 70 monjayaki restaurants called Monja Street! The charming old neighbourhood of Asakusa, famed for its Sensoji Temple, also has many restaurants specialising in monjayaki. Most of these monjayaki restaurants also serve okonomiyaki so you are able to enjoy the best of both worlds! 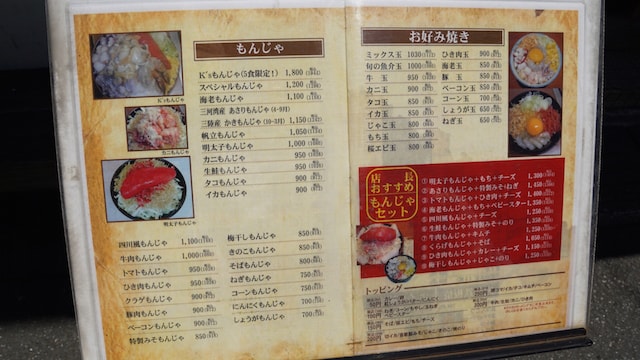 Example of a menu.

To order at these restaurants, you select what you would like to have from the menu, which comprises of different sets of ingredient combinations. To give you some ideas, some of the popular combinations for monjayaki include mochi with mentaiko and cheese, tuna with corn and bacon, buta kimchi (pork and kimchi), and the popular curry monjayaki!

You can also add your favourite ingredients individually or even custom make your own monjayaki or okonomiyaki by choosing and pairing different types of ingredients available. Among the ingredients commonly on the list include pork, shrimp, squid, cheese, corn, green onions, mentaiko, mochi, and so on. 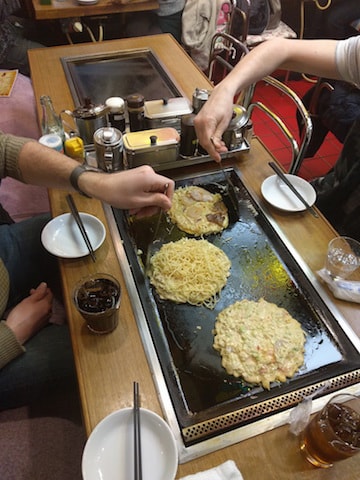 While there are restaurants where the cooking is done by the chefs at the counter right in front of the customers, many of the monjayaki and okonomiyaki restaurants let their customers prepare their orders on their own with the griddles installed in the tables.

In case you find yourself in a restaurant where you need to do the cooking and did not know how to do it, don’t worry because you can always ask the staff for assistance. Moreover, the experience of cooking it yourself is actually the fun part about eating these Japanese-style pancakes! Just follow the guideline below: 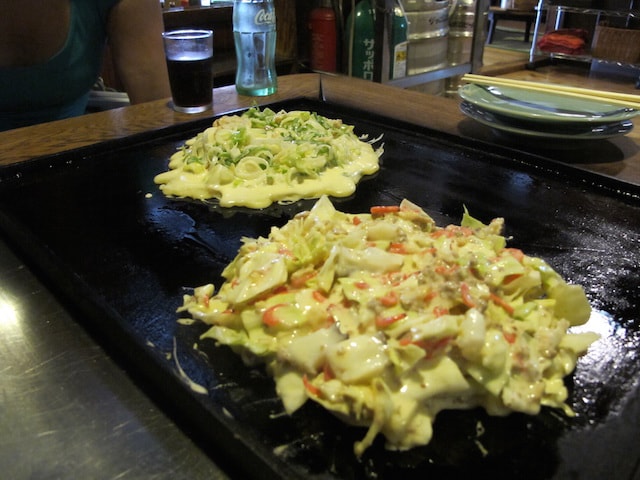 Your order will come as a bowl with all the ingredients in it. Mix everything up, grease the grill and pour the whole mess onto it, spread the mixture into a round shape using spatula. Place any additional toppings on top. 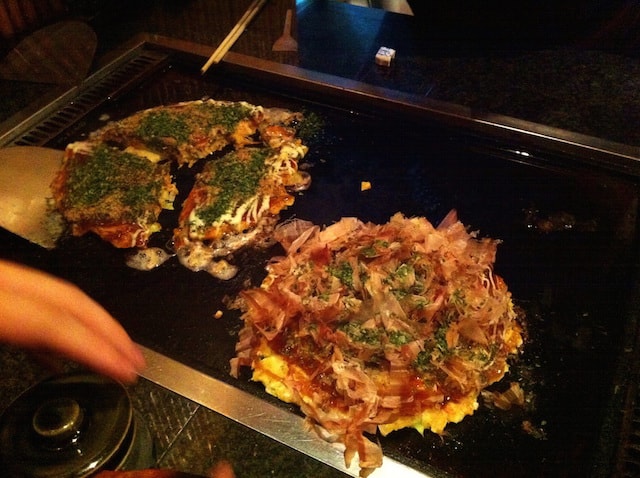 After a few minutes when the bottom is browned, flip the pancake over and cook the other side for a couple more minutes until done. Finish with sauce, aonori, and bonito flakes, cut into sections like a pizza, and eat!

Your order will come as a bowl with all the ingredients in it as well, but the cooking part is very different from cooking okonomiyaki so pay attention to the following steps! 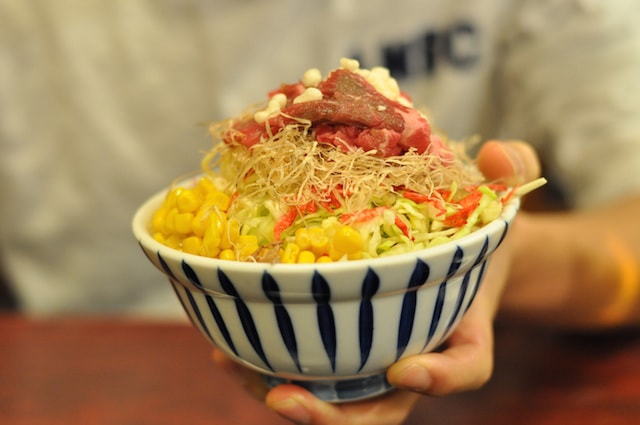 Inside the bowl, there are the main ingredients (vegetables, meat etc.) at the top and the watery batter at the bottom. Do not mix them up together like you would an okonomiyaki.

Grease the grill, place only the main ingredients (do not pour the batter just yet) onto the grill. Stir fry the ingredients until semi-cooked and the cabbage starts to soften. Use metal spatulas to cut the ingredients into smaller pieces to speed up the process. 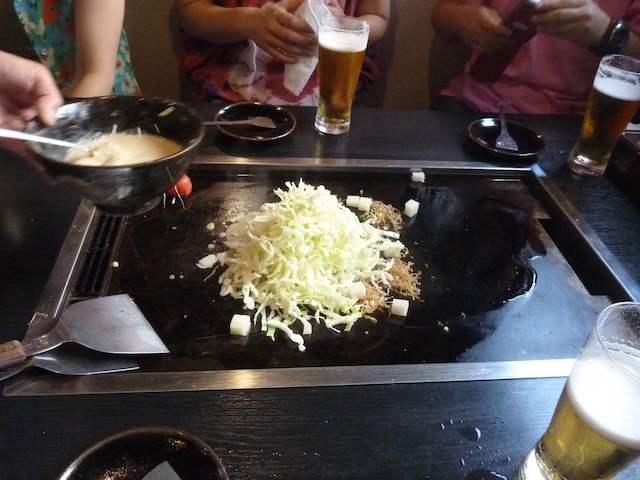 Make a hole in the middle of the ingredients (like a circle), arrange neatly so not to leave any space around the circle. Slowly pour the batter into the hole, do this in two or three parts so to keep the circle intact and not overflown by the liquid. 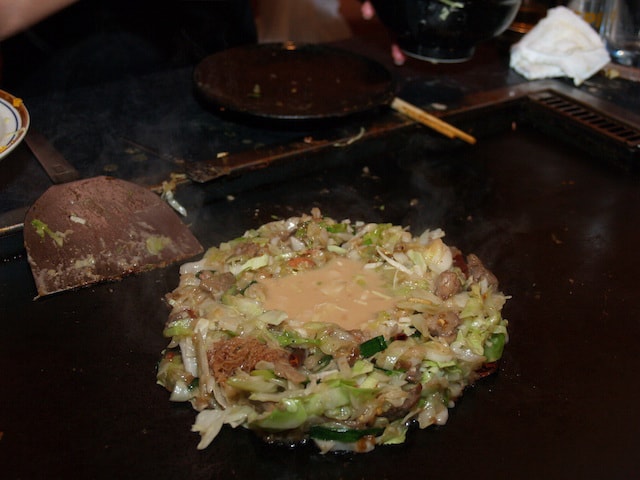 When the batter boils and starts to reduce, break the circle and mix everything together, spread the mixture thin and flat across the griddle. You can add the cheese at this point (if any). 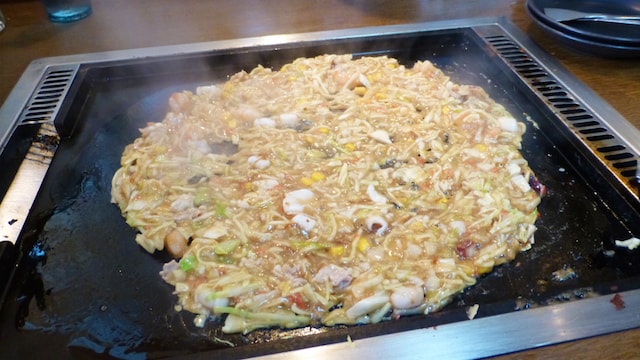 Once the liquid is reduced and the monjayaki gets firmer, turn the heat to low and it is time to dig in! Monjayaki is meant to be eaten while it is a little gooey so don’t leave it sitting!

Using the tiny spatula provided, scrape the monjayaki off the griddle and eat! Be careful as the mixture is still hot. 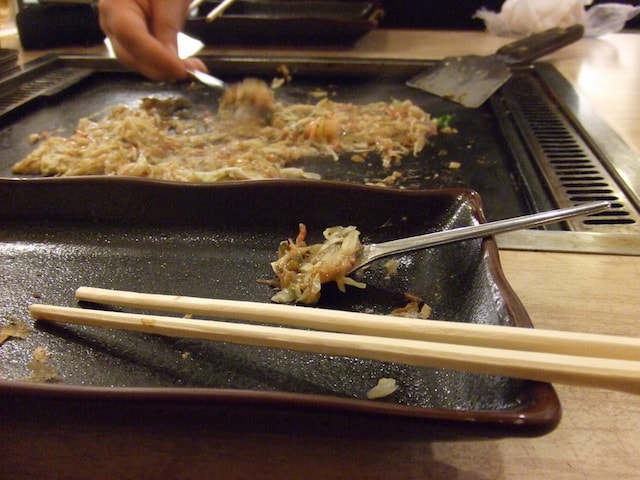 As you eat the monjayaki, it continues to brown and crispy parts called “okoge” form underneath and around the perimeter of the liquid. Don’t waste the okoge because it’s considered the best part of monjayaki!

Well, what do you think after reading this article? Between monjayaki and okonomiyaki, which one do you prefer? I’m sure they are delicious in their own way, do try both and discover which one is your favourite during your visit to Tokyo!