Kagawa, probably the place to get the best Udon in Japan No ratings yet. 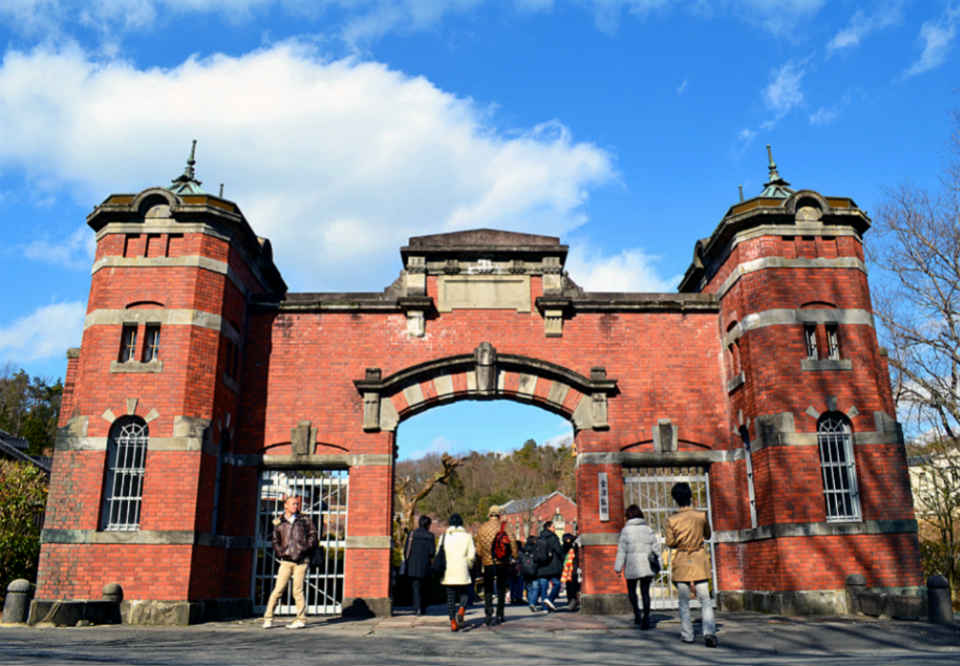 In the Chubu region of Japan, there are many unique places worth exploring, depending on what type of experiences you are seeking. The Chubu region is located at the centre of Japan, on the island of Honshu, where Tokyo and Osaka is also located.

Most travellers may have already explored the Kanto Region where Tokyo, Kyoto and Osaka are situated, but there are many new travellers that are starting to explore further. Aichi in the Chubu region is one of the up and coming places, and in this article, the Meiji Mura Museum will be the highlight of this prefecture. 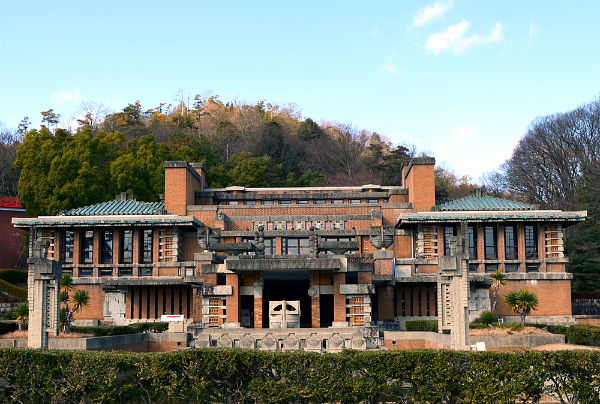 The facade of the famous Tokyo Imperial Hotel.

Before you continue, you may be wondering what is the Meiji Mura? It is actually the period when Japan opened its doors to the western world and accepted the western culture and technology in the early 1900’s.

This is where a lot of western influence is seen in the Japanese architecture during the Meiji period and beyond. Some call this ‘When the East Looked West’ era, so do not be surprised when you see non-Japanese structures from other countries here. 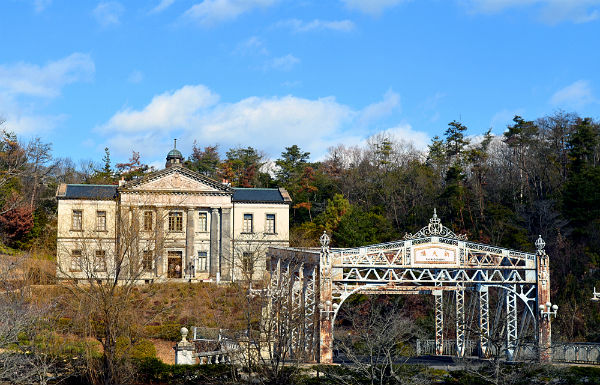 A Meiji era school at the back of an old steel railway bridge.

Over 60 different buildings are here in this massive open-air museum, which is uniquely one of a kind in Japan. The name comes mainly from the Meiji period of 1867-1912, where Emperor Meiji ruled during that time.

Overall, there are also other buildings from different periods like the Taisho period (1912-1926), and also the Showa period (1926-1989). A majority of these historic buildings were either moved here and reconstructed to showcase Japan’s diverse architectural heritage. 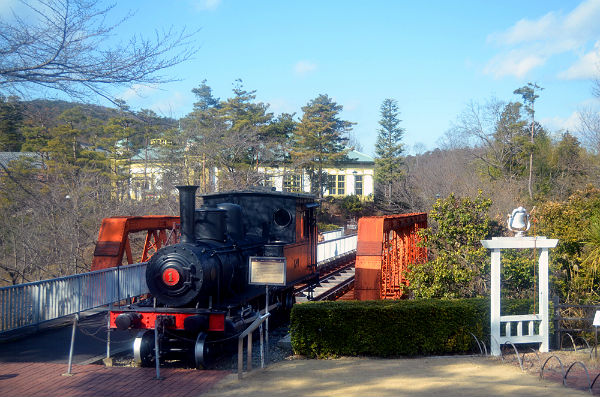 The steam locomotive that is still in operation here.

The Meiji Mura Museum also serves as a different kind of theme park which is suitable for all walks of life. The main area is located just by Lake Iruka, where all the buildings are situated. In total, there are 67 heritage buildings spread all over the museum and park grounds.

There are five main areas around the Meiji Mura Museum, and are simply called area one, two and so on until five. There are also two entrances here, and the main entrance is at the south gate, which is called the main entrance. All buses will arrive here, for those travelling by public transport. 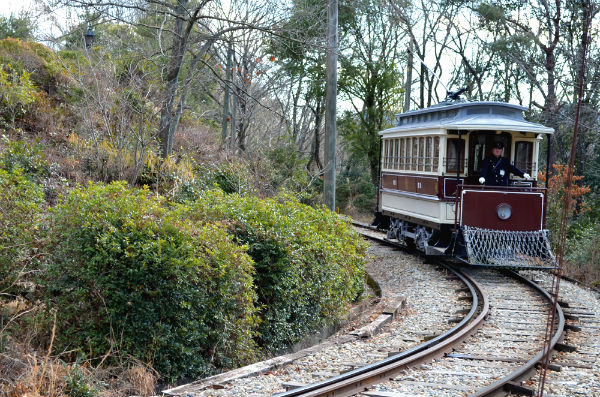 A classic Japanese Tram or Street Car from the early 1900’s.

The beauty of this place is that it suits those who want to see a different side of Japan. If you love beautiful landscapes, well-manicured gardens and buildings or structures from the Art Deco era, you can find these here.

There are also rides, but not your general theme park roller coasters and merry-go-rounds, instead, you will find the authentic steam train and historical street car rides. Yes, those old Kyoto street cars or trams are used here and are still well maintained. Visitors can jump on them and move around the museum if they are too tired to walk. 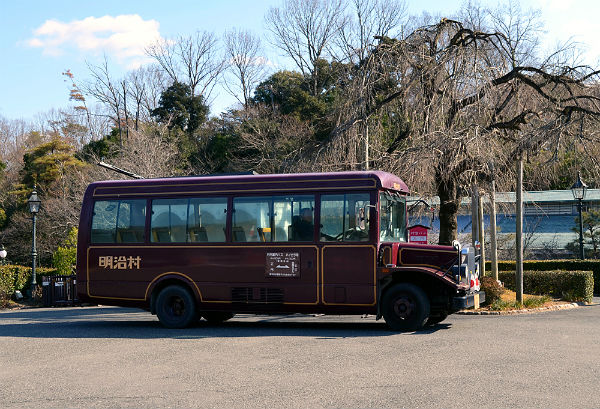 Classic Meiji era bus that is used to shuttle visitors around the park.

For the locomotive fans, an authentic steam locomotive will take visitors around the lake for a journey of a lifetime. Visitors can board steam locomotive No.12 during selected hours for this ride. There is also the local village bus that shuttles visitors to various spots around Meiji Mura Museum.

Overall, you can spend around two to four hours here, and if you love photography and architecture, you may even spend up to half a day here. Facilities are complete, meaning you can find authentic Japanese restaurants, cafes, coffee shops and even souvenir shops.

For me, I was fortunate to have spent about two hours due to a tight schedule, but I managed to see some of the star attractions of this beautiful place. 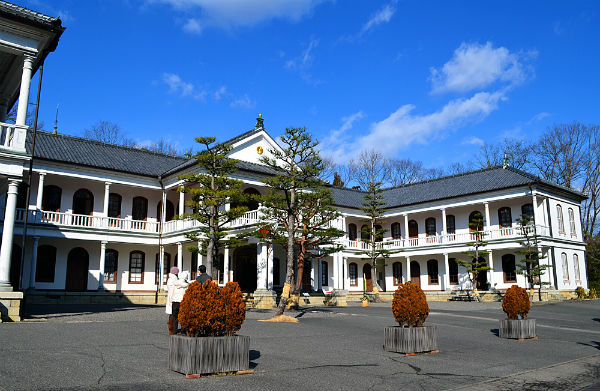 The Mie Prefectural Office with symmetrical sides, built in 1879

Among the highlights of visiting here, visitors should explore the Rokugogawa Steel Bridge that is over a hundred years old. This is also the oldest railway bridge in Japan, that was brought here and reconstructed.

A number of century-old train factories are also seen around the museum. At the railway memorial, there is even Emperor Meiji and Shouken’s imperial carriages on display, which are intricate and fit for royalty.

Some of the other interesting buildings include St. John’s Church, which was originally built in Kyoto in 1907 that displays Roman and Gothic designs. Another is the St. Paul’s Church which resembles a farmhouse type of church with Gothic influence and was built in 1879. 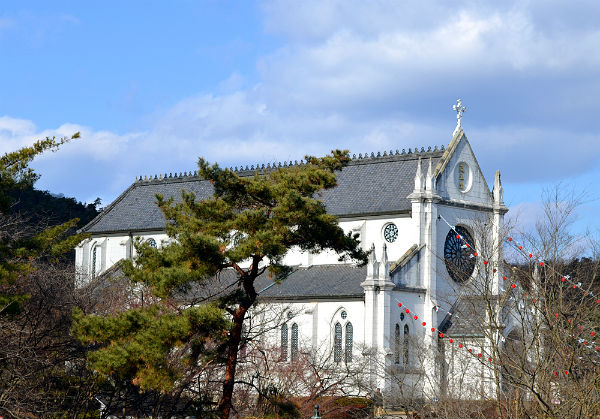 St. Francis Xavier’s Cathedral, built in 1890 and in Kyoto.

The most beautiful place of worship is no other than St. Francis Xavier’s Cathedral which was originally built in 1890 and in Kyoto. The massive cathedral is also themed after a traditional Gothic design with large windows.

For visitors who want to fully experience and feel this unique era, there is even a shop where you can rent Meiji period costumes, and walk around. I would call this the Meiji Cosplay, which would be perfect for your social media photos. 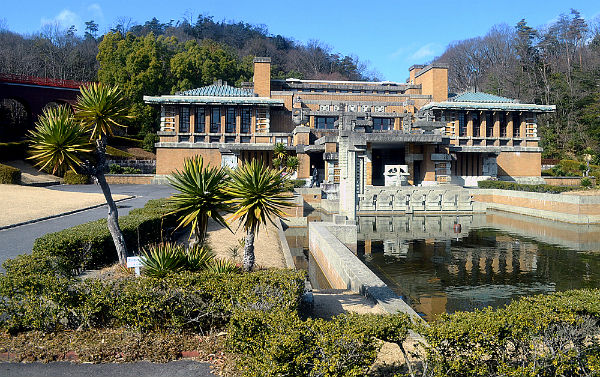 The beautiful entrance of the Tokyo Imperial Hotel

Some of the heritage buildings are open to the public where you can walk in and see what it looked like inside during the Meiji era. But some of them are closed and you can still see them from the outside.

For me, the main highlight was seeing the famous Tokyo Imperial Hotel, which was built by world famous architect Frank Lloyd Wright. The original building was demolished in 1968, but it was rebuilt again at Meiji Mura to showcase the main entrance hall of the famous hotel.

Finally, when you explore this place fully, you will come across an old post office from the Meiji era, a traditional Meiji township, old sake making factories, schools and many other important governmental buildings. 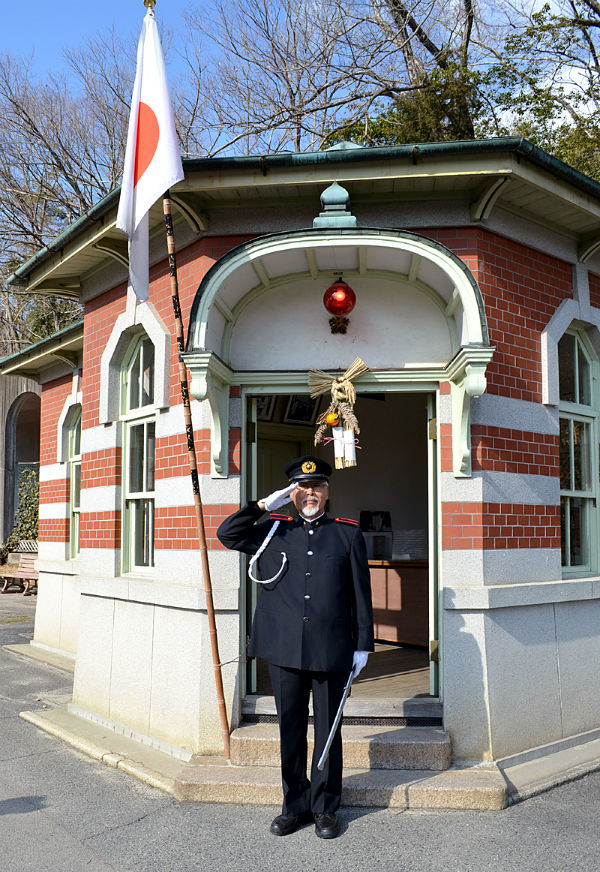 Meiji Mura actually stands for Village of Meiji and was officially opened in 1965 by the Nagoya Railroad Company. In the beginning, they only had 15 heritage buildings, and by 2009, a total of 68 buildings were transported and reconstructed. 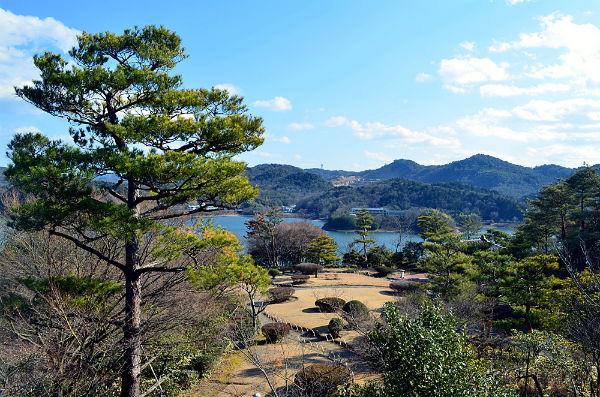 A beautiful view of Lake Iruka from a restaurant at Meiji Mura.

In the 60’s, Japan was going through an economic growth where old buildings were being demolished to make way for modern buildings. It was then that the Nagoya Railroad Company started to build the museum to preserve the culture of these heritage buildings.

Today, Meiji Mura serves as one of the important places for Japanese history and attracts many visitors to their open-aired museum. You can get English brochures and the staff here speak good English. 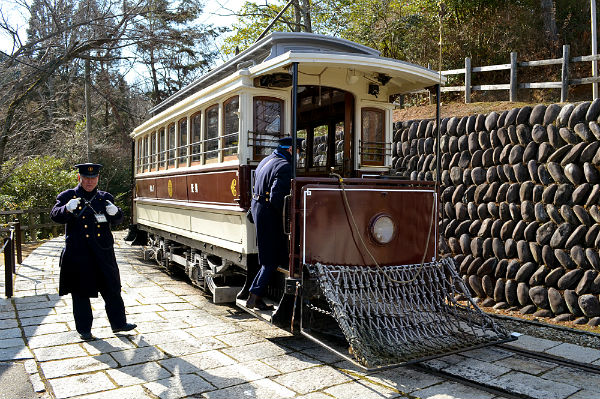 The Kyoto Street Car that takes visitors on a tour around Meiji Mura Museum.

How to get to Meiji Mura Museum?

Take the Meitetsu-Inuyama Line to Inuyama Station, and then take the Gifu Bus to Meiji-Mura Seimon-mae stop. Total journey is about 60 minutes.

At the terminal, there is the Inner-city Express Bus Tokaido Line that goes directly to the Meiji-Mura Seimon-mae stop. This journey will take about 80 minutes.