Meet Wisteria, the second most famous flower to Sakura in Japan

Simplify your travel with these 7 packing hacks 5/5 (1) 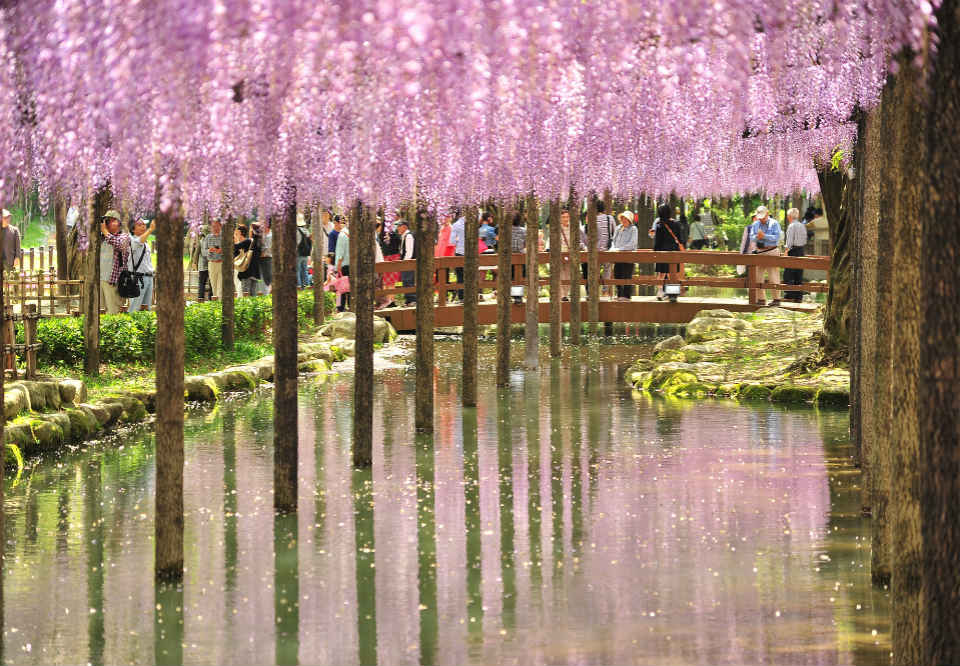 Spring in Japan is always a festival to celebrate the blooming of sakura or cherry blossom, but little did travellers know it is also the season for other beautiful flowers to blossom and show its beauty. This also means that there is also no need to fight your way through such crazy crowd at sakura viewing spots – Woohoo!

In Japan, the wisteria flower is becoming increasingly popular with foreign tourists. Wisteria grows out from long drooping vines and looks a little similar to Shidarezakura (also known as the weeping sakura). Its colour normally ranges from pink to different variations of purple, but there are some that come in yellow and white colour too.

Now, where and when can one expect to see this flower in Japan? Wisteria generally blooms from late April to early May across the country, and here are 5 places of recommendation for wisteria viewing. Some are located outside of major cities, but it’s worth the effort to travel there. 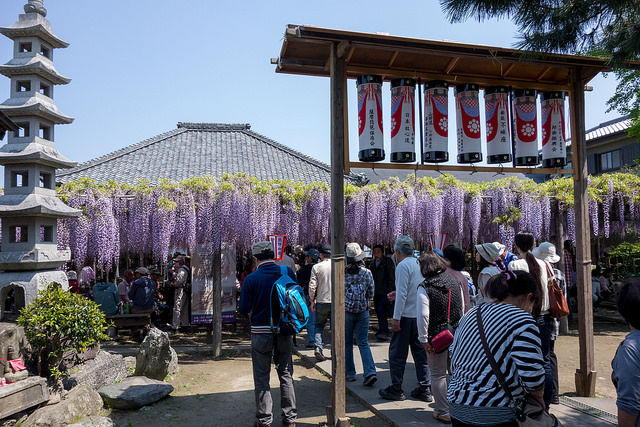 A view from the outside.
Image credit: nubobo on Flickr / CC BY 2.0

Yuya no Nagafuji is located in the grounds of Gyokoji Temple. Apparently, wisteria has been around for a very long time as it is said that that the wisteria trellis here is more than 300 years old. There are wisteria vines here which is at least one metre long – creating a beautiful and elegant view as you walk underneath the ceiling trellis. Entry to this garden is free of charge, so make the best out of this opportunity to view the flowers! 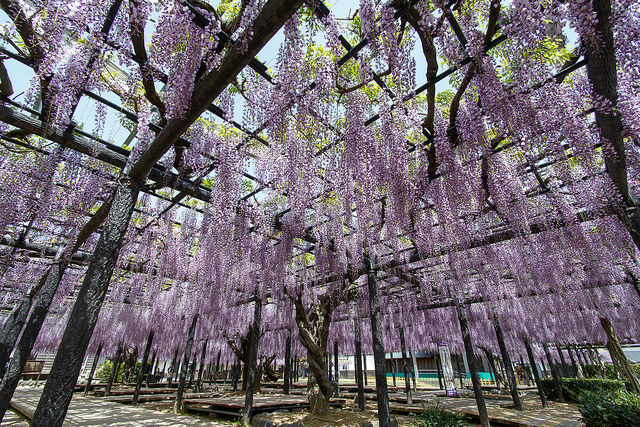 A view of the inside.
Image credit: nubobo on Flickr / CC BY 2.0 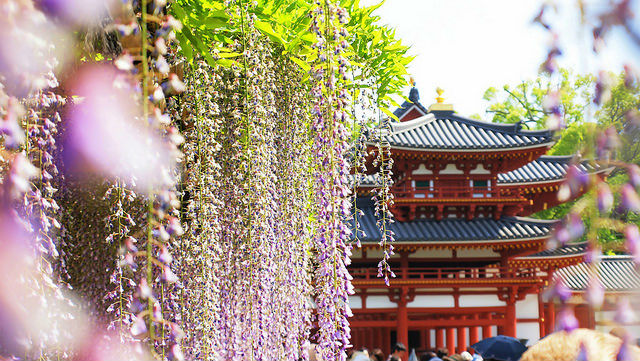 Wisteria with Phoenix Hall in the background.
Image credit: coniferconifer on Flickr / CC BY 2.0

As much as there are temples to view sakura, there are also temples graced by wisteria’s beauty. One of such place is the Byodoin Temple located in the charming Uji City of Kyoto. Inside, you could find wisteria trees planted around the Pheonix Hall. When the trees are in full bloom, the view of purple wisteria and hall in a single picture is simply beautiful. Do take note that the admission fee here is inclusive of the entry to the Byodoin Temple Museum, so you could kill two birds with one stone here! 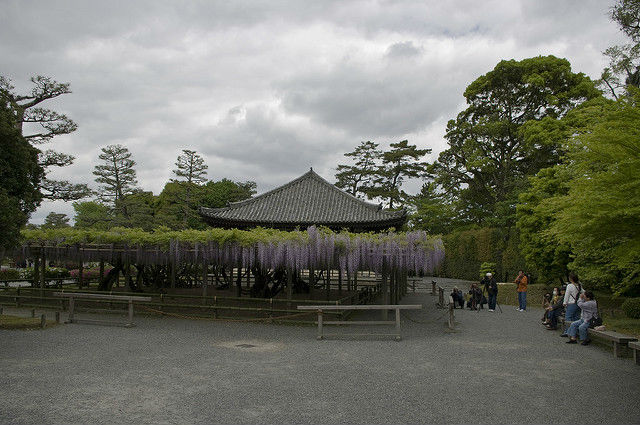 Wisteria on the trellis inside the temple grounds.
Image credit: SnippyHolloW on Flickr / CC BY-SA 2.0 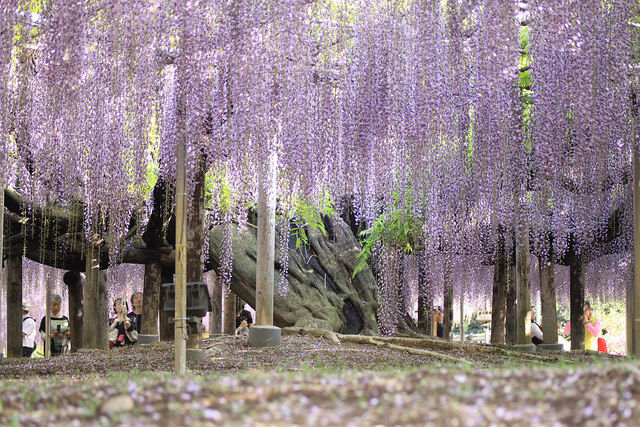 Ashikaga Flower Park is a better-known wisteria park located just about one and a half hours drive from central Tokyo. Popular among Tokyoites and those staying near the Tochigi Prefecture, the Great Wisteria Festival or Fujinohana Monogatari Outo Matsuri is an event you should go if you are serious about viewing wisteria. This park boasts 350 wisteria trees that come in a variety of colours which are pale red, purple, white and yellow. Some of the attractions here include the 150-year-old great wisteria and the night illumination. 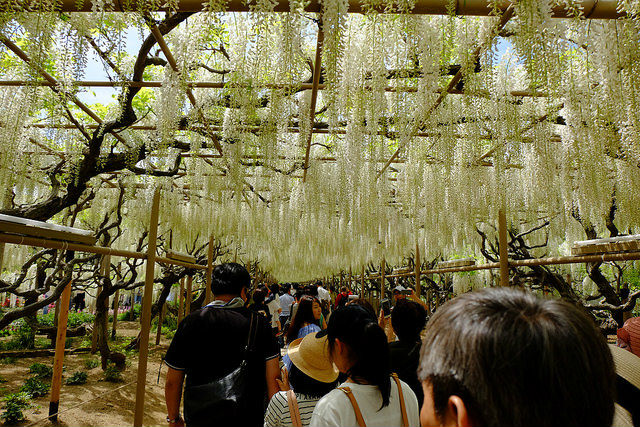 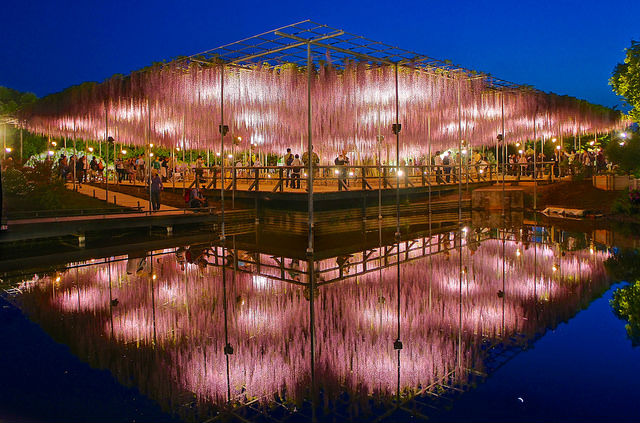 A view of Skytree from Kameido Tenjin Shrine.

If you are a busy person or simply didn’t have time to travel outside Tokyo to view flowers, Kameido Tenjin Shrine would be your best choice. Just two-kilometre walk away from the iconic Skytree is this perfect shrine to view beautiful wisteria. The shrine grounds turn into a beautiful place when spring comes and the sakura and wisteria are in bloom. It’s actually pretty cool to know there’s a location in Tokyo to enjoy viewing wisteria amidst the hustle and bustle of city life!

A post shared by Japan Seasons (@autumnspringwintersummerjapan) on Nov 26, 2017 at 7:40am PST

There is a small bridge inside the shrine grounds.

Last but not least, who could forget about the infamous Wisteria Tunnel in Kawachi Fuji Gardens? The beautiful and fairytale-like flower tunnel is located in northern Kyushu, western Japan. If all the previous wisteria viewing spots didn’t get you thinking that you are in a dreamland for a second – this one will. Its fame attracts international and domestic visitors annually, so it could get very crowded during peak season, just to give you a heads up. I would recommend you to purchase a ticket beforehand at FamilyMart or Seven-Eleven.

A different part of the garden.

Are you intrigued by nature’s beauty? Now you know what you can do besides viewing sakura in spring! Wisteria may not be as popular as sakura, but it is nevertheless a flower with grace and elegance in its own right.