12 Things You Need to Know About Noh, Japan’s Ancient Musical Drama No ratings yet. 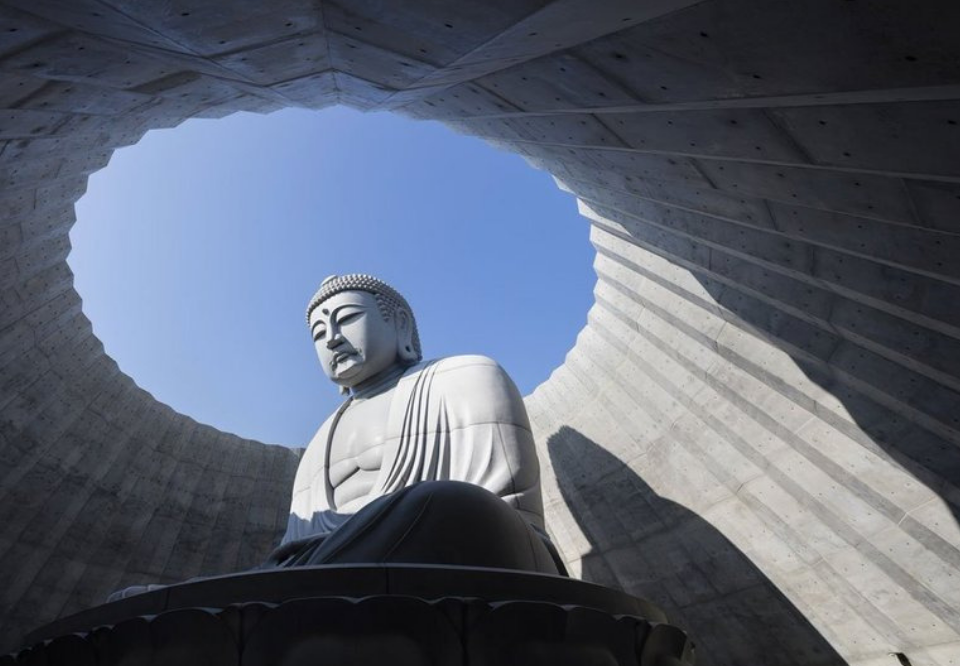 Speaking of cemeteries, many people will get spooked and always see it as an eerie place, especially at night. What if we told you that you can visit a non-eerie cemetery that is surrounded by lavender flowers, Moai Heads and a Stonehenge, only in Japan?

In Sapporo, there is this place called Makomanai Takino Cemetery. It is also known as Hill of the Buddha. Yes, a cemetery that was beautifully designed by world-renowned architect, Tadao Ando. He is also known as ‘King of Concrete’ as a reference to his works. This self-taught Japanese architect has designed many aesthetically unique and unconventional structures all over the world namely in New York, Paris, Budapest and countless notable buildings in Japan. 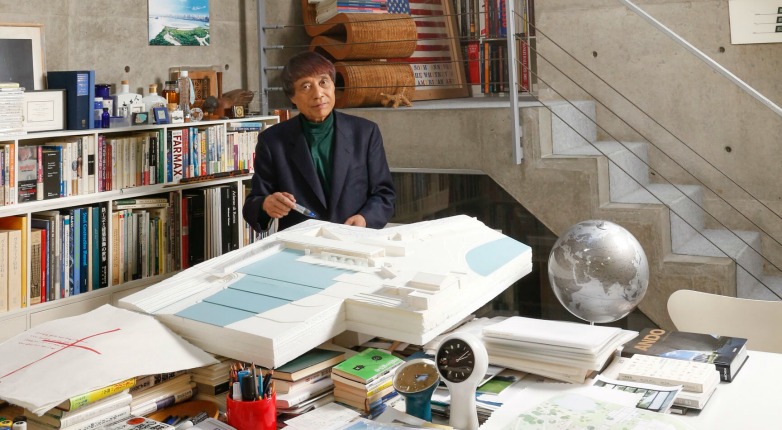 His architectural works have been regarded as “critical regionalism” which means that it contradicts the norm of architecture by building unproportioned spaces in a structure. You can view some of his astonishing works all over Japan, such as Church of the Light (Ibaraki Prefecture), 100 Stepped Garden of Awaji Yumebutai (Hyogo Prefecture), Chapel on the Water (Hokkaido), Omotesando Hills (Tokyo Prefecture) and more. Tadao Ando has won a prestigious award called Pritzker, dedicated to architects in 1995 and several other great awards. 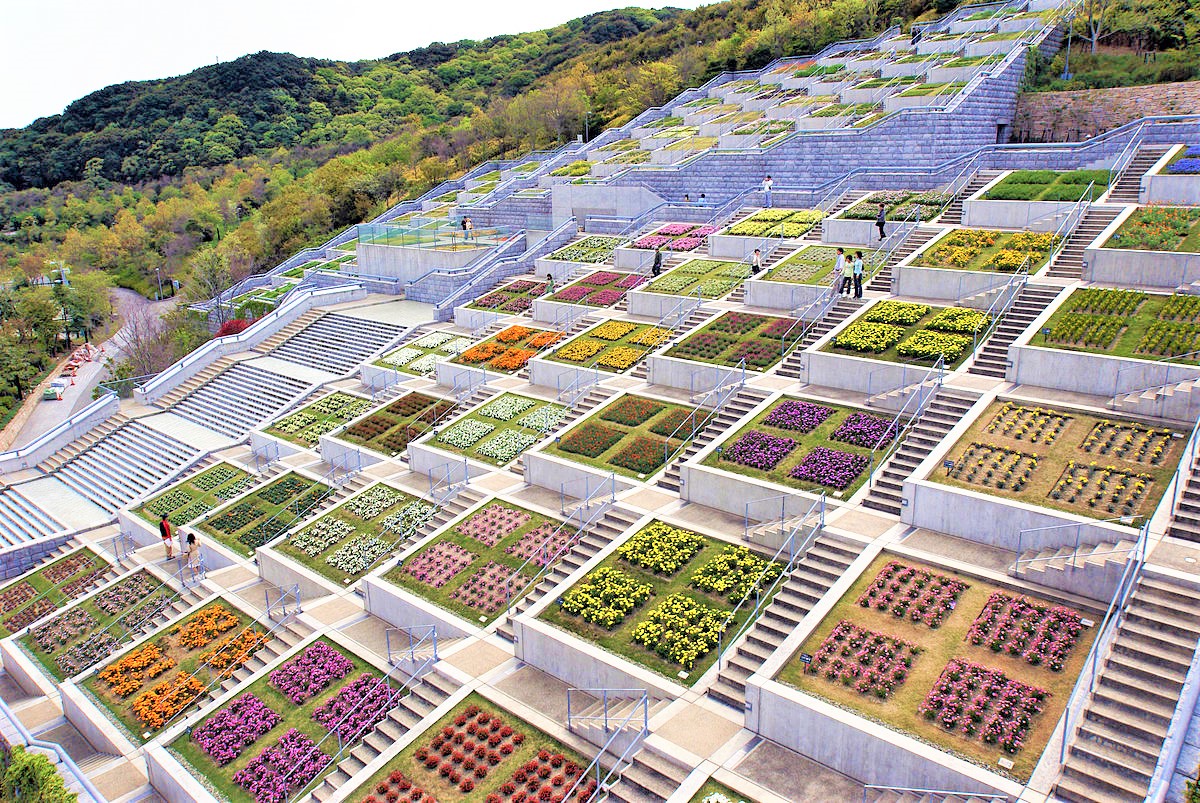 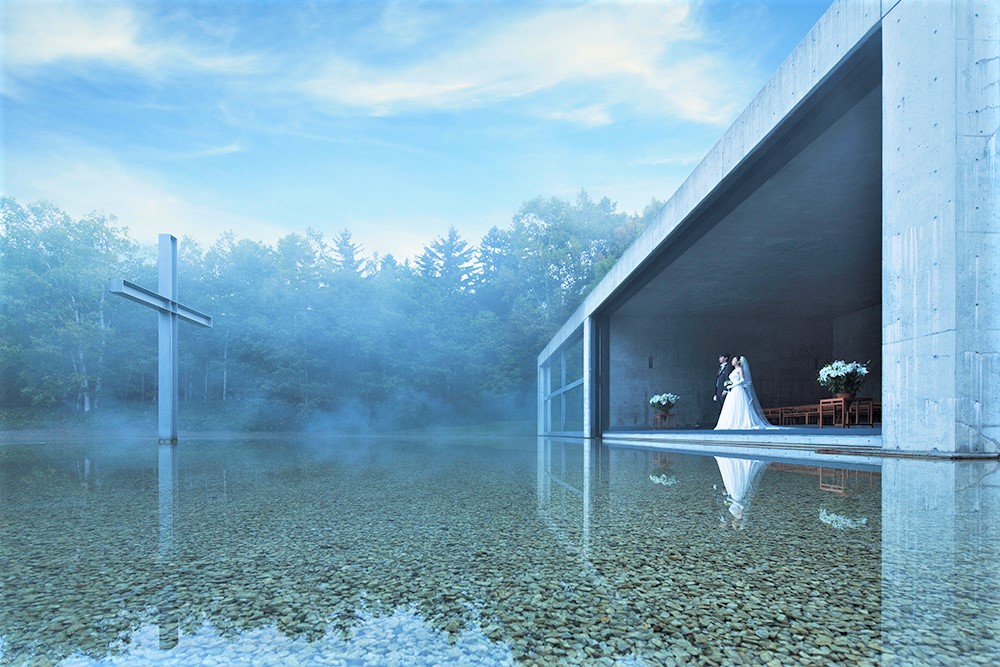 So, moving back to our topic which is Makomanai Takino Cemetery, previously, the field was filled with nothing but a huge Buddha statue called Atama Daibutsu. The 44-foot statue stood there alone for so many years since 1982 and some were frightened by it rather than showing admiration and reverence. Therefore, to make it more appealing to visitors, Tadao Ando decided to revamp the cemetery and turn it into a more serene place. The objective of the project was to build a prayer space while honouring the Buddha statue. 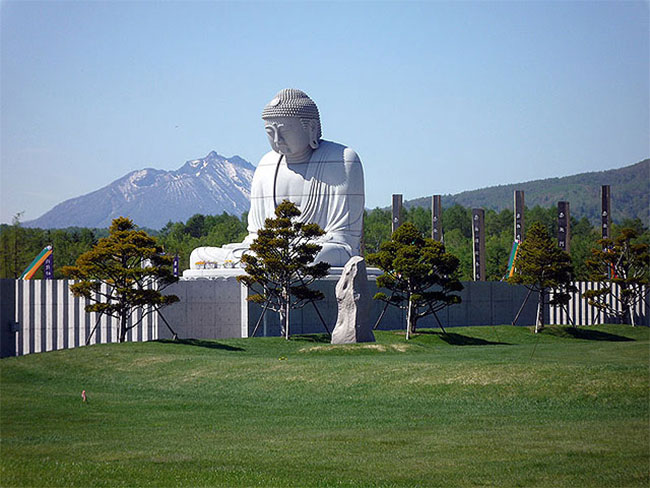 Before the reconstruction of Atama Daibutsu. Image Source: David Airey. 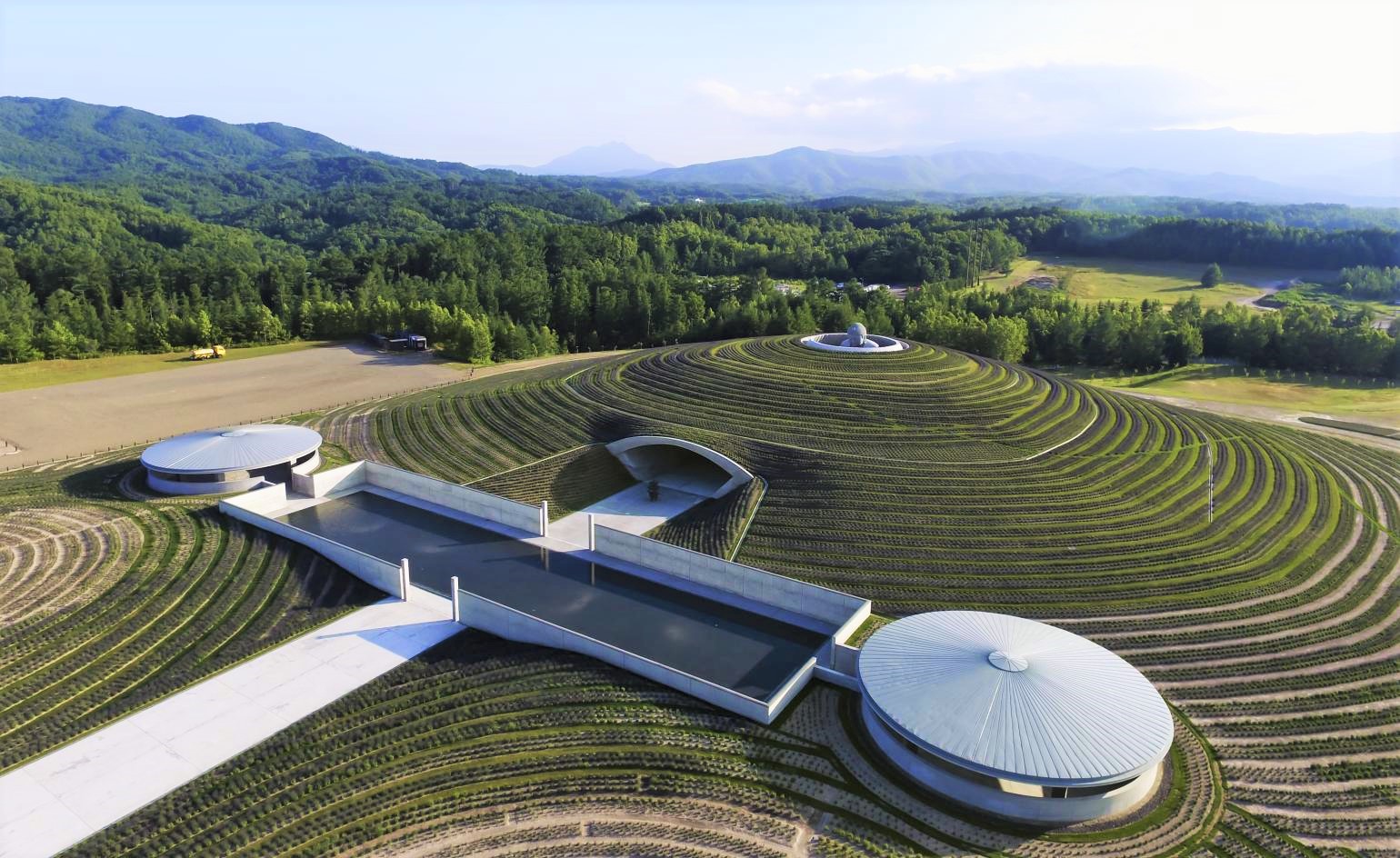 How it looks like after planting lavender flowers and walls around the statue. Image Source: Wallpaper.

Opened to the public in 2015, Makomanai Takino Cemetery is home to over 150,000 lavender plants, a mausoleum and thousands of traditional tombstones. From afar, visitors can only see the upper forehead of the Buddha statue, which looks very enigmatic to those who don’t know its existence. The idea of this formation is called ‘Head-out Buddha’ and they covered the lower parts of the statue under a field of lavender flowers. 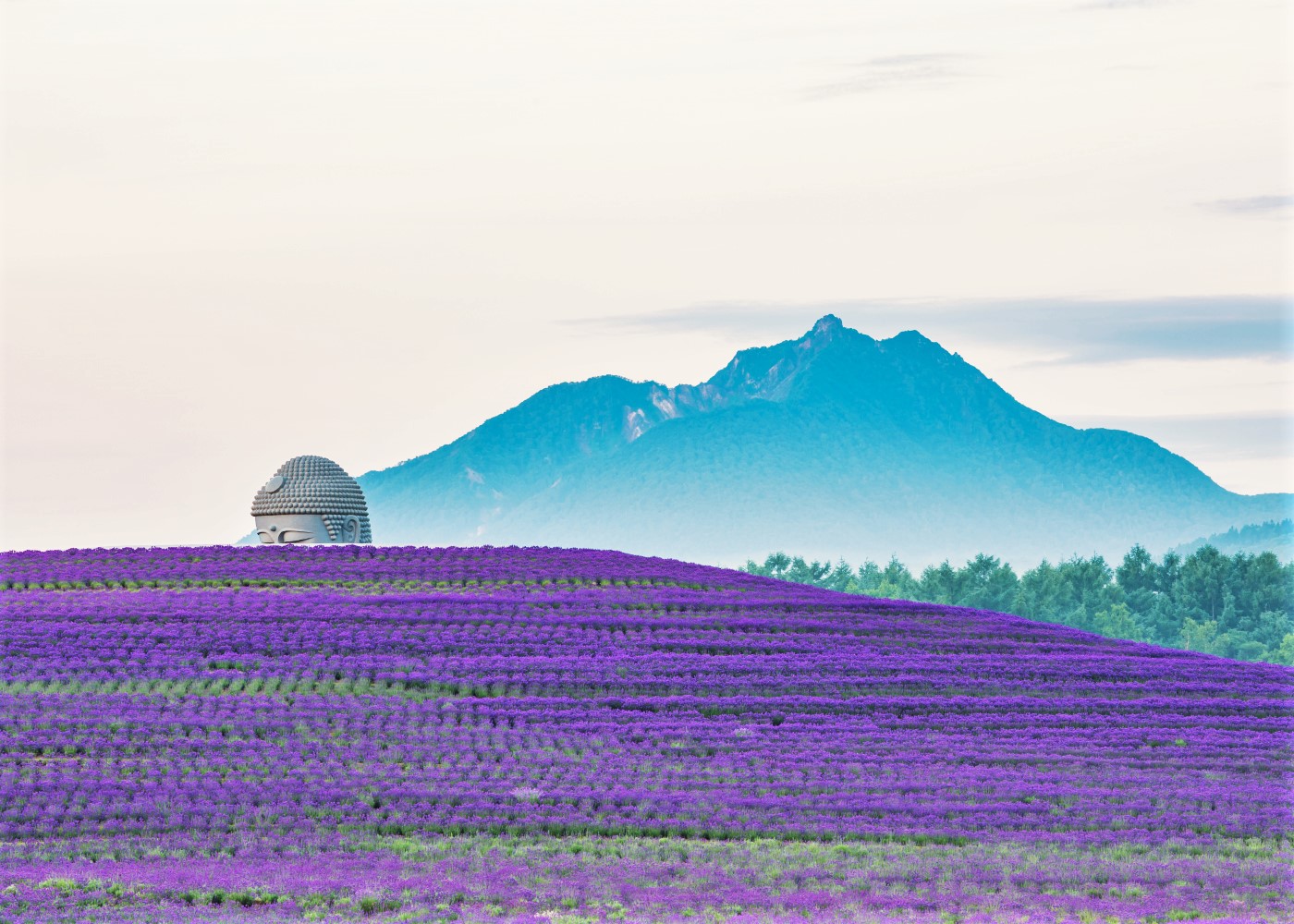 To see the full-size statue, visitors need to walk through an underground 40 meters tunnel. As they entered the tunnel, they will catch a glimpse of the statue bit by bit. When they reached the end of the tunnel, they will see some kind of a halo shining from the sky, above the cross-legged sitting statue which is very ethereal. In addition, visitors are welcomed to pray here. 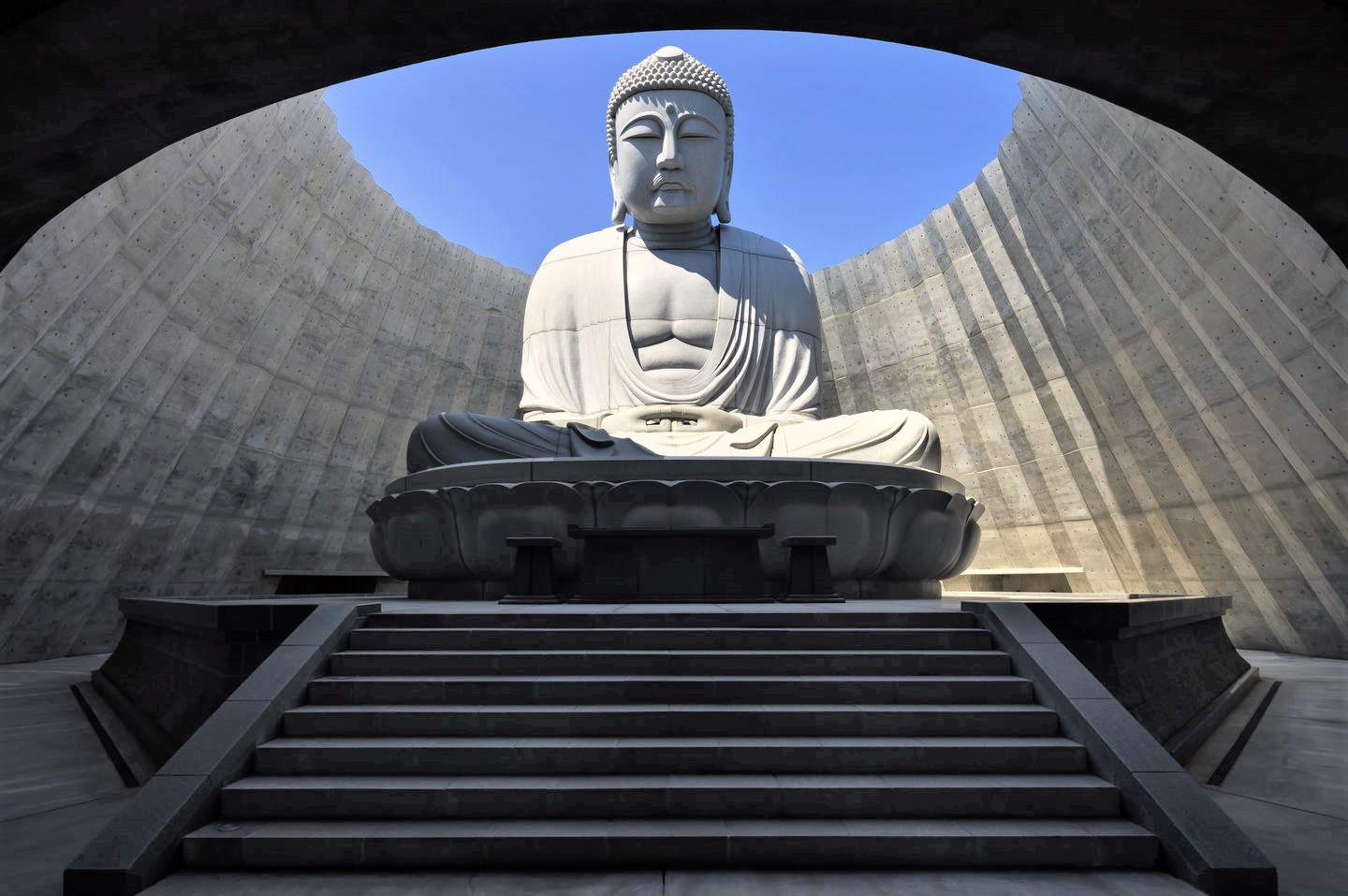 The full view of the Buddha statue. Image Source: Vitra.

Before entering the tunnel, there is a water ground installed in between grey concrete walls, which coordinated with the whole surrounding. Besides, it also adds a more tranquil atmosphere to the cemetery. 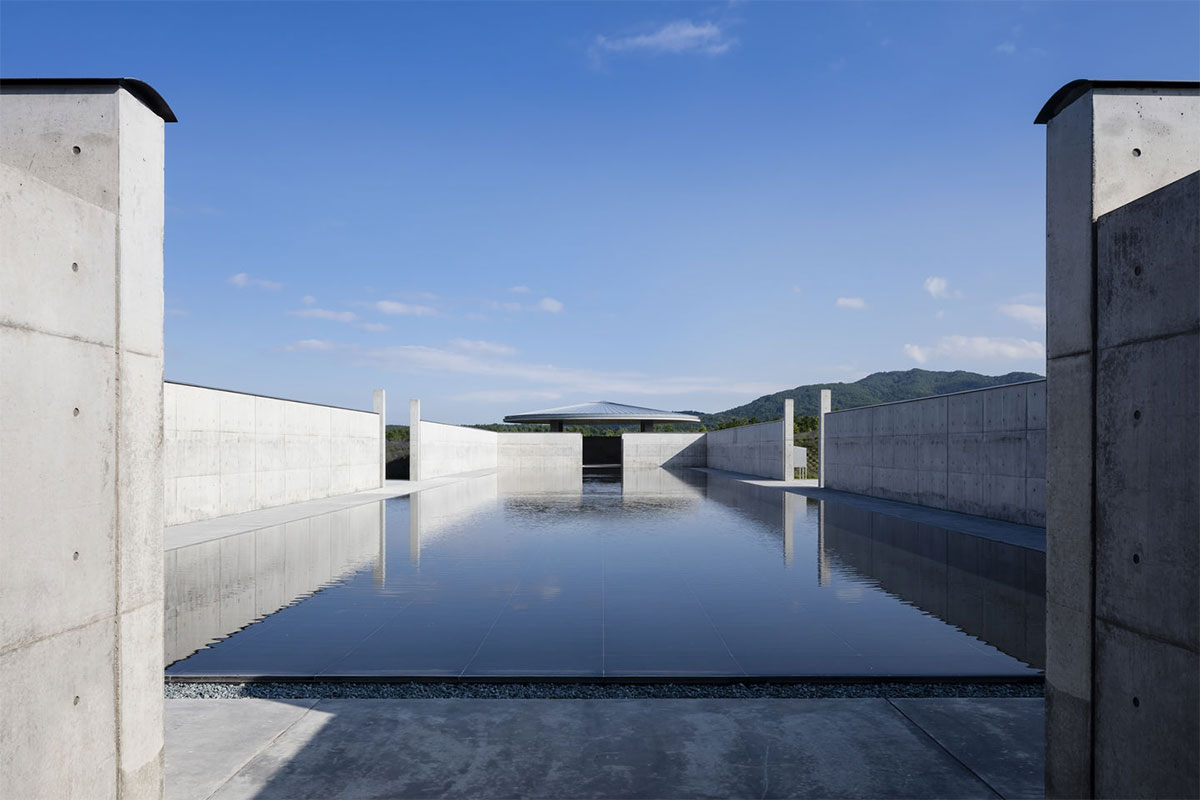 Makomanai Takino Cemetery looks strangely stunning each season even when it’s coated with snow powder during winter. During summer, the cemetery is covered in lush green and colourful flowers. Other than that, even though this is a cemetery, the place will still charge you with an admission fee to maintain the lavender flowers and other facilities in the area. You can also walk at ‘The Road of Prayer’, located above the Buddha’s head among the lavenders, but with an additional charge. Interestingly, you will get the chance to capture the view of the cemetery from a great perspective. 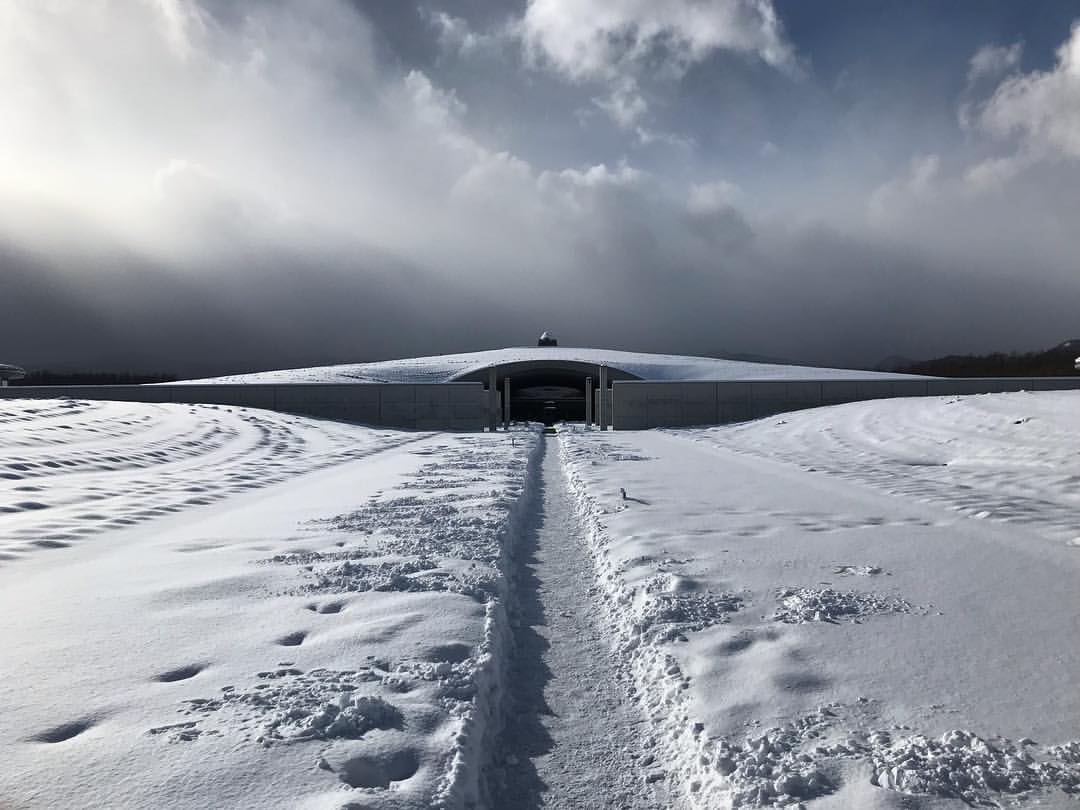 Apart from the Buddha statue, as you walk around the cemetery, you will also come across 40 Moai heads figures (similar to Easter Island) built in a horizontal line located not too far from the entrance to the Buddha statue. These Moai heads have been placed in the cemetery for years before the reconstruction. Their presence definitely brings more mystery to Makomanai Takino Cemetery. 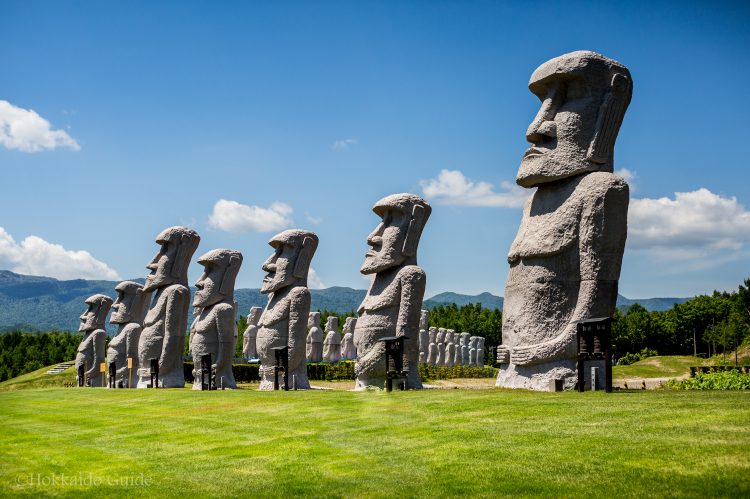 In addition, there is also a complete replica of the famous Stonehenge. As you all know, Stonehenge is a stone historical structure nestled in a small county of Wiltshire, England. It is one of the greatest wonders of the world. The replica of Stonehenge in the cemetery has attracted many people to come and see the strange add-ons in Sapporo. Moreover, with the Moai heads and a replica of Stonehenge being placed together alongside a Buddha statue, this is definitely a sight not to be missed. 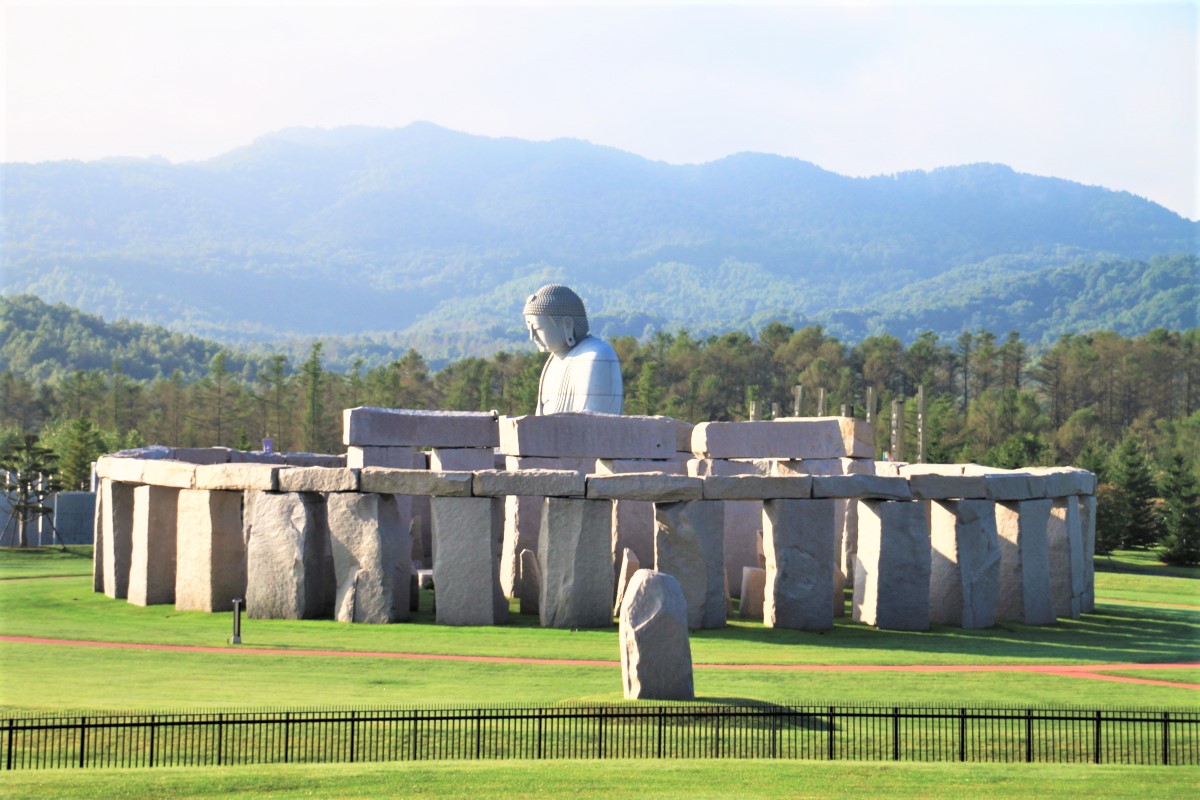 A replica of Stonehenge near the Buddha statue before reconstruction started. Image Source: Weird Japan.

You might wonder where the burial grounds are. Well, this cemetery stretches out to 1,800,473 m² and consists of several burial areas. To get to the sites, you need to travel by shuttle bus, operated by Makomanai Takino Cemetery. Other than these three amazing sculptures, there is also Takino Flower Marche that sells lavender flowers and a communal memorial hall.

If you are planning to visit the burial sites, there are some rules that you need to follow. For instance, you need to bring back whatever you brought to the cemetery such as foods or drinks because animals will eat and mess up the place. This usually happens during offerings. Besides that, please refrain yourself from making loud noises and do not run on the field as it will disturb other people’s time to mourn. Lastly, it is strictly prohibited to lean and shake the tombstones. Overall, make Makomanai Takino Cemetery as your go-to places the next time you are travelling to Sapporo.