Izumo Taisha, One Of The Oldest and Holiest Shrines in Japan

Winter is fun, but don’t forget your manners No ratings yet.

Keep Yourselves Connected with Wi-Fi and Internet No ratings yet. 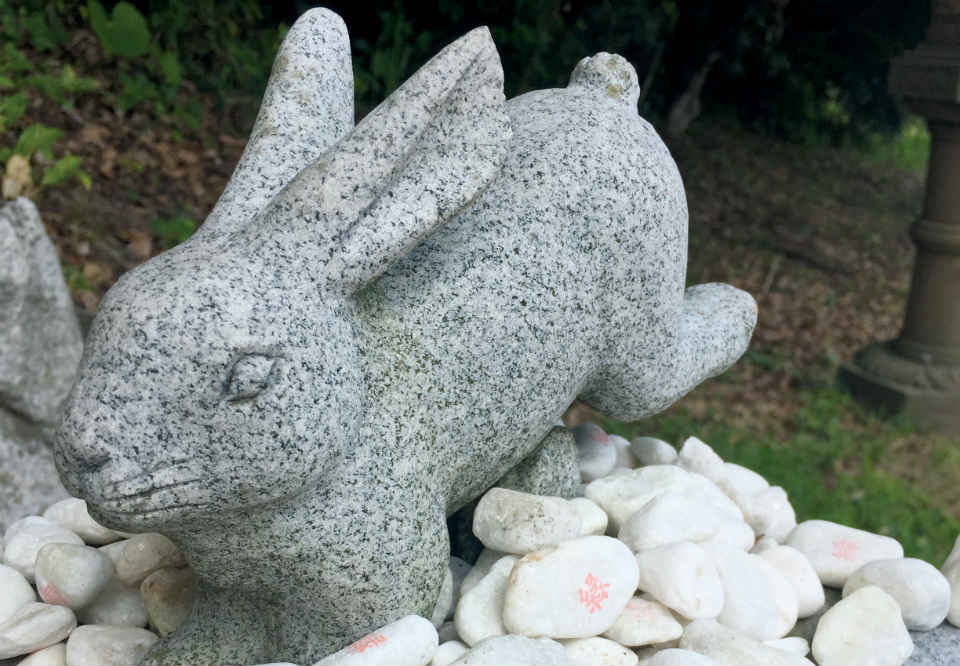 Izumo Taisha, One Of The Oldest and Holiest Shrines in Japan
No ratings yet.
Tags: chugoku • destinations • gourmet • shimane • shrines •

Izumo Taisha is located in Shimane Prefecture on the western coast of Honshu, which is rich in legends about the birth of ancient Japan.

Gift from the Heavens

Located in Izumo City, Shimane Prefecture, Izumo Taisha (Izumo Grand Shrine) is considered the oldest Shinto shrine in Japan and holds an important place in Japanese mythology. According to an ancient creation myth, the sun goddess Amaterasu sent her grandson Ninigi-no-Mikoto down to govern the humans, and he landed in what is now Shimane prefecture. Okuninushi, who was the ruler at the time, granted his land to him to rule. In gratitude, Amaterasu presented the shrine to Okuninushi, who is now worshipped there.

No one knows exactly when the shrine was first established, but according to historical records, it already existed in the early 700s. It is recorded that as early as 950, the shrine was the tallest wooden structure in Japan, reaching a height equivalent to 48 metres. Archaeological remains have been found in the area that support this. Today, it is designated as a National Treasure of Japan. 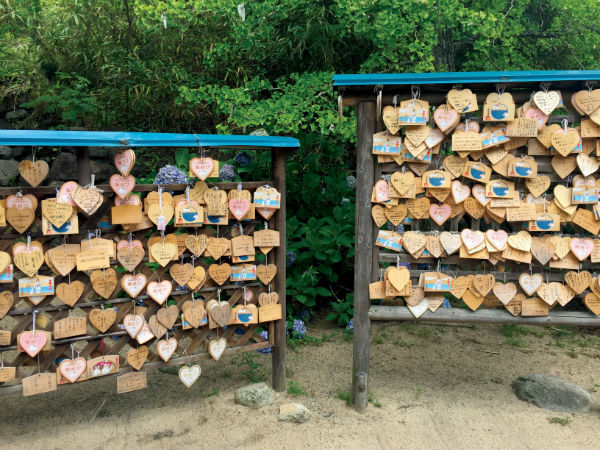 As Okuninushi is the deity of marriage, matchmaking and establishing good relationships in general, the shrine is popular among those wishing to find a good match, as well as an auspicious location for wedding ceremonies. Princess Noriko, a relative of the Japanese Emperor, married the son of the shrine’s head priest here in 2014. 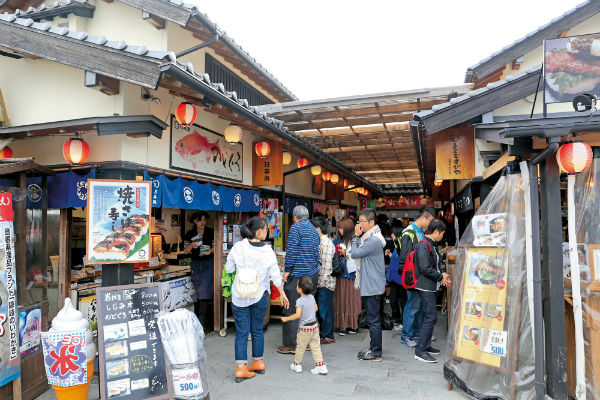 There are many shops outside the shrine where you can take a break and try local specialities.

Called the Land of the Gods, Izumo is said to be where the 8 million gods of Japan hold their annual meeting to discuss important matters. This takes place during the 10th to 17th days of the 10th month of the lunar calendar – around November in the Western calendar. That’s why the 10th lunar month is known as Kami-ari-zuki (“the month the gods are present”) in Izumo, and Kanna-zuki (“the month without gods”) in the rest of Japan. Special ceremonies are held at Izumo Taisha to welcome the arrival of the gods and bid them farewell when they leave.

Rabbit statues can be found all around Izumo Taisha. This is due to an ancient legend of how the shrine’s deity, Okuninushi, helped a rabbit in Inaba (now part of neighbouring Tottori Prefecture). According to the legend, Okuninushi was travelling with his 80 brothers to court Princess Yakami of Inaba. As the youngest, Okuninushi had to carry all the baggage, so he was lagging behind. His brothers came upon a rabbit whose fur was all torn off, and it begged them for help. The brothers cruelly told the rabbit that bathing in seawater and drying in the wind would heal it. Of course, when the rabbit did this, it felt great pain. Taking pity on the rabbit, Okuninushi told it to bathe in fresh water and roll in cattails. Upon doing so, the rabbit was healed at once. Gratefully, the rabbit told Okuninushi that because of his kindness, the Princess would surely marry him. Indeed, when Okuninushi reached Princess Yakami’s palace at last, she chose him above all his brothers. Incidentally, the rabbit of Inaba is revered as a deity itself in Hakuto Shrine in Tottori City. It is said to have healing powers for burns and other skin conditions. 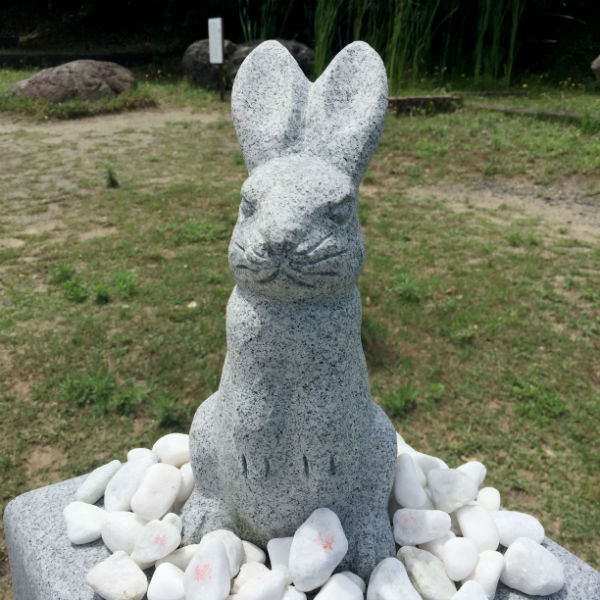 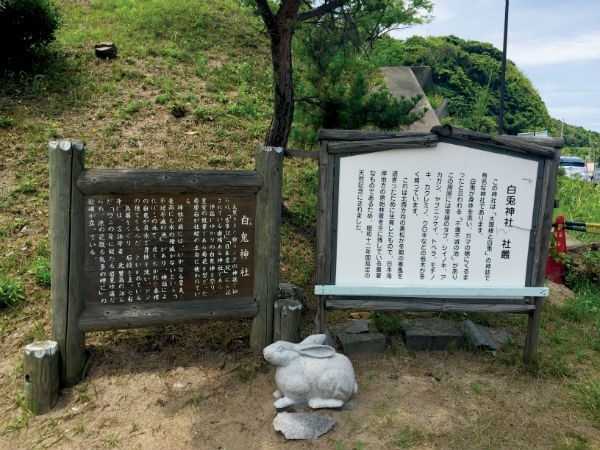 These tell the story of Okuninushi’s kindness to a suffering rabbit.

Warigo soba is a local speciality of Izumo. Cold soba noodles are served in a stack of 3 lacquered dishes with assorted toppings on the side. Begin by adding the desired amount of sauce and toppings to the top dish, and eat. After you’ve finished the noodles in the first layer, pour the leftover sauce and toppings over the noodles in the next layer, and so on. This allows you to enjoy different kinds of flavour in each layer! 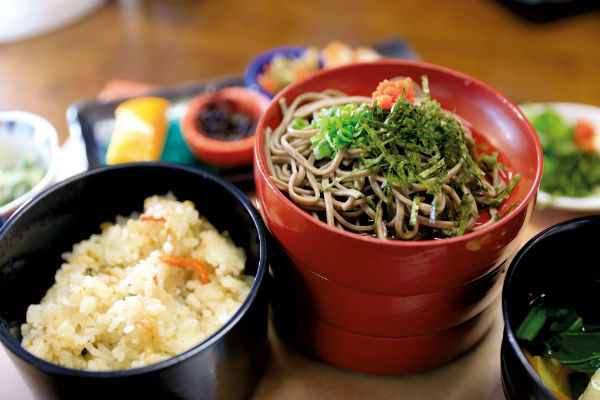 In Izumo, soba noodles are made with whole buckwheat grains,
so they’re darker and more chewy than soba in other regions of Japan.