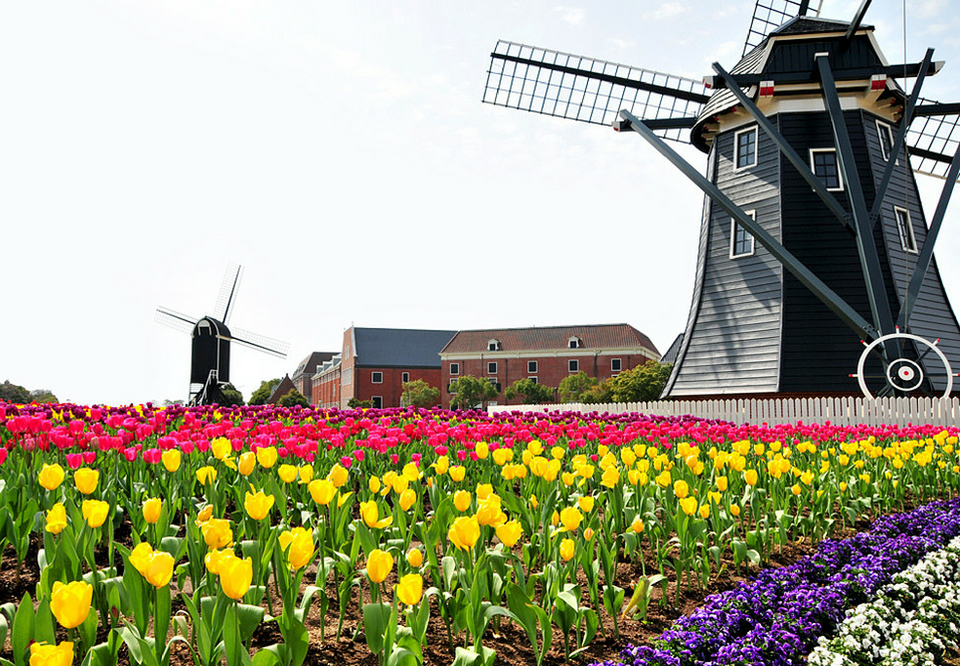 Who would have thought that you can actually visit an actual Dutch Village here in Japan? Well, this may come to a surprise to anyone visiting Nagasaki in Kyushu that you can visit a place called Huis Ten Bosch or HTB in short.

So, what is Huis Ten Bosch? I am pretty sure you will be having lots of questions about this fascinating and unique theme park, and this article will hopefully share information to anyone planning to visit here. Let us start with the history of this place in Sasebo, Kyushu. 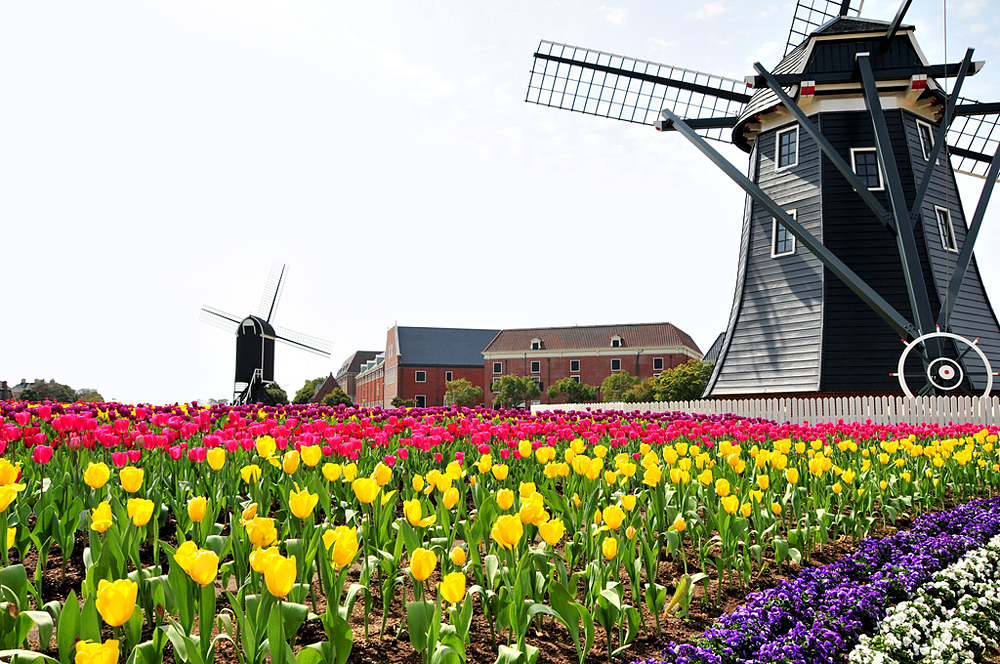 Beautiful Tulips by the Windmills. Photo by gtknj on Flickr. CC By 2.0.

What is Huis Ten Bosch?

Let me start with the history of this unique place. The Japanese had trading relations with the Dutch people, dating back to 1609, where a trading post was opened in the city of Hirado, which is quite close to Sasebo.

Huis Ten Bosch was opened in 1992, after taking over the previous Nagasaki Holland Village Park which originally opened in 1983. The new management revamped it to be one of the largest themed park in Japan, with a size of 1.5 times larger than Tokyo Disneyland.

In 2010, Japanese travel company H.I.S, took over the park and renovated it to be one of the most interesting places to visit in Kyushu to date. 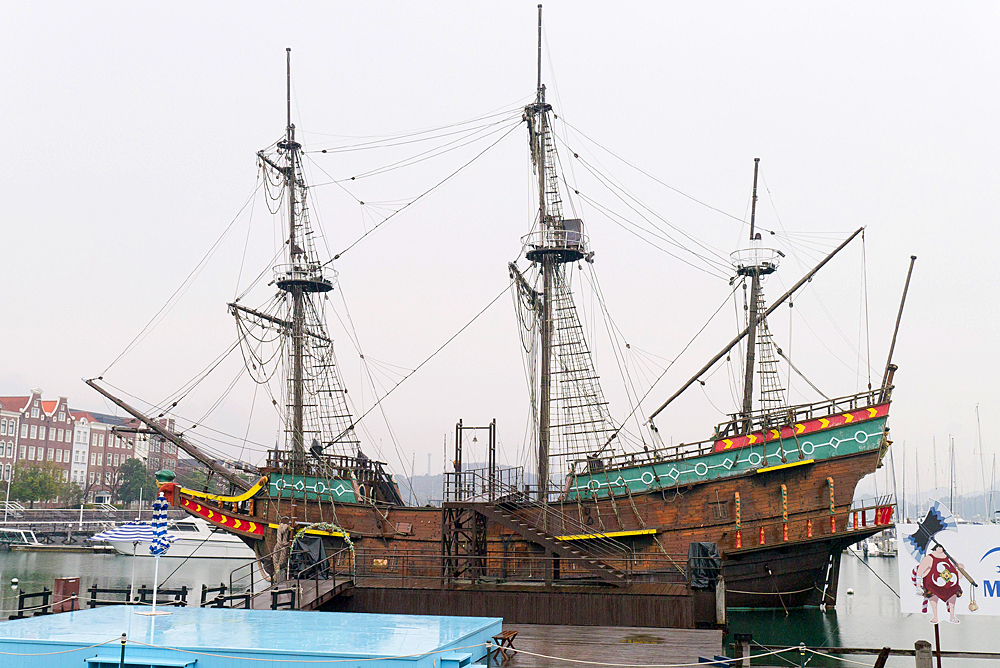 An old wooden ship at the Harbor Area of the park. Photo by Wei-Te Wong on Flickr. CC By 2.0.

Because this place is so huge, it is estimated that the area of the park is a staggering 152 hectares in total and has 400,000 trees and 100,000 flowers throughout the year. This park is also very popular during the summer periods, but throughout the year, it attracts all kinds of visitors from the world over.

Huis Ten Bosch offers various shops and restaurants, theaters, museums, art museums, amusement facilities, hotels and villas, a harbor, as well as banks, hospitals and fire stations. There is also 6 kilometers of Dutch style canals that crisscross the town in all directions of the park. 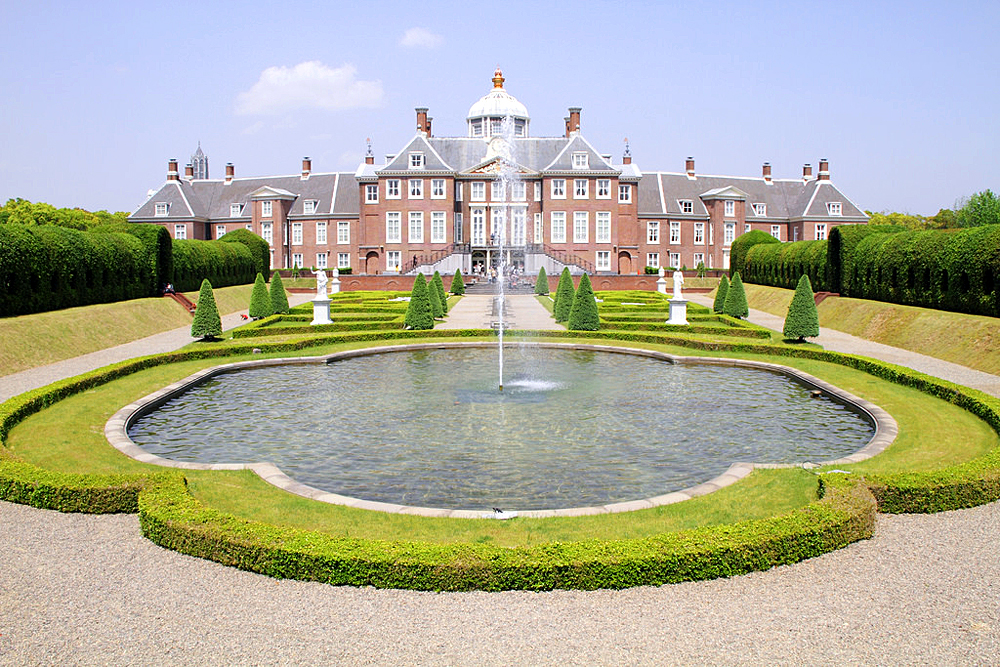 A beautiful Dutch Palace at the park. Photo by Yuki Shimazu on Flickr. CC By 2.0.

While Huis Ten Bosch is suited for family travel, especially those with kids, be prepared to do some serious explorations here. There are eight zones in the park, and each of them offer different kinds of attractions, entertainment and lifestyle places. The eight zones are;

Many visitors to Huis Ten Bosch will go through all of the zones, but if you are strapped for time and still want to visit this park, I would recommend you explore Adventure Park, Amsterdam City and Harbor Town as these are the very popular zones. 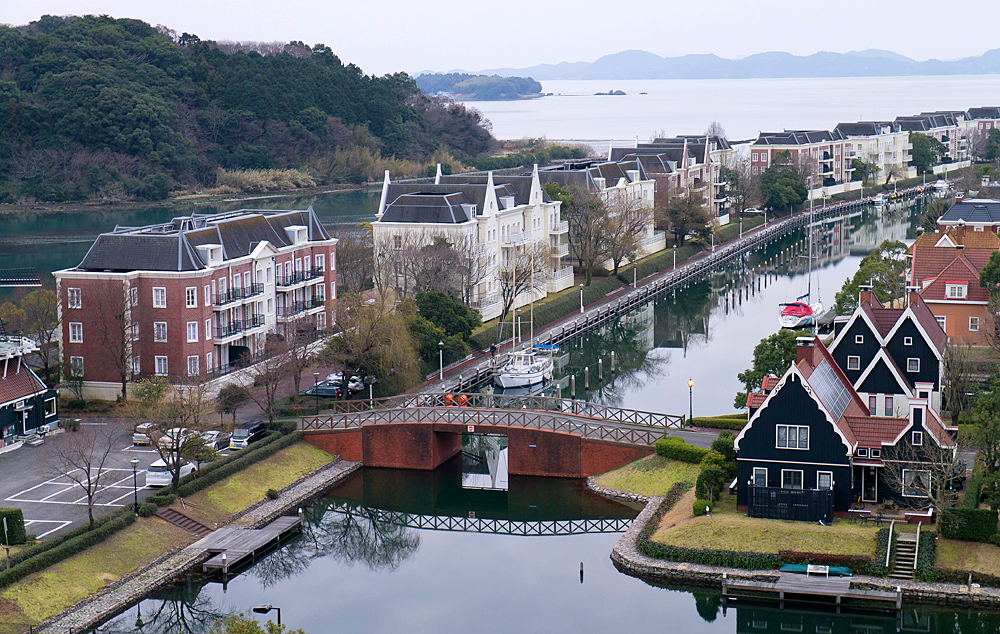 In terms of areas or sections, there are eight of them, which will take you an entire day just to see them all. Therefore, if you are planning to visit Huis Ten Bosch, I would recommend you allocate one full day here.

Attractions include indoor and outdoor, which include the largest water park attractions in Japan. The water park only opens in the summer from June till September, and is located at the harbor area of Huis Ten Bosch. One of the highlights of the water park is the Adult Lounge Pool, which is very unique and only for adults.

But there is also another night pool called Shining Night Pool, where visitors with kids can enjoy without worrying about the hot sun. A wellness indoor pool is available for those wanting to avoid the sun. 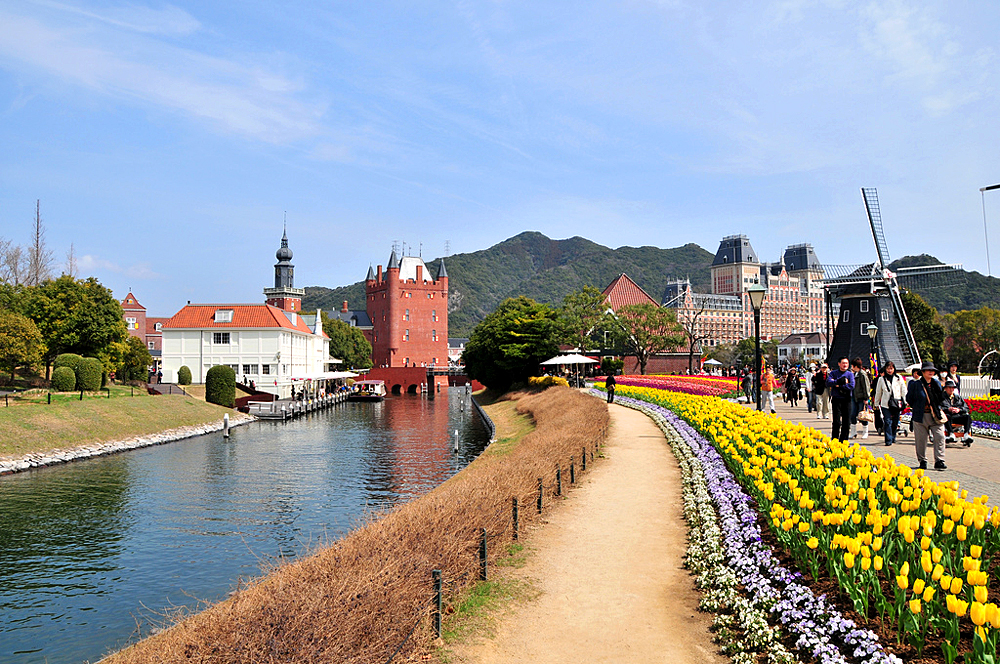 Some of the stunning Dutch landscapes at Huis Ten Bosch. Photo by gtknj on Flickr. CC By 2.0.

For shows, there are multiple shows that go one all over the park. You just need to find out which you want to see, and when you arrive at the park, the park guide will have the shows and times, according to the season.

Shopping for souvenirs is also high on visitors list as you can find quite a good selection of shops that sell traditional Japanese items. But it gets a little interesting when you come across shops that sell Dutch souvenirs, which are available at Amsterdam City area here. 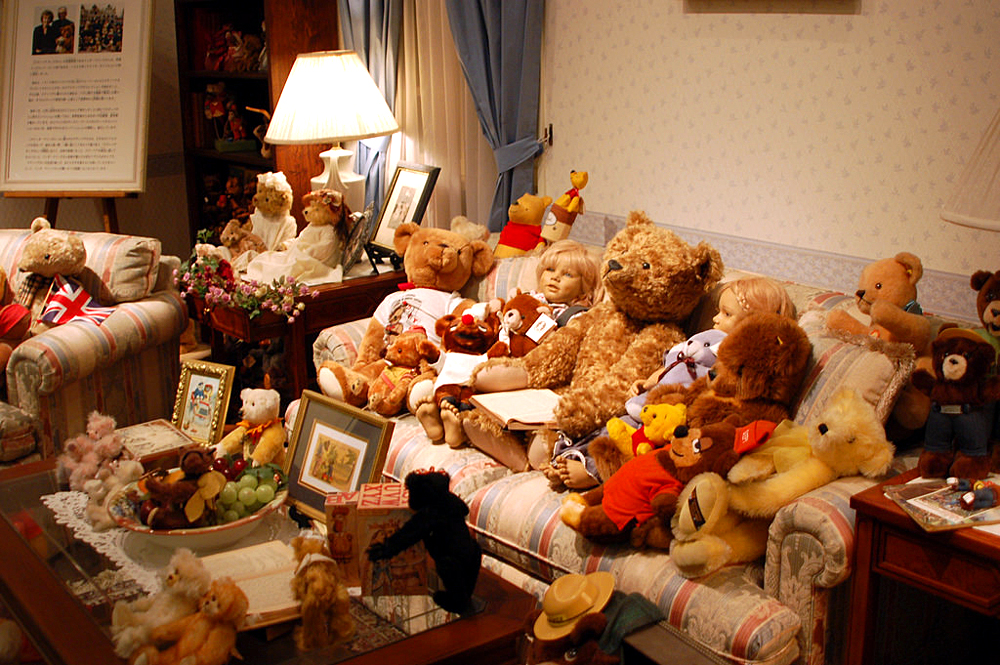 The unique Teddy Bear Museum here. Photo by Marufish on Flickr. CC By 2.0.

You can also find a unique Teddy Bear Museum in the main entrance area, which boasts of a unique collection of 700 teddy bears from all over the world. Some of these teddy bears are rare and many of them are special collectibles, highly sought after by collectors. 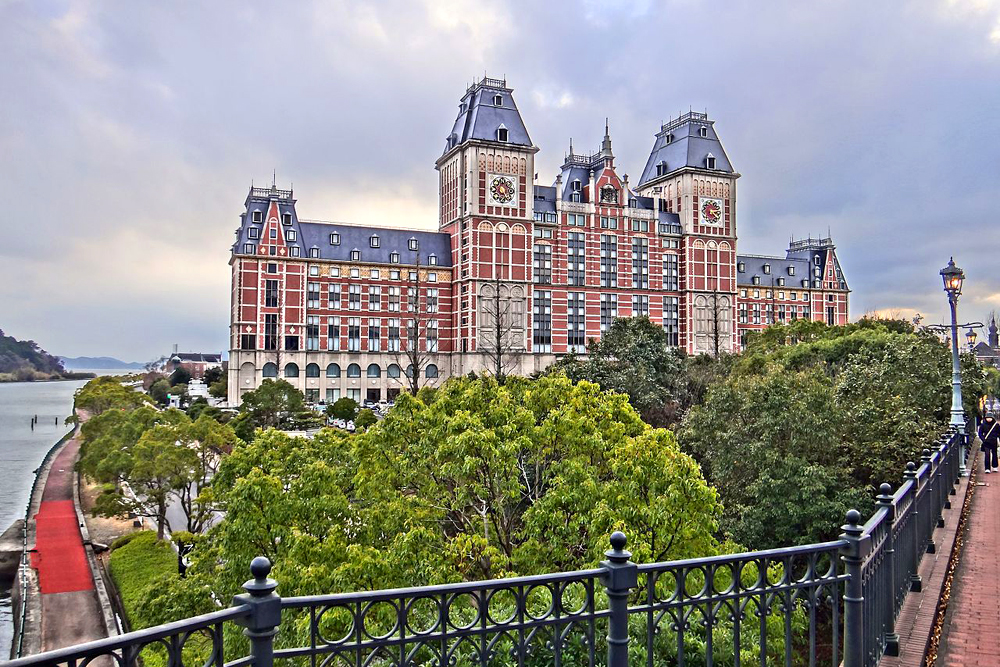 One of the beautiful hotels at the park. Photo by Wikimedia. CC By 3.0.

A number of tourist heading here will opt to stay at one of the many hotels at Huis Ten Bosch. This will make your experience much more easier and not so rush. I would personally recommend you book a package that includes a one night hotel stay at Huis Ten Bosch.

The hotels are very unique and of world class standards, which will compliment your experience of this Japanese theme park and attraction.

The four main hotels here are; 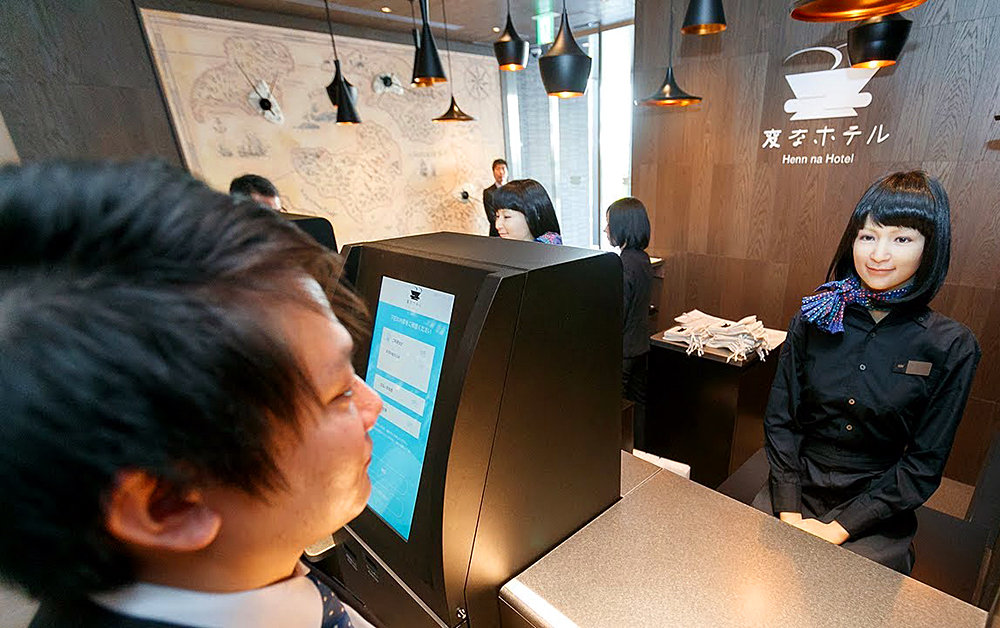 A customer checks in at the robot hotel. Photo by YouTube Screen Grab.

One of the star attractions in Huis Ten Bosch is the unique Henn Na Hotel, the first robot staffed hotel in the world, and located in this unique park. Branded as an upscale hotel, there are 144 rooms with a total of 186 robotic workers, and some of them actually speak English, Chinese, Korean and of course Japanese. 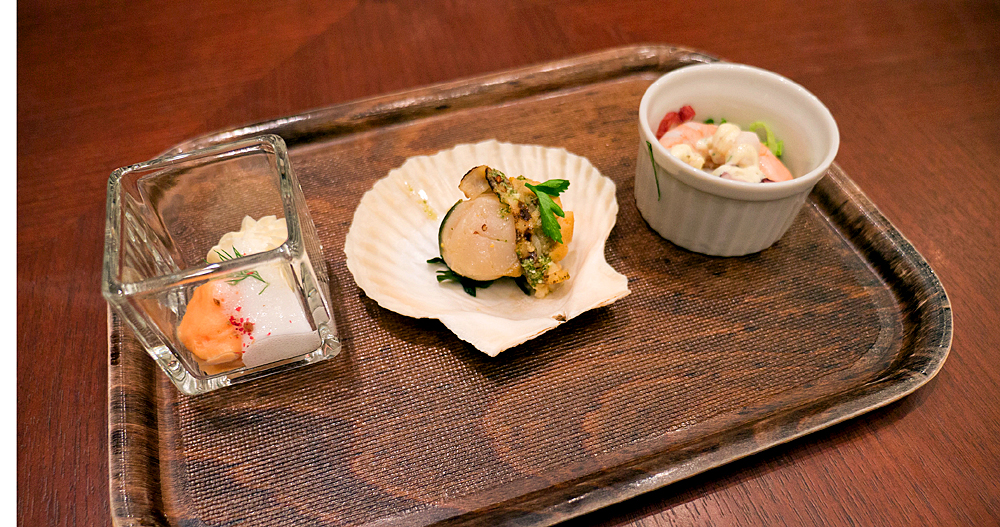 Fusion Japanese cuisine that can be found here. Photo by Wei-Te Wong on Flickr. CC By 2.0.

Everybody will need to eat at some point when visiting here, and the good news is that there are a total of 56 different cafes and restaurants available all over the park. With a selection like that, you are guaranteed to have a difficult time choosing what you want to eat.

Choices include traditional Japanese, seafood, noodles, continental, fusion, to Asian food. At the harbor section, you can expect some o the freshest selections of Japanese seafood done in a variety of choices. The most interesting would be that Huis Ten Bosch features many of the local favourite food of Kyushu. 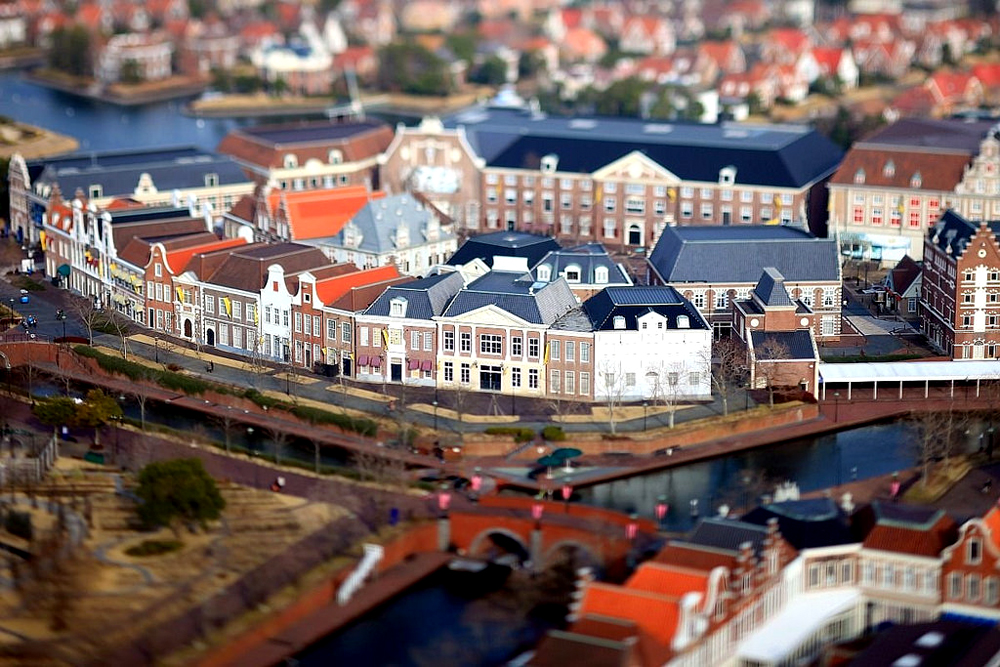 A view of the Amsterdam Town. Photo by Yas Sakata on Flickr. CC By 2.0.

There are various kinds of admission tickets to the place, like night admission, general admission and multiple day passes. The below are the most common tickets that visitors will get. 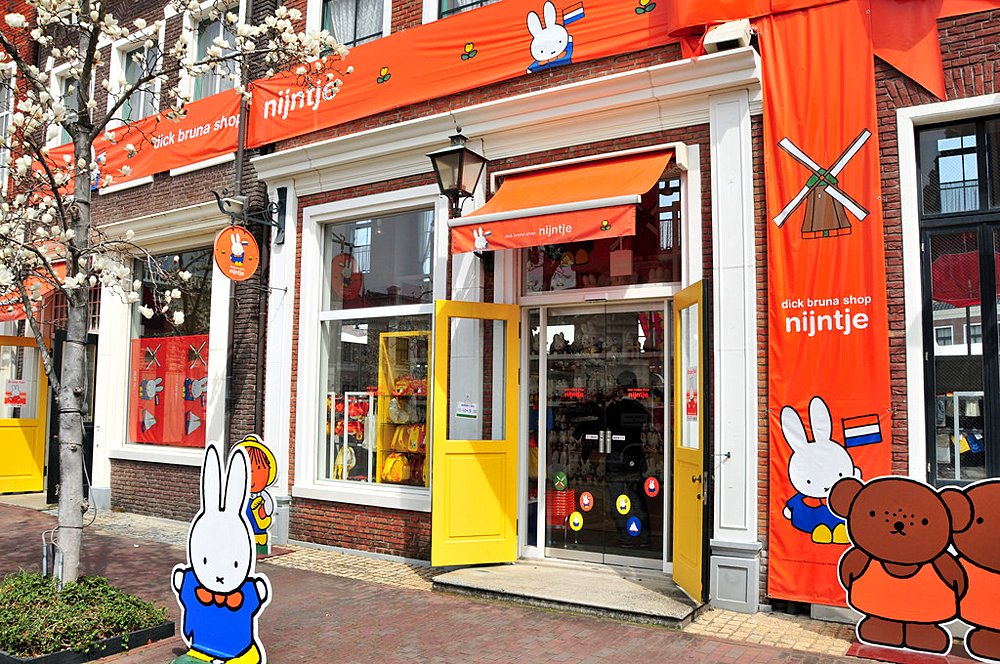 How to go to Huis Ten Bosch Theme Park

For those traveling via trains, make sure you get the Japan Rail Pass or Kyushu Rail Pass, which covers your journey to Huis Ten Bosch, and around Kyushu. This is one of the most practical and affordable methods of traveling around Kyushu.

There are hourly JR Limited Express Trains that take about two hours from Fukuoka and cost ¥3800. There is one transit at Haiki Station, where you connect to Huis Ten Bosch Station.

Traveling from Nagasaki, you can take the hourly JR Seaside Liner Train which takes about 75 minutes and cost ¥1470. The train stops at the Huis Ten Bosch Station.

If you are flying in, the most convenient way to get to Huis Ten Bosch from Nagasaki Airport is via the high speed boat service. It takes 50 minutes one way and cost ¥1960 yen.