5 Travel Essentials when you go to Japan No ratings yet.

Hop on a Boat Cruise at Geibikei Gorge No ratings yet. 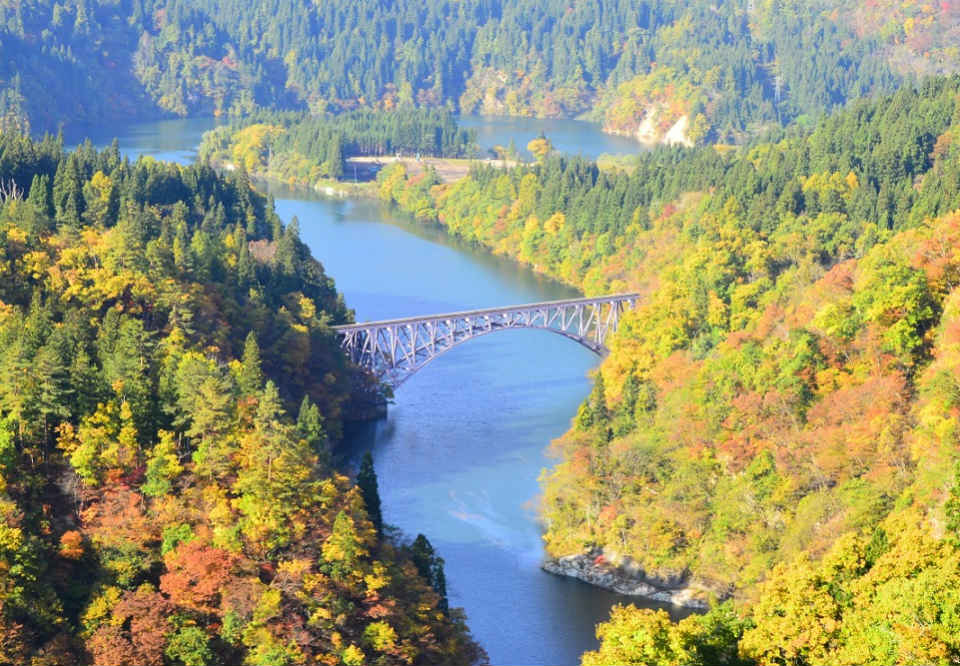 The JR Tadami Line 只見線 is a railway line in the Tohoku region, connecting Aizu-Wakamatsu Station in Aizu-Wakamatsu 会津若松, Fukushima Prefecture and Koide Station in Uonuma 魚沼, Niigata Prefecture. Travelling across the deep mountainous picturesque landscape of Fukushima, the line is known as one of the most scenic train routes in Japan.

It traverses the Oku-Aizu 奥会津 region located in the southwestern part of the Fukushima prefecture, covering places like Kaneyama Town, Mishima Town, Tadami Town, and Yanaizu Town. Besides being an important mode of transportation for the people living in this rural part of Japan, JR Tadami Line is also no stranger to the train fans, photography lovers, and visitors who are looking to explore a different side of Japan.

In this article, let’s find out more about JR Tadami Line and some interesting attractions along the way. 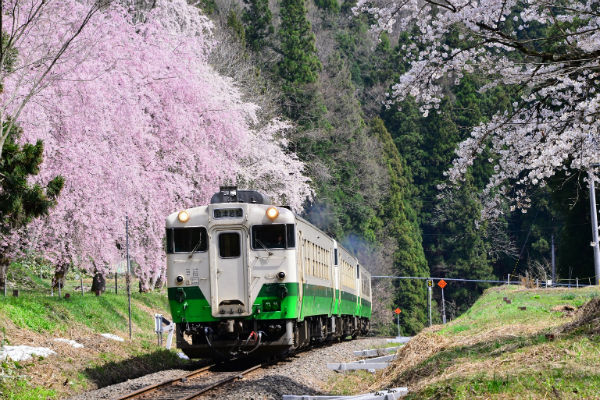 Tadami Line is a local train service, meaning the trains stop at all stations along the way and passengers do not have to reserve seats to take the trains. It takes over four hours to travel the 135.2-kilometre journey from one terminus (Aizu-Wakamatsu 会津若松駅) to another (Koide 小出駅) due to many curves on the line. 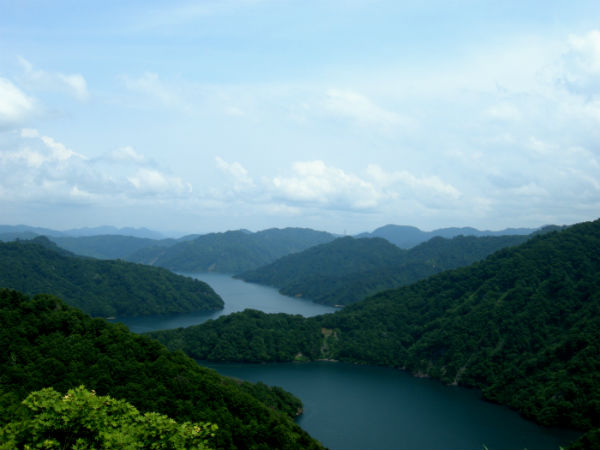 The trains run through beautiful forests and valleys along the Tadami River 只見川, one of the great sights of the Oku-Aizu region. The river is often seen covered with fog, giving it a mystical charm. The scenery along the route is photo-worthy no matter what season it is: cherry blossoms in the spring, lush green in the summer, but particularly impressive is during autumn when the mountains are painted with autumnal colours, and winter when pure white snow covers the entire landscape, making it looks like a magical world from a postcard. 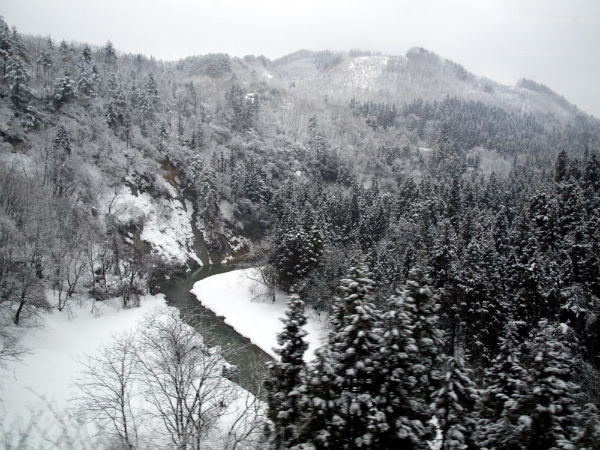 For many visitors, the highlight of the route lies between Aizu-Wakamatsu Station and Tadami Station 只見駅. However, please note that the tracks and bridges between the Aizu-Kawaguchi Station 会津川口駅 and the Tadami Station were damaged by heavy rains in 2011 and are still under repair (expected to be completed in 2021), so passengers have to take buses to reach the affected train stations. 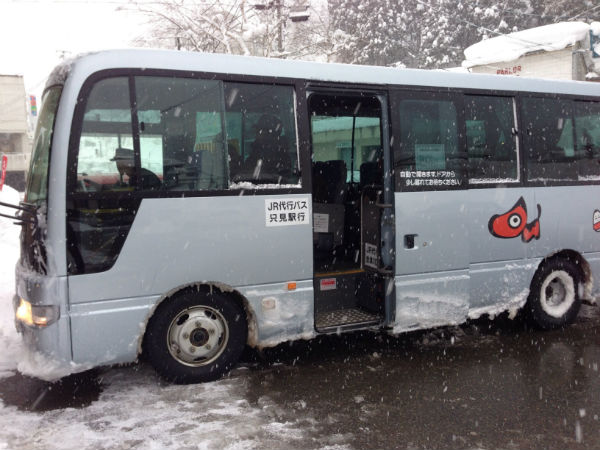 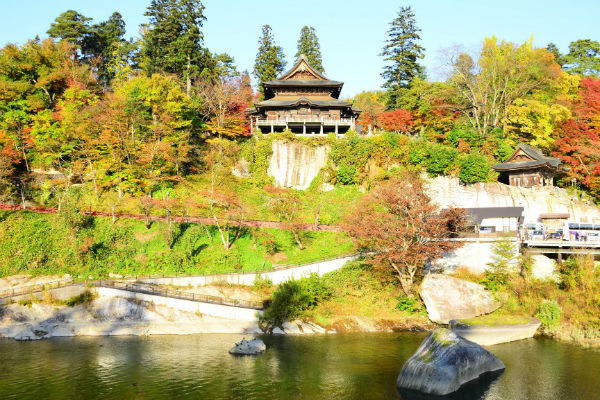 Enzoji is an old temple which dates back over 1,200 years. Located above the ground on a crag, it offers nice views over the Tadami River and the town. It is also a famous spot to view foliage in the autumn.

The temple is known for being the birthplace of the Aizu region’s symbol, akabeko (赤べこ, red cow). According to legend, Enzoji was built with the help of the mythical creature, which appeared out of nowhere to help the villagers carrying the heavy materials up the hill. You can find a statue of the akabeko, as well as two other cow statues which people customarily touch when making wishes, on the temple grounds.

A traditional event called Nanakado Hadaka Mairi 七日堂裸詣りis held at the temple on January 7 each year. It represents an interesting way of welcoming the New Year by the locals, whereby men in fudoshi (loincloth) will compete against each other in climbing up a huge woven rope to pray for good health and good luck for the year.

Access: 10 minutes’ walk from the Aizu-Yanaizu Station 会津柳津駅 on the JR Tadami Line. 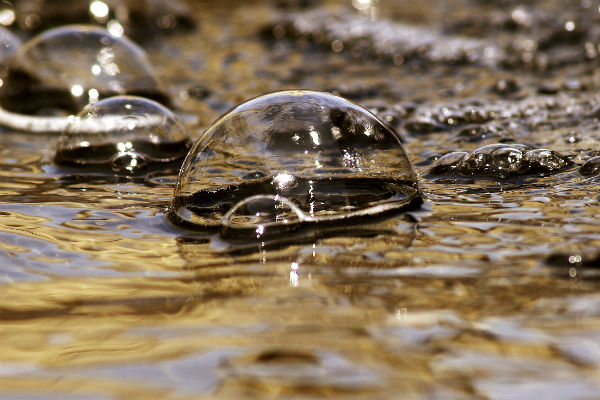 The small town of Kaneyama 金山 is famous for its naturally carbonated water, which can be enjoyed straight from the well as drinking water, and also in hot spring baths.

There is a well here from which you can draw the bubbly water and fill the bottles for free. Naturally occurred carbonated or sparkling water is rare in Japan. The water here is soft water and is said to have a smoother and gentler taste compared to the manufactured sparkling water.

You can also enjoy carbonated hot spring bath at one of the local ryokans, minshuku (family-run guest houses), and public bathhouses. An example of such places is Oshio Onsen 大塩温泉, a public bathhouse with indoor and outdoor pools and the fee is ￥300 per entry. The water creates bubbles on the skin almost instantly, working to rejuvenate the body after a day of sightseeing. 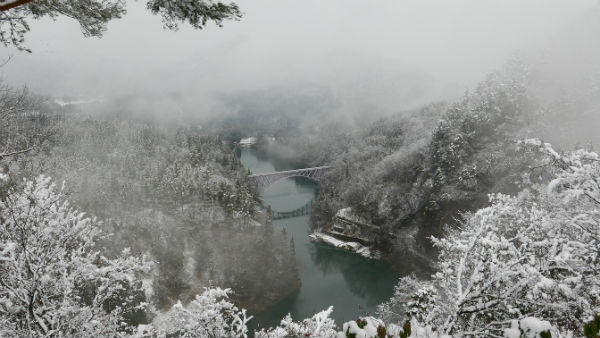 A famous photography spot near the Mishima-juku Roadside Station 道の駅尾瀬街道三島宿, this is the place where you can catch the signature view that represents the beauty of JR Tadami Line. It takes about 10 minutes to hike the trail from the roadside station up to the observatories, where many visitors come all the way just to witness and snap the photos of a train crossing the bridge over the river between the mountains. At the roadside station, you get to sample local delicacies such as soba noodles and locally raised chicken dishes.

Access: the roadside station is about 10 minutes by car from the Aizu-Miyashita Station 会津宮下駅 on the JR Tadami Line. 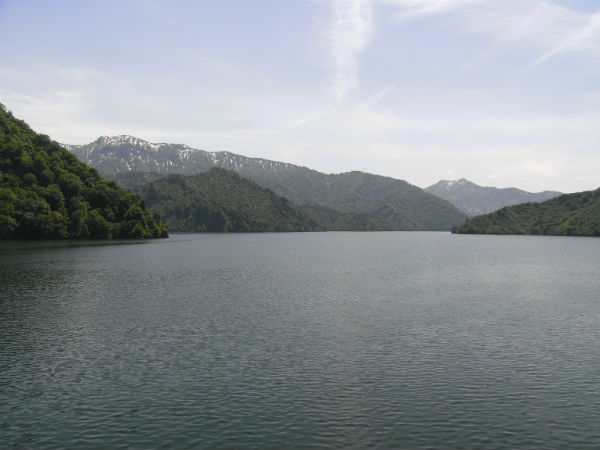 Located in Tadami Town, this lake is formed from the creation of Tagokura Dam, one of Japan’s largest dams by reservoir volume. Lake Tagokura is a popular tourist spot known for its scenic surrounding.

The upper stream of the lake, which can only be accessed by boat, is surrounded by pristine forests. The mountains look especially stunning from mid-October to early November when the autumnal colours set in. If you want to better appreciate the unspoiled nature in this area, I recommend a sightseeing boat tour. 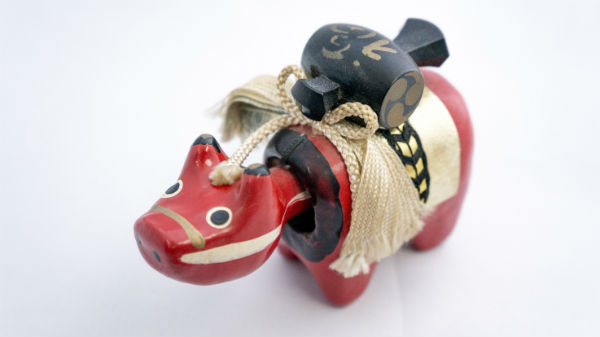 The cute akabeko is a great souvenir to mark your visit to the Aizu region. It is the mascot and also a traditional toy of the Aizu region, inspired by the legend of the red cow mentioned earlier that helped the locals to build a temple. It is usually made from two pieces of wood, one forms the body and the other forms the head and neck. The two parts are then fitted into each other so that the cow’s head bobs adorably.