Castle Heritage, the treasure of Shikoku Island No ratings yet.

Shikoku, The Place for Island Hopping! No ratings yet. 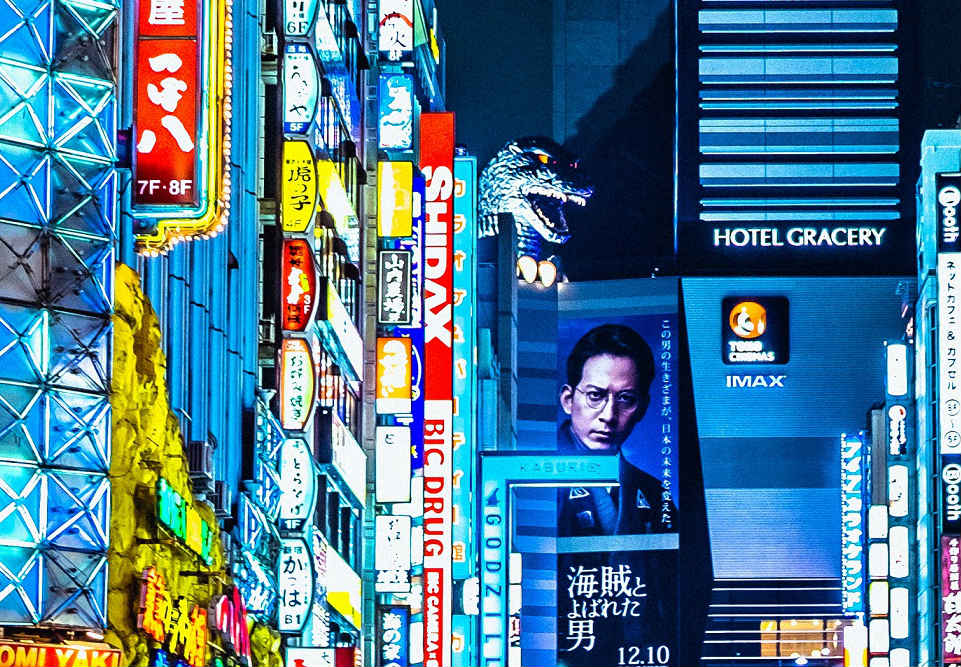 Godzilla is a movie monster that is no stranger to many people. It shows its face not only in movies but also in advertisements, comics, video games and even parodies. First appeared in the 1954 film “Godzilla”, it was depicted as an enormous, wrathful prehistoric sea monster awakened by nuclear radiation. The mutant beast fires atomic ray, stomping through the city and causing destruction during its rampage.

In case you didn’t know, this widely known pop culture icon originated from Japan. Although it looks like a dinosaur, its original name “Gojira” or ゴジラ in Japanese is actually a portmanteau of “Gorira” (gorilla) and “Kujira” (whale). Despite being an antagonist, the nuclear monster has captured the hearts of many moviegoers around the world.

Back to its hometown Tokyo, a city where the people had been shown fleeing the King of Monsters over a dozen of times in movies, it is not unusual to see some die-hard fans embarking on a tour visiting the places destroyed by Godzilla in the movies or hunting down the replicas of the monster that are dotted around the city.

This is indeed a fun thing to do, but if you are in Tokyo only for a short period of time, here are three recommended places to visit as a fan of Godzilla. They are all located in the city centre, so you can make the most of your trip pursuing the endeared kaiju (monster) while visiting other attractions in the city. 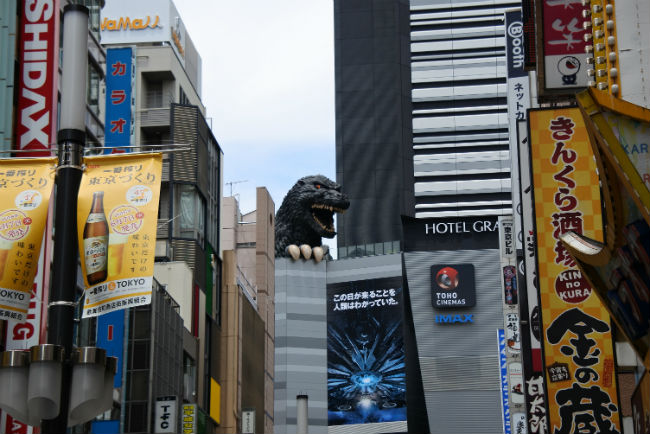 Located in the Shinjuku Toho Building in the ever lively Kabukicho District, the hotel has a life-sized, 12-metre tall Godzilla head replica on its 8th floor terrace, as well as two types of Godzilla-themed rooms: Godzilla View Rooms which offer stunning views of the giant’s head from the windows, and the one and only Godzilla Room chock full of kaiju-related décor and goodies.

There’s really nothing quite like a stay at Hotel Gracery Shinjuku a.k.a Godzilla Hotel, which offers one of a kind Godzilla experience to its monster-loving guests. What’s a better way to feel the terror (or fun) of having Godzilla watching you while you’re sleeping? Plus, whenever you look out the windows to take in the views over Shinjuku, you are sure to see the massive head of the big guy looming over. And the head even roars and breathes non-radioactive steam from noon to 8pm daily. 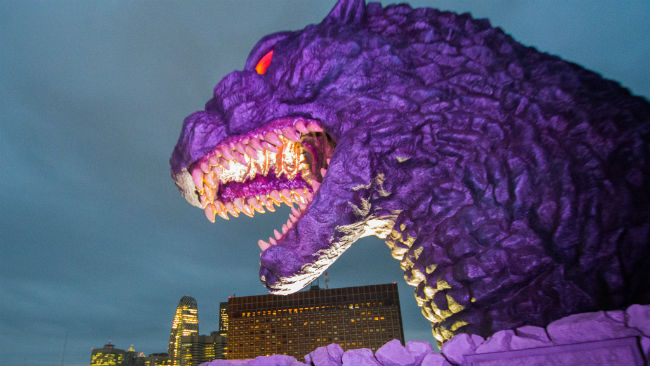 These Godzilla-themed rooms are very popular, so if you’re interested to stay in one of these rooms, do plan and book ahead. It is worth mentioning also that even without the Godzilla features, the hotel is still a decent accommodation option in Tokyo.

Fans who prefer not to stay at the hotel can choose to have a drink or a meal and observe the Godzilla head up close instead at Bonjour, the hotel’s cafe located on the 8th floor. Seeing the towering head right before your eyes is sure fun, not to mention plenty of interesting photo opportunities! You can also find Godzilla souvenirs and a series of Godzilla movie posters at the hotel reception. 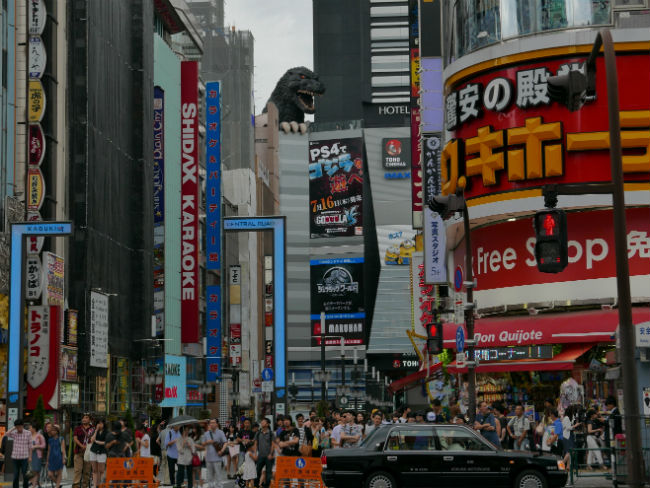 Don’t feel like stepping into the hotel? Fret not because you can still see the head of Godzilla peering over Shinjuku from the street leading up to the Shinjuku Toho Building. The roar and steam of the monster can still be heard and seen, and it looks as if a real Godzilla was about to wreak havoc in Shinjuku! 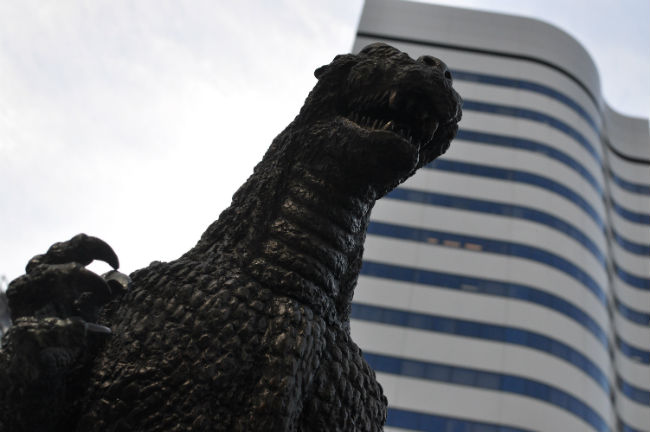 The old statue on Hibiya Chanter square had been replaced with a new one.
Image credit: Azchael on Flickr / CC BY 2.0

Godzilla is Toho film studio’s classic character so it is natural that places, where you can sight the Big G, are often properties belong to Toho. Unveiled just in March 2018, this Godzilla statue is located on the square in front of the Hibiya Chanter shopping complex, in which you can also find Toho’s cinemas.

Standing 3-metre tall, the statue depicts the monster in “Shin-Godzilla” (2016) which was a megahit, along with a quote from the movie which goes “mankind must co-exist with Godzilla”. A script and storyboard from the first 1954 Godzilla movie can also be seen here. Notably, this is not the first Godzilla statue erected in the area and is actually a replacement for a smaller statue which had occupied the square since 1995. The current new statue is twice the size of its predecessor. Following its introduction, the square which was previously known as “Nemu no Hiroba” has also been renamed Godzilla Square.

Godzilla Square
Access: 2 to 4 minutes’ on foot from Hibiya Station on the Hibiya, Chiyoda, and Mita Lines. 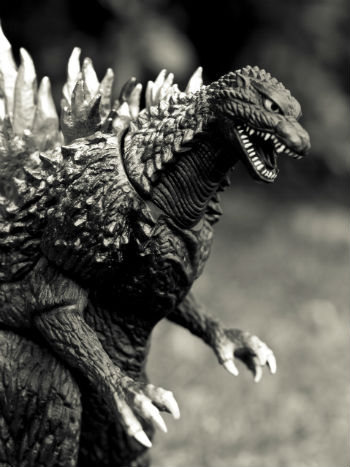 Located on the first floor of Shinjuku Marui Annex (新宿マルイアネックス) building, this world’s first official Godzilla store sells an assortment of Godzilla-themed goods, including T-shirts, DVDs, figurines, stationery, backpacks, and accessories. There are about 500 kinds of products sold here.

Fans would be thrilled by the many limited edition items on offer, but basically, the store has something for everyone and every budget: from vending machines capsule toys to limited edition Godzilla medals. Besides goods that feature the classic ferocious image of the Big G, you can also find items that show an unusually cute, cuddly side of Godzilla. If you are already in Shinjuku for the Godzilla head mentioned before, you may as well drop by this store to pick up a couple of Godzilla collectables as memorabilia. 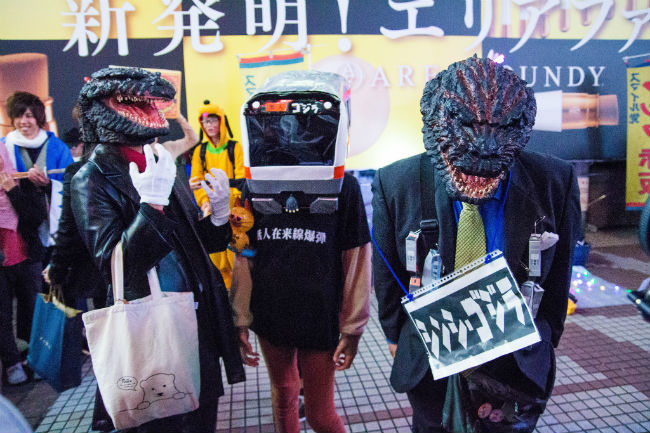 While still often being seen as a joke by many audiences, Godzilla was created out of a very Japanese context and there is a deeper meaning behind its popularity. Originally imagined as a metaphor for nuclear weapons, Godzilla references a destructive monster of our own making that will come back to haunt us someday.

For Godzilla fans, one of the unique experiences to have in Japan, especially in Tokyo is to track footsteps of the Big G, even though for non-fans, I believe you will enjoy sighting this beloved monster just as much too. I hope you would have fun visiting the places recommended in this article!