Exploring the Tottori Prefecture in Japan

Beautiful Sunset Spots in Japan No ratings yet. 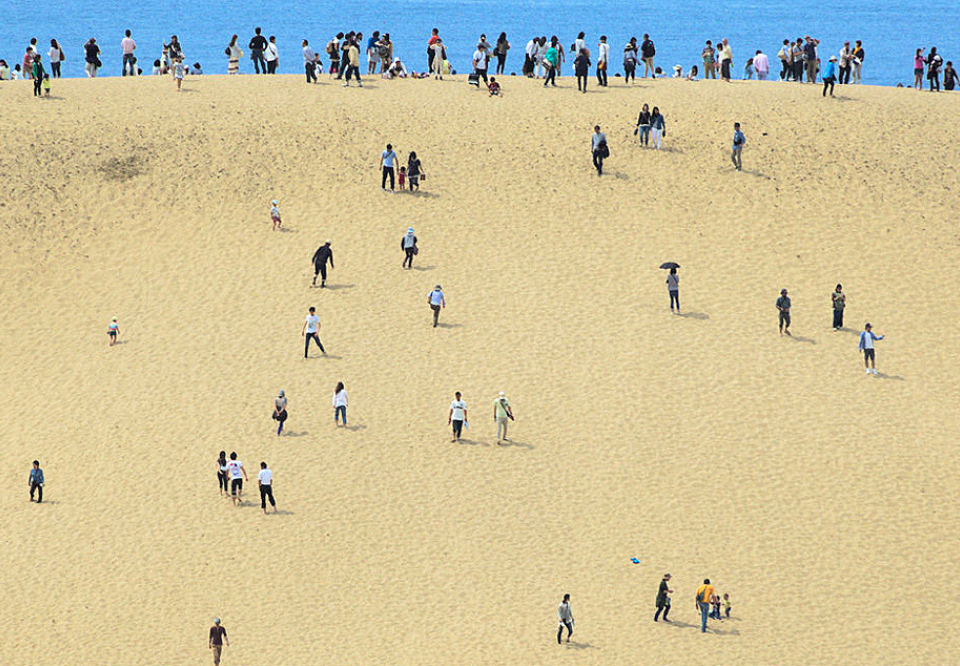 Most Malaysians or Southeast Asians are safe travelers who will maximize their vacation to four or five days when they plan to visit Japan. However, with the trend of cheap airfares and travel packages, more and more people are traveling to Japan, namely to places like Tokyo, Osaka, Kyoto and all over Sapporo.

But for those wanting something out of the ordinary or something different, here is a destination that has caught some attention over the last few years in Japan. Introducing Tottori, one of the lesser visited prefectures of Japan, and narrowed down for you here. 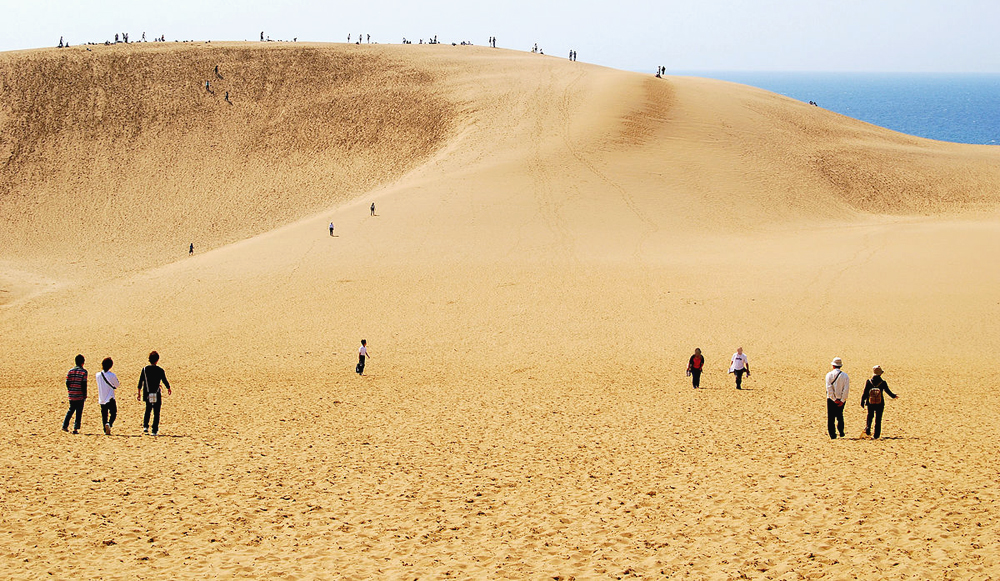 The sand dunes that attract thousands of visitors. Photo Wikipedia.

What Is Famous In Tottori, Japan?

With any destination, the first thing Malaysian or most tourist will as is what are the famous places in a destination? And for Tottori, The most iconic destination is no other that the world famous Tottori Sand Dunes.

Depending on what you want out of your holiday in Japan, most first timers will head to popular cities, but Tottori is one of the rising destinations that can also be a break from the normal Japanese cities that everyone visits.

Anyway, below are just some of the many popular places to visit when you are here. Most of these places require some traveling, and they are not too far apart. 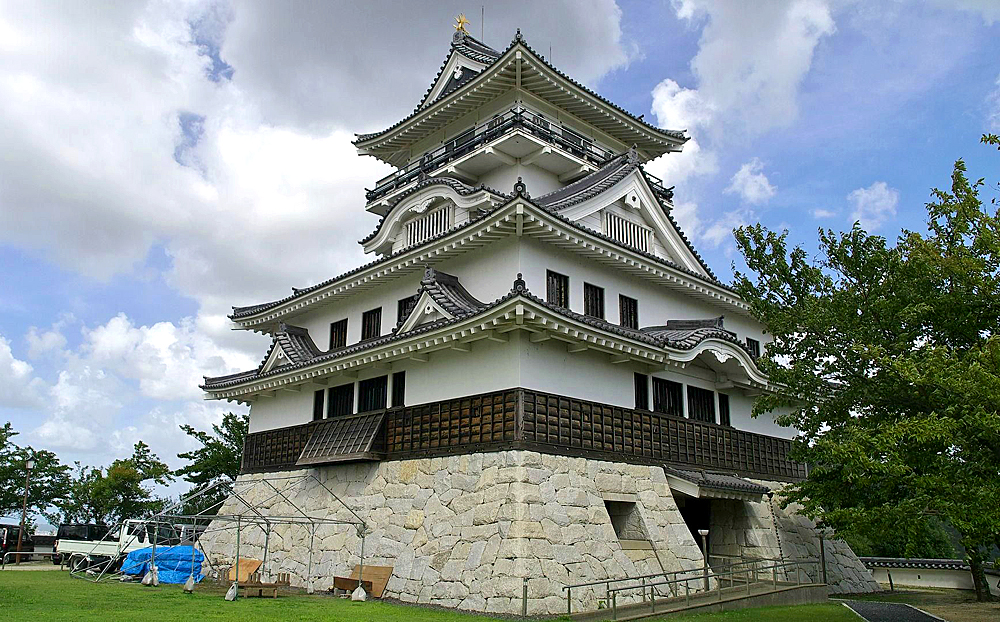 All over Japan, castles are the national treasure of the country, and there are multiple castles spread around the country. In Tottori, the famous castle is known as the Kawahara Castle, built in 1580, destroyed in the wars, and finally reconstructed back to its glory in 1994.

If you love Japanese castles, this is one to add to your list of must visit places, otherwise, if you just want to explore the other places of Tottori, then make a quick visit here to tick this off your list. 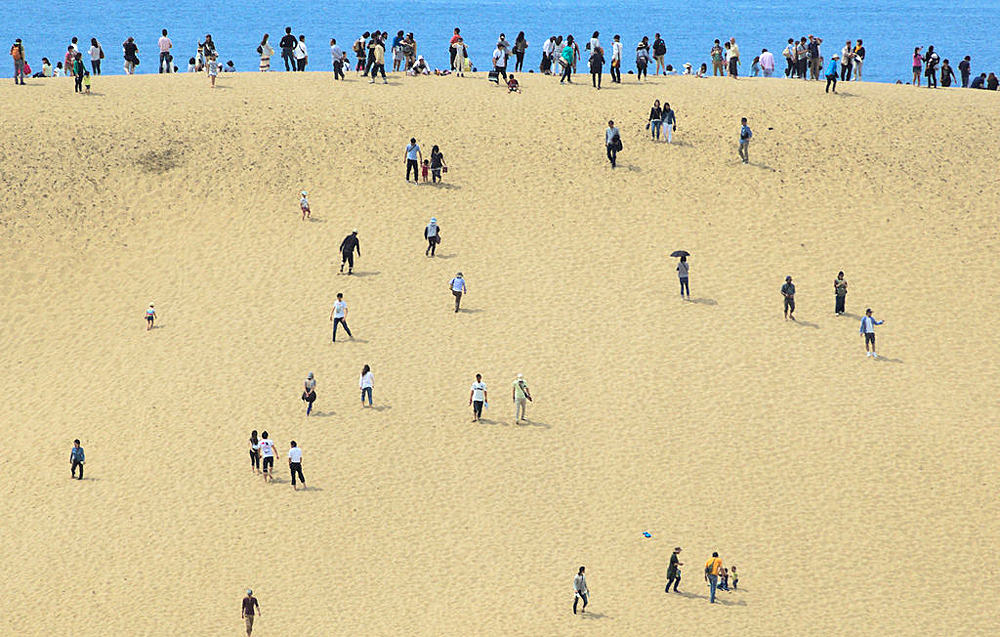 This is the number one reason why many tourist visit Tottori, and it is the magnificent sand dunes which are located just outside the city center. The Tottori Sand Dunes span roughly 16 kilometers of coast along of the Sea of Japan and are up to two kilometers wide and 50 meters high.

This is also the largest sand dunes in the entire Japan and it is part of the Sanin Kaigan National Park here. It’s a circus here, and you can find camel rides, horse carriage rides and for those who only want to come here to take photos, there is an observation deck of the Sakyu Center, which is connected with the sand dunes by a chair lift. 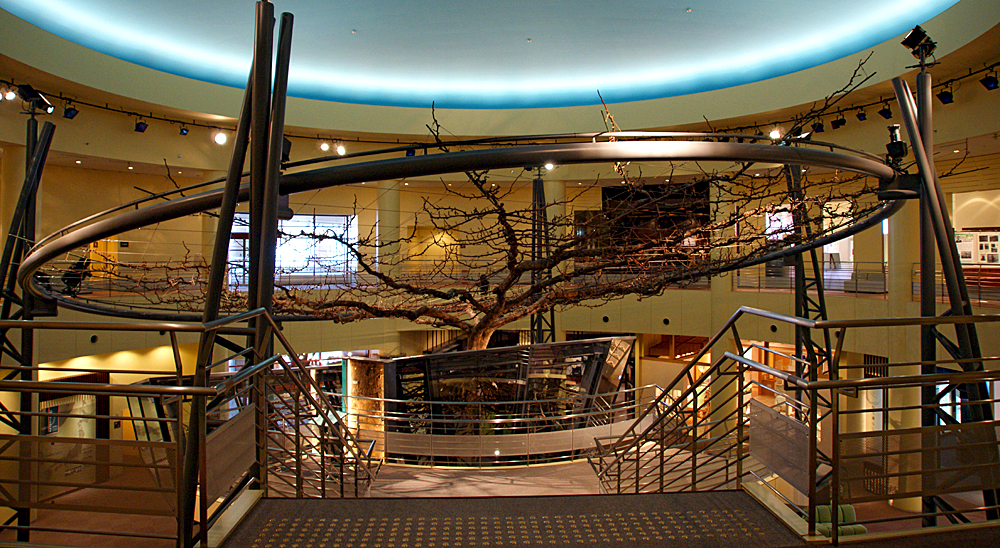 Inside the prefectural museum. Photo Wikipedia.

Honestly, why do museums always make lists like these? Well, not everyone is a lifestyle traveler, and at times many bring their parents along on trips to Japan. Yes, some travelers would love to know more about the place they visit, and what better a place than a local museum.

So over here in Tottori, the best museum to visit is the Tottori Prefectural Museum, which showcases the natural and cultural history of Tottori Prefecture. Information is in English too, so if you are up for this challenge, why not spend a couple of hours here to learn something about Tottori. 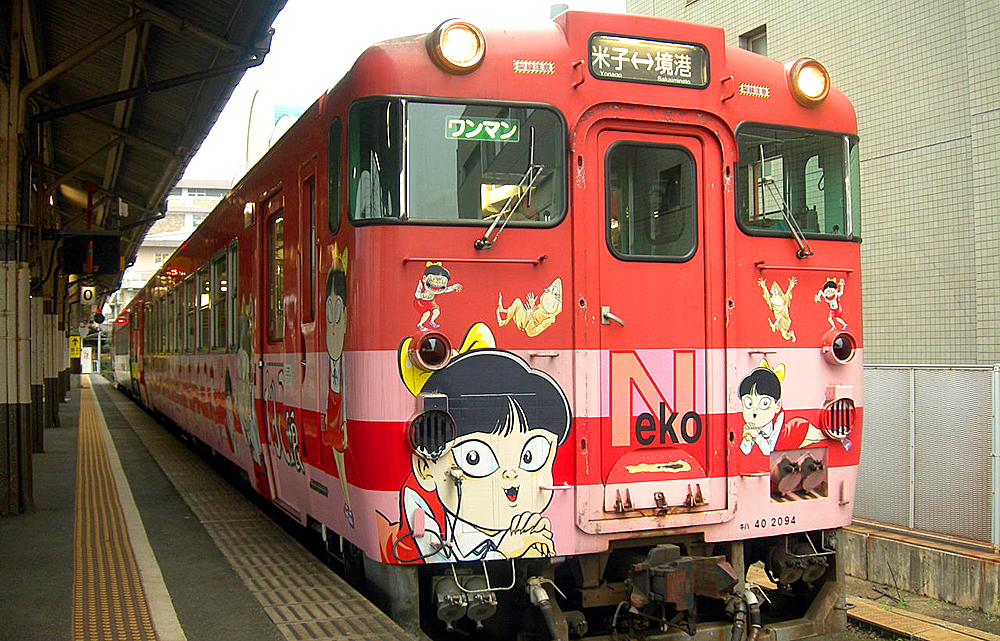 One of the cute character train in Tottori. Photo Wikipedia.

For some tourist or travelers, they are fascinated with train journeys and in Tottori, there are some special train services that feature nostalgic styles and also modern day anime themed trains. One of the most popular is the Yokai Train, which comes decorated with the GeGeGe no Kitaro manga characters and another train with the Detective Conan manga character by Gosho Aoyama, who comes from the town of Yura in Tottori.
Another train is the nostalgic and classic Wakasa Railway service, which features the 1930’s steam locomotive, that still operates as a tourist attraction. Not only that, the entire station is like walking into history, with memorabilia dating back to the 30’s era. 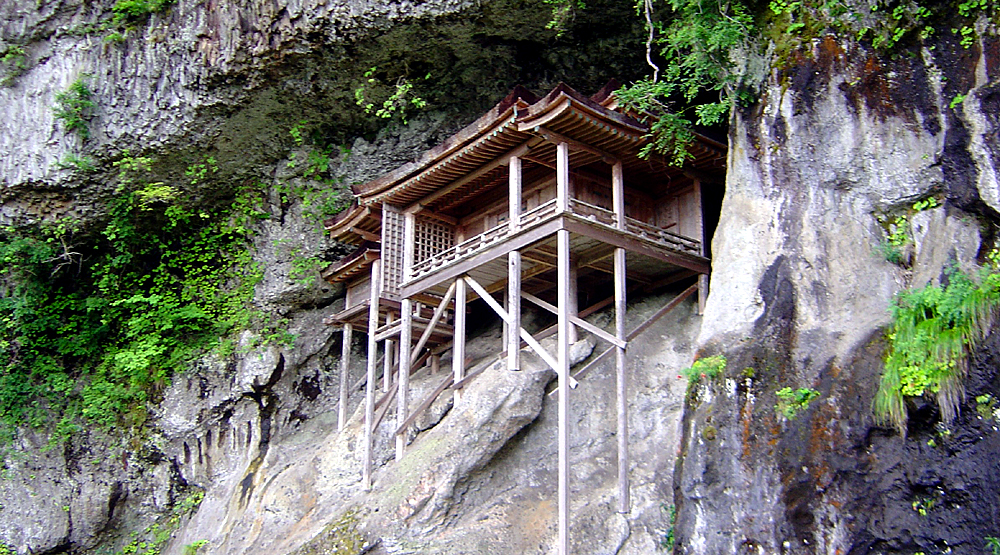 Any Japanese city or prefecture is never complete without their famous shrines or temples, and here in Tottori, the Kannon-in Temple is a 400 year old Japanese Buddhist temple which was known to exist as early as 1603. The beauty about this temple is not only the structure, but the lush Japanese gardens surrounding the temple grounds, making it perfect for photography.

Another popular Japanese Buddhist temple is the Mitokusan Sanbutsuji Mountain Temple, which is built into a mountain, 900 meters above ground and build in AD 538–710. This amazing temple is a national heritage and is easily viewed from the ground. For those wanting a closer look, you are required to climb up, which I do not recommend. 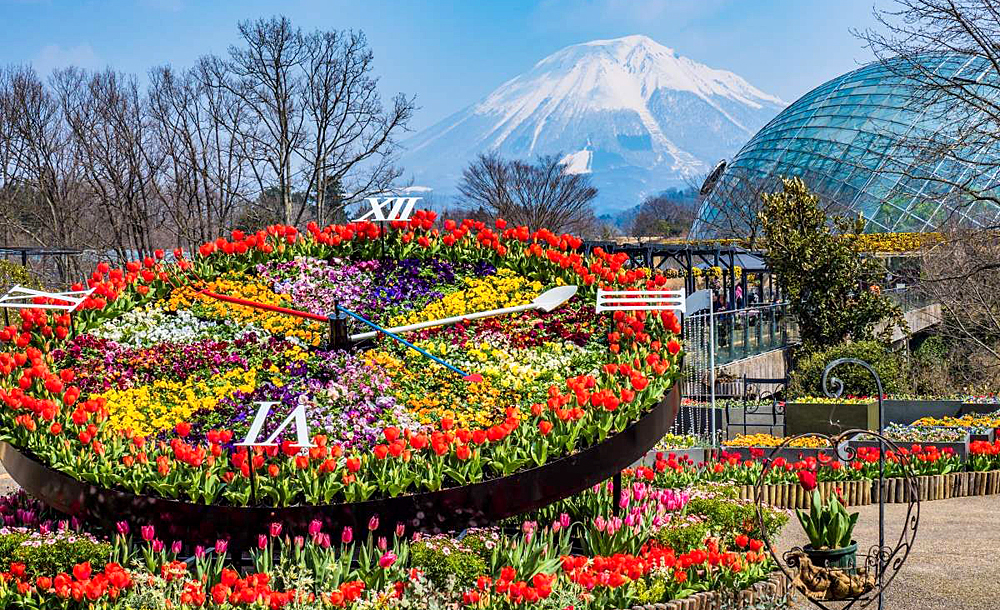 Parks and Gardens in Tottori

Again, Japanese parks and gardens are not to be missed at any city or prefecture, and here in Tottori, of the well known parks is the Ochidani Park, located in a narrow valley near the center of Tottori city. This park also offers an interesting history museum, an historical shrine, and a nature preserve.

The Tottori Prefectural Flower Park is another not to miss, as this is a modern concept park with fully covered walkways, tropical domes, full facilities and is famous for their lily collection. During the summer, a beautiful flower hill becomes the main attraction of this park.

Overall, there are around 20 other parks located in the city area of Tottori, therefore depending on the season you are visiting, the best times would be during Summer and Autumn. In winter, I would recommend skipping the parks and going to other places instead. 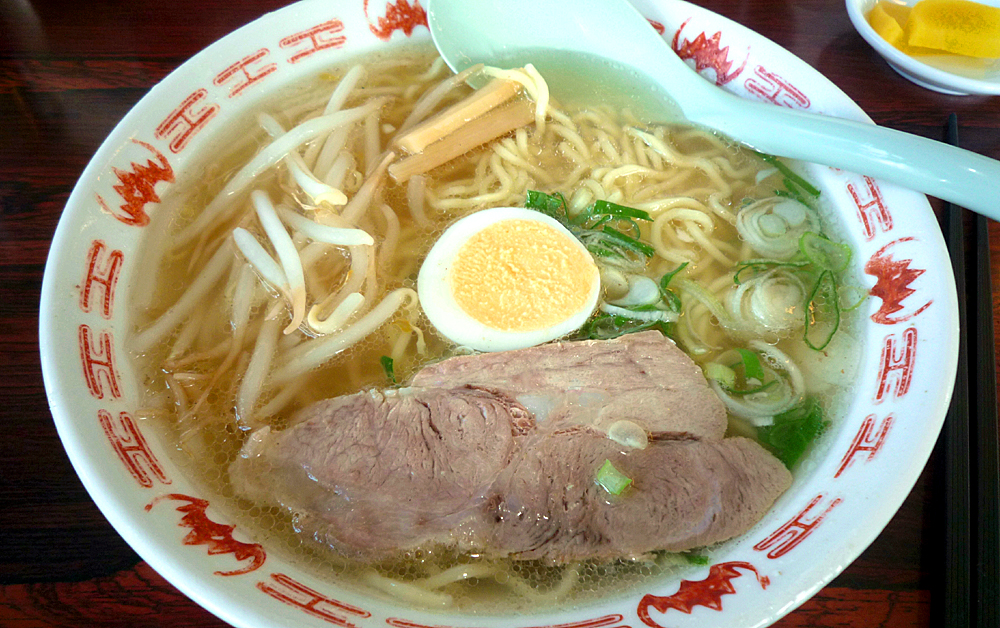 With any journey, there needs to be food involved for Malaysians, and without fail, Malaysians are literally in love with Japanese food. So, in Tottori, the most famous dish here is the ramen noodles, done in their own style.

Of course, there are many other popular dishes, where they are located around the prefecture and listed below for your convenience.

Tottori Gyukotsu Ramen – Over here, this is the more popular local dish and it gets its distinctive flavoring from boiled beef cartilage. This Japanese noodle dish first appeared in Tottori restaurants in the early 1950s, and has spread all over the region making it one of the mus-try dishes here.

Tottori Curry – This is a Japanese curry rice dish only found in Tottori Prefecture, that is filled with plenty of ingredients from the mountains and the sea. The Tottori Curry portions are generous and makes the general Tokyo and Osaka curry rice dish look pale in comparison. 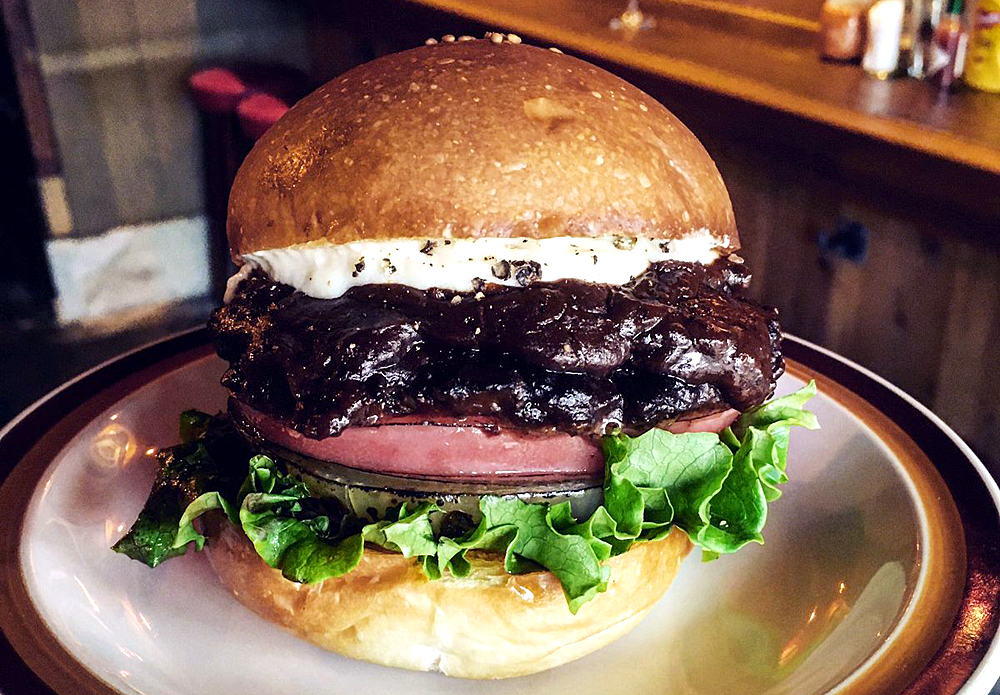 Tottori Matsubagani (Snow Crab) – The Matsubagani is the ultimate in the taste of winter in Tottori, and is a very highly sourced delicacy for many food lovers, namely seafood.

Tottori Burger – Over here, a special local hamburger is found almost everywhere, and these deluxe burgers are served with the special ingredients in the prefecture such as snow crab, tuna, squid and even Tottori Wagyu beef. Who doesn’t love Japanese burgers?

Tottori Harbour Seafood Market Karoichi – In Japan, fish markets are a huge thing, all because of the unique and fresh seafood that is caught and traded daily, just like the famous Tsukiji Market in Tokyo. Here in Tottori, there is also a harbor seafood market, where you can see the fresh catch, but them and also take them to restaurants facing the market to have them freshly cooked for you. 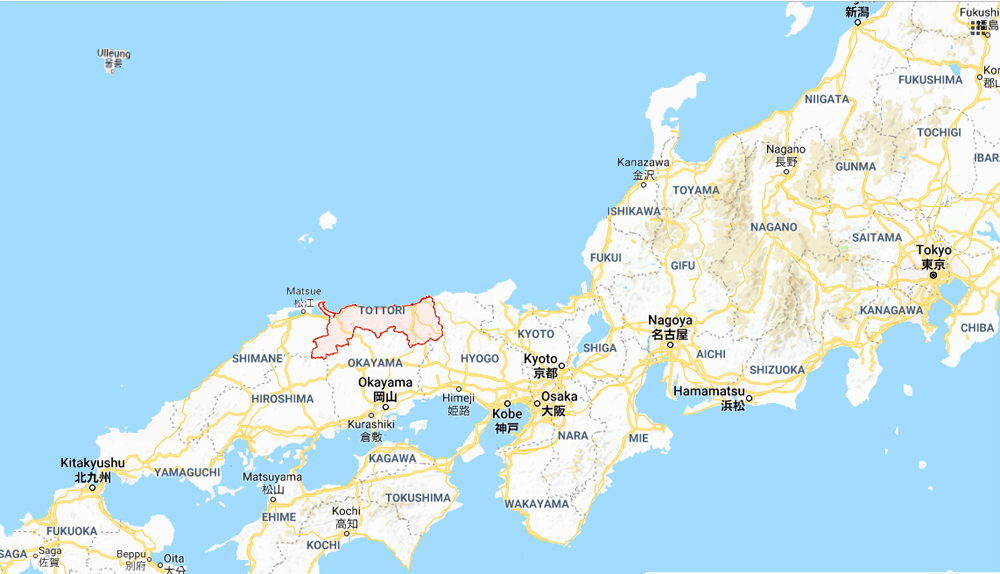 How To Go To Tottori?

To be very honest, Tottori is not your regular one flight destination, and you require additional flight, train or bus to get here. This makes the destination even more exciting when there are less tourist, compared to larger and more accessible cities in Japan. Below are examples to get here;

From Tokyo: From Tokyo Station, there is a bullet train that takes around five hours one way, and the ticket cost you about ¥20000 per person one way.

From Osaka: The Tokaido Bullet Train takes only three hours one way, and is priced at ¥3700 per person.

From Okayama: You can catch the express or normal JR trains that operate between Okayama and Tottori City. The general train makes stops at cities like Yonago and Matsue and Izumo. Express trains are usually faster, but cost a little more. 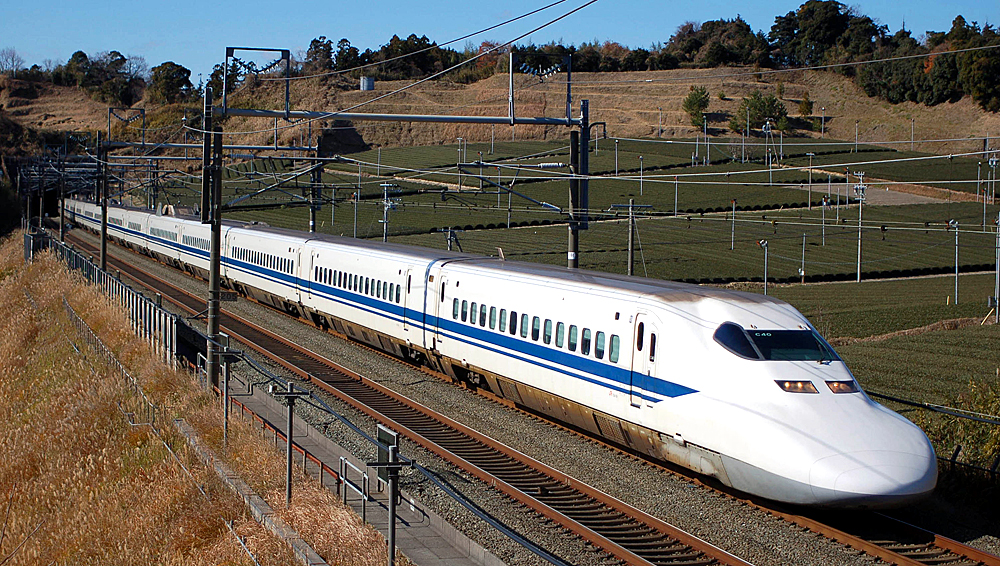 From Tokyo: There is an express bus service which runs from Hamamatsucho in the Minato district of Tokyo, all the way to Tottori. The one way journey cost ¥T10,200 and takes around eight to nine hours with stops along the way. To book, you can contact – Tel: 03-3743-0022

From Osaka: The bus from Osaka to Tottori will take about three hours one way and costs ¥7500 per person.

From Okayama: The bus from Okayama takes about two hours and thirty minutes one way to Tottori.

If you are adventurous enough, you can rent a car and self drive from various cities, but the best place to do this is from Osaka, as it only takes you about two and a half hours one way to Tottori. If you plan to make stops along the way, your journey can end up being a four to five hour journey.

Personally, I would recommend doing a self drive, as it is one of the best ways to experience and see Japan’s out of the city areas, villages, towns and natural landscapes. Also, this is best done in a group or family.