Go Back to College! Visiting the University of Tokyo Hongo Main Campus 5/5 (1) 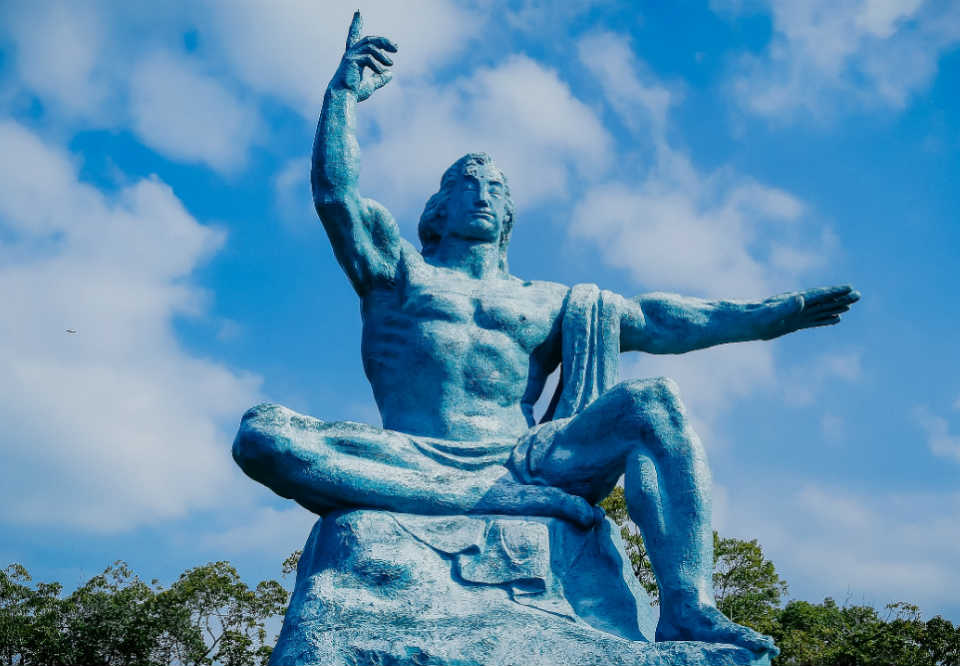 Located on the island of Kyushu in western Japan, Nagasaki has played an important role as a hub for international trade since the mid-16th century. As a result of this, it was exposed to many foreign cultures which ended up giving the city an East-meets-West charm.

Notably, Nagasaki is home to a relatively large number of Christians, a legacy from trade with the Portuguese who brought not only trade goods but also Christianity. You can find many churches and Christian sites across Nagasaki.

Also, no visit to Nagasaki would be complete without visiting the memorial sites related to the atomic bombing which testify the city’s suffering and recovery as well as its hope for world peace.

In this article, we will continue to look at the remaining six places, after Dejima, Nagasaki Shinchi Chinatown, Glover Garden, Dutch Slope, Kofukuji, Sofukuji, and Confucius Shrine in Part 1 of the article. They not only offer a glimpse of the city’s rich past but also tell the story of the resilience of the people in Nagasaki. 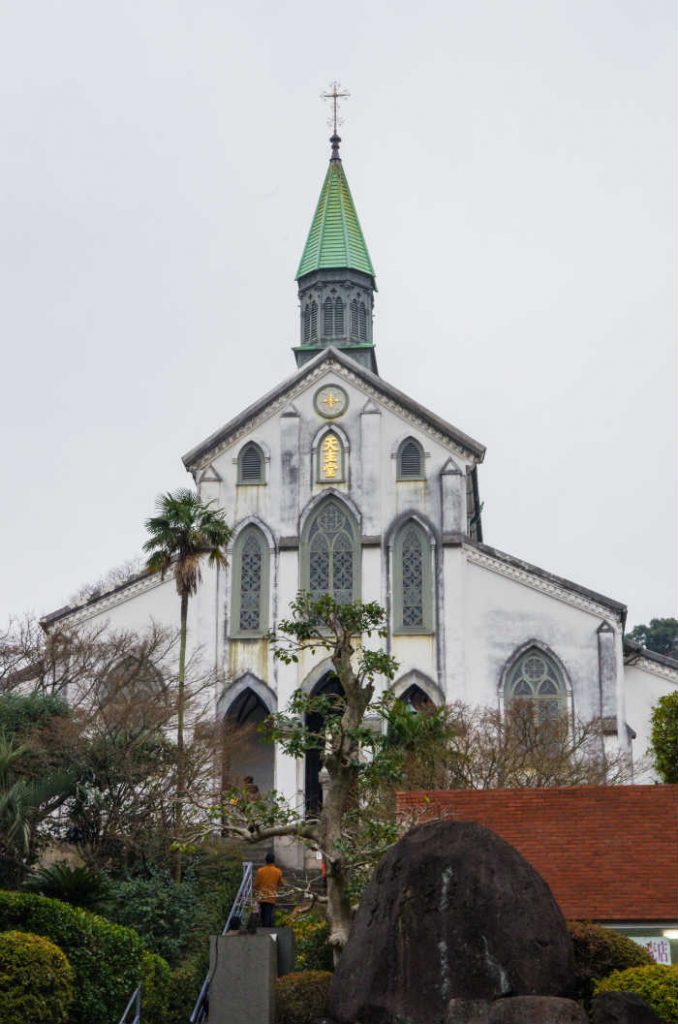 This oldest church in Japan was built in 1864 by a French missionary for the foreign community living in the city. Its official name is The Basilica of the Twenty-Six Holy Martyrs of Japan in memory of the 26 Catholics who were executed in the city in 1597. It was designated as a national treasure in 1933.

It is also famous for the discovery of Kakure Kurishitan or Hidden Christians, who came to the church soon after its officiation to confess their beliefs to the priest. It was only known that these believers had been practising their faith in secret during the period when Christianity was banned (1614-1873). 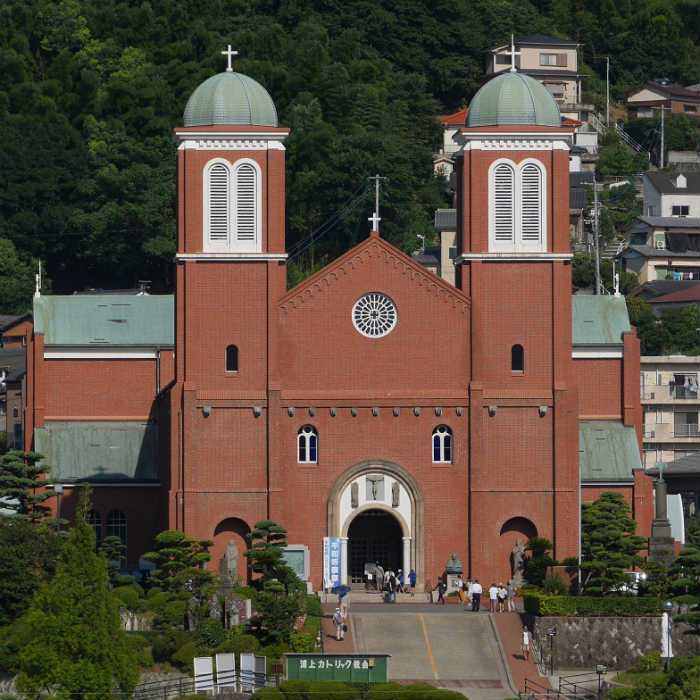 The cathedral was once the largest Roman Catholic church in East Asia when it was first completed in 1925. Built by the Christian community in Urakami who suffered persecution following the ban on Christianity, it was however destroyed in the atomic bombing. The current building is a replica of the original church completed in 1959. Remnants from the original church are displayed here, including statues of saints, remains of the bell tower, and a wooden statue of Virgin Mary. 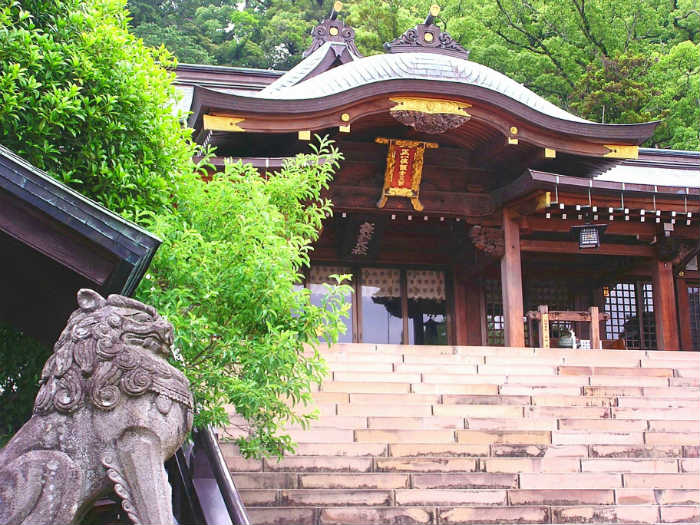 The original Suwa Shrine was burnt down by Christians who have also destroyed many other Shinto and Buddhism buildings in the region at the time. It was then rebuilt in 1625 amid the authority’s effort to revive Shinto faith and stop the spreading of Christianity. Today, Suwa Shrine is known as the tutelary shrine for Nagasaki.

Located on Mt. Tamazono, you can catch breathtaking views of the city here. The Nagasaki Kunchi Festival, one of Nagasaki’s largest festivals is also held here in October every year. Don’t forget to check out the interesting komainu or guardian lion-dog statues to which you can make your wish to, they are the shrine’s popular photography spots!

The Peace Park consists of two locations: one is the hypocentre of the explosion, and another one featuring the famous Peace Statue along with the Fountain of Peace. 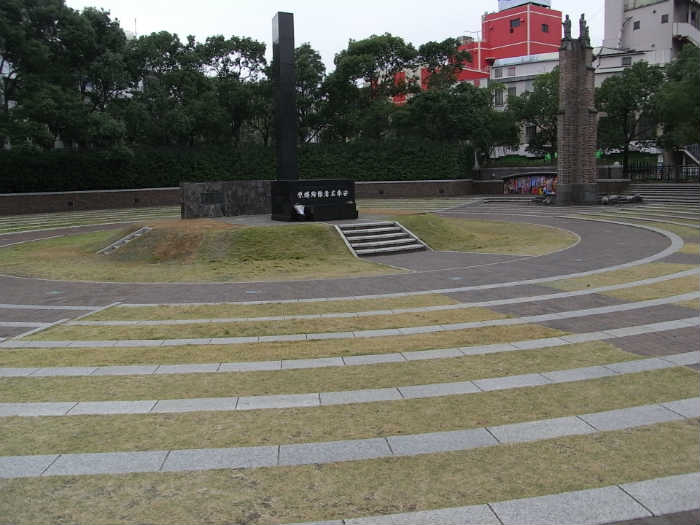 The monolith and pillar of the former Urakami Cathedral.

The Hypocentre Park 原爆中心地公園 features a simple black monolith that marks the ground zero of the atomic explosion, and the damaged pillar of the former Urakami Cathedral is not far away. A layer of soil from the explosion with remains of roof tiles, bricks and pieces of glass is also exhibited here.

To the north of the hypocentre is the site of the iconic Peace Statue and the Fountain of Peace. Every year, a memorial ceremony is held here on August 9 to mark the anniversary of the atomic bombing. 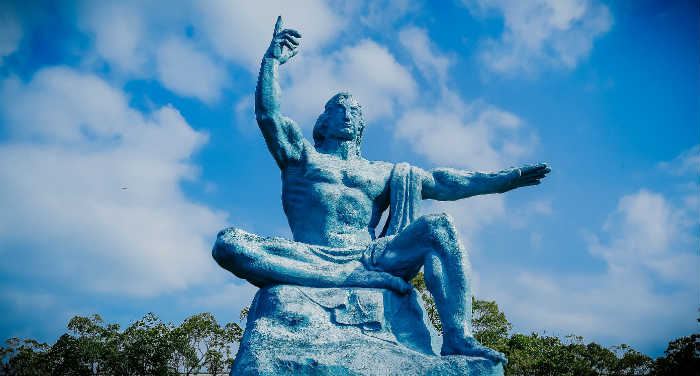 The Peace Statue is a symbol of Nagasaki as a city of peace; the sky-pointing right hand symbolizes the threat of the atomic bomb, the stretching left arm represents eternal world peace, and the slightly-closed eyes mean a prayer to the souls of the victims perished in the incident. The fountain, on the other hand, represents an offering to the victims who died craving for water in the aftermath of the bombing.

Access: From the Matsuyama-machi (松山町) tram stop (tram lines 1 and 3), the Hypocentre Park is 1-minute away on foot, the Peace Statue is a 3 minute’s walk from the tram stop. 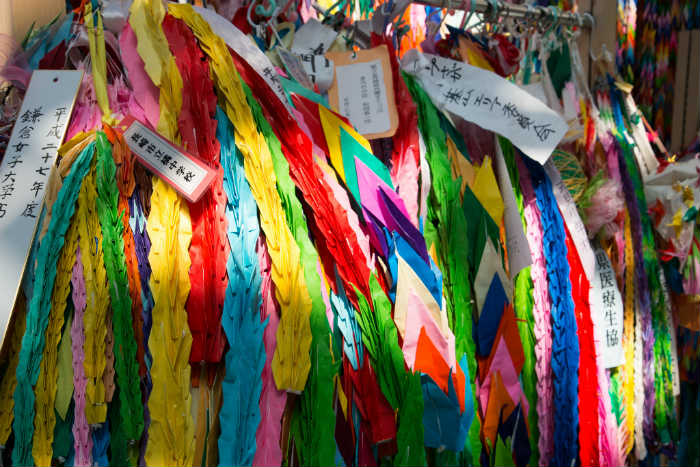 Thousand origami cranes or senbazuru, a symbol of peace, are a common sight at atomic bomb memorials in Japan.

Here you can learn about the fateful event from comprehensive exhibits about the bombing and its devastating effects, the city’s recovery, and the issues of war and nuclear weapons – all presented in the form of a story. While some of the graphics displayed can be quite upsetting, they serve as a powerful reminder of the importance of peace.

The Nagasaki National Peace Memorial Hall for the Atomic Bomb Victims 国立長崎原爆死没者追悼平和祈念館 is adjacent to the museum. Featuring remembrance hall and exhibition space displaying memoirs of survivors, it is a beautiful yet solemn space for visitors to mourn the victims of the blast. 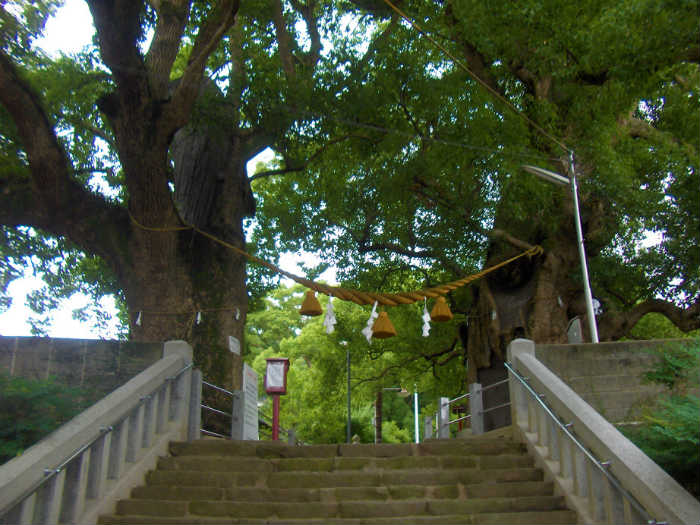 Located within one kilometre away from the atomic bomb hypocentre, Sanno Shrine was built in 1638 and is known for its one-legged torii gate, which the other half was destroyed during the bomb blast.

Also becoming the symbol of reborn is the shrine’s camphor trees, which were burnt and badly damaged by the explosion’s shock wave but still managed to survive and sprout new growth. Designated as “living memorials” by the city in 1969, they are still standing handsomely at the shrine today. 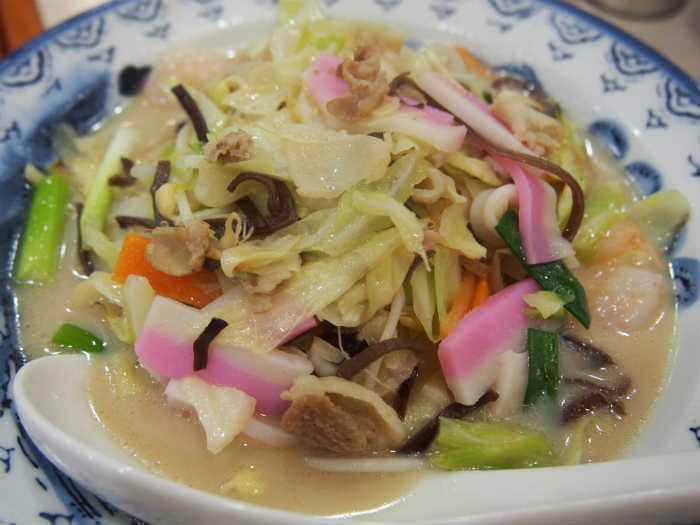 Champon ちゃんぽん/ Sara Udon 皿うどん – a hearty dish of noodles with seafood, meat and plenty of vegetables, the difference is that champon is noodles cooked in rich pork broth whereas sara udon is crispy deep-fried noodles topped with seafood, meat and vegetables. A representative of Nagasaki’s Chinese cuisine, so the best place to try these dishes is at Chinatown.

Toruko rice トルコライス – an interesting dish of pilaf rice, spaghetti, and tonkatsu (pork cutlet) with sauce, all served on a single plate. Although the name of the dish translates as Turkish rice, the dish hardly has any relation with Turkey and so remains a mystery why is it named so. 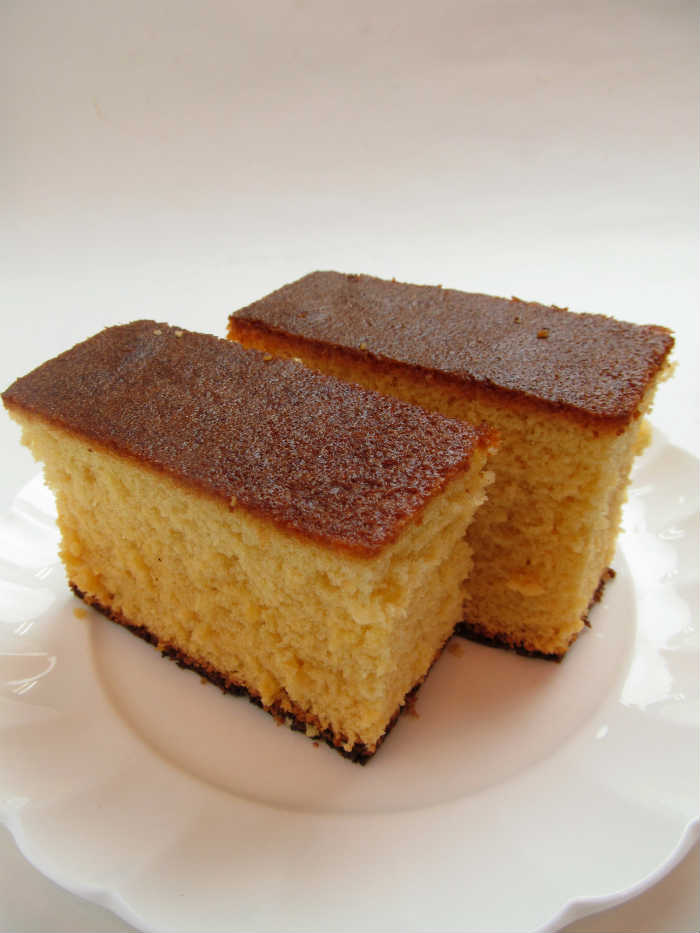 Castella カステラ – the sponge cake was brought into Japan by the Portuguese and has been refined by the Japanese over the years. Available in many flavours such as original, green tea, honey, and chocolate, it is popular among visitors as a souvenir from Nagasaki.