2 Days 1 Night Itinerary to Shirahama No ratings yet. 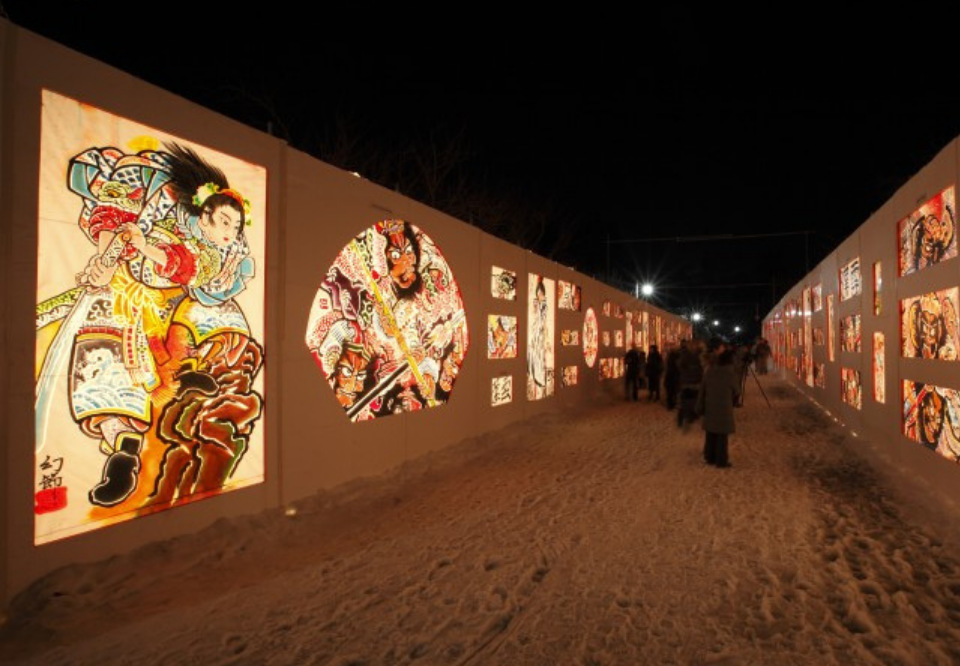 Aomori is one of the Japanese destinations that has been getting a lot of attention in the last few years, and mostly thanks to social media postings of travellers who have been visiting this winter wonderland.

First of all, you will be asking where is Aomori? This region is located at the north most part of Kyushu Island, the main largest island of Japan. It is also neighbouring Hokkaido Island, where travellers can travel between the two islands.

So, why are many people talking about Aomori or visiting this beautiful snowy prefecture? The number one reason is to experience the unique snow which is touted to be the best in Japan.

Apparently, the snow that falls here is powdery and perfect for all kinds of snow activities. Another reason is also for the unique snow related festivals that are held all over Aomori during the winter time.

Winter Festival at A Factory in Aomori. Photo by Aomori Prefectural Government Website.

What To Do In Aomori?

Well, for first timers, Aomori offers many snow-related activities but there are some general things that you can do besides just looking at snow. Most visitors would travel to the Hakkoda Mountains for all kinds of snow-related experiences.

But for those who want a balance, you should explore both the mountains, city area and other places around Aomori.

Furukawa Fish Market – This is highly recommended for anyone who loves Japanese seafood, as the markets are where you can see and savour some of the freshest dishes. One recommended dish to try at this market is the Nokkedon or seafood donburi. The market is located near the JR Aomori Station and you can walk.

A scene at the Furukawa Fish Market. Photo by Sol March.

Aomori Showa Daibutsu or the Aomori Big Buddha is another major tourist attraction as this is the largest seated Buddha in all of Japan. This statue is also located in the Blue-Green Dragon Temple in Aomori City and is probably one of the busiest tourist attraction here. The Big Buddha is 21.35 meters tall and weighs in at a whopping 220 tons or about 200,000 kilograms.

Skiing and Snowboarding in Aomori – Probably the most popular thing to do here and you can find a number of ski resorts around Aomori. Those who have never tried this winter sport can do so here, while experienced skiers have many interesting options to choose from.

View of the Hakkoda Mountains covered in snow.

Snow Trekking or Snow Drifting – This is where you have the opportunity to experience the harshest snowy and windy conditions in deep winter. Professional guides take you on a walking experience through heavy snowfall and chilling winds. It is not recommended for those who cannot stand extreme cold conditions.

Tsugaru Snow Winter Train – This 45 minute snow train ride lets travellers experience the picturesque snow landscapes of Aomori. During the winter, a special Winter Stove Train operates three times a day where coal is used to heat up the train coaches as you journey along the winter landscape.

Winter Onsen at Aomori – No visit to Japan is complete without experiencing a traditional Onsen or Japanese hot spring. Come winter, many travellers will at least try one of the onsen at any destination they visit, and at Aomori, there are quite a few to try.

There are also many shopping areas, museums, cultural buildings, a factory outlet and local markets that you can visit all over Aomori. This depends on what kind of experience you want to have, you can simply pick up a leaflet on things to do in Aomori when you are there. 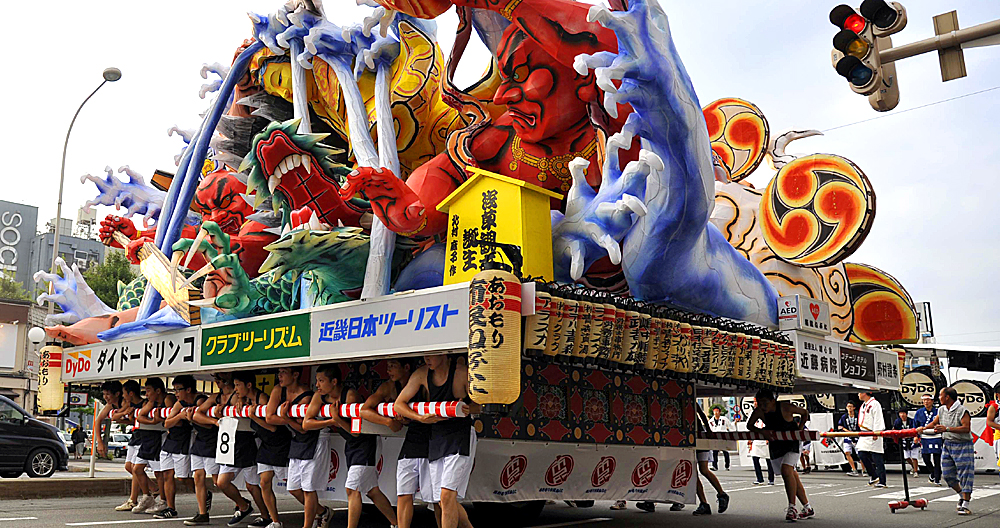 The Nebuta Matsuri Festival in Aomori. Photo Misawa Air Base.

For festival lovers, there are festivals held throughout the year, and every season, there are a number of different type of festivals. However, I am going to highlight a few of the winter festivals here in this section.

Towadako Fuyu Monogatari or Lake Towada Winter Story Festival is one of the most well-known events and is held in Towada City in Aomori. This beautiful festival uses the snow and ice, combined with lights to give visitors an enchanting experience. The theme of fantasy will be held from 1st to 4th February. More Information.

Hirosaki Castle Yuki-Doro Festival is also known as the Snow Lantern Festival, held in the castle town here. Snow lanterns are crafted by the locals which are put on display, and the place comes alive in the nights with beautiful illuminations on the castle and its surrounding. There is also a projection mapping show which is not to be missed during the festival, which is held for five days in early February. More Information. 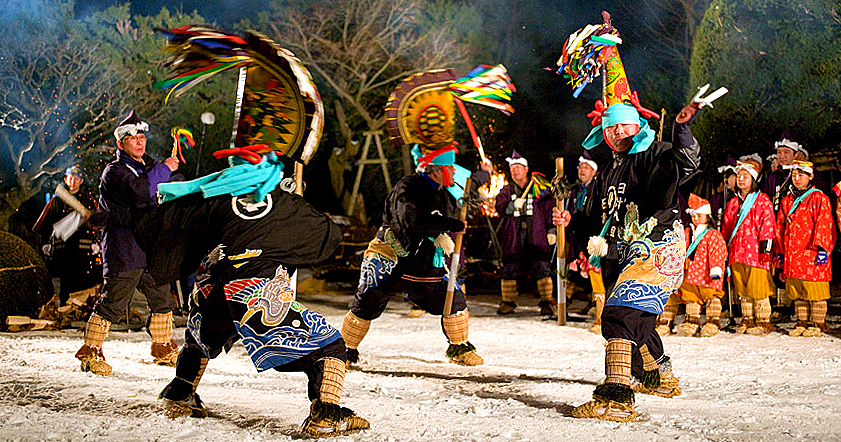 Hachinohe Emburi or the traditional folk harvest festival is a historical event that dates back over 800 years in this region. Visitors will have the chance to see locals performing a dance ritual to express prayers for a good harvest. It is now designated as one of the important intangible folk cultural festivals in Japan. This event also takes place from 17th to 20th February. More Information.

Throughout the year, there are also many other festivals, and the Nebuta Matsuri is one of the largest in the summer time of Aomori.

One of the futuristic Tohoku Shinkansen trains to Aomori. Photo by Kossy on Flickr/CC by 2.0

How To Get To Aomori?

Aomori has two airports which only provide domestic flights, and a couple of international flights that arrive from South Korea.

For anyone wanting to visit this beautiful destination, your best route would be via Sapporo or Tokyo, and then take a domestic flight or train journey, which is highly recommended.

Planes at the Aomori Airport. Photo by Aomori.com.

Trains From Sapporo – There is a connecting train service from Sapporo to Shin-Hakodate-Hokuto Station in the south of Hokkaido. From the transit station, you connect with the Tohoku Shinkansen or bullet train to Shin-Aomori Station. This journey will take you around six hours one way, but it will be a very interesting journey. This journey will cost ¥13,500 per person.

Flight From Sapporo – For those with limited time, you can always take a 50 minute flight from Sapporo with JAL or ANA, which will cost you around ¥45,000 per person. There are five daily flights from Sapporo to Aomori.

Trains From Tokyo – Though Tokyo is much further than Sapporo, for some strange reason, the direct bullet train only take you four hours one way from Tokyo to Aomori. This high-speed train journey will set you back around ¥17,000 per person, but a scenic journey guaranteed.

Flight From Tokyo – From Tokyo, a direct flight takes you only one hour and twenty minutes to Aomori, and there are six non-stop flights per day from Tokyo. Flight ticket is around ¥38,000 per person.

Flight From Osaka – For the rare case of travellers wanting to get to Aomori from Osaka, the flight is about four hours and is a connecting flight. However, the price is quite high from Osaka.

Self Driving To Aomori – Though this method has been around for a long time, it is only recently that more travellers are starting to embark on self-driving. This is a hassle-free method but requires time and an international driving licence.

Self-driving in Aomori with a lot of snow.

Couples or small groups will find self-driving fun, experiential and will see a totally different side of Japan. To do this, you can book through a number of travel agents or car rental companies in major cities around Japan.

The beauty about self-driving is that you can pick up your car in one city and drop it off at another city. Price may be a little higher, but if shared among a group of four, it can be cost effective.

However, for those who have never driven in snow, you should be extra careful and get the proper tires and even tips for doing this. 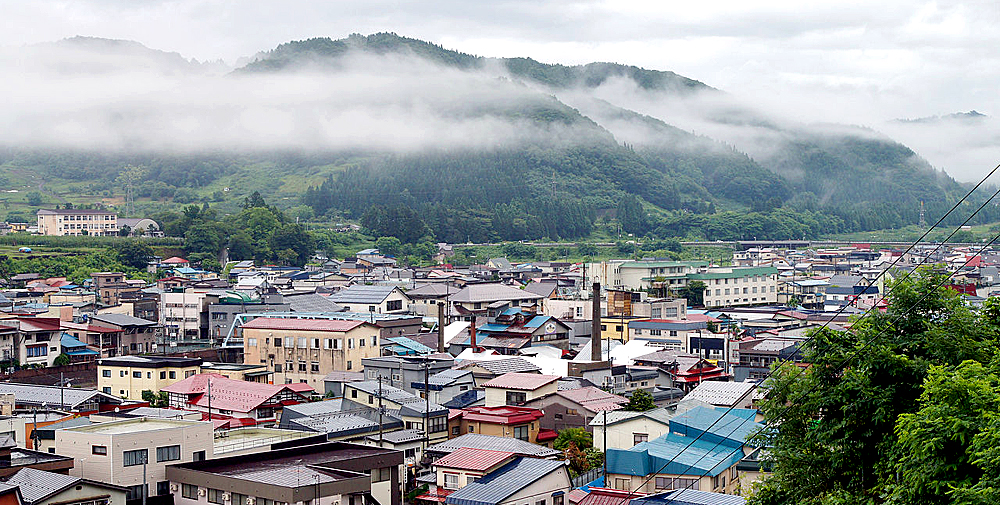 A beautiful scenic view from an onsen in Aomori, Japan. Photo Wikipedia.

Aomori is indeed one of the up and coming tourist destinations, namely for many who have visited Japan before, and to places like Tokyo, Kyoto, Osaka or even Sapporo. In many cases, travellers fall in love with Japan and will make a second or third trip back.

Some travellers will still re-visit the same destinations, but there are many others who want to experience a different part of Japan, an Aomori is one of them, especially in the winter. The great thing about this prefecture is that it is still new, hence you will not be seeing many tourists here, which is awesome.