Important Notes to Learn Before Attending Japanese Tea Ceremony No ratings yet.

Wandering in the Small Prefecture of Fukui No ratings yet. 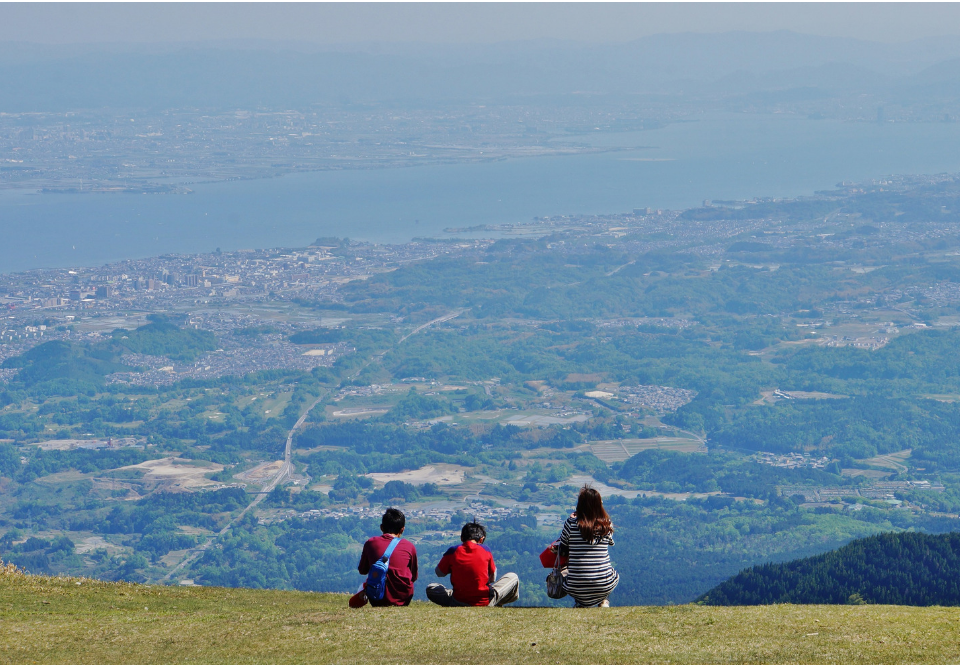 Lake Biwa 琵琶湖 is a freshwater lake in Shiga Prefecture of the Kansai region. Taking up 1/6 of the area of the prefecture, this largest lake in Japan is named “biwa” because of the resemblance of its shape to the traditional Japanese music instrument.

It is also one of the oldest lakes in the world, formed over 4 million years ago, and has been playing indispensable roles in supporting the lives of people in the region since ancient times, from water to food to transportation of goods. 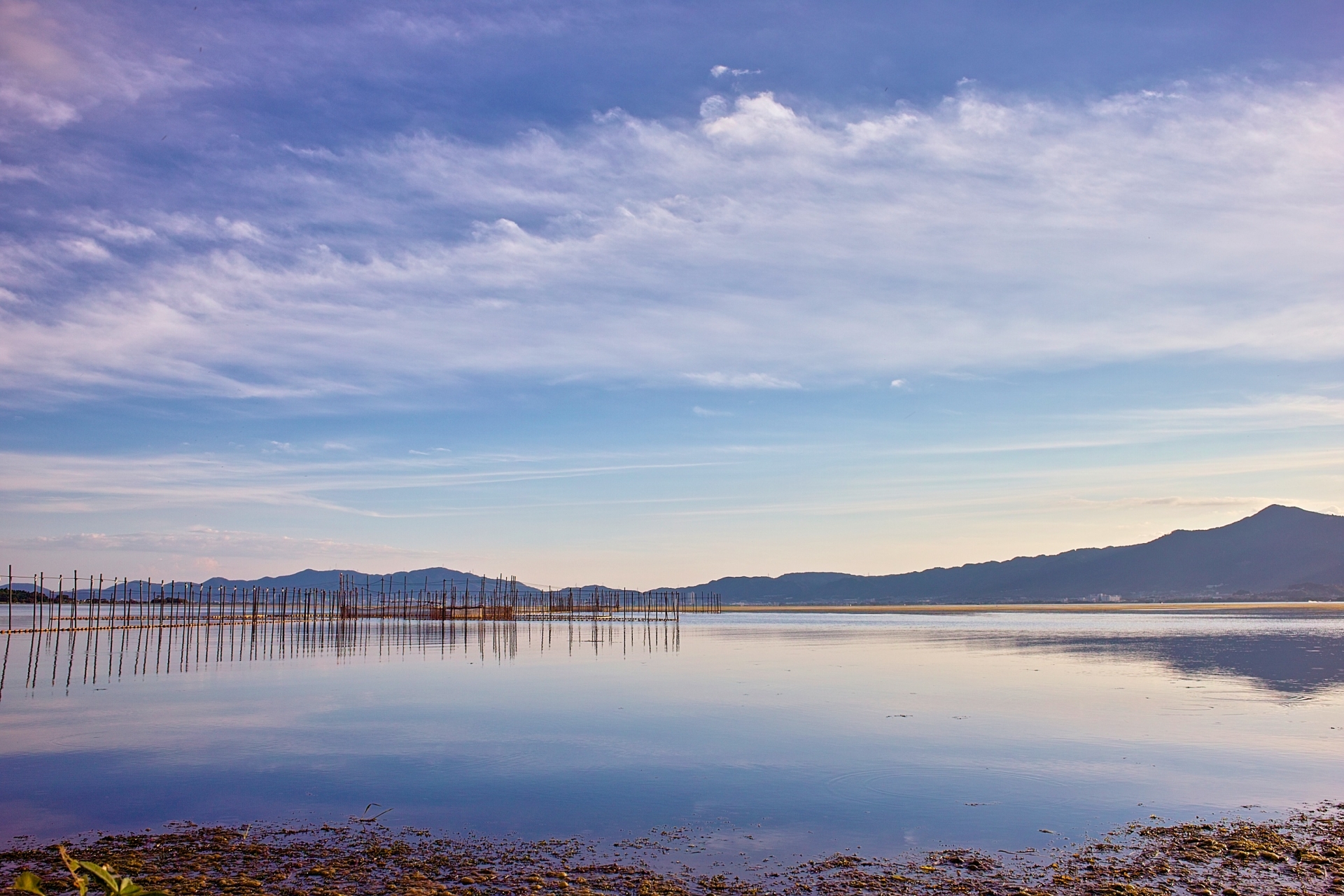 Of course, there are also a number of points of interest around the lake which is so huge that it sometimes looks like a sea. Although the lake is located in Shiga Prefecture, it is easily accessible from Kyoto and Osaka (only 10 minutes from Kyoto to Otsu the capital of Shiga and also the main port of Lake Biwa), perfect for anyone looking to escape the hustle and bustle of these big cities. The following are some of the top attractions in Lake Biwa. 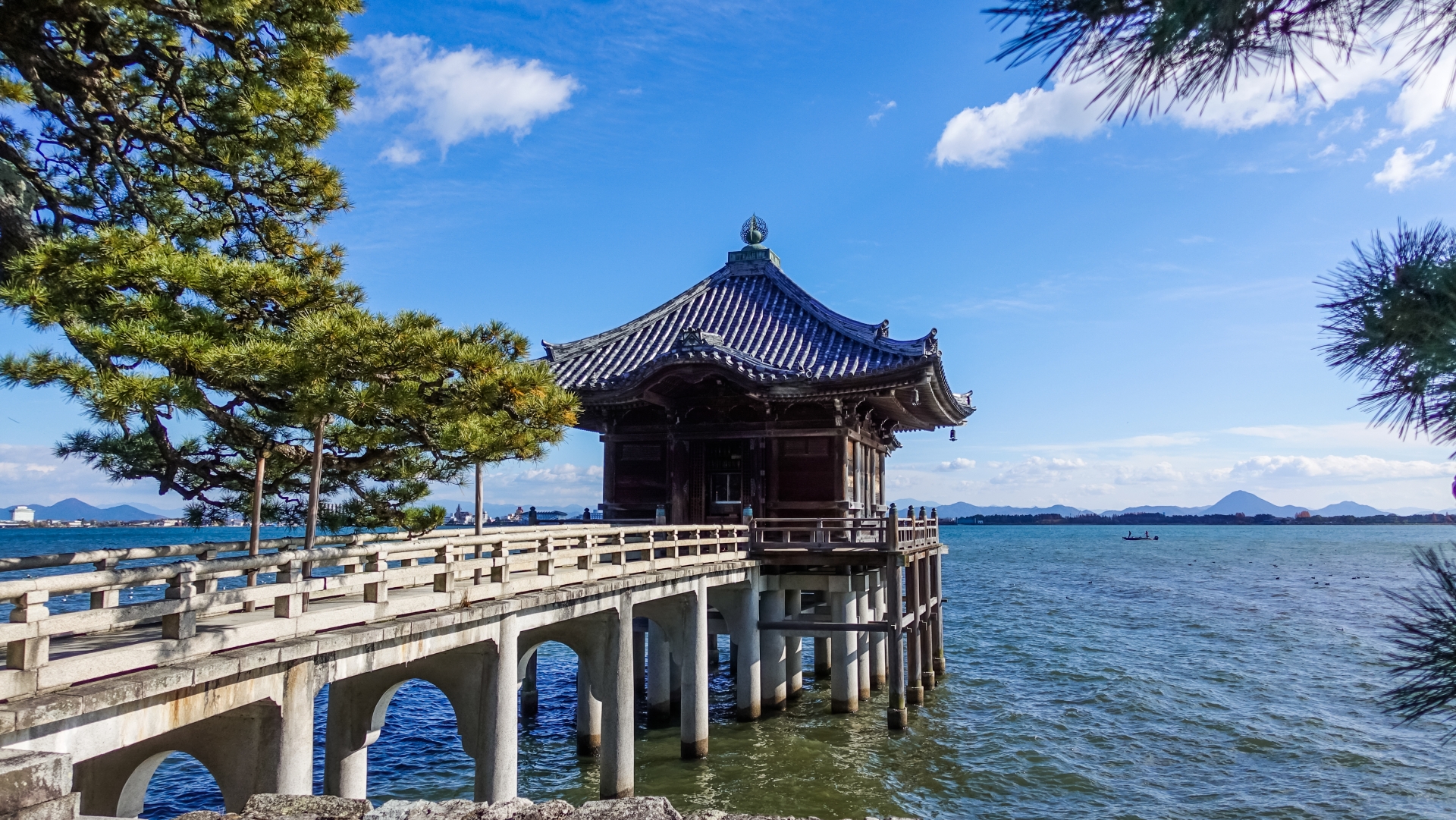 One of the signature sights of Lake Biwa, the hall was originally built in the Heian period (794 – 1185) by Monk Genshin to house the 1,000 Buddha statues he carved to pray for safety on the lake as well as salvation of the masses.

Although the current structure is a replica built in 1937 (the original was damaged by a typhoon in 1934), it is no less interesting as visitors can still see the statues enshrined inside the hall, in addition to the amazing views that make it a subject of poems and paintings over the centuries. If you have the time, you can also go to different vantage points nearby to appreciate the scenery from multiple angles. 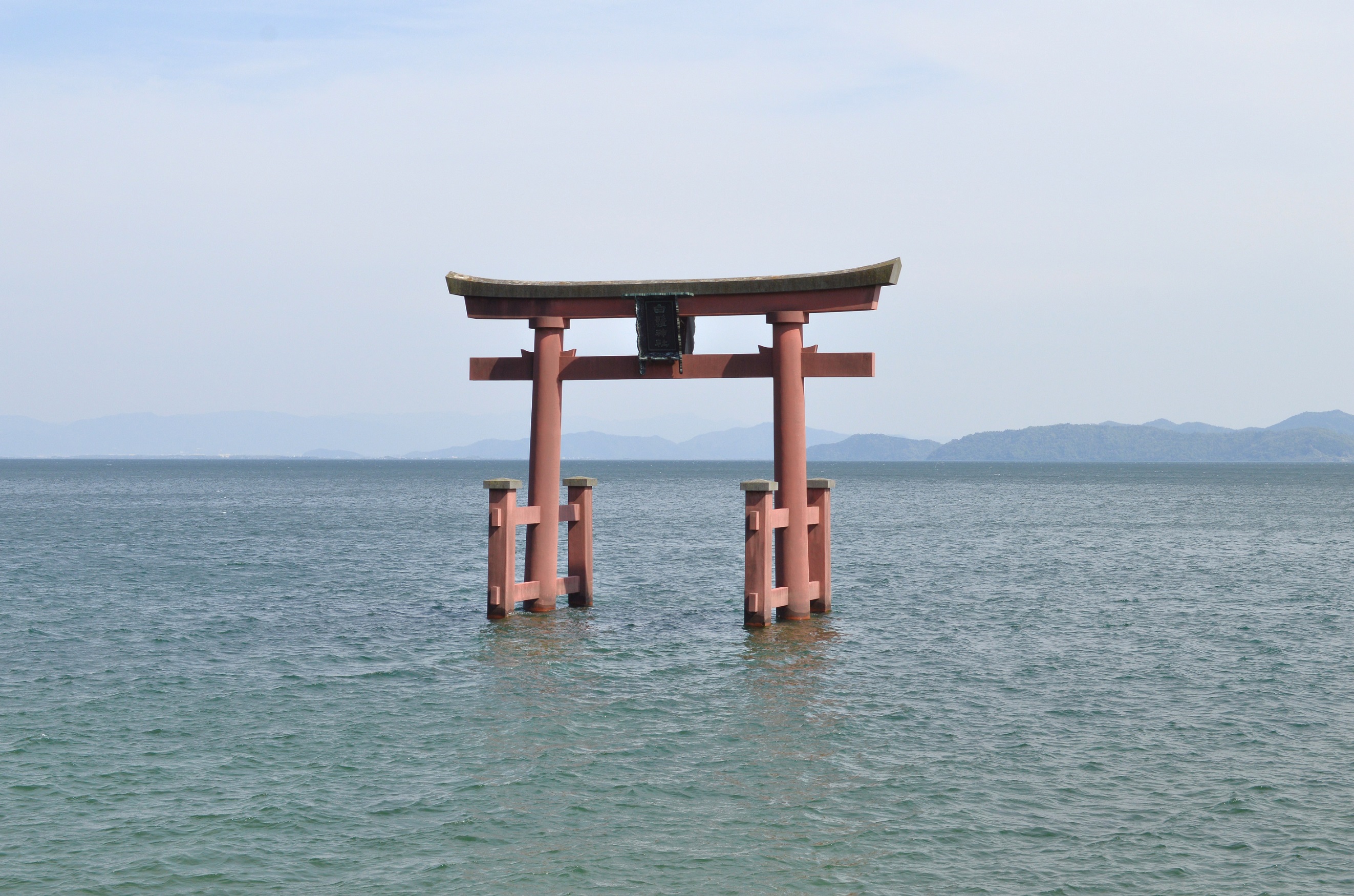 Make no mistake, this is not the world famous Itsukushima (popularly known as Miyajima) but the torii gate of Shirahige Shrine which is the oldest shrine in Omi. The history of the shrine is shrouded in mystery, though legend has it that it was founded more than 2,000 years ago.

The symbol of the shrine is no doubt the torii gate which looks as if it is floating on the lake. Although it is much smaller than its counterpart in Miyajima, it sets against the beautiful backdrop of Lake Biwa and Okishima hence creating a surreal yet peaceful view. The ancient shrine is also home to a number of treasures including the main hall which is designated as national important cultural property, so make sure to check them out while you are here. 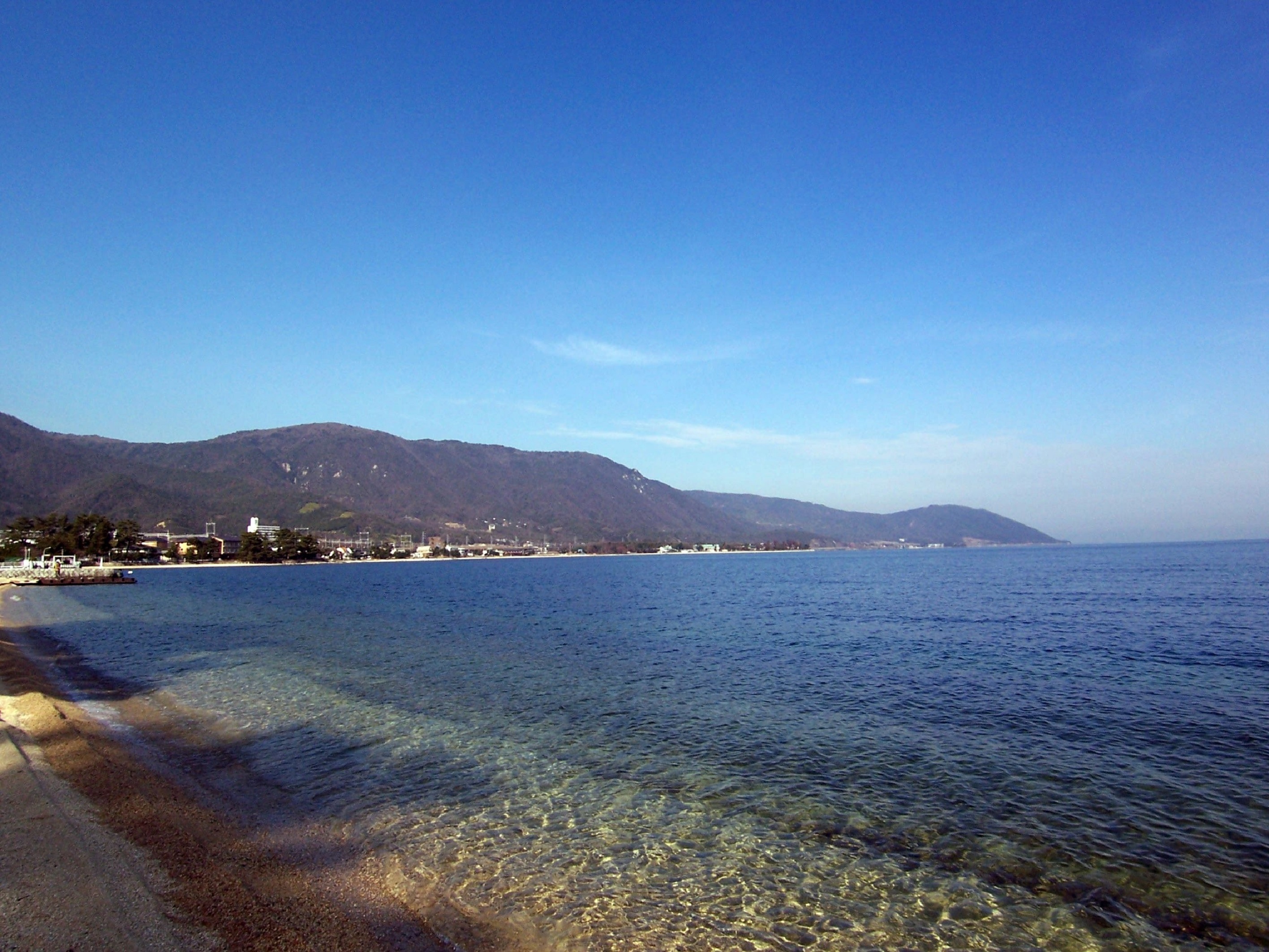 Think a lake can’t be like a beach? Come to Omi Maiko Beach and see Lake Biwa can also appear to be a sandy beach with clear blue water (and shady pine grove too). Apparently, summer is the best time to visit the beach – you can enjoy picnic, water sports, barbeque or even just a relaxing stroll while taking in the views. The beach is also the venue for summer fireworks show “Otsu Shiga Hanabi Taikai” 大津志賀花火大会.

Compared to some other famous beaches, Omi Maiko is not too crowded and touristy so you can have an enjoyable time here. But note that most of the shops and eateries here open only during holiday season (peak season), so bring your own food if you go in the off season. 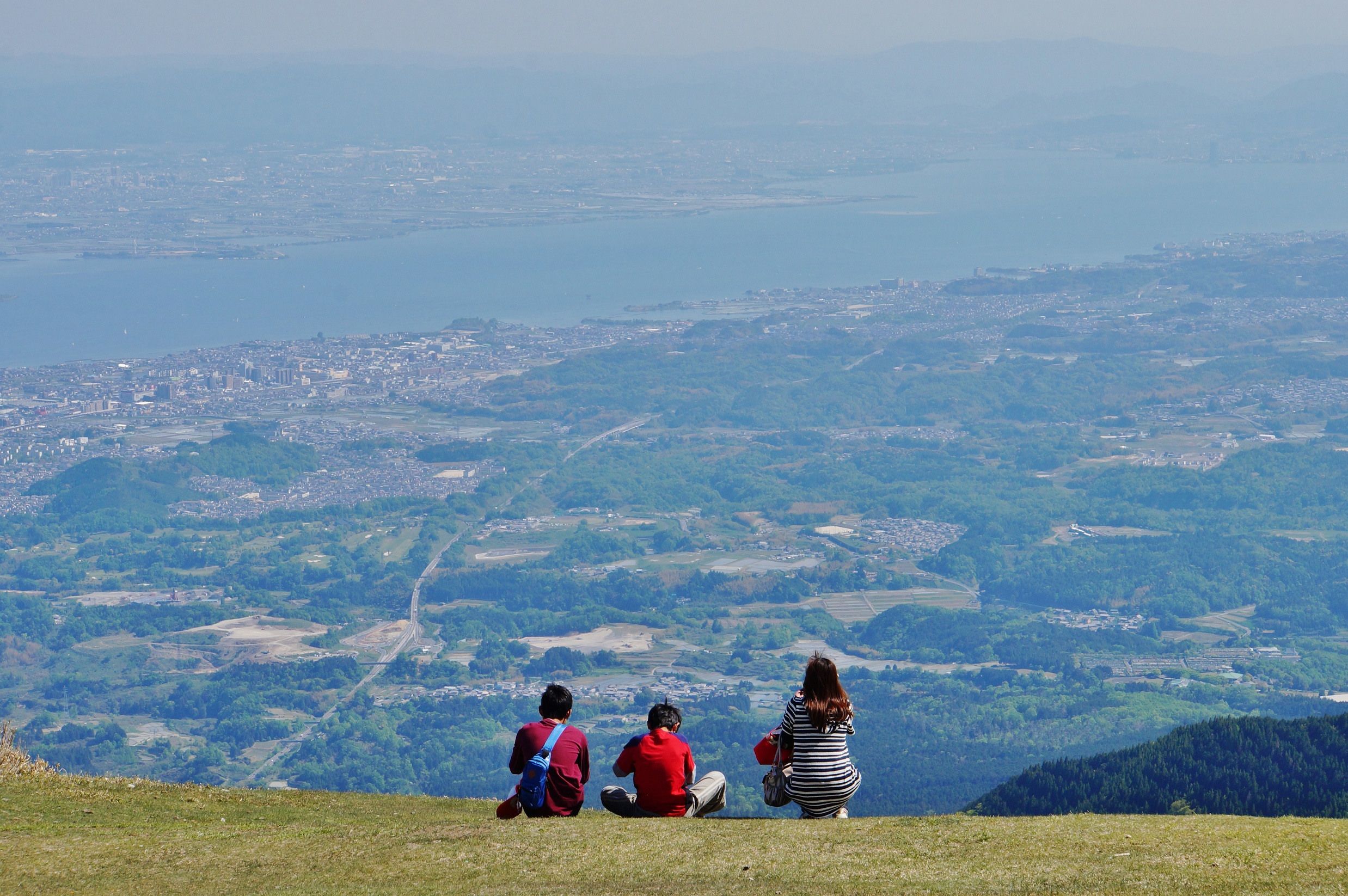 A mountaintop facility where you can relax and enjoy a variety of activities over the vista of Lake Biwa. At an altitude of 1,100 metres, visitors can enjoy four seasons in their glory here – cool and breezy in summer, full of powdery snow in winter, besides bring covered with colourful foliage in autumn and daffodil flowers in spring.

Accessible by ropeway, it features different attractions throughout the year, from Sky Walker and Zip Line Adventure during the green season, to skiing and snowboarding during the snow season. There are kids play areas, viewing platform with panoramic views of the lake and valley below, as well as cafes and restaurants serving meals prepared with local ingredients. 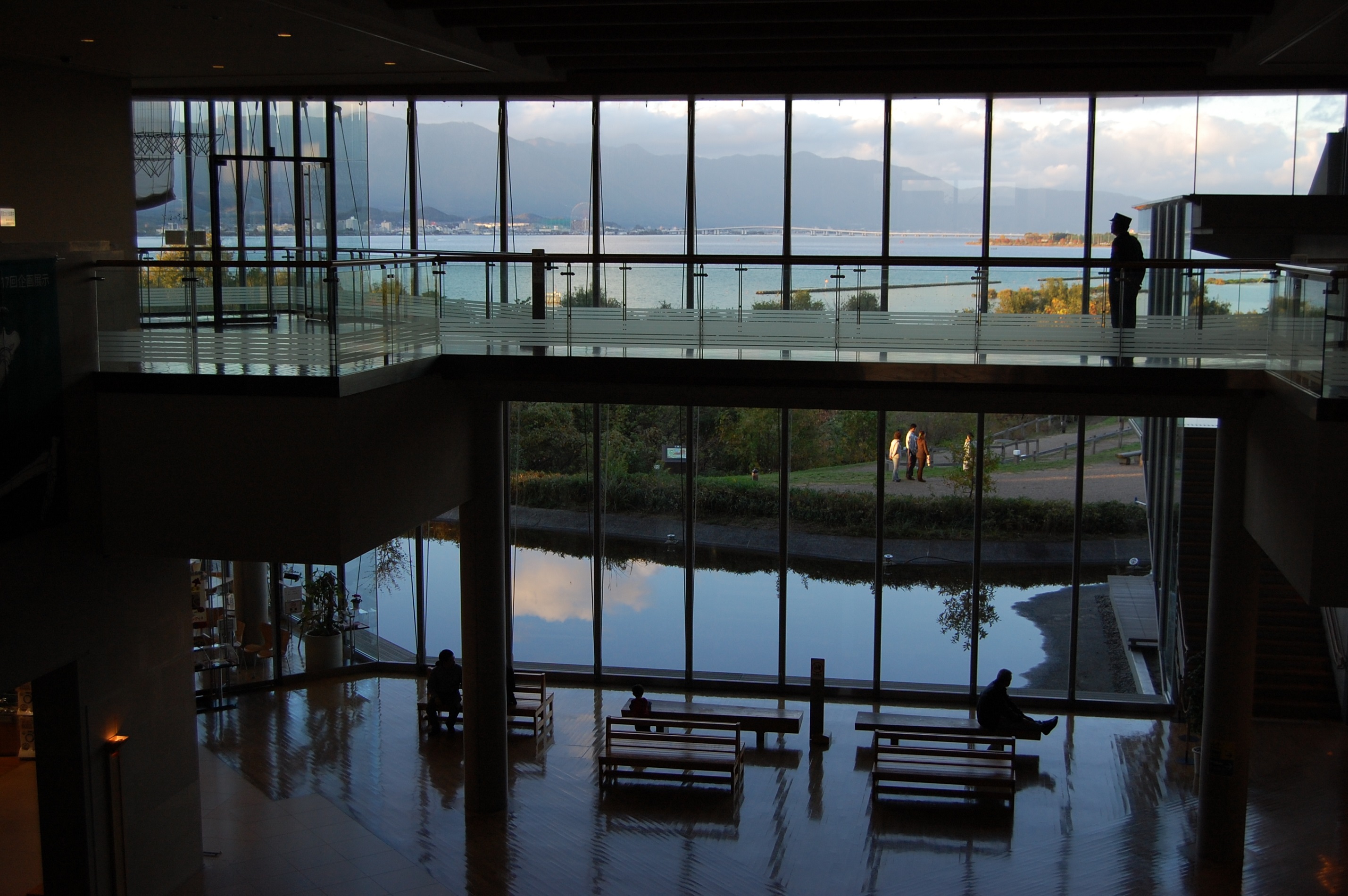 This lakeside museum is great not just for rainy days but also for family with kids as well as individuals who are interested to spend a fun-filled day learning about Lake Biwa. See, touch, and experience your way through the museum’s eye-catching and informative exhibits, including those about its formation, evolution, wildlife, relationship with humans and so on.

Among the facilities at the museum are, one of Japan’s largest aquariums which displays many of the creatures living in the lake, Discovery Room which offers numerous hands-on activities for children, and outdoor exhibits that showcase ancient forest plants found around the lake. There are also a variety of events and activities held at the museum from time to time. 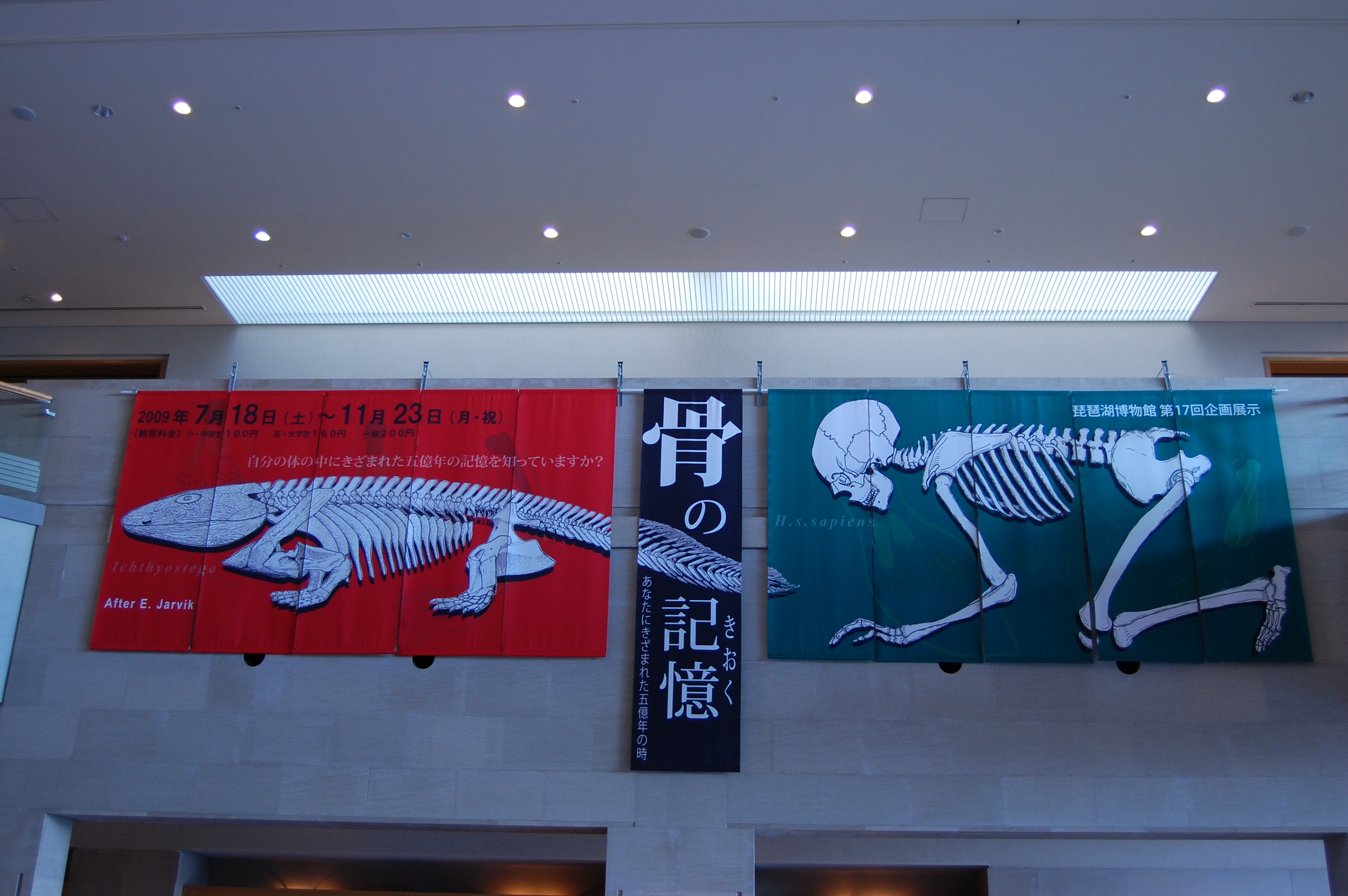 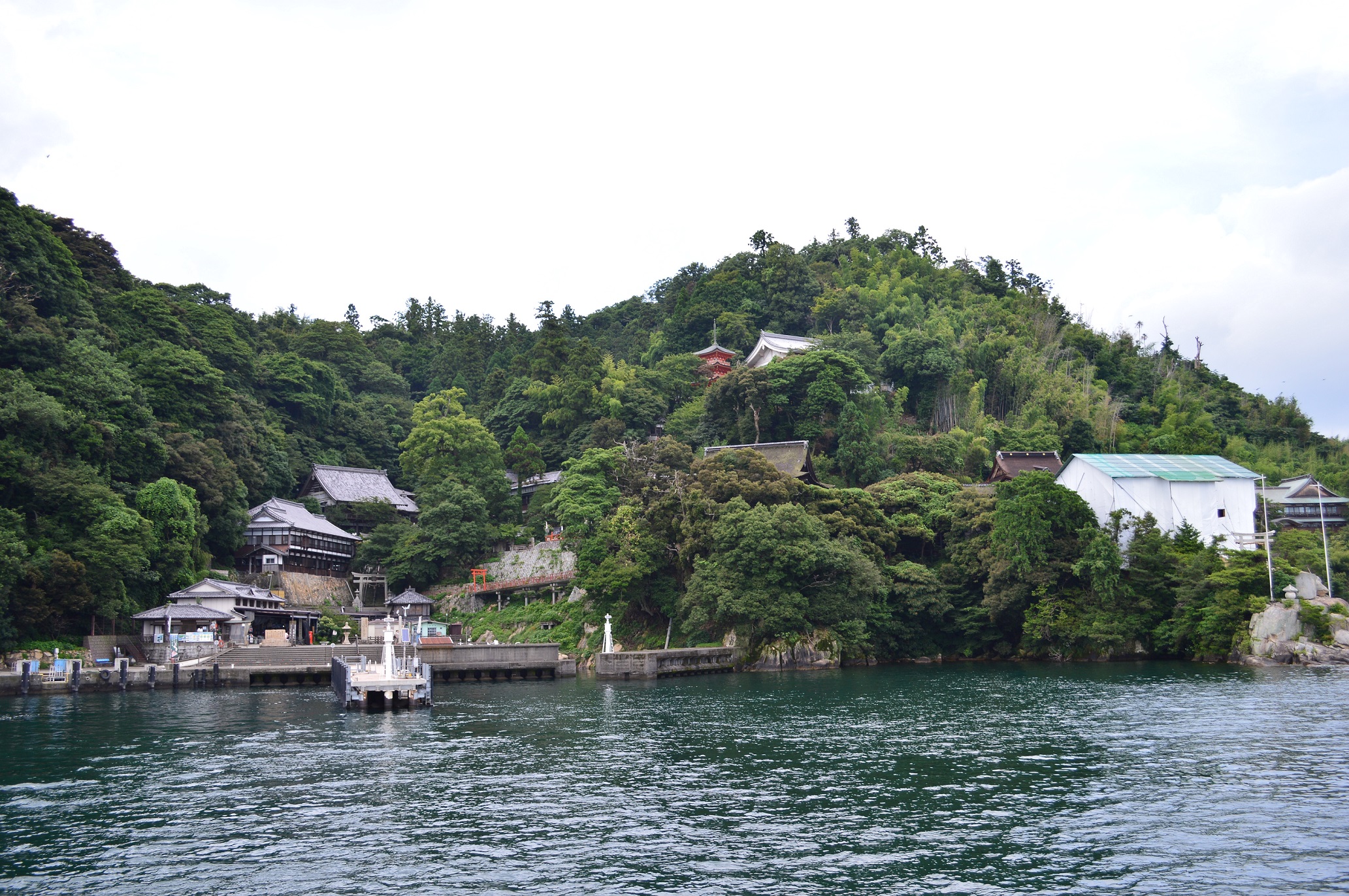 A famous power spot in the Lake Biwa area, Chikubushima has been revered as the Island of Gods since ancient times. People have been visiting the sacred place for over 1,000 years, believing the spiritual energy on the island may grant their wishes.

The island’s points of interests are concentrating in the southern part, where Tsukubusuma-jinja and Hogon-ji, said to date from 5th century and 8th century respectively, are to be found. Both the main building of Tsukubusuma-jinja and the Karamon Gate of Hogon-ji’s are national treasures. One can really feel the history from the old structures and relics of these places. 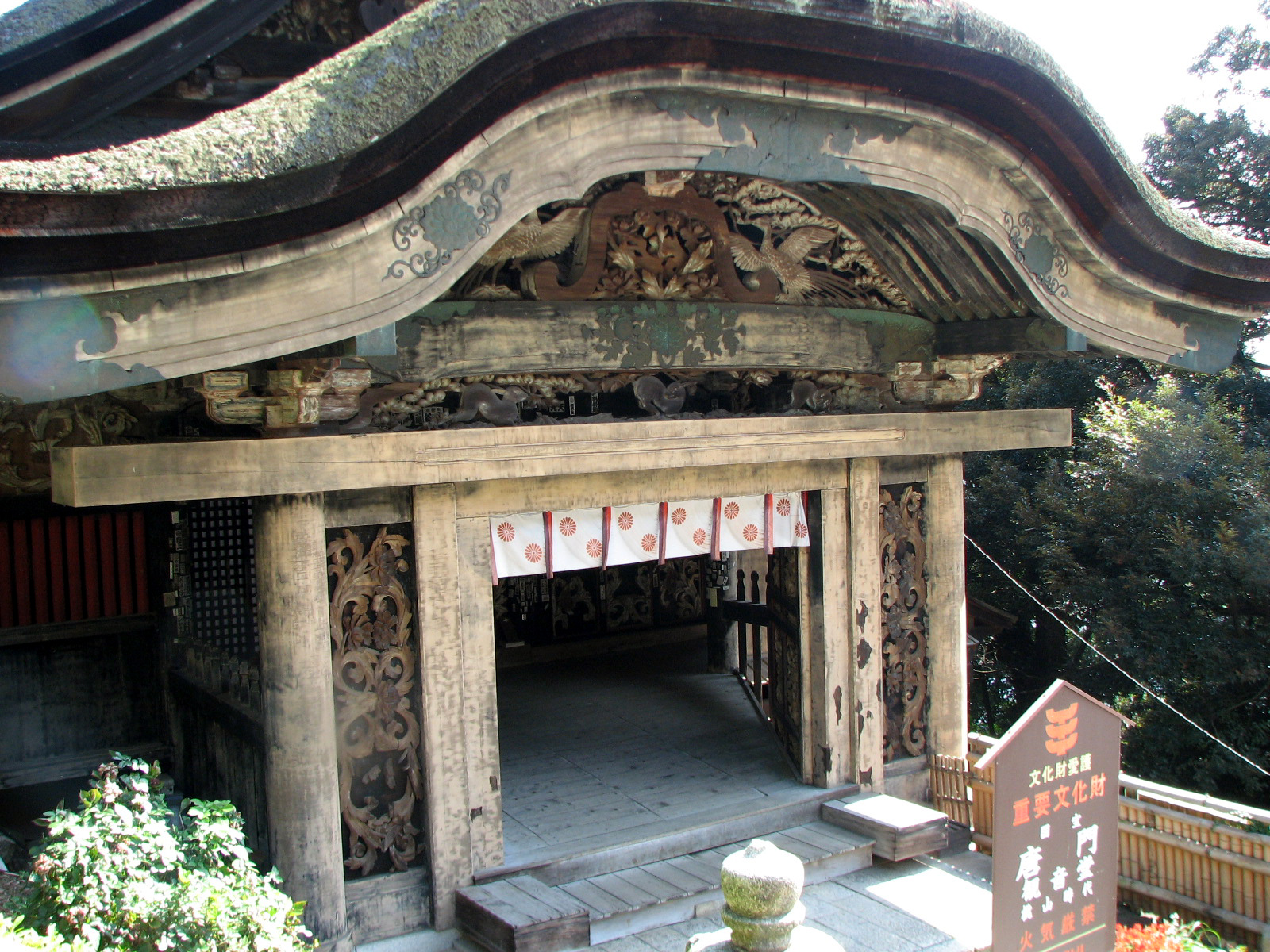 But do note that walking up to these attractions is no easy task – the stairs are a lot and they are steep (not for those with bad knees!). Also make sure to check the weather before going to ensure a pleasant trip on the island.

Access: By one of the sightseeing boats operated by Biwako Kisen (departing from Nagahama and Imazu ports) or Omi Marine (departing from Hikone port). The journey takes between 25 to 40 minutes, fares start from 2,590 yen round trip.