Kakigori Shaved Ice: 10 Must-try Shops in Japan No ratings yet. 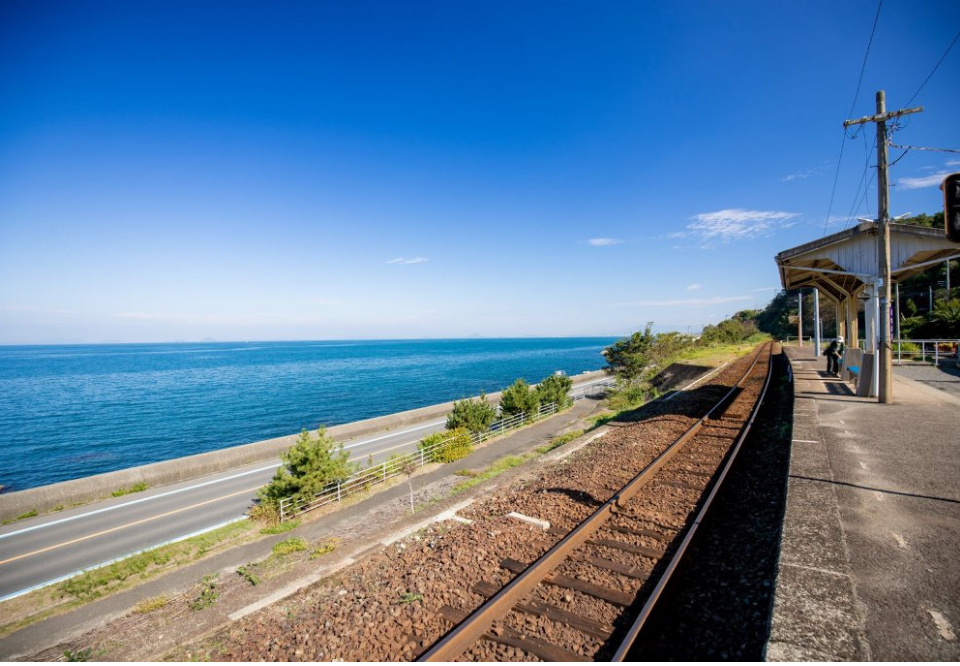 If you don’t know where Ehime is, it is one of the four major prefectures of the Shikoku region. Ehime is the home to Matsuyama Castle and Uwajima Castle, two of the twelve original construction castles in Japan. Besides that, Setouchi Shimanami Kaido is a 60 kilometres expressway that offers the best cycling route from Ehime to Hiroshima. There are 11 cities inside Ehime and its capital city is Matsuyama.

Aside from these high-rated places, let’s explore other attractions in Ehime in case you plan to visit Shikoku in the near future. 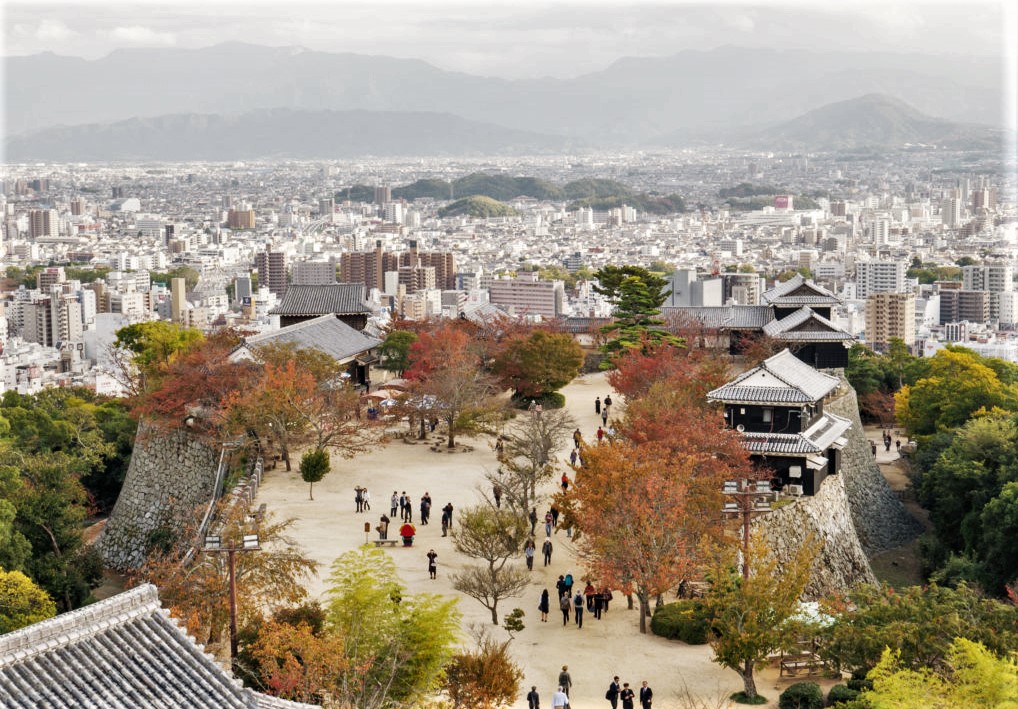 Stunning view from the top of Matsuyama Castle. Image Source: Notes of Nomads.

Known as the oldest hot spring resort in Japan, this onsen is situated in the city of Matsuyama. If you think this building looks somewhat familiar, maybe this will jog your memory. Dogo Onsen served as an inspiration for a famous animated film, Spirited Away by Hayao Miyazaki under Studio Ghibli. In the film, the onsen is named as The Bathhouse or Aburaya.

In total, there are four onsens disaggregated according to men and women on the first and second floor of Dogo Onsen. The first floor is known as Kami-no-Yu (Bath of the Gods), while the second floor is called Tama-no-Yu (Bath of the Spirits). The good thing about this onsen is that they do not imply any restrictions towards tattooed people. This means that Dogo Onsen is a tattoo-friendly onsen. 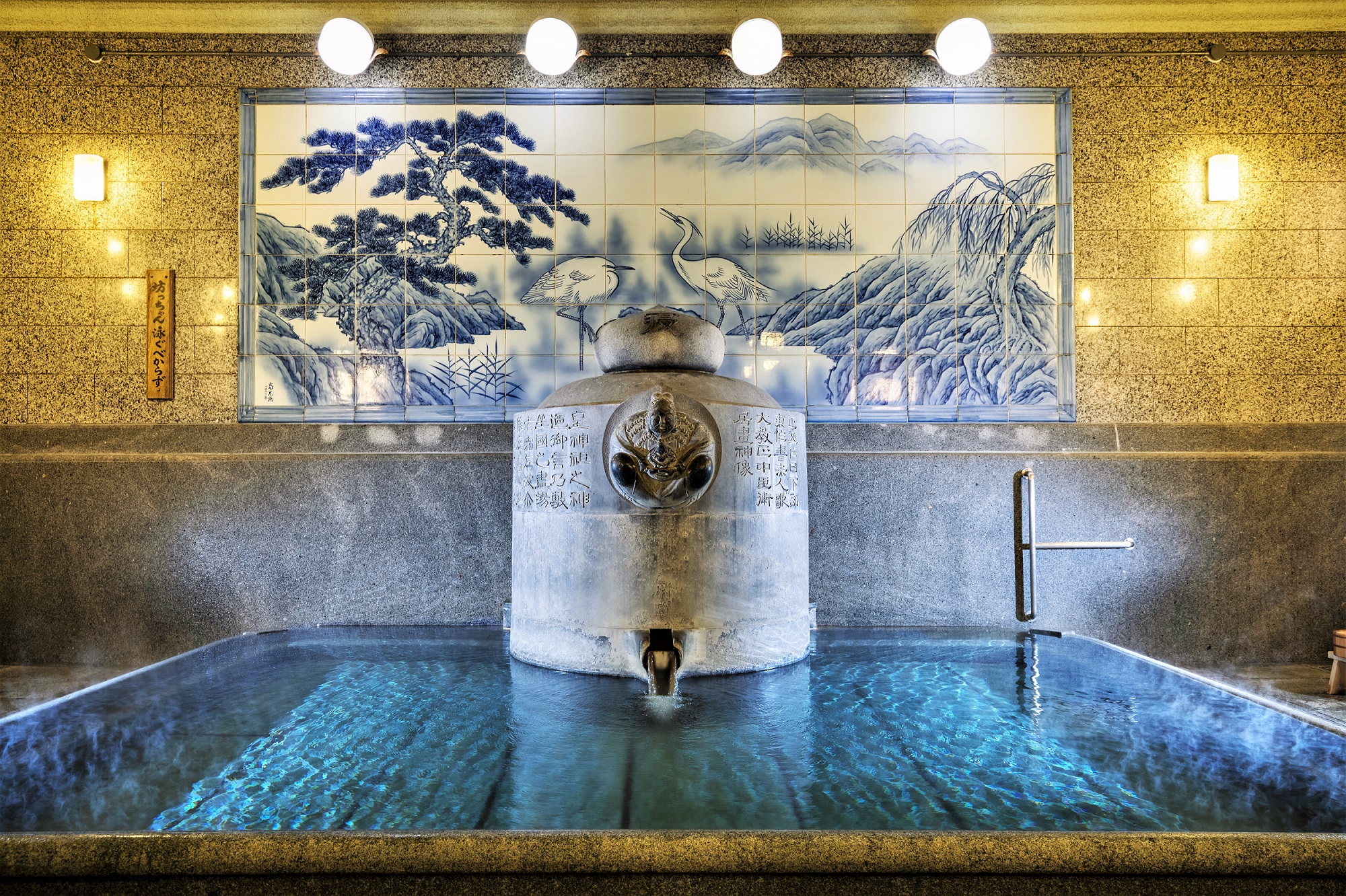 Nicknamed as ‘The Machu Picchu of the Orient’, Minetopia Besshi is an old mining site nestled in a quiet hilltop of Niihama. 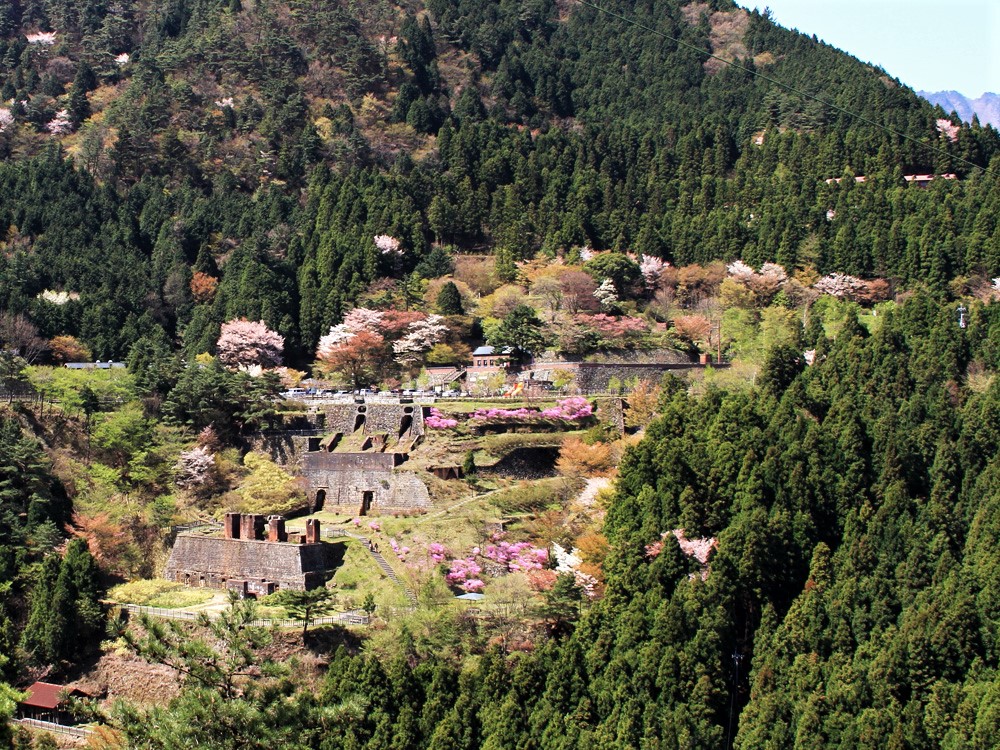 This place is also known as Tonaru Zone. It was a lively place during the early 1900s and there were approximately 5,000 residents and the majority of them are miners’ workers. As years passed by, the mining site was permanently shut down and was named as an Industrial Heritage.

What is left on the site were rail tunnels and other remnants. You can visit this place by taking a 2-hour sightseeing bus tour from the main park, just below the Tonaru Zone. If you are interested to know the history of this place, head to Tonaru Historical Museum or join a workshop to make personalize copper plate relief at Tonaru Mine Koubou. The fee for the workshop costs ¥525.

One of the old tunnels in Tonaru Zone. 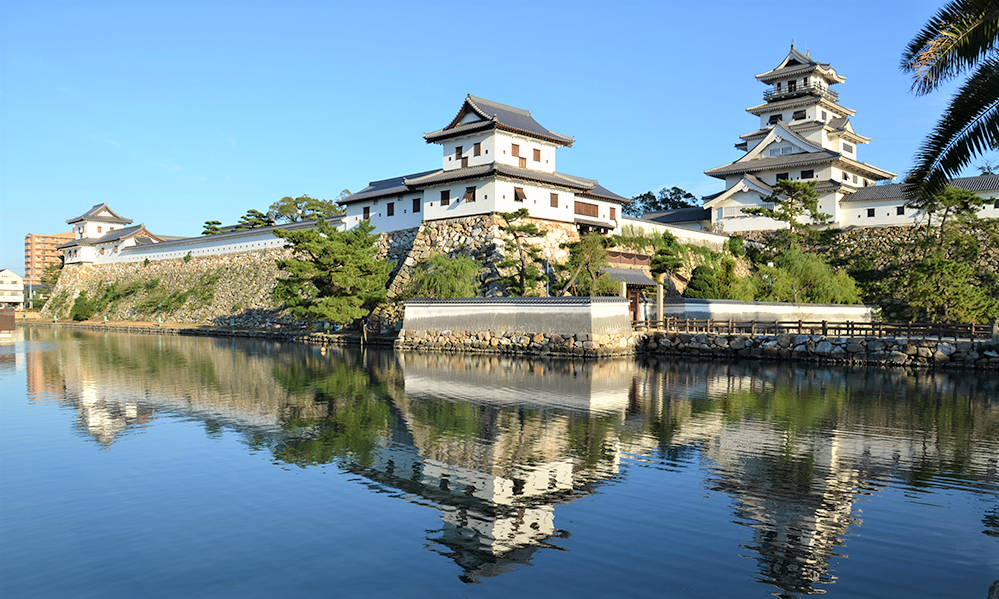 Facing the Seto Inland Sea, Imabari Castle is listed in one of Japan’s great three water castles. This structure was erected by a well-known castle builder in Japan, named Todo Takatora in the 1600s. He specifically built Imabari Castle for himself.

Inside the castle ground, you will find a tall statue of Todo Takatora posed on a horse. Furthermore, there is a museum that displays many samurai armours, swords, calligraphy as well as its history. It is common for any castles in Japan to have its own shrine. Imabari Castle is no exception to this. Situated next to the castle is Fukiage Shrine.

Aside from all that, every evening, the castle will be illuminated in a dim orange light which makes the castle seems more fascinating. 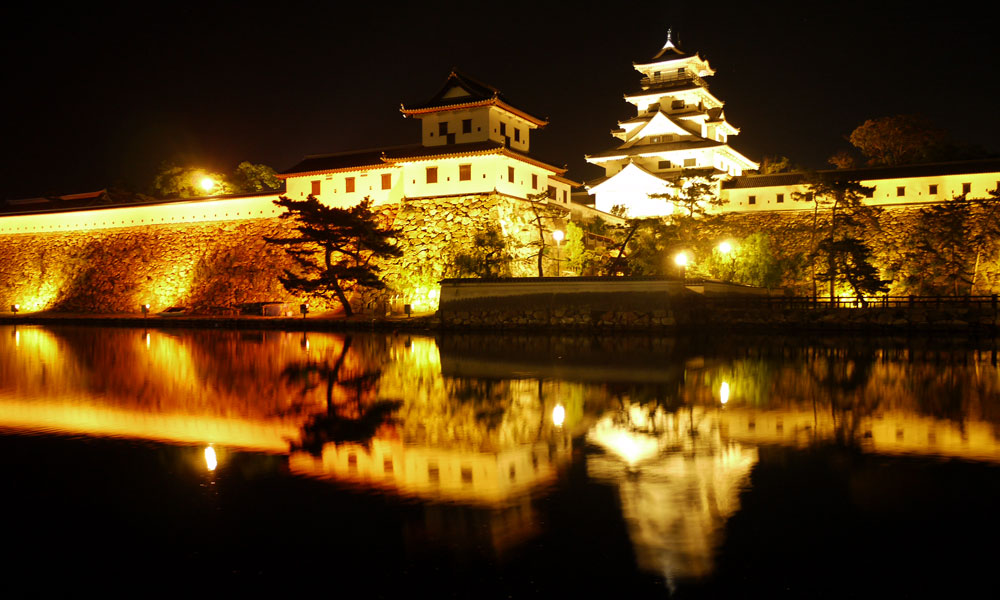 If you love flowers, you will love this place! Situated in a small city of Shikokuchuo, Suiha Kogen will not only feast your eyes with a myriad of flowers but, you will also get a chance to catch a glimpse of Mount Ishizuchi from the field. 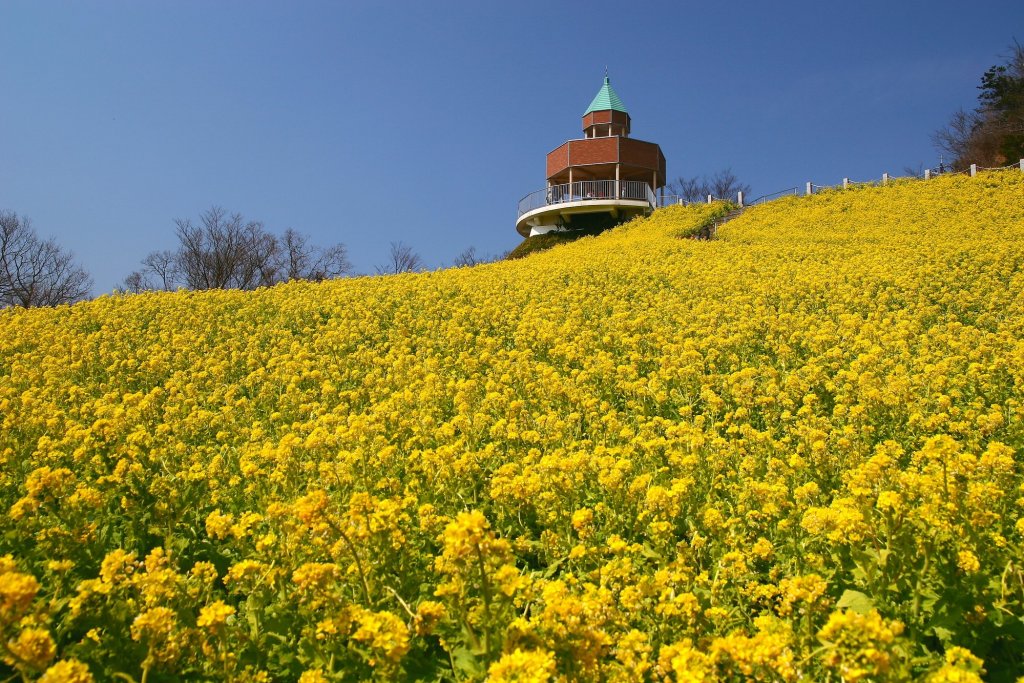 There are over 20,000 thousands rapeseed flowers planted along the gently undulating hills aside the narrow walkway. The view from the top is definitely a sight not to miss as you can also climb the observation deck to see a beautiful panoramic landscape of the field.

The best time to see rapeseed flowers blooming wildly is from April to May. Meanwhile, cosmos flowers will emerge during summer to autumn. 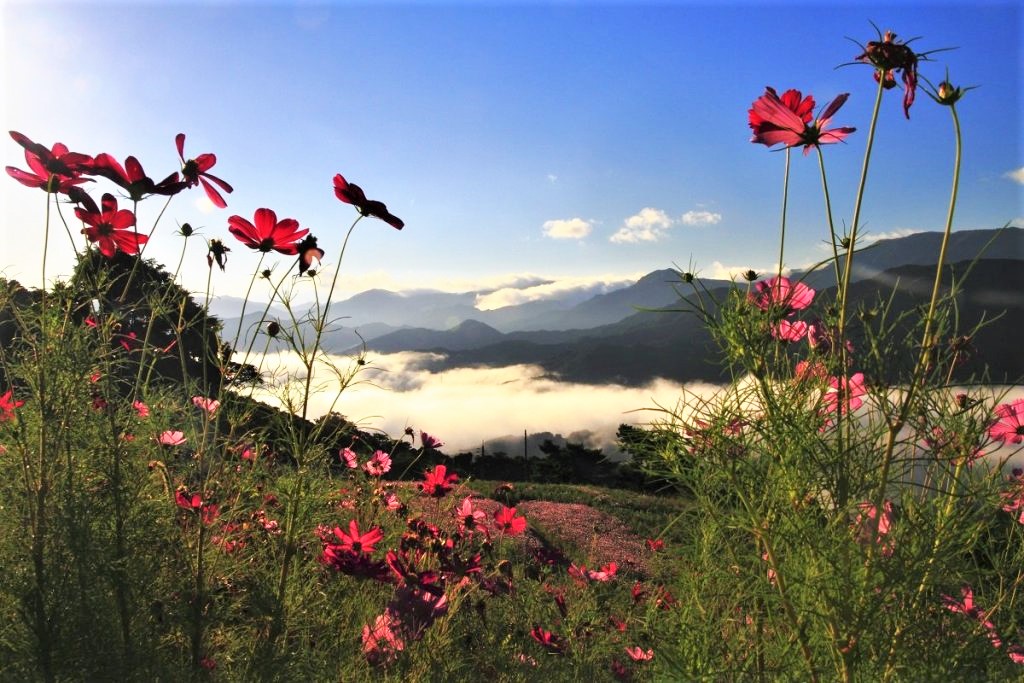 The notoriously famous cat island in Japan, Aoshima Island houses more than hundreds of cats. In total, there are only 15 residents here and they are all retirees as well as fishermen. The cats outnumbered humans by 8:1. Hence, don’t be surprised to see many cats swarming at your feet when you arrive at the island. 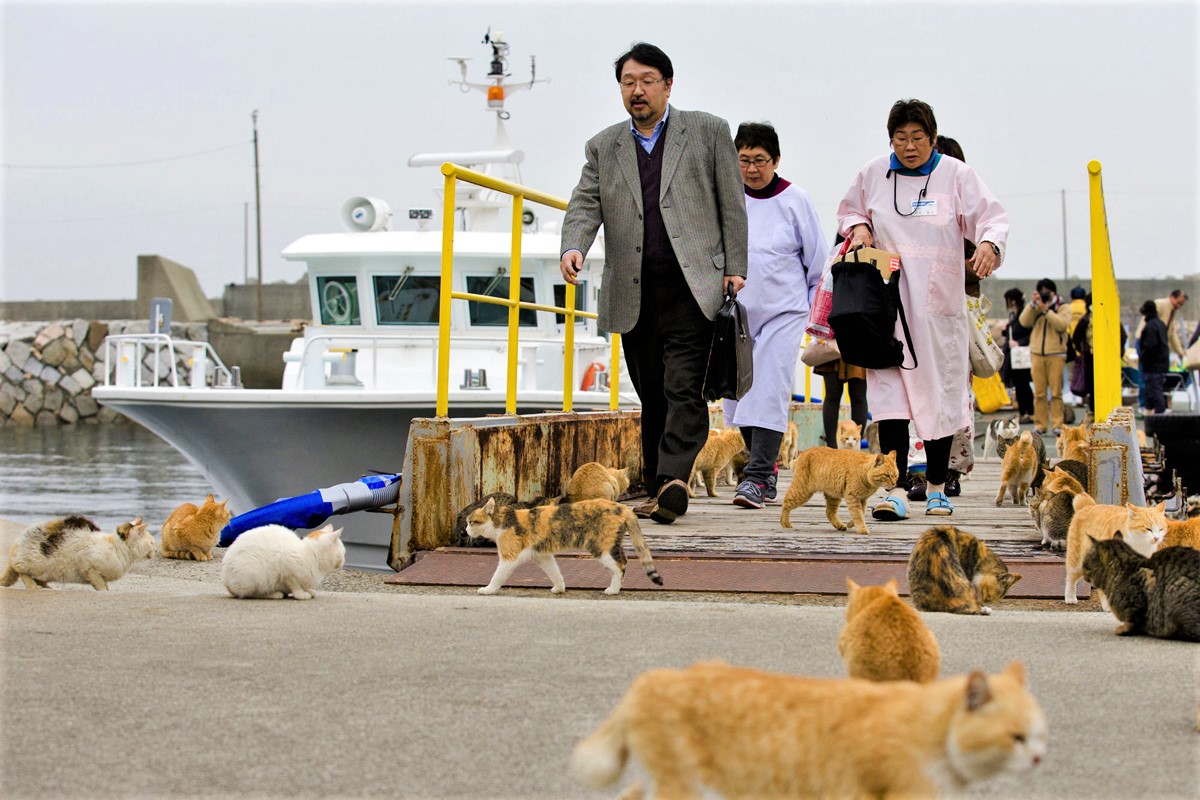 Aoshima Island was a ghost town as the island was uninhabited for so many years until World War II. The highest recorded number of the human population was 655 in 1960. Then, people fled off the island to look for jobs and a better lifestyle.

Bear in mind that this island doesn’t have any amenities such as hotels, inns, restaurants and even a vending machine. Visiting Aoshima Island is perfect for only a day trip as there isn’t much to do around here except meeting with the overly populated cats.

Additionally, you can bring cat food to feed the cats but make sure you don’t overfeed them. If you have leftovers, please store the food in the designated area. 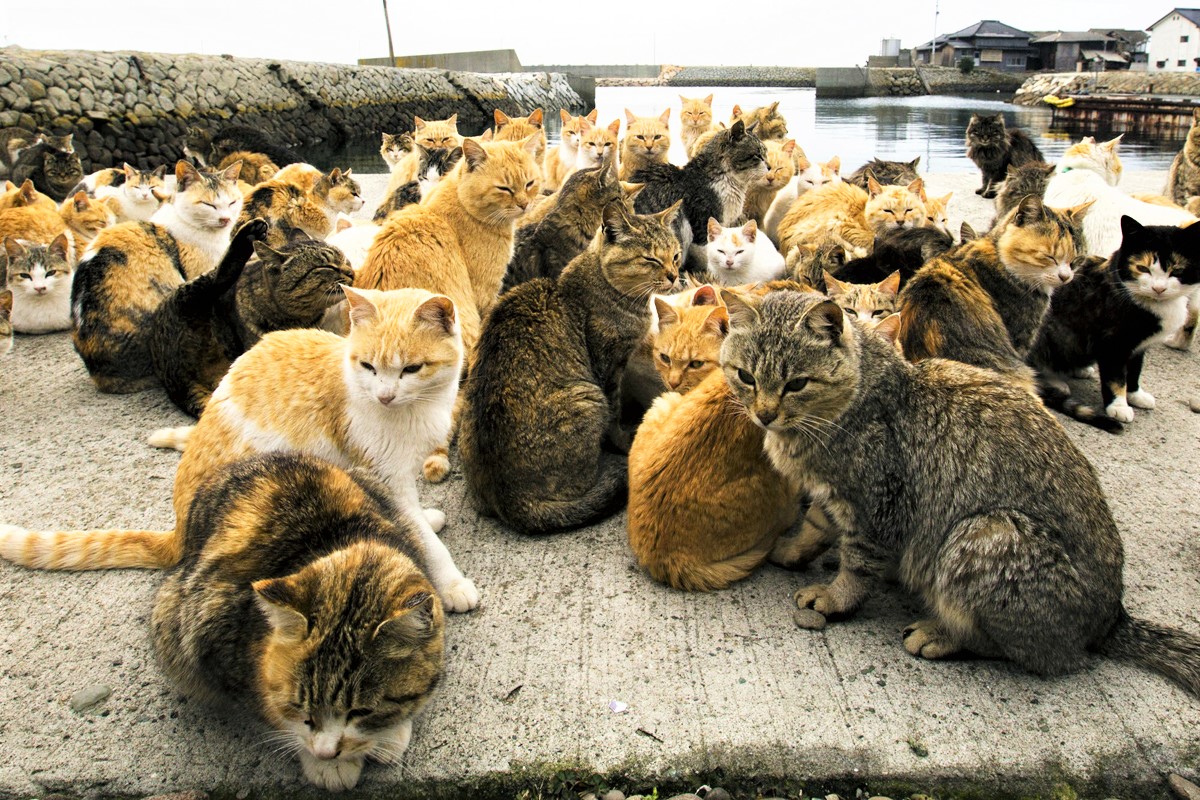 You can reach the island by hopping on a boat from Nagahama Port. The port is just a few minutes of walking from JR Iyo-Nagahama Station.