Celebrate Summer with a Bang at Sumida River Fireworks Festival

Japan Expo 2018 is back in Malaysia! No ratings yet.

Kimono Rental: A unique Japanese experience No ratings yet. 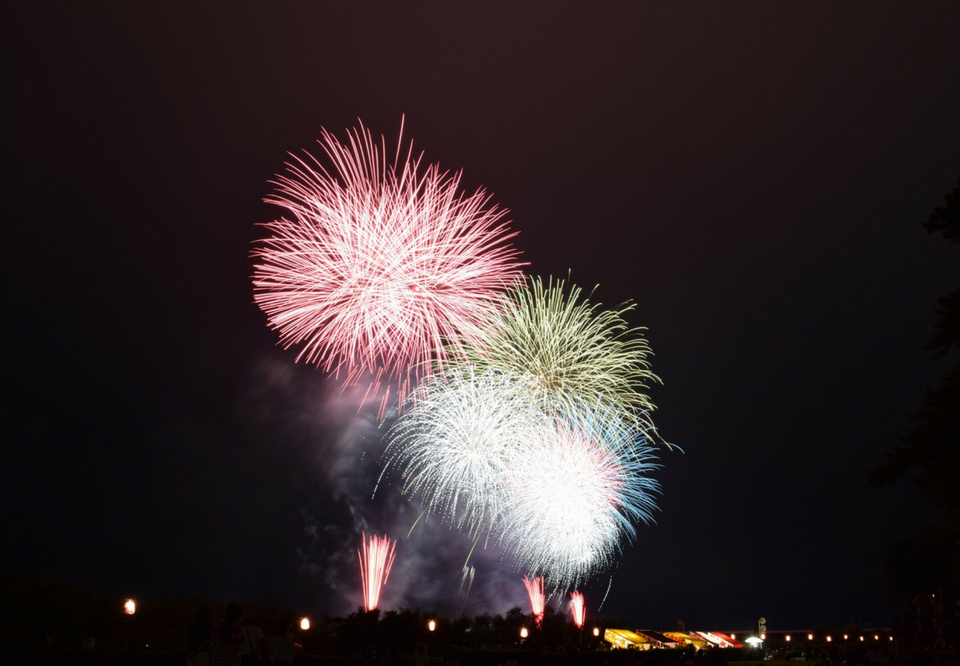 Fireworks festivals are one of the most delightful summer scenes of Japan. In Tokyo alone, the hottest months of July and August see not less than a dozen of fireworks festivals competing to please the eyes of the spectators each year, with the famous ones include the fireworks of Edogawa, Katsuhika, Sumidagawa, and Tamagawa.

This article will focus on Sumidagawa Fireworks Festival – the oldest and largest display in Tokyo. Read on to learn more about this spectacular event and some of the locations to catch the best view! 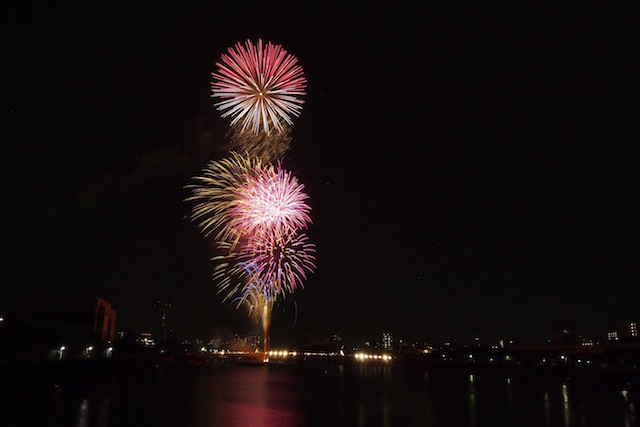 Sumidagawa Fireworks Festival, or known locally as Sumidagawa Hanabi Taikai 隅田川花火大会, is an annual firework event taking place on the banks of the Sumida River on the last Saturday of July. Around 20,000 fireworks are set off during the massive display, lighting up the summer night sky of Tokyo with awe-inspiring bursts of colours. 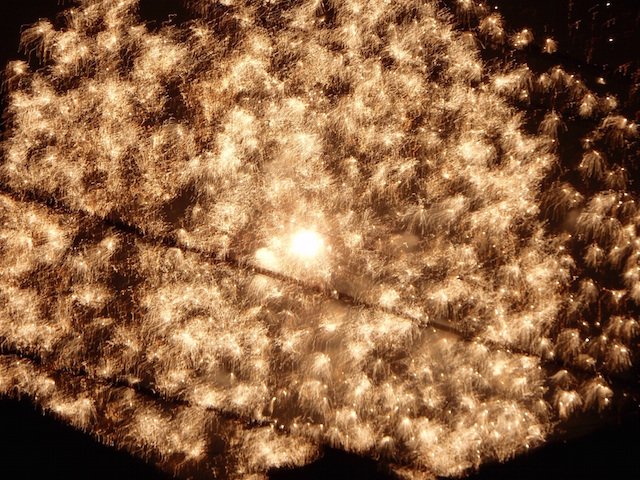 The fireworks of Sumidagawa dates back to 1733 when it was staged as part of the Water God Festival to dispel evil spirits and comfort the souls of those who died in a severe famine and epidemic the year before. Since then, fireworks display became a tradition and held regularly not only as an observance but also as entertainment to improve the mood and spirits of the poverty-stricken masses. 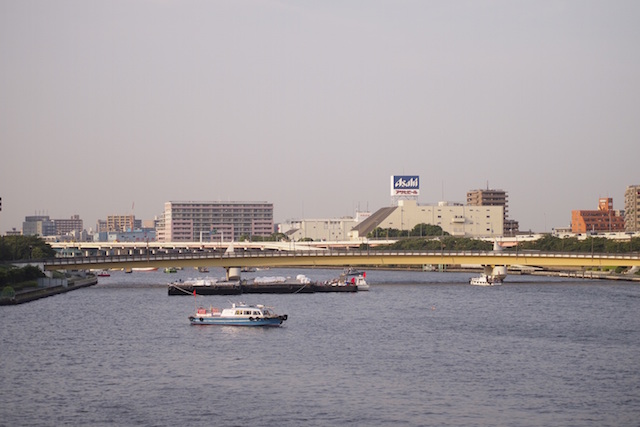 From its early days, the festival was a fierce competition between two firework manufacturers, Tamaya and Kagiya, which strived to outdo each other and win over the crowd’s affection. It explains why the fireworks are sent up from two locations even to this day.

Although the rivalry is a thing of the past now, the pyrotechnists still persistently improve and upgrade their techniques over the years. You might still hear people shout “Tamaya” or “Kagiya” while watching the fireworks! 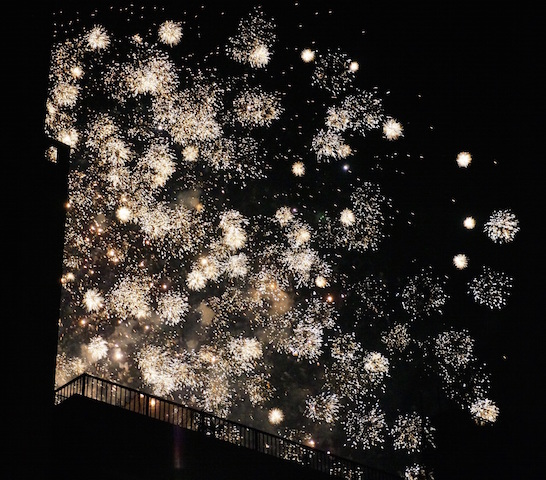 Expect to see some of the most elaborate, cutting-edge hanabi (fireworks in Japanese, means fire flowers) that come in various shapes, sizes, and colours. In addition to big fireworks, there are also smaller starmine fireworks as well as themed fireworks in the shapes of Hello Kitty, Pokemon and so on.

The fireworks can be viewed from a number of locations along the banks of Sumida River. The most popular spots are of course the ones near the launch sites, but the event attracts close to a million spectators each year so you can imagine how crazily crowded it is.

Still, nothing beats the experience of watching the fireworks bloom overhead at close range, together with the sounds and smell of fireworks, as well as the cheers of the crowds. 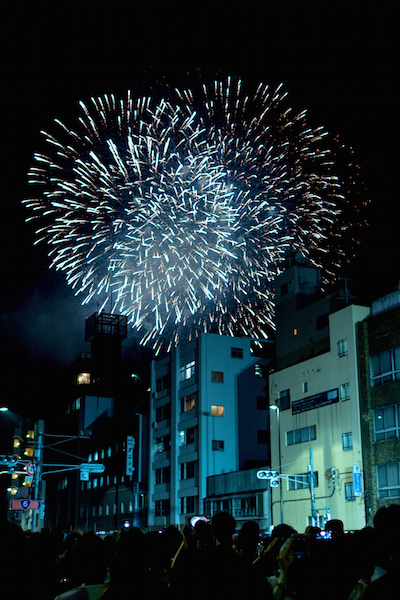 The classic summer festival atmosphere on the ground is just as appealing. You will see many locals attending the festival in yukata (summer kimono), food vendors and game stalls lining the streets, and groups of people sitting around eating, drinking and waiting for the party to begin. 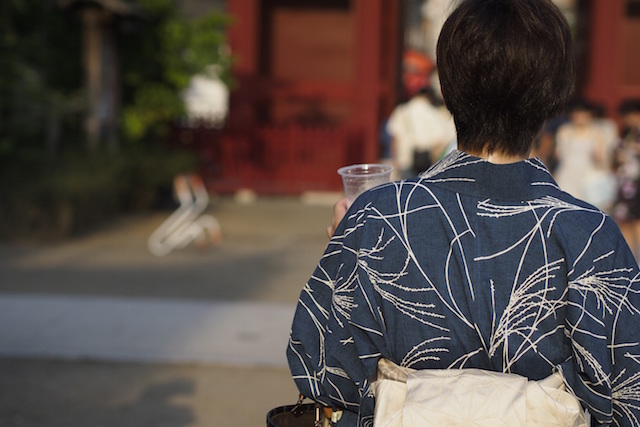 Stretches along both sides of Sumida River with Tokyo Skytree in sight, Sumida Park remains to be the top location to enjoy the show. Although the buildings around may block some of the views, the fireworks shoot high into the sky so you will have no problem seeing them clearly. Competition for a nice viewing spot is fierce here because people even arrive as early as the day before to secure a space for their party. While you don’t really need to go this far, it is still best to come before noon to reserve a place – spread your picnic mat and have at least one person from your party stand on guard duty until the festivity starts. 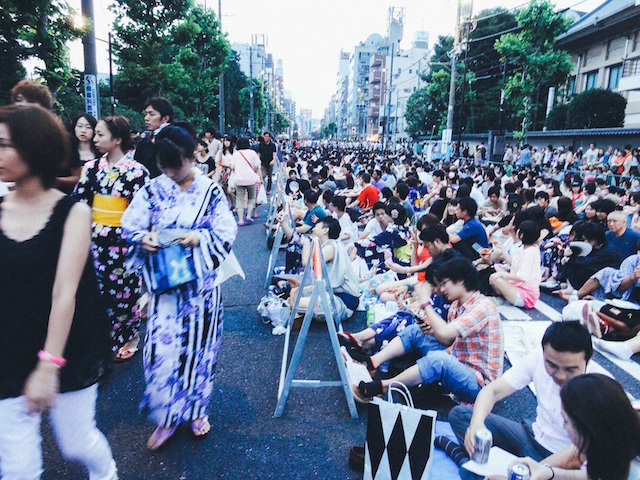 You will also see throngs of people seated along the road and under the highway between the launch sites, which are also highly popular spots to see the action. The roads around the park are closed to traffic on the evening, but people are already here well before waiting to secure a place.

In case you failed to secure a picnic place, fret not because many people simply walk the streets and stop from time to time at different locations to watch the show. 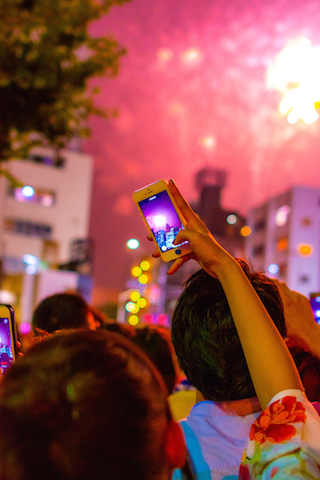 An even better place to catch the fireworks is from the bridges between the launch sites, such as the blue Kototoi Bridge and the vermillion Azuma Bridge, as you get to fully appreciate the beauty of the fireworks from here. 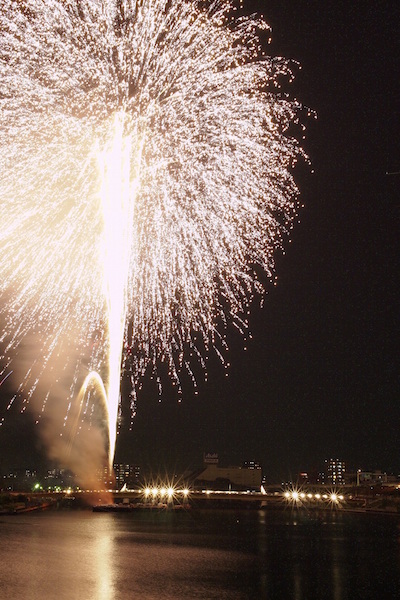 Before that, you will need to wait in line along with many others to walk across the bridge and get a clear view of the fireworks blazing over the river and illuminating the night sky. Please note that no stopping is allowed along these bridges (some walkways as well), so you have to keep walking while viewing the fireworks. 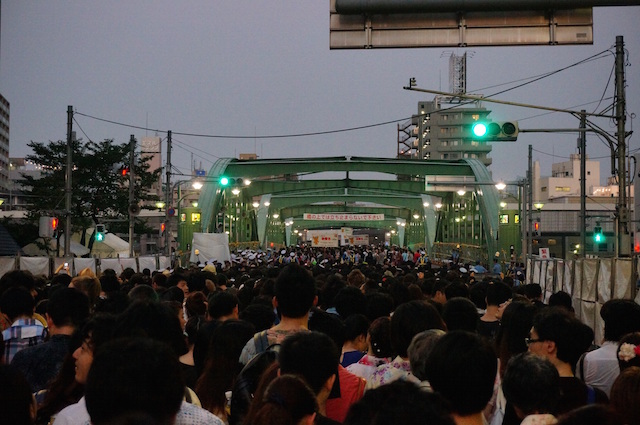 You can even go further and stroll around the vicinity of Asakusa. Given there are not many high buildings in the area, you can actually get a good view of the fireworks (tip: the famous Sensoji Temple is one of the popular viewing spots itself). The festival atmosphere is just as great here as people gather around to watch the display, there are also many yatai food stalls selling all kinds of festival foods.

Other ways to catch the fireworks 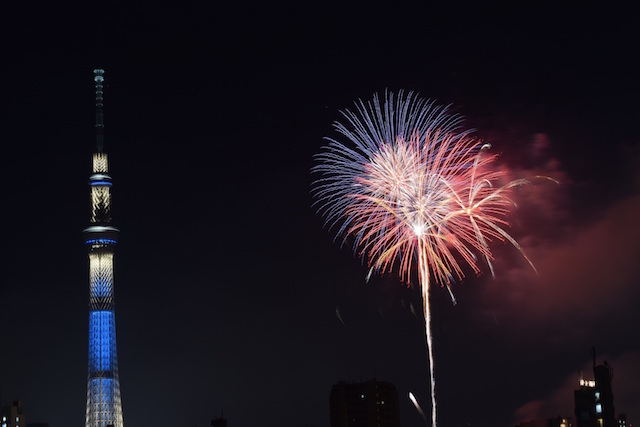 If you prefer a less crowded place, other parks along the Sumida River such as Shioiri Park and Higashi-Shirahige Park also offer a stunning view of the fireworks despite being a little off from the main locations.

You can also watch the show on the river from one of the yakatabune tour boats, or from Tokyo Skytree where you literally look down on the fireworks. Whatever your choice is, be sure to inquire and make a reservation well in advance because they tend to sell out really quickly despite the higher-than-usual ticket prices. 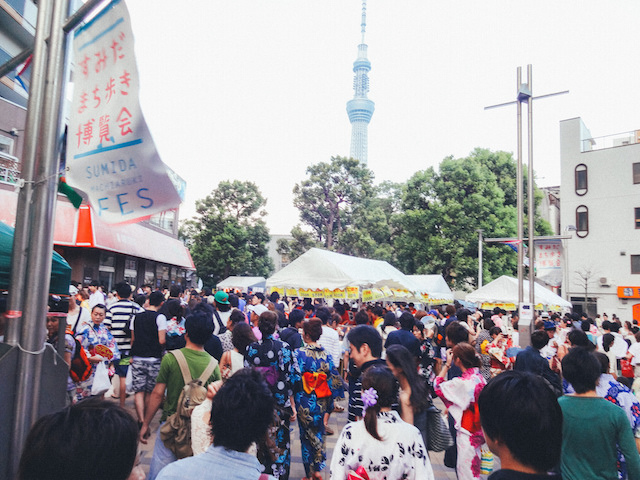 Fireworks festivals are indispensable summer activity in Japan. If you plan to visit the country in summer, be sure to attend at least one event to experience the mind-blowing beauty of the Japanese fire flowers!

To ensure a great time, preparation is the key. Plan well ahead and your night will go off with a bang. When the big day comes, don a yukata and use an uchiwa fan for an authentic summer festival experience!

Note:
The event will take place in case of light rain, but will be postponed to the next day (Sunday) if the weather is poor, and cancelled with no replacement if it cannot be held on both days.