Beaches, Onsen and More: Top Attractions to Visit on the Izu Peninsula (Part 1)

10 Halal Souvenirs to Buy From Japan (Part 2) No ratings yet.

Food Museums to Visit in Japan No ratings yet. 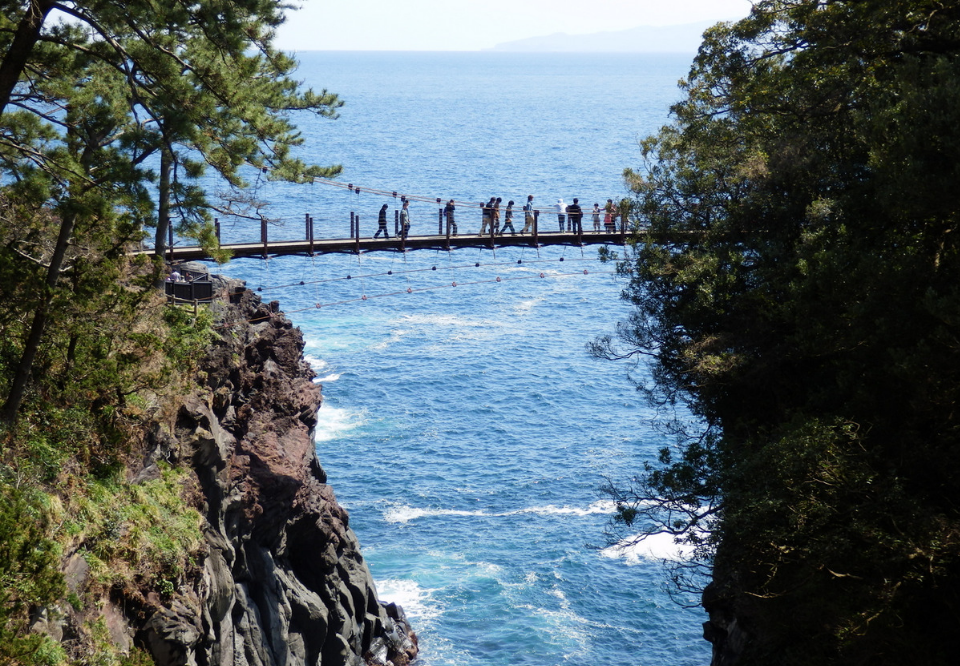 A large peninsula in Shizuoka Prefecture that protrudes into the Pacific Ocean, Izu Peninsula is a popular day trip and weekend getaway destination known for its hot springs and rich nature. Offering gorgeous beaches and rugged coastlines, Izu also has beautiful sakura, traditional shrines and temples, and incredible views of Mt. Fuji which is the area’s icon. In this article, we explore some of the popular attractions on the Izu Peninsula.

First up is the city of Atami, the gateway to the peninsula. Atami is a popular, well-developed resort town known for its vacation vibe and quality hot springs. 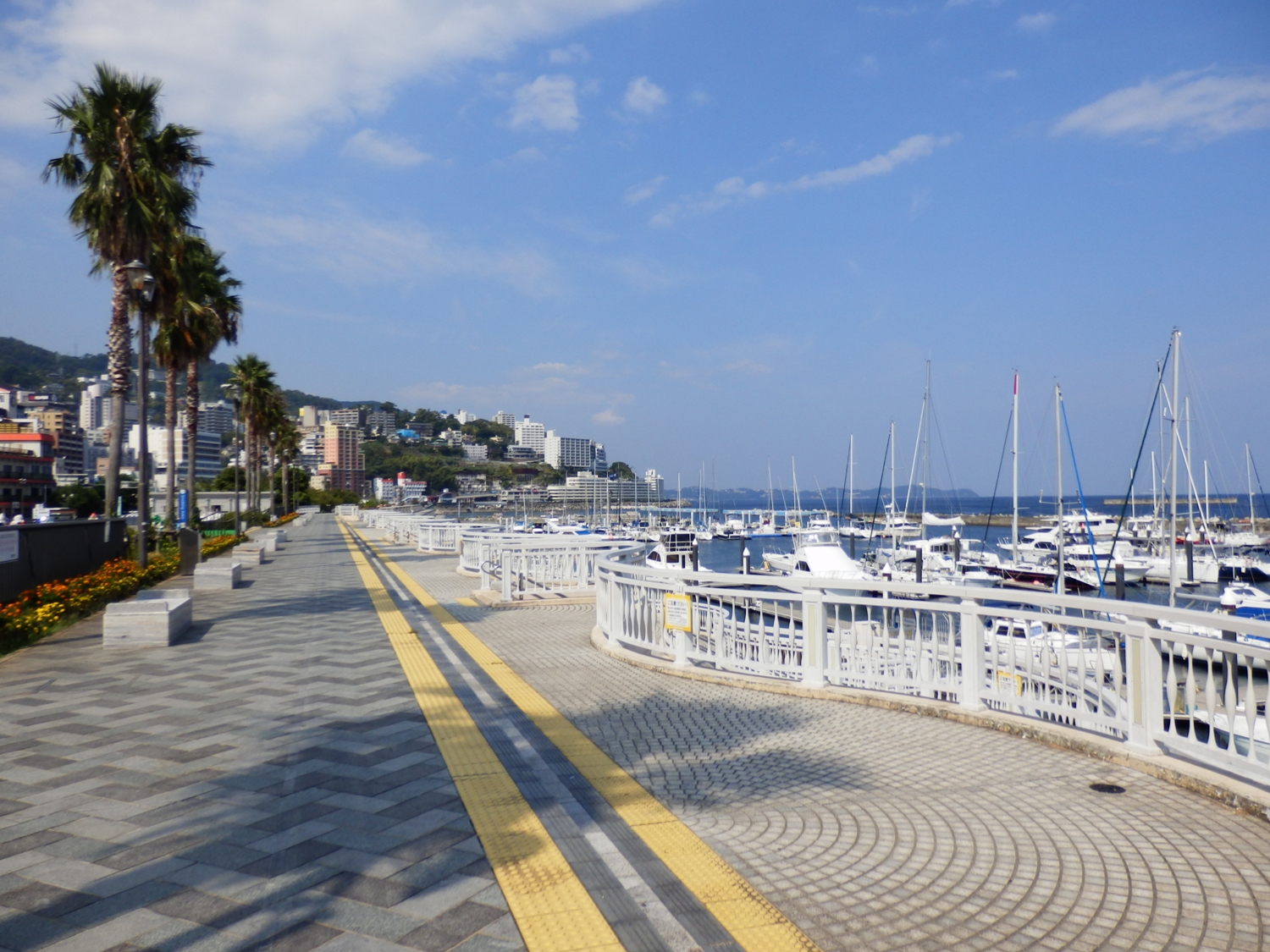 Check out the palm tree-lined Sun Beach which boasts beautiful blue water and white sandy beach. It’s actually a man-made beach, but draws throngs of visitors in summer! Just south of the beach is Atami Water Park (Shinsui Park) whose attractive Mediterranean-style waterfront promenade is perfect for a stroll. This area is also the venue for the famous Atami Fireworks Festival, which is held on specific dates year round, not just in summer but also in spring, autumn and winter! 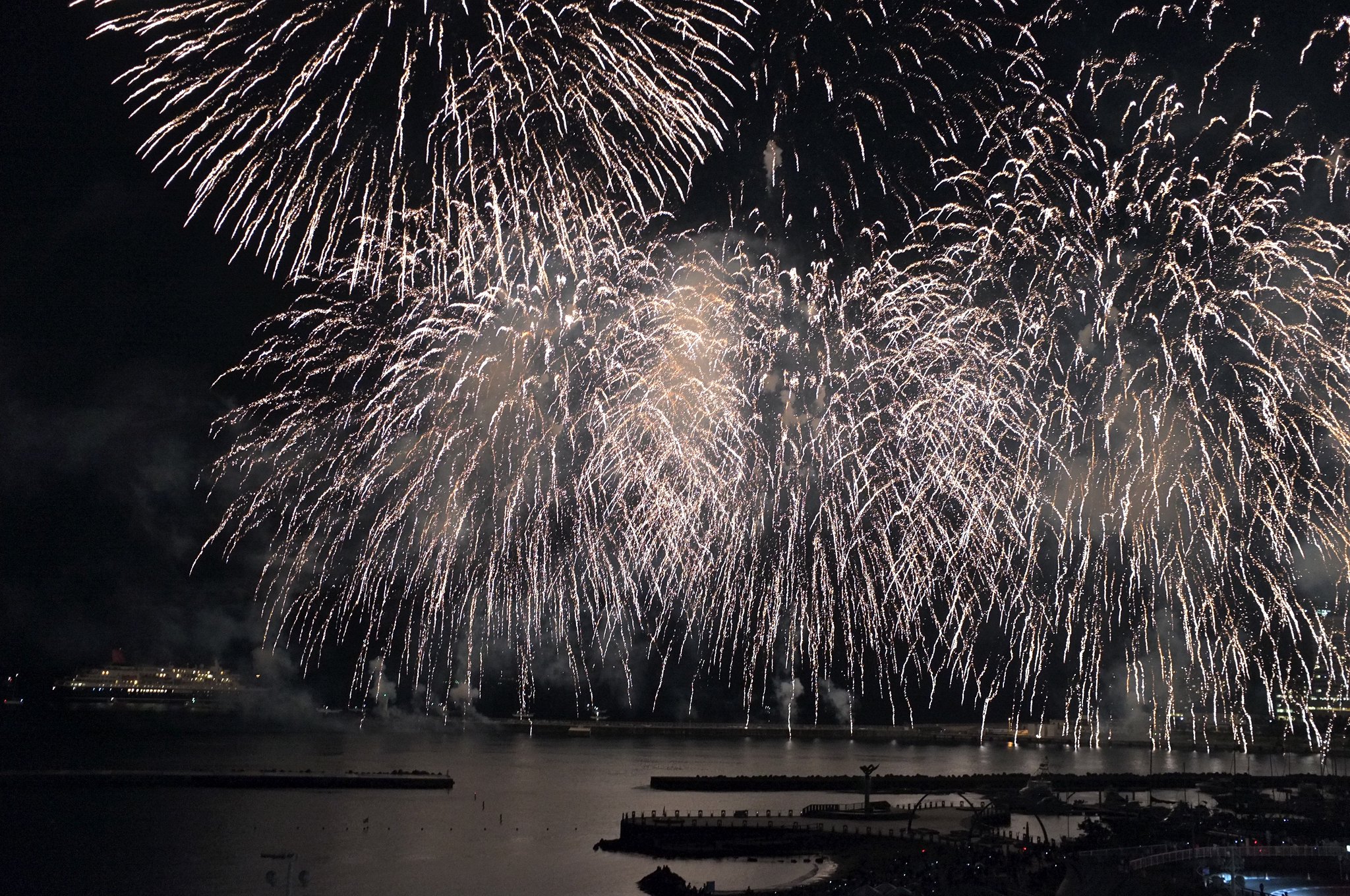 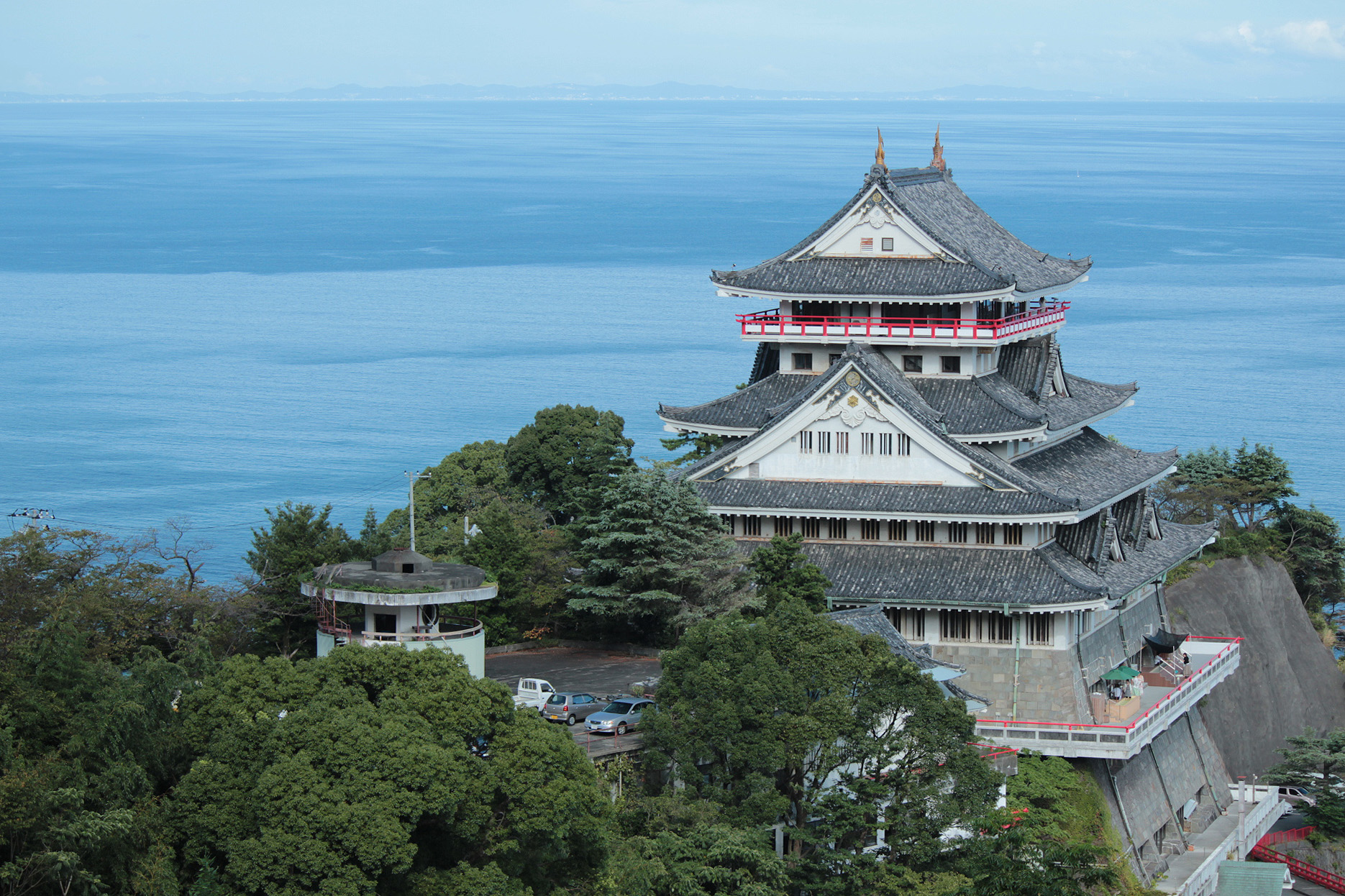 Atami is accessible from Tokyo via the JR Tokaido Shinkansen or the Tokaido Main Line. Atami Sun Beach and Water Park are 15 minutes on foot from Atami Station. Atami Castle is 15 minutes by bus from the station via the Yuyu Sightseeing Loop Bus.

Going down from Atami, Ito is the easternmost city of Shizuoka Prefecture with hilly terrain and heavy indented coastline, a pretty dramatic landscape. 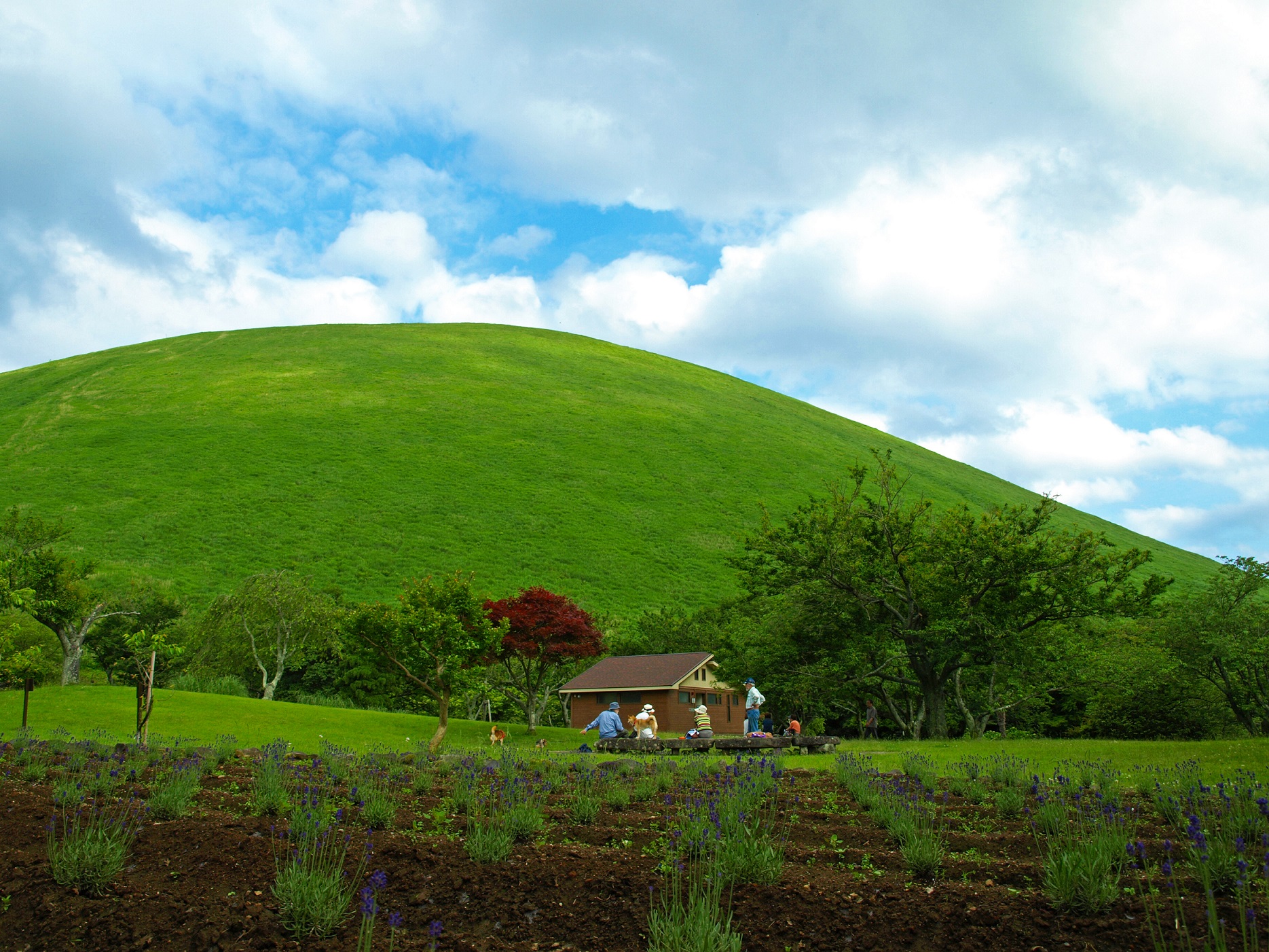 The city’s symbol is Mt. Omuro, a cute pudding-shaped extinct volcano which appears green, brown or black depending on the season. Its summit can only be reached by a chair lift (500 yen round trip), but there you can walk around the crater, enjoy breathtaking 360-degree views that include Mt. Fuji, Mt. Hakone and Izu Islands, or even try your hands at archery inside the crater! It is also known for the mountain burning ceremony with a history of over 700 years. It is held on the second Sunday of February each year. To witness the big fire, Sakura no Sato Park at the foot of Mt. Omuro is the best spot. 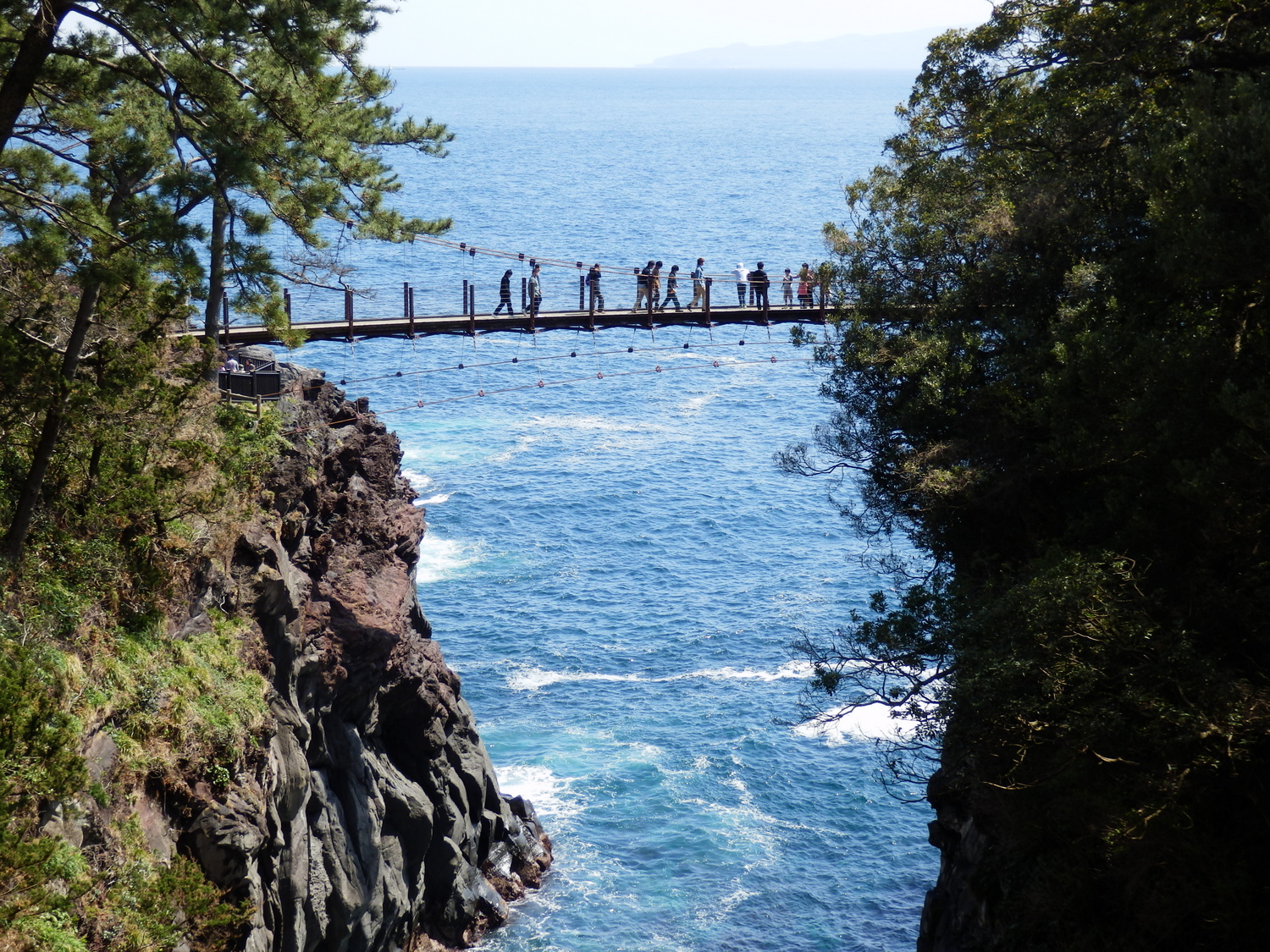 Another must-see in Ito is Jogasaki Coast, famed for its jagged coastline, sheer cliffs and rock formations. Soak in the views by following the walking trail that stretches 9km along the coastline, or go straight to the highlights – the 48m long Kadowaki Suspension Bridge that gives you the thrill of crossing between two cliffs from 23m above the sea, and the Kadowaki Lighthouse with free observation decks where you can get great views of the coastline and Izu Islands when visibility is good.

Ito is accessible from Atami via the JR Ito Line. To go to Mt. Omuro, take a bus bound for “Shaboten Koen” シャボテン公園行き from Ito Station or Izu Kogen Station and alight at the last stop. For Jogasaki Coast, the Kadowaki Suspension Bridge and Lighthouse is about 30 minutes on foot from Jogasaki Kaigan Station. Alternatively, take a “Kaiyo Koen” bound bus 海洋公園行 from Izu Kogen Station and alight at Izu Kaiyo Koen stop.

Head inland to Shuzenji, where the oldest hot spring town on the Izu Peninsula, Shuzenji Onsen, is located. Surrounded by mountains, the area has been attracting visitors with its rich history and beautiful natural setting. There is quite a lot to see and do here. 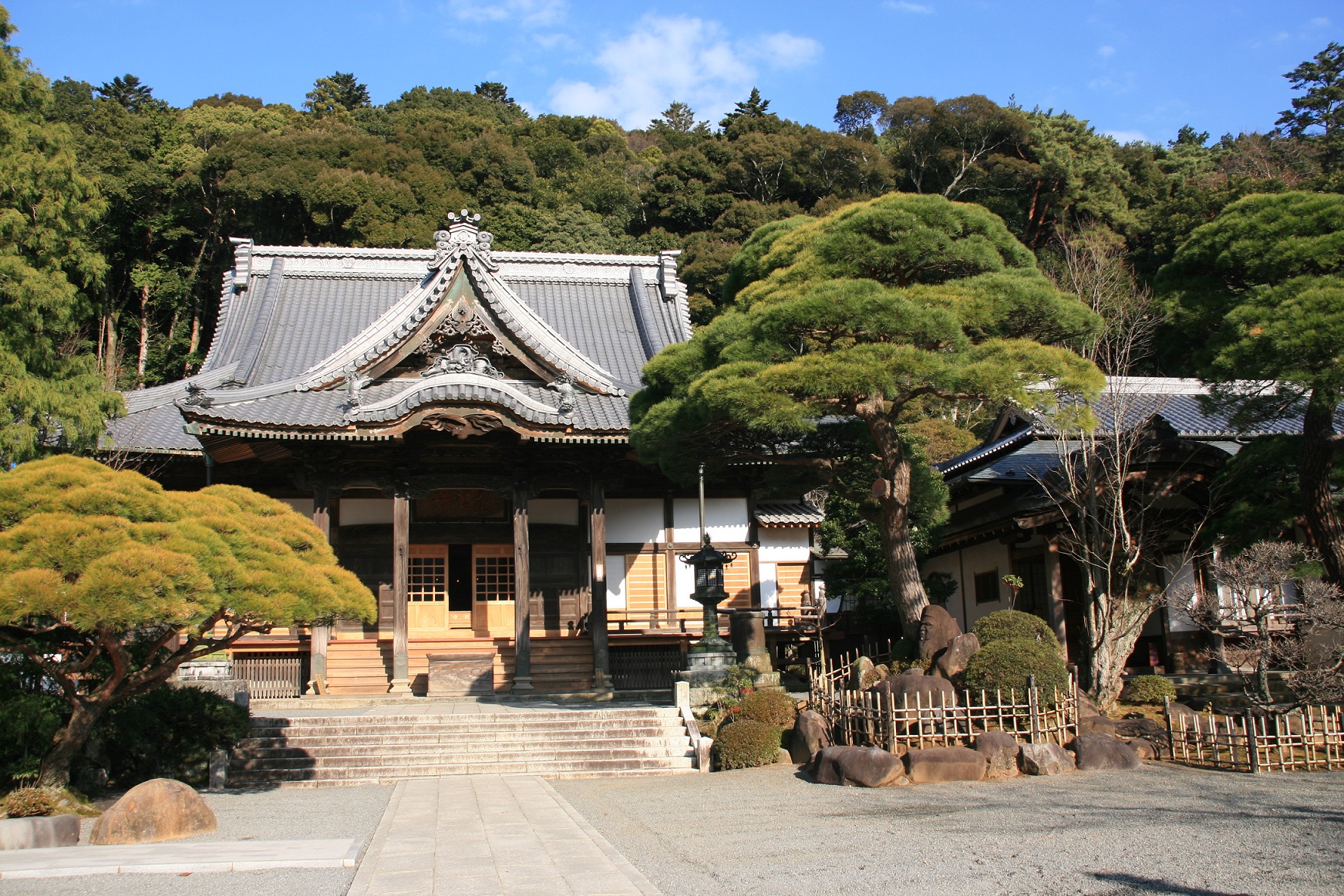 Walk along the Katsura River that is flowing through the town centre, you will find Shuzenji Temple, after which the town is named. Founded by prominent Buddhist monk Kobo Daishi in 807, the ancient temple’s main Buddha statue is an important cultural property of Japan. The town’s first and most famous bath, Tokko-no-yu was created by Kobo Daishi as well. Located in the middle of the town beside the river, it is now used as a public foot bath that can be enjoyed free of charge. 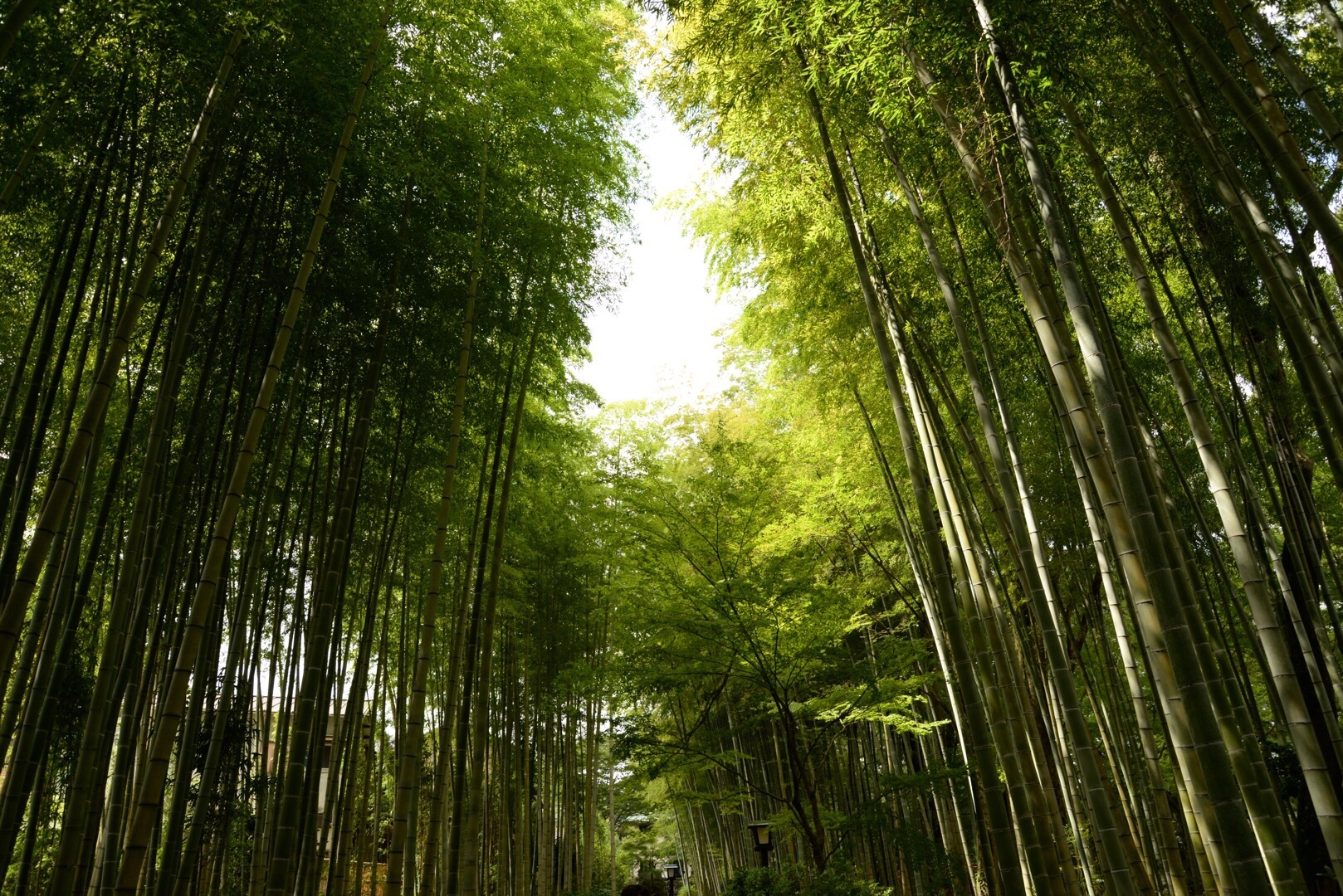 There are bamboo groves that remind visitors of Kyoto. Stroll through the bamboo forest and stop by one of the red bridges along the way, the scenery here looks especially stunning with the colourful leaves in autumn. Shigetsuden is one of the notable historic sites in Shuzenji. A Buddhist sutra library, it is the oldest wooden building in Izu. Within the compound is the resting place of Minamoto no Yoriie, the second shogun of the Kamakura shogunate. 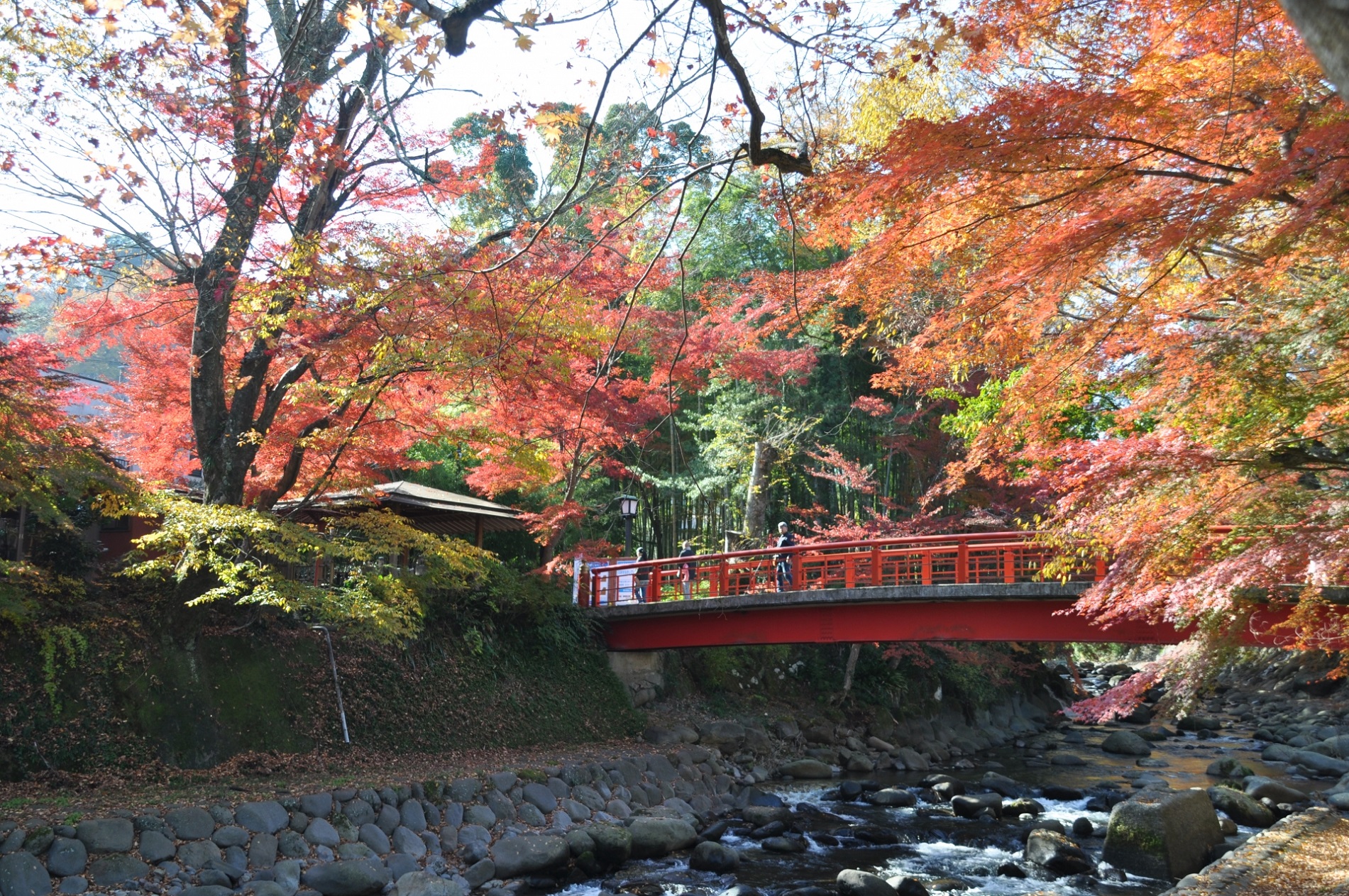 To enjoy Shuzenji Onsen to the fullest, an overnight stay in a ryokan is recommended. Even so, day trippers can still enjoy the area’s hot spring waters at Hakoyu, a relatively new public bathhouse (admission: 350 yen), or at the inns that open their baths to non-staying guests during the day for a small fee.

Shuzenji Onsen is a 10-minute bus ride from Shuzenji Station, which can be reached from Mishima Station via the Izuhokane Railway Sunzu Line. Mishima Station is just one stop away from Atami Station on the JR Tokaido Shinkansen. 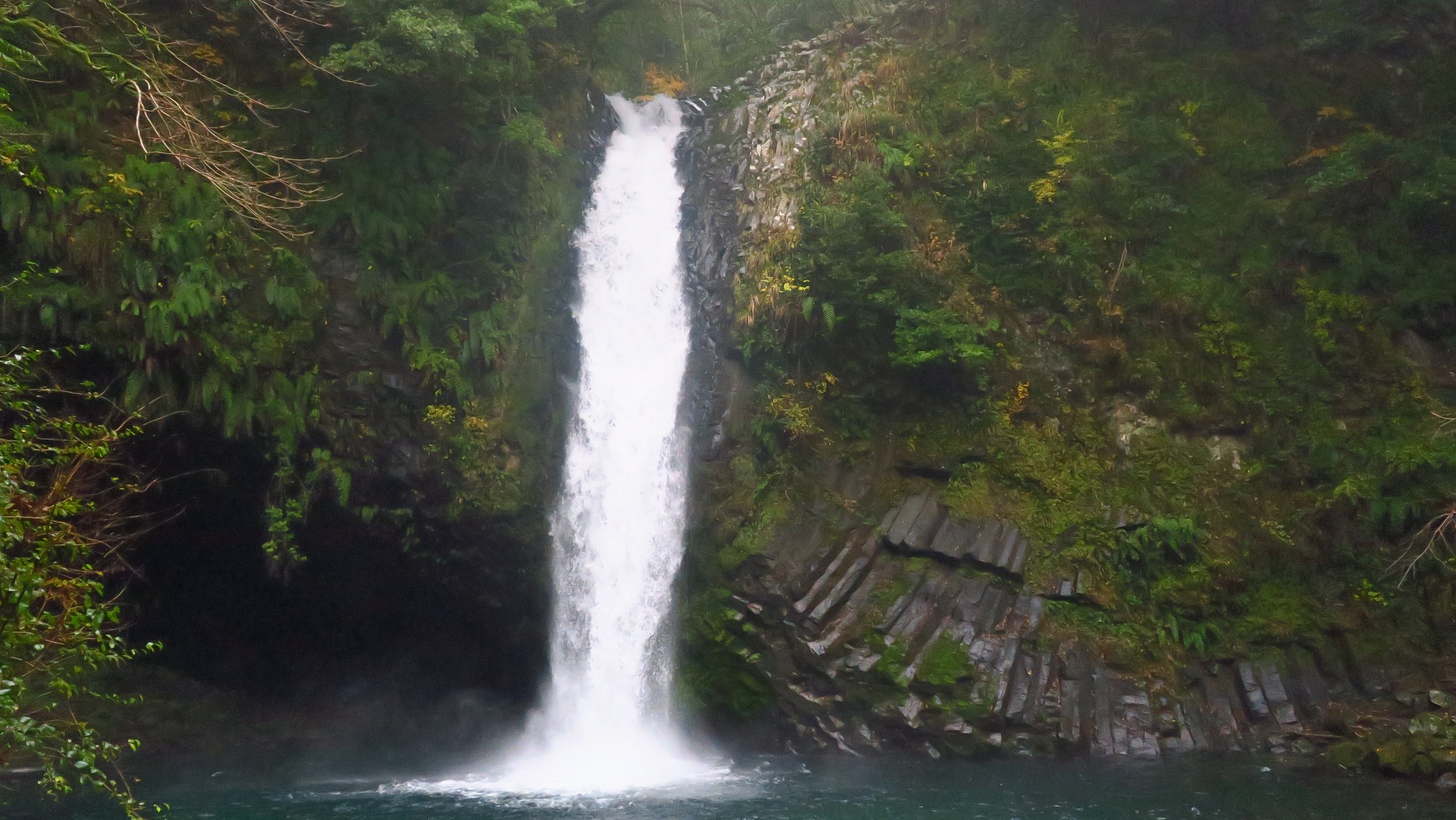 Finally, Joren-no-Taki or Joren Falls to the south of Shuzenji is a beautiful waterfall situated in Mt. Amagi. Standing at 25m high and 7m wide, it is very popular among visitors and can be reached by following a series of steps that lead to the falls. Along the stream you will also see rows of wasabi fields – that’s right, wasabi is the area’s speciality product! Be sure to check out shops and eateries around Joren-no-Taki that offer a range of wasabi dishes, snacks and products – wasabi soft serve is a must try, there is wasabi shochu too!

Joren Falls is about 40 minutes by bus from Shuzenji Station, get off at “Joren-no-Taki” stop and walk for 5 minutes.