Start Your New Year with These Japanese Traditions No ratings yet.

Hokuriku Itinerary for Muslim Travellers (Part 1) No ratings yet. 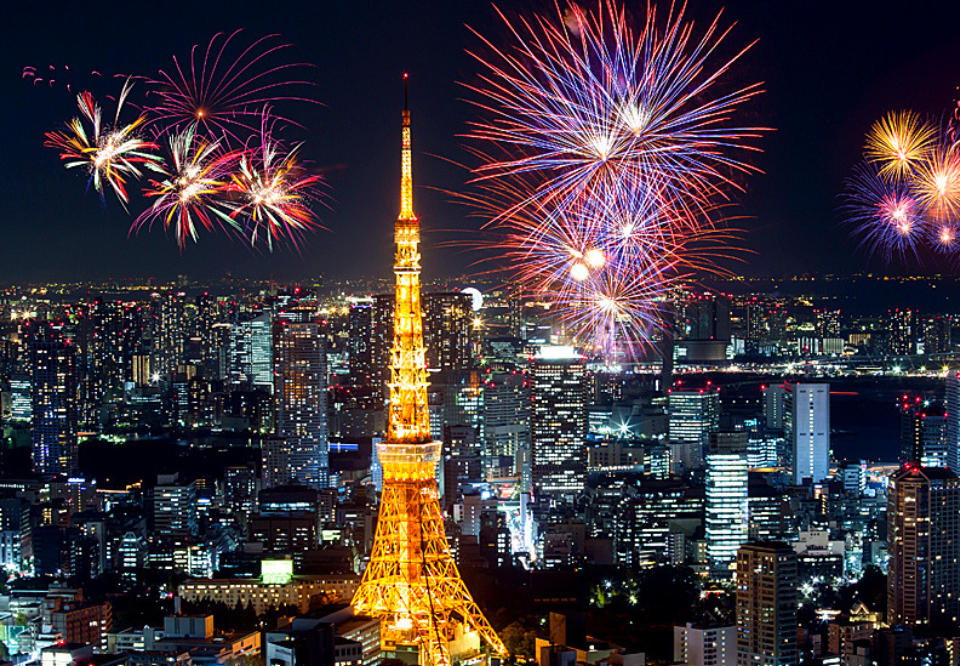 To all the readers of Japan Walker Southeast Asia, I’d like to take this opportunity to wish you a wonderful new year 2019, and may the year bring you a lot of happiness and joy. With that, I’m writing about the most awesome places in Japan to celebrate new year.

These places are located through the island of Japan, and if you are visiting any of these places, do check out how the Japanese usher in the new year. Most of these places include outdoors, and also indoor locations, with fireworks displays, concerts or even street parties. 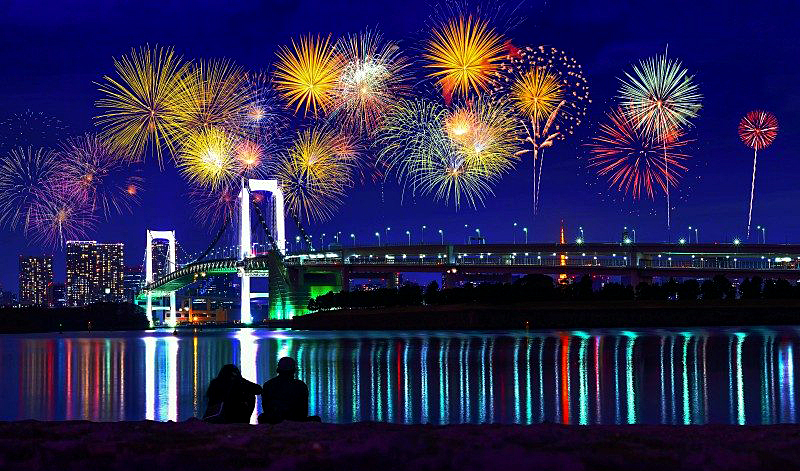 Fireworks during the new year in at the Tokyo Bridge.

The Sunshine Building is one of the tallest buildings in Tokyo and has an indoor 360 degrees observation deck called Sunshine 60. Every year, they organize their own countdown on the 60th floor, which is 251 meters above sea level, and you can see the entire view of Tokyo with fireworks going on all over.

Namja Town is another place in Sunshine City where you can experience one of the weirdest new year celebrations too. For 2019, they are organizing a Namja Evil Festival, which is horror theme to welcome the new year. This should be quite interesting for those wanting a different kind of experience.

Sunshine City is my recommended choice to catch the new year countdown when you are in Tokyo, and the place is family friendly and easily accessible. Book your tickets in advance here. 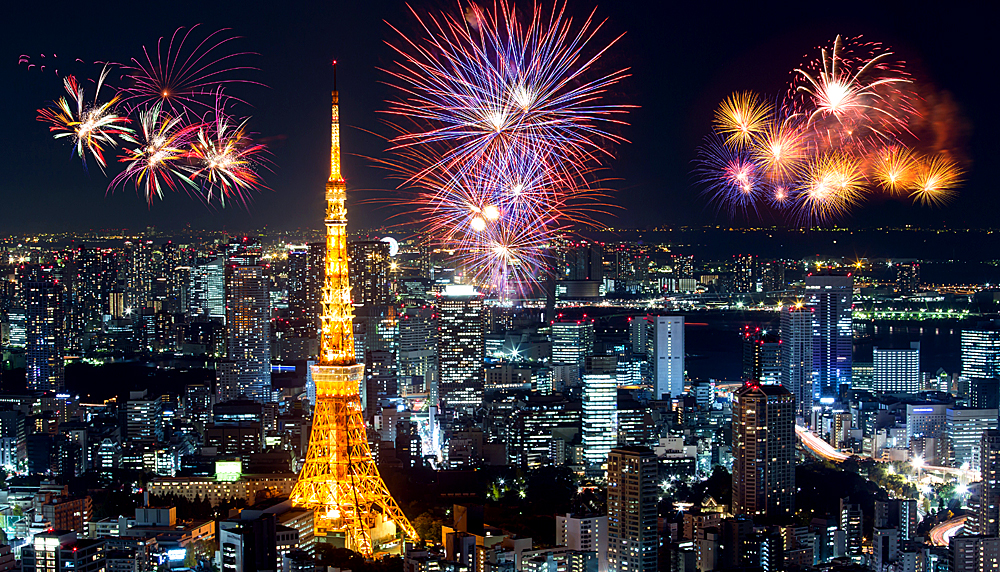 Fireworks at the Tokyo Tower.

This is one of the most famous locations where fireworks displays will dazzle the Tokyo skyline on the countdown. The best part about this location is that you can see the fireworks from all directions in the Minato Ward, and if you are the type that prefers to have a quiet new year, book a hotel with the Tokyo Tower view, and you will be in for an amazing fireworks show on new year’s eve.

A prominent tourist structure in the heart of Tokyo that will be one of the most visited places during the new year. To witness the amazing fireworks here, either you get to the top of the tower or view it from a distance. One of the recommended places to catch this is no other than around the Asakusa area of Tokyo.

View of the Tokyo Skytree and fireworks from Asakusa.

This is more for the younger generation where Shibuya is one of the lifestyle and night life areas of Tokyo. Celebrations include street parties, smaller displays of fireworks and thousands of well wishers. Parties at restaurants, bars and clubs are the main itinerary in Shibuya, and is not suitable for those with kids. For those who love the Japanese Pop Culture, this is where you should be celebrating the new year in Japan. For the most happening place here, it is no other than the world-famous Shibuya Crossing.

Another nightlife and entertainment area of Tokyo, with many Izakaya, bars, cafes, restaurants, karaoke and clubs. Perfect for the young travelers who love to party till the wee hours of the morning in Tokyo. Neon lights dominate Shinjuku while the new year celebrations can get a little messy with many locals and foreigners partying and drinking here. Not recommended for family travelers. 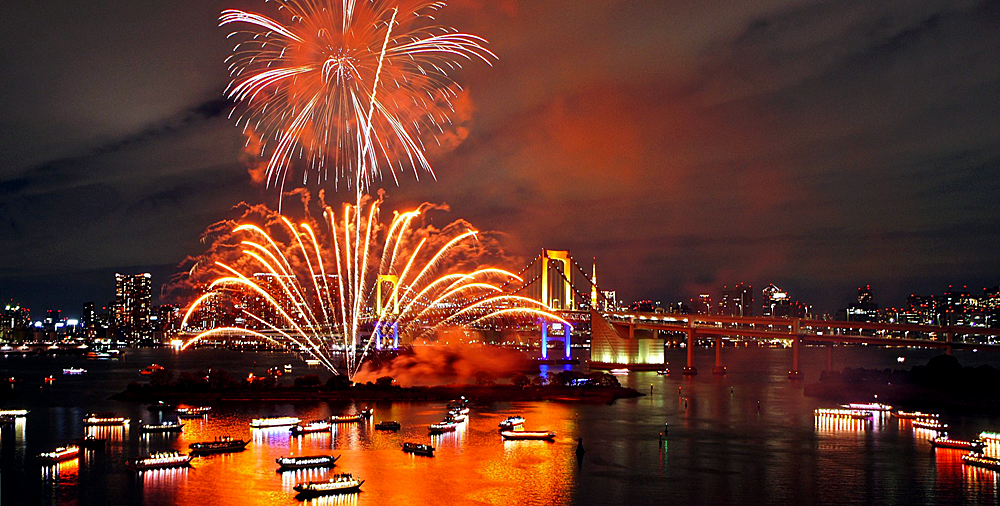 Fireworks at the Tokyo Bay Area.

For those wanting a different kind of new year experience, try taking the Tokyo Bay New Year’s Eve Cruise, which cruises down the bay area just before the countdown. This cruise includes a buffet dinner, champagne and from the cruise, you will see the beautiful fireworks against the Tokyo skyline at the stroke of midnight.

For those travelling with kids, this is one of the best places to catch the New Year’s Eve celebration and both Disneyland and Disney Sea have their own countdowns complete with fireworks and Disney Characters. Who wouldn’t want to be wished ‘Happy New Year’ by Mickey Mouse, Donald Duck or Goofy? 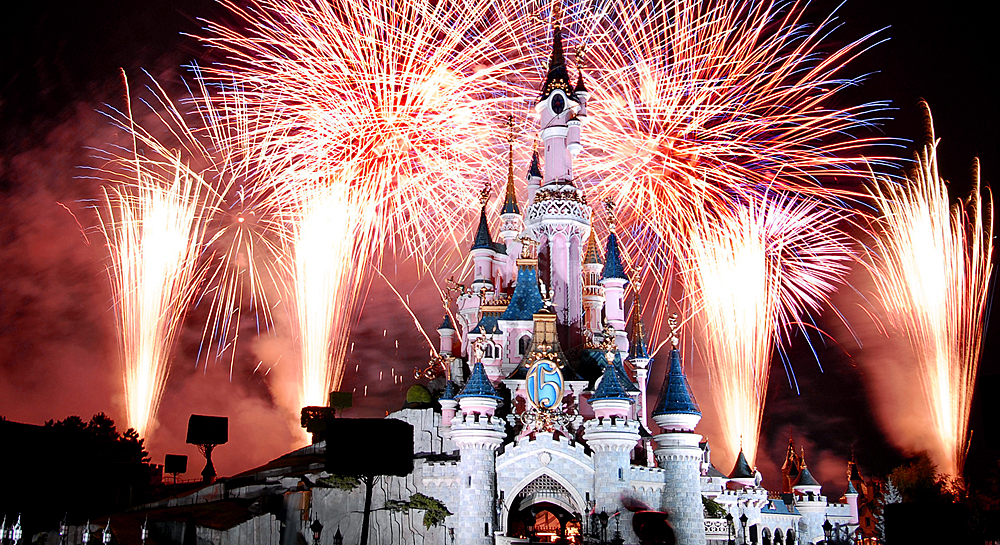 Massive fireworks at Tokyo Disneyland for the new year.

This is one of the strange and quirky ways to witness a new year’s celebration in Tokyo. Based on a legend, foes from the world over would gather under a large tree on the eve to usher in the new year. This strange event was commemorated in 1993, and now, thousands of people come here, with kids dressed as foxes, holding paper lanterns. This is truly one of the more unique new year celebration experiences in Japan.

For photographers or those who want to get the best spectacular location to see the new year fireworks, the Kasai Rinkai Park is the place to be at. A ¥700 entrance charge allows you to get the most suitable vantage point to view or photograph the fireworks display at Tokyo Bay, including the one from Tokyo Disneyland and Disney Sea.

This is a relatively a little Tokyo secret spot where many photographers will camp out for the Tokyo Bay fireworks show. This park is just before the Wakasu Seaside Park and Golf Course and faces the bay area where Tokyo Disneyland and Disney Sea. Most of the time, local photographers will drive here as the closest train station is Shin-Kiba Station, which is only a 10 minute walk to the park. 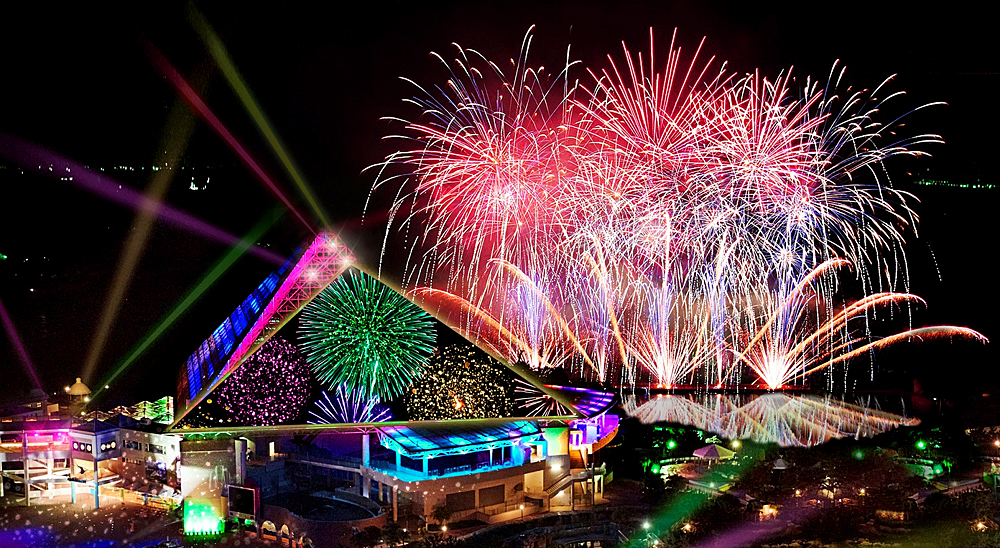 There are numerous places to usher in the new year in Yokahama, and probably the most famous is at Hakkeijima Island or Happy Island, where the Hakkeijima Sea Paradise is found.

This resort and theme park island is filled with non-stop celebrations, attracting thousands of local and foreign revelers for the new year. It is said that over 3000 fireworks are let off to usher in the new year here, complete with parties, entertainment and performances that go on till 8.00 AM the next day. This is also called the Happy Island Countdown 2019, and you can catch the fireworks display at the Boardwalk area here.

Osaka is the second most visited city in Japan, and to usher in the new year, there are numerous locations to explore, ranging from theme parks to monuments in the city of Osaka.

This is probably the most famous place in Osaka where they have a massive new year countdown celebration in the theme park. You can only imagine what goes on here during the celebrations, especially with all the movie and cartoon characters participating in the countdown. Fireworks are not to be missed for the final countdown at Universal Studios Japan or USJ. This place is highly recommended for those travelling as couples or with families.

Fireworks seen by the Osaka Castle during new year.

The most popular place in Osaka where everyone will visit, and you can catch the independent fireworks being let off during the countdown. Best location to view this is from the main bridges where the famous Glico Man neon lights are found. There is also a river cruise for those who want to experience something different during the new years eve countdown. 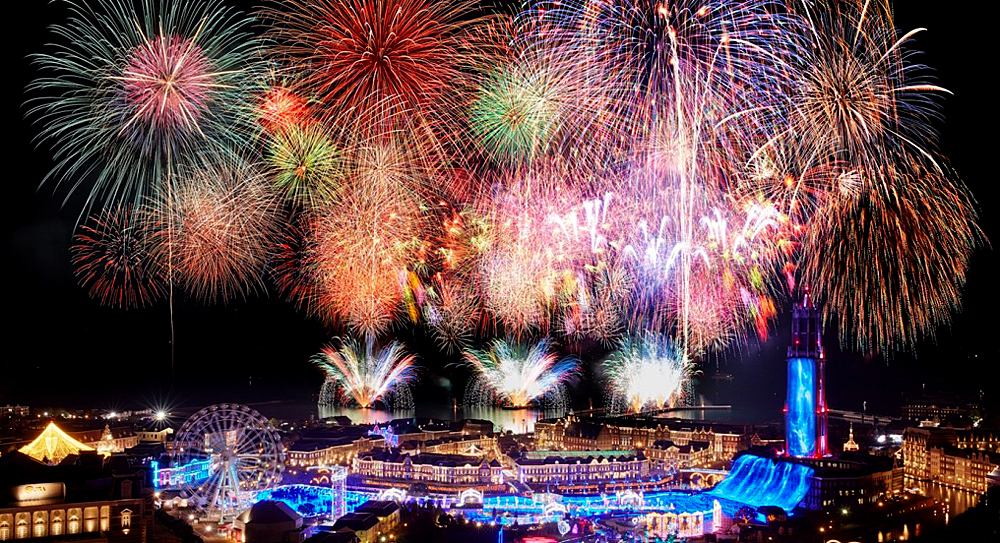 One of the most spectacular fireworks for the new year is at Huis Ten Bosch Park in Nagasaki.

The biggest theme park in Japan is found here in Nagasaki City, and for anyone visiting Fukuoka in this part of Southern Japan, should also make your way to Nagasaki for the new year countdown.

This is known as the largest theme park in Japan, and they truly know how to celebrate new year with massive fireworks shows, a 13 million LED light illumination display and even a winter wonderland park. This place is perfect for families who want to see a different side of Japan. 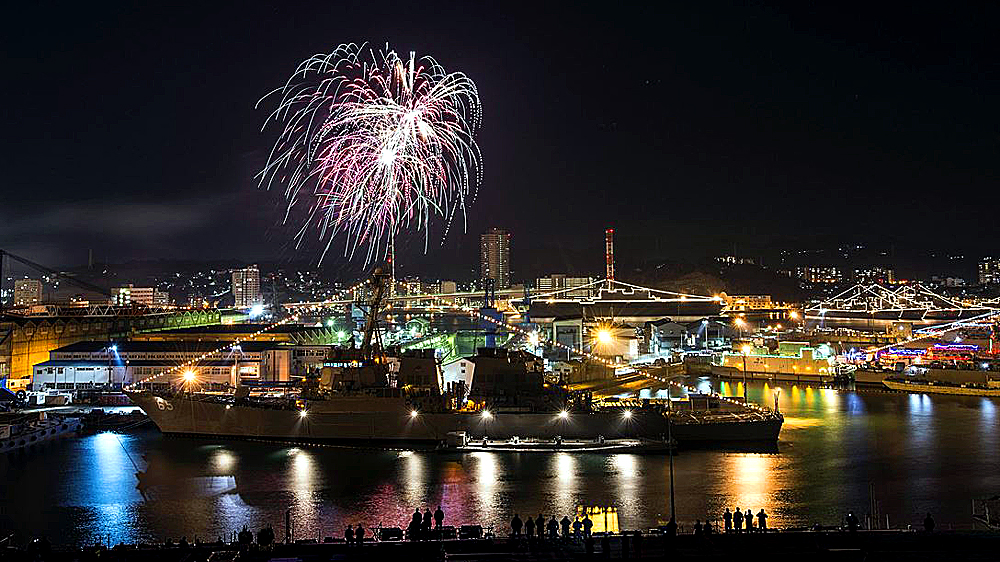 Fireworks during the new year at Yokosuka, Kanagawa. Photo DoD US.

This prefecture is located in the south of Tokyo in the Kanto Region, and where Yokohama is found. This is recommended for those who want to try something different as it is about two hours from Tokyo with train. 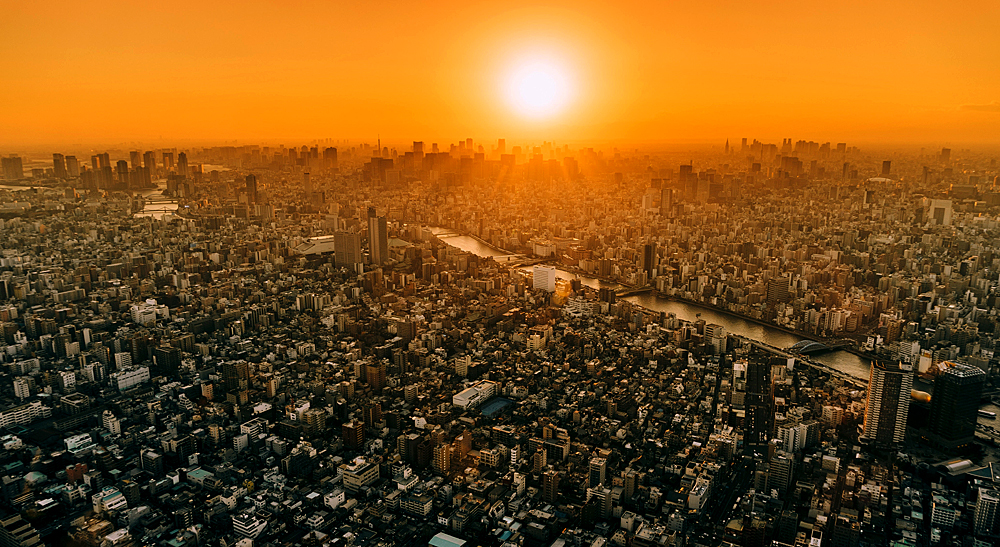 Beautiful sunrise on the first day of new year in Tokyo. Photo GoodFreePhotos.

This is a huge thing to the Japanese people, where they will find prominent, memorable and even religious locations to catch the first sunrise of the year. Many will travel overnight to these locations and be ready as early as 4.30 AM to usher in the sunrise for the first day of the new year.

Locations vary in every city throughout Japan, but below are some of the most prominent places to do so, if you are interested to participate in the first sunrise. Note that I have only listed the places around Tokyo, as there are just too many places all over Japan to be listed.

Tokyo Skytree – No doubt, this is one of the tallest structures in Japan, it attracts the Tokyo urbanites and also travellers to catch the first sunrise.

Sunshine 60 Building – This 360 degrees indoor observatory is highly popular among the Tokyo people and also travellers.

Hahajima and Ogasawara Town – Towns by the seaside to catch the first sunrise of the year, and popular among the locals.

Mt. Takao – For nature and outdoor lovers, they head here to welcome the first sunrise of the year. It is about three hours by train from Tokyo, and a casual trek up the mountain, located in the Hachioji area.