Missing Malaysia In Japan? Here Are 6 Malaysian Restaurants In Tokyo No ratings yet.

Daiso: What Should I Buy? Part 1 No ratings yet. 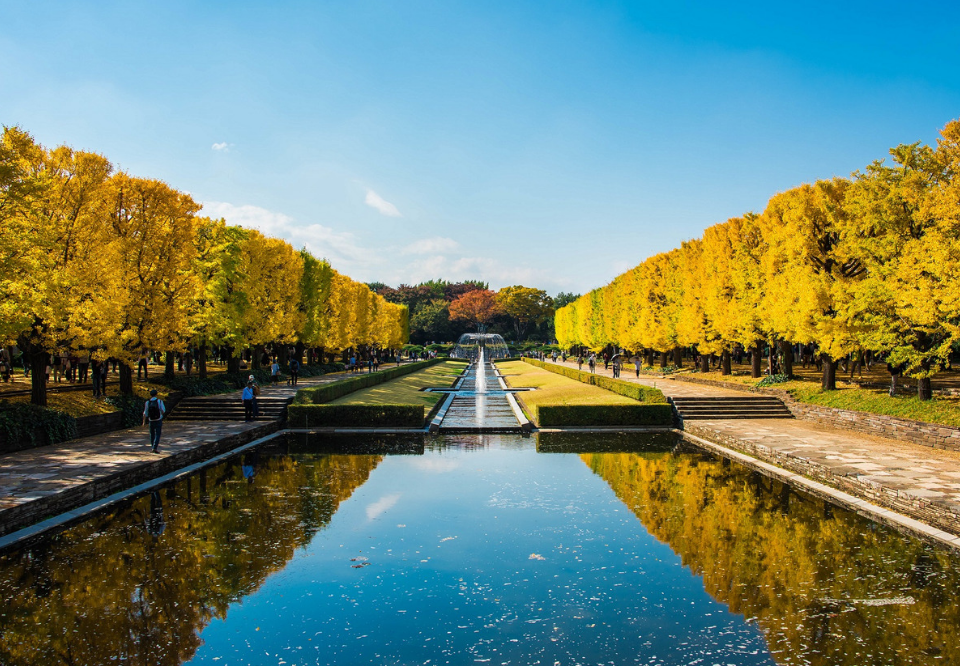 Ginkgo (icho, いちょう) is one of the popular trees in Japan. Not just planted as street trees, it can also be found in temples, shrines, and public parks throughout the country. In Tokyo, ginkgo is a tree with special status – it is the official tree of the Japanese capital, and its fan-shaped leaf the city’s symbol.

The tree may have been loved for many reasons – its long life span and resistance to insects and diseases, its medicinal properties (leaf), its fruit (ginkgo nuts), but the most simple and direct answer is apparently its stunning autumn foliage. 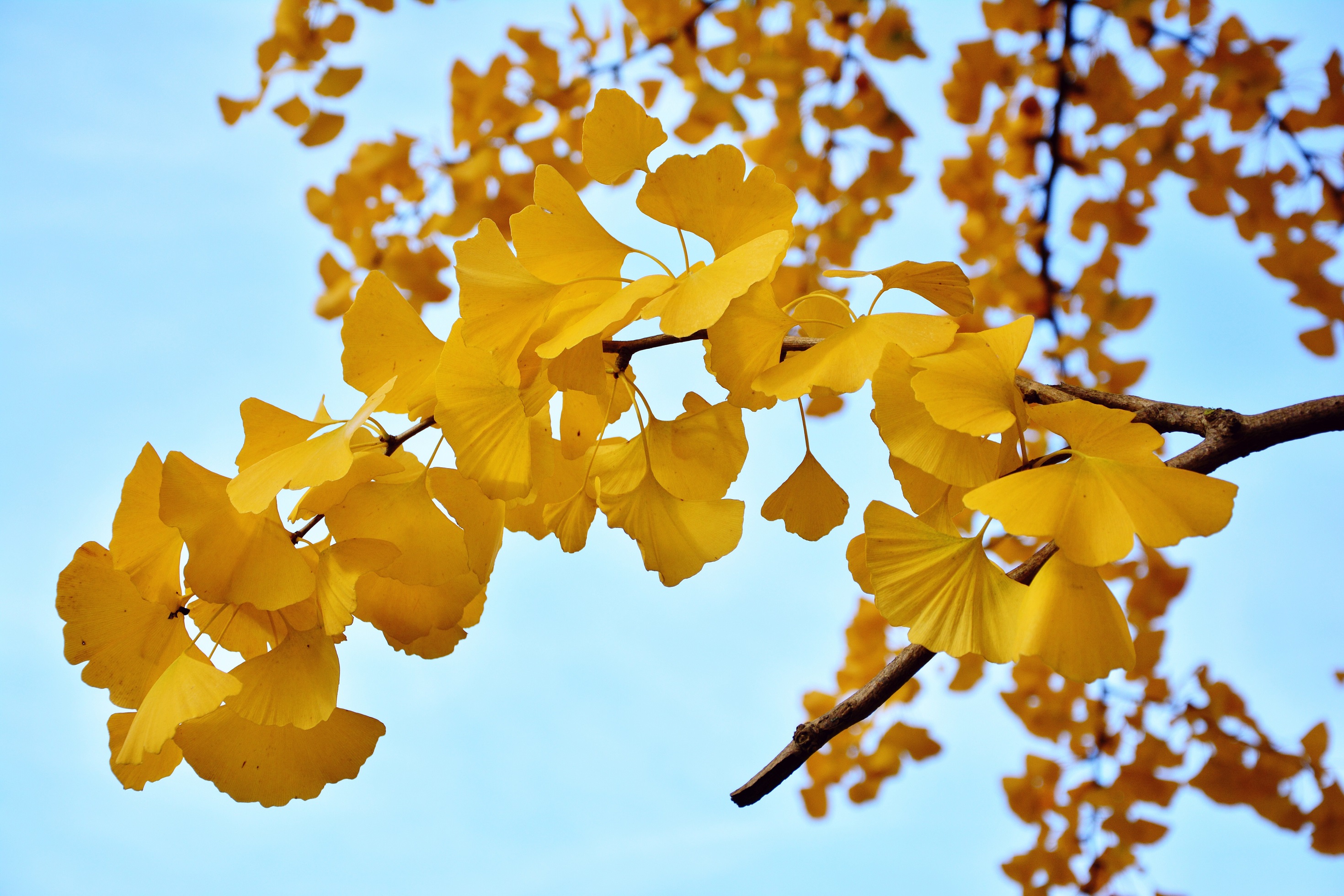 Ginkgo leaves turn into bright yellow in late autumn and fall shortly after (about 14 days). The fallen leaves then blanket the ground and form a dreamy carpet, conjuring one of the quintessential images of autumn.

This article introduces 6 popular spots to enjoy the glorious colour of ginkgo in Tokyo. Note while the trees start to change colour around mid-November, the best time to view this splendid foliage is from late November to early December. 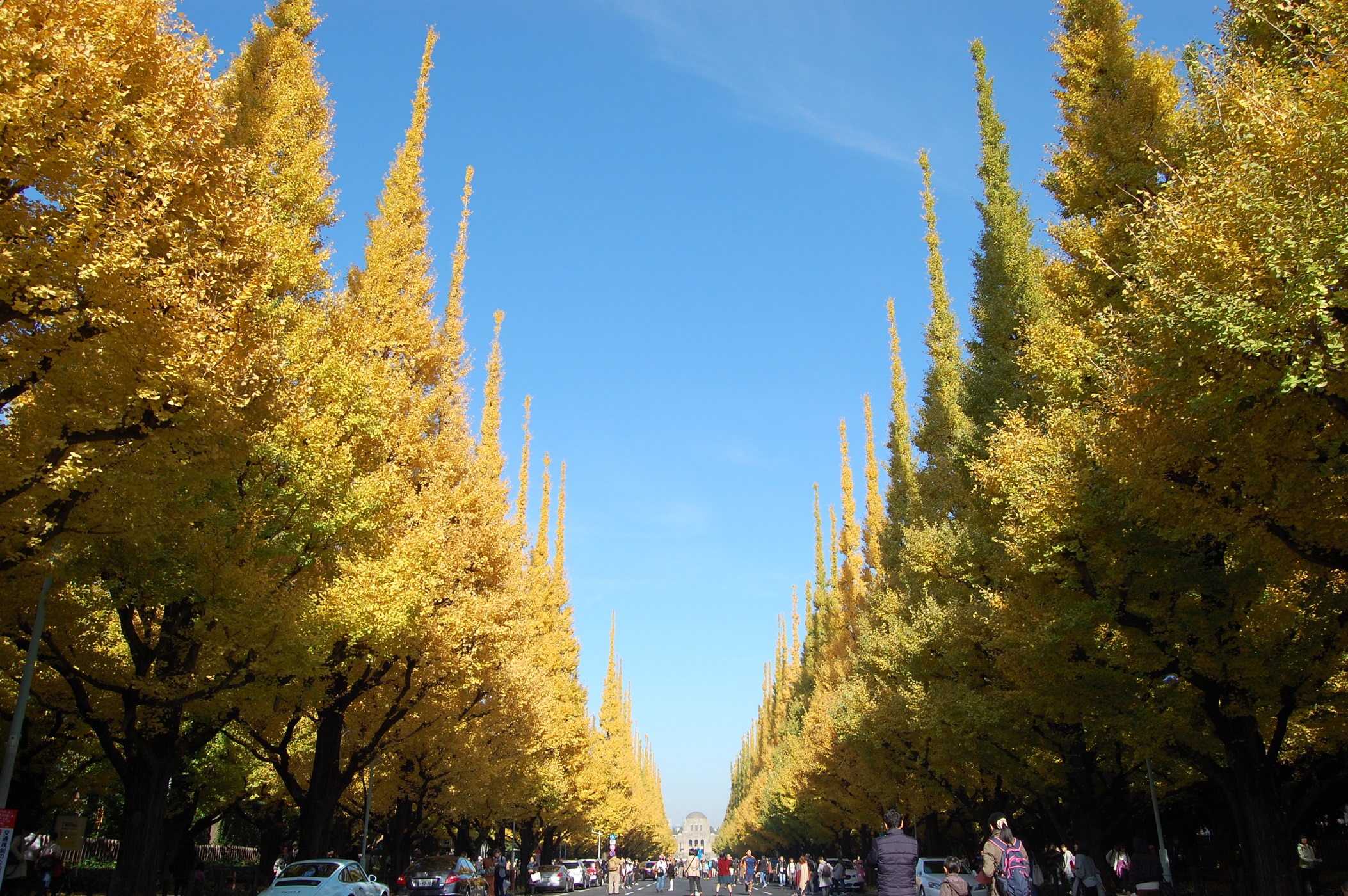 The ginkgo avenue leading up to the Meiji Memorial Picture Gallery in Meiji Jingu Gaien is undoubtedly popular during the autumn leaf viewing season, where nearly 150 immaculately trimmed ginkgo trees are seen lining orderly on both sides of the street. A well-known autumn icon of Tokyo, it is enjoyable enough to just walk under the canopy of golden leaves, though taking in the views from one of the sidewalk cafes along the street appears to be a good idea too.

Adding to the atmosphere is the Jingu Gaien Ginkgo Festival 神宮外苑いちょう祭り which is held from mid-November to early December. Here you can find dozens of food stalls selling various regional dishes, as well as booths that promote products from all over Japan. 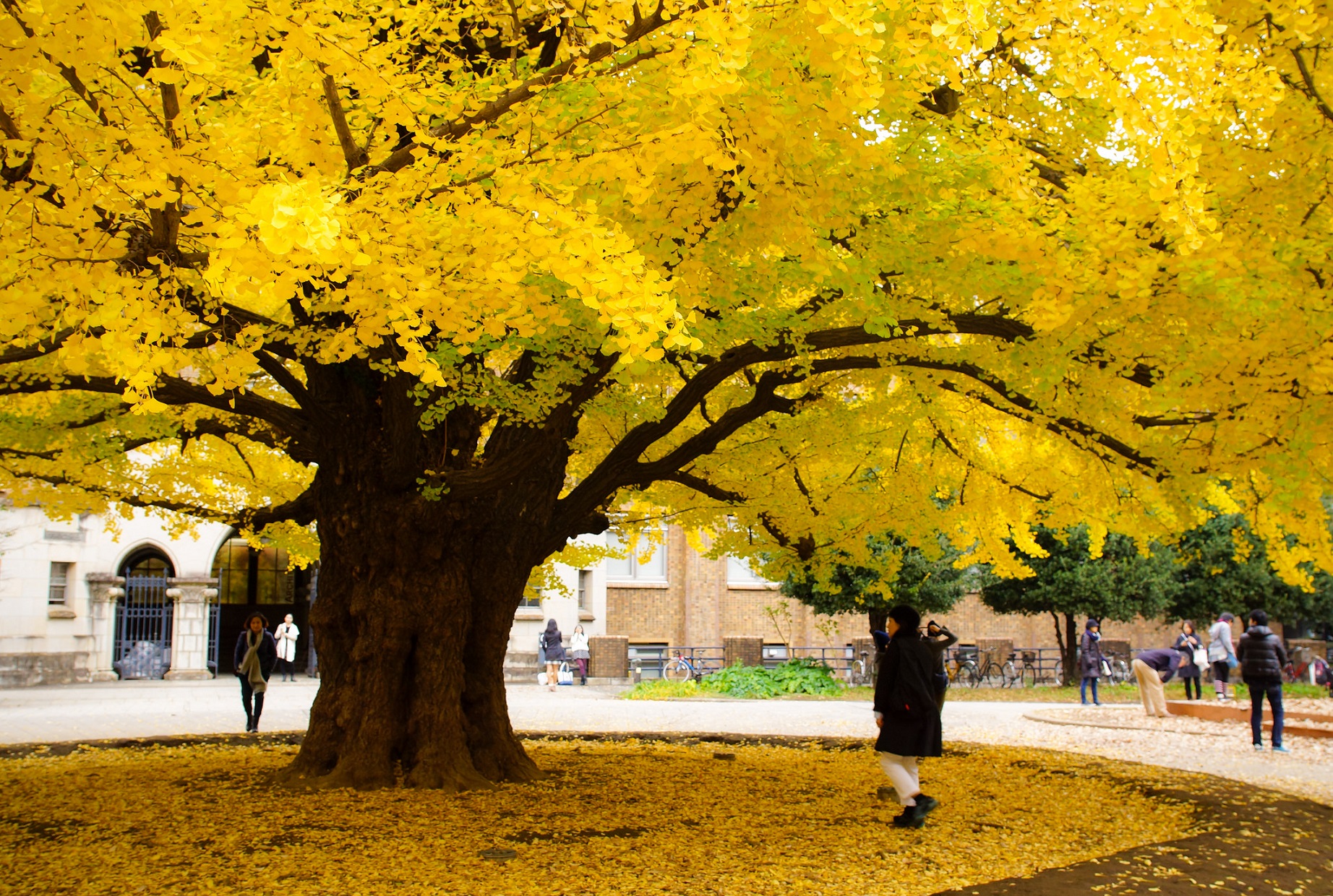 Ginkgo trees are planted throughout the Hongo main campus of Todai (abbreviation for Tokyo Daigaku). Come autumn, it is filled with a sea of yellow created by ginkgo leaves, the time of year when this one of the top universities in Japan looks the most beautiful.

The highlight is the avenue of ginkgo trees that extends from the main gate to the iconic Yasuda Auditorium. Experience the campus atmosphere as you enjoy the glorious colour of ginkgo, which matches the gothic-style buildings found across the campus perfectly. Don’t forget also to pay Hachiko the loyal dog a visit – yes, its second statue after the one in front of Shibuya Station! More information about visiting the campus, click here.

Access: 1 minute walk from Todaimae Station 東大前駅 on the Namboku Line, or 6 minutes’ walk from Hongo-Sanchome Station 本郷三丁目駅 on the Oedo Line. 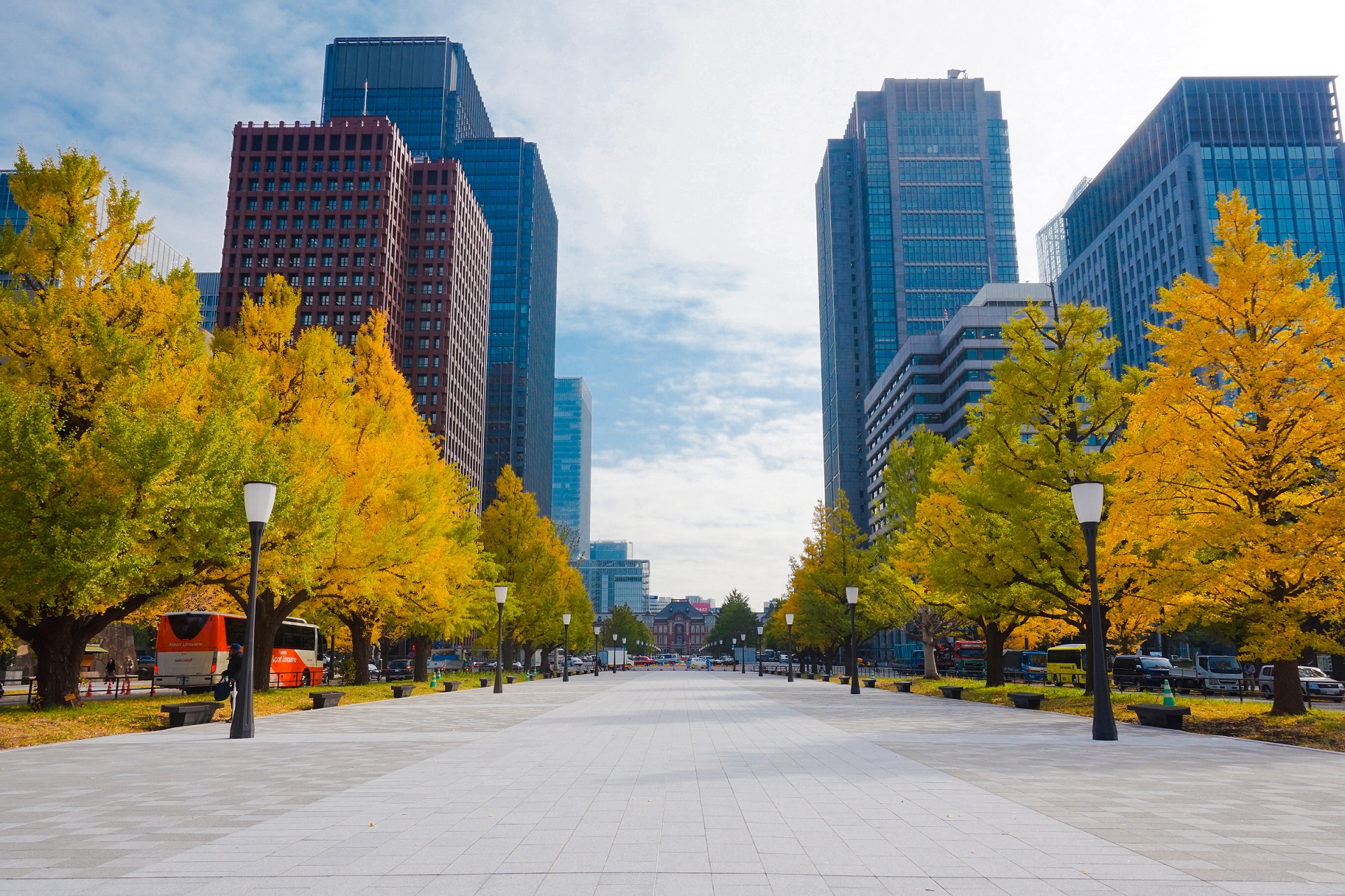 Catching autumn foliage is even possible in the Marunouchi district by walking down the Gyoko-dori 行幸通り which starts right in front of the classic red brick building of Tokyo Station and extends all the way to the Imperial Palace. The street is a popular photography spots around Tokyo Station, and it definitely looks more gorgeous in autumn as the stylish office buildings and the moat of the Imperial Palace are brightened up by the golden colour of ginkgo leaves.

A stroll from the station to the palace takes about 15 minutes. The street is illuminated at night, rendering it a different atmosphere. If you have the time, I recommend you to stay around a little longer to enjoy both the day view and night view! 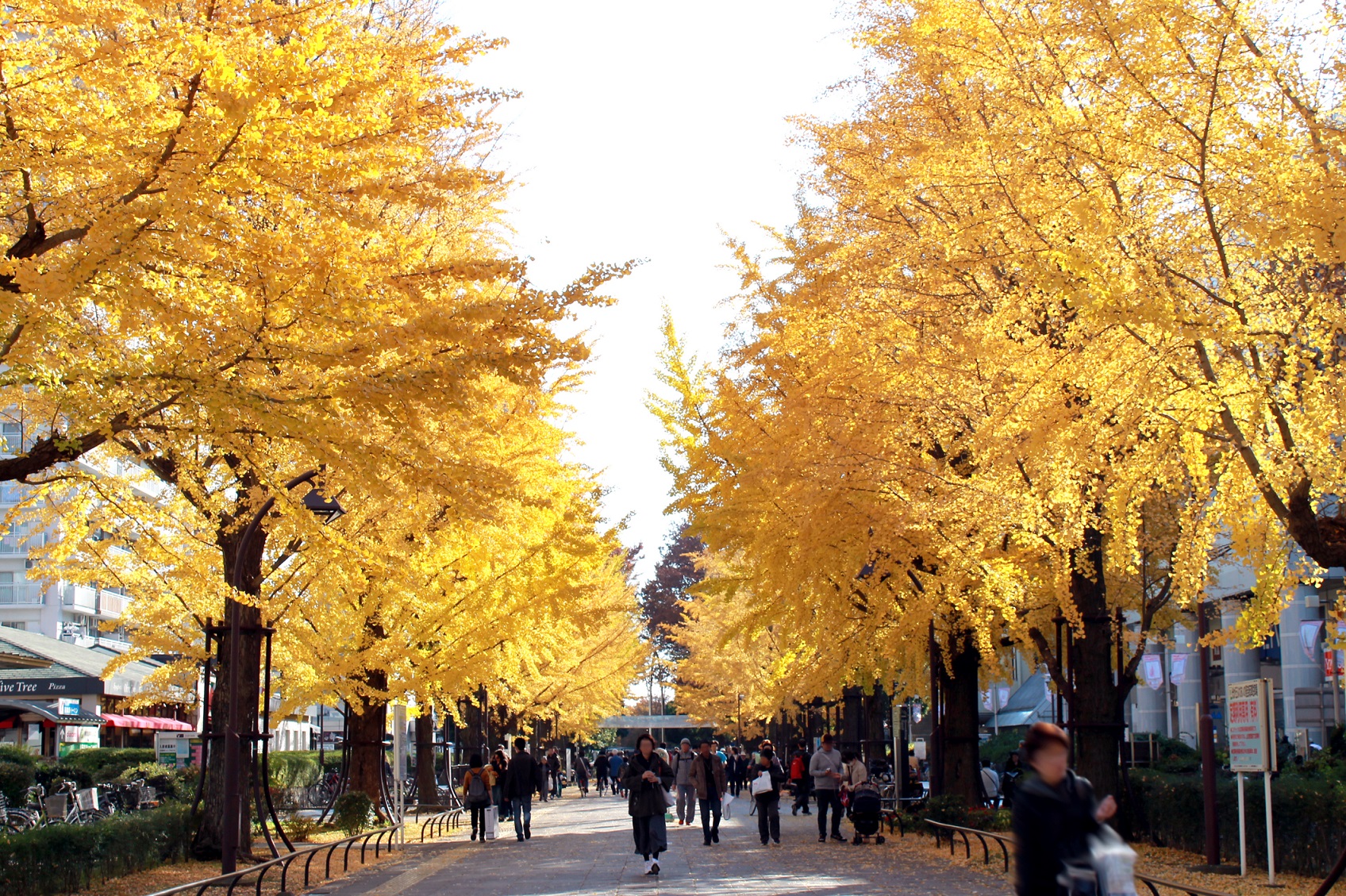 The golden tunnel of trees at Hikarigaoka Park is formed by 40 ginkgo trees which are over 100 years old. A popular spot for sakura viewing in spring, this public park in Nerima ward is no less attractive in autumn, when visitors come to enjoy a few peaceful moments walking through the colourful autumn leaves. The large park also has various sports and recreational facilities such as children playground, baseball fields and bird sanctuary, making it a family-friendly destination all year round. 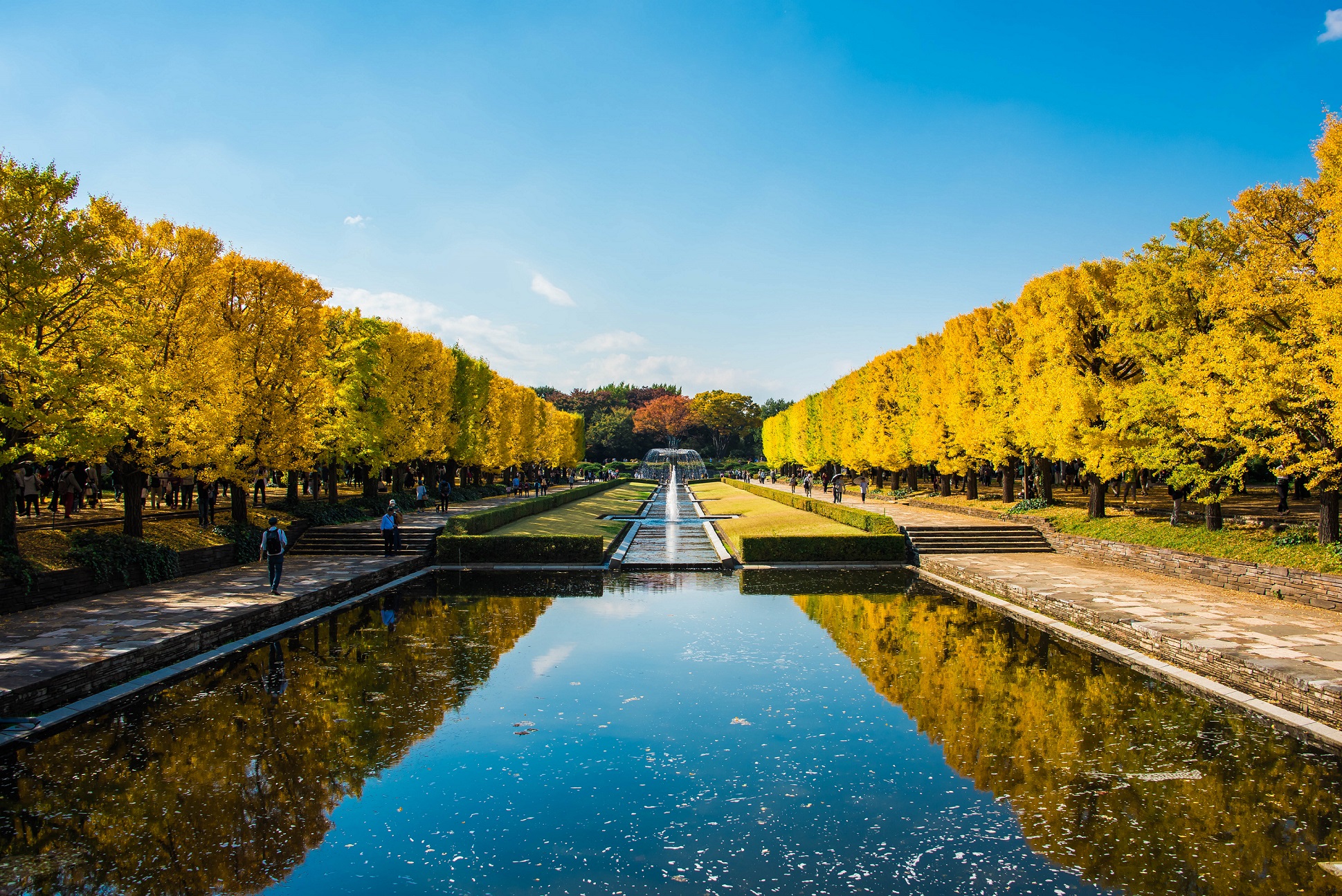 With features like seasonal flower fields, spacious lawns, gardens, and several recreational areas, this enormous national park (the size of 40 Tokyo Domes!) is a year round go-to place to enjoy nature and unwind with family and friends.

Among the attractions that represent the park’s autumn scenery is the ginkgo-lined canal and fountains near the main Tachikawa entrance, where more than 100 ginkgo trees are planted on the both sides of the 200 metre walkway. Just as beautiful is the 300 metre long ginkgo tunnel located near the park’s Sports Area うんどう広場, which looks like a golden passageway even after the leaves fall and carpeting the ground. 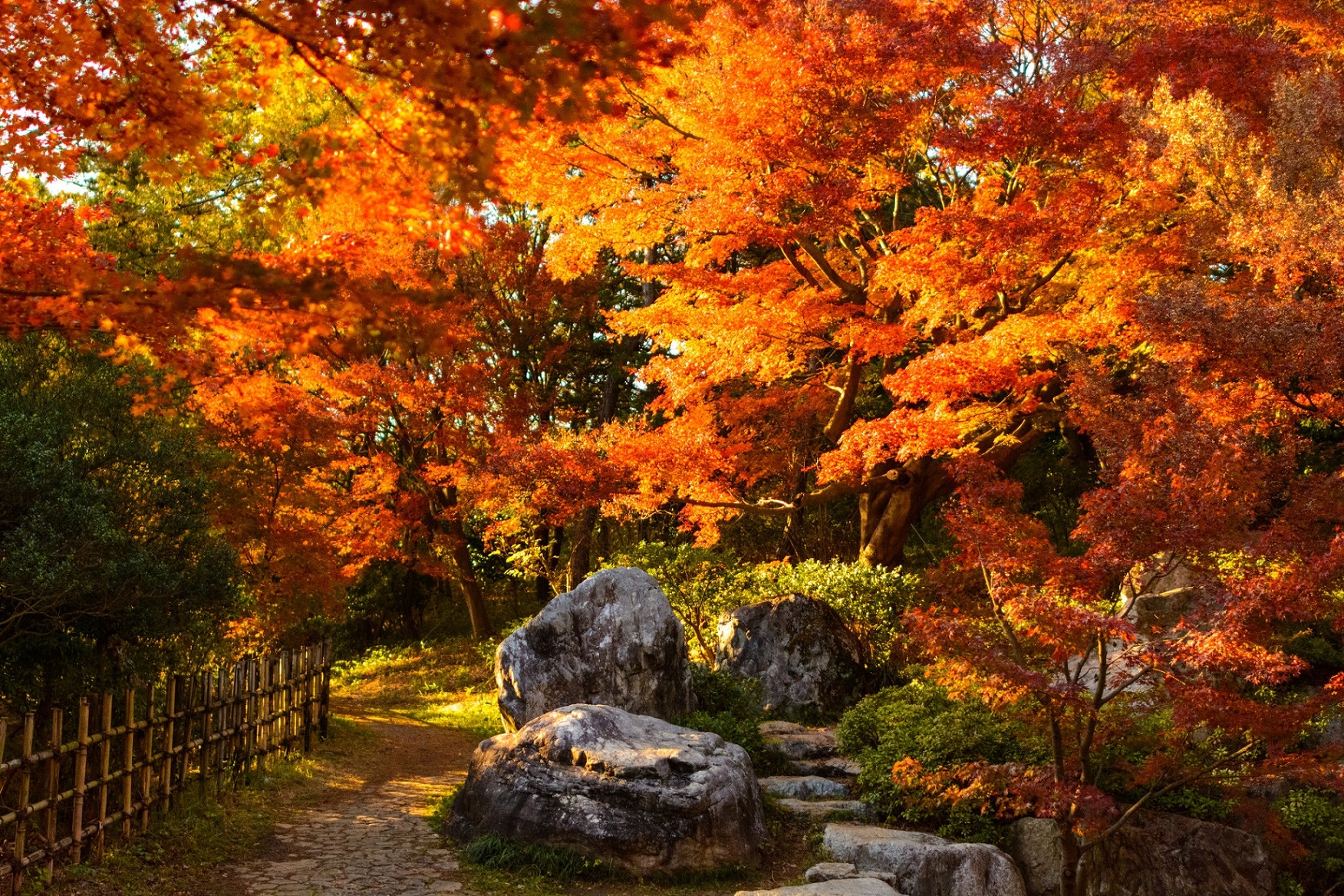 The leaves in the park change colours about two weeks earlier than their counterparts in central Tokyo. Come between mid and late November, you will be able to view the exquisite red maples together with the yellow ginkgo leaves. 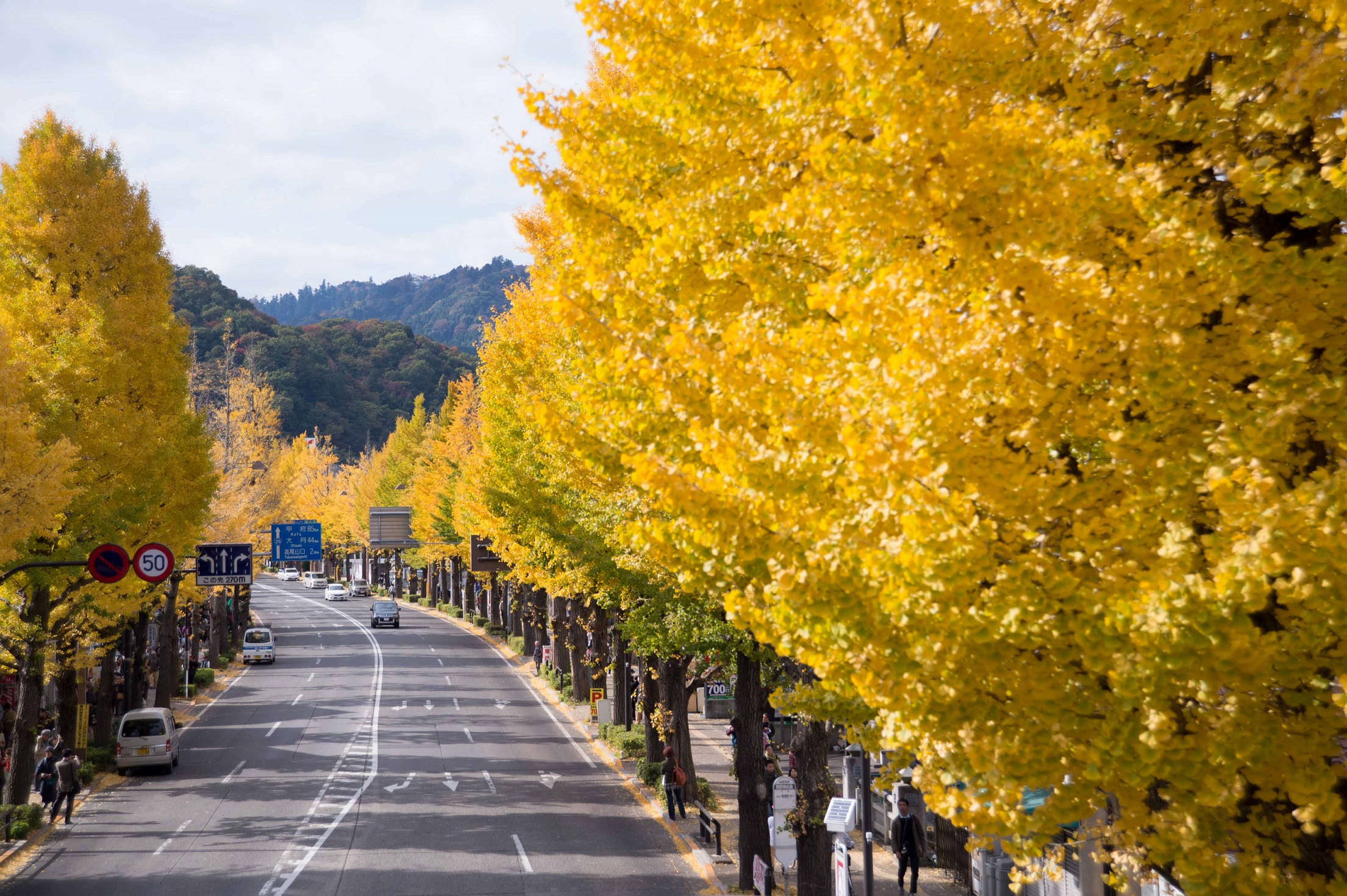 If you plan to visit Mt. Takao, a famous spot for autumn leaves in Hachioji, you may as well make a stopover at the Koshu Kaido Avenue 甲州街道 running between Takao Station and Nishi-Hachioji Station. This 4km stretch of road is lined with about 770 ginkgo trees which glow golden yellow in autumn. You may choose to walk along the avenue from Nishi-Hachioji Station to Takao Station (or the other way around) which takes about 50-60 minutes, or simply take a short stroll from either station just to marvel at the stunning scenery. 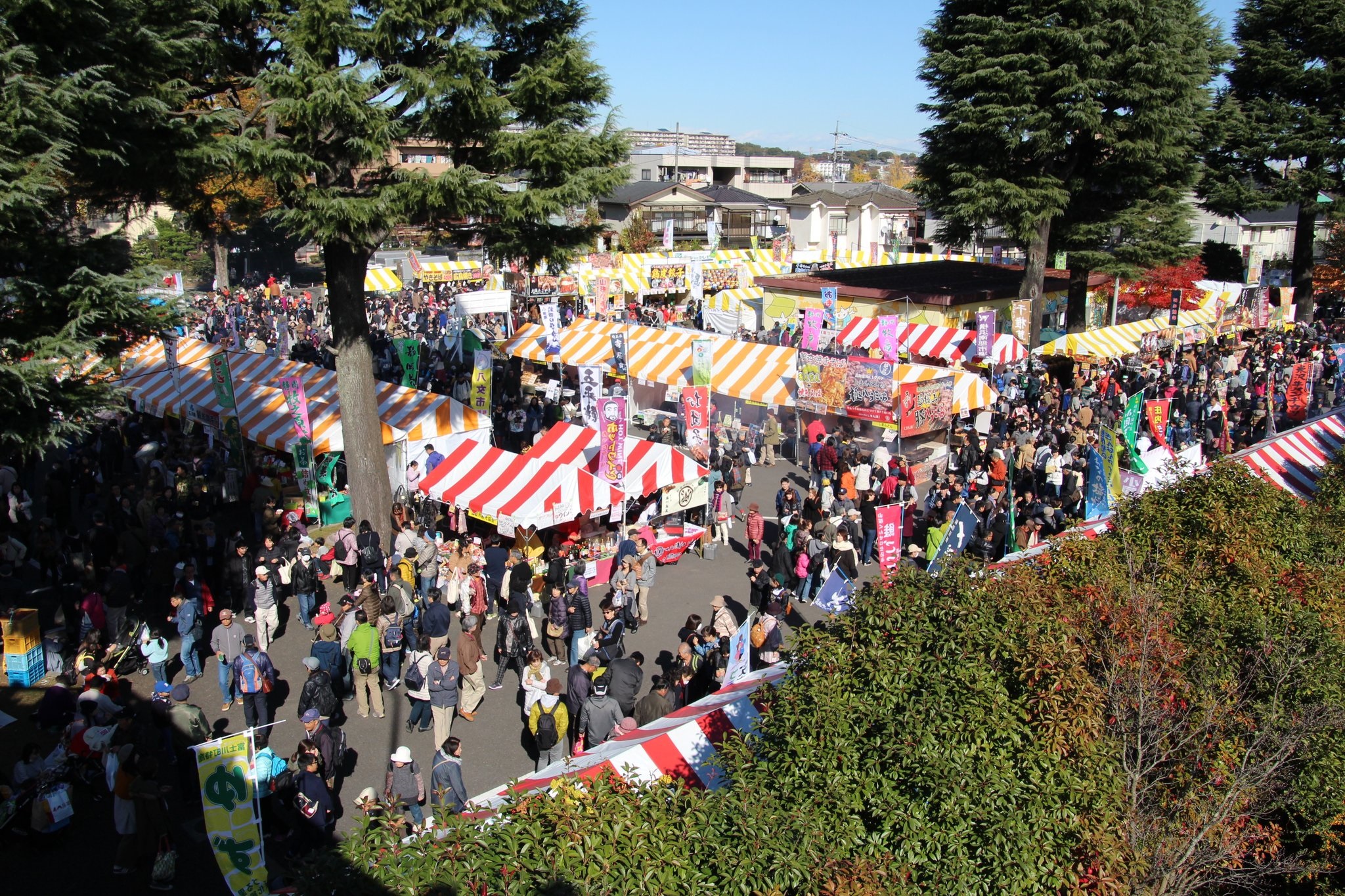 Each year, the Hachioji Ginkgo Festival 八王子いちょう祭り is held around the third weekend of November to celebrate the season. The festival features a variety of events including classic car parade, cultural performances, and food stalls.