7 Islands to Visit in The Saga Prefecture

Learn More About Japanese Currency and Their Payment Methods No ratings yet.

Seijin no Hi: Big Day for the 20-Year-Olds No ratings yet. 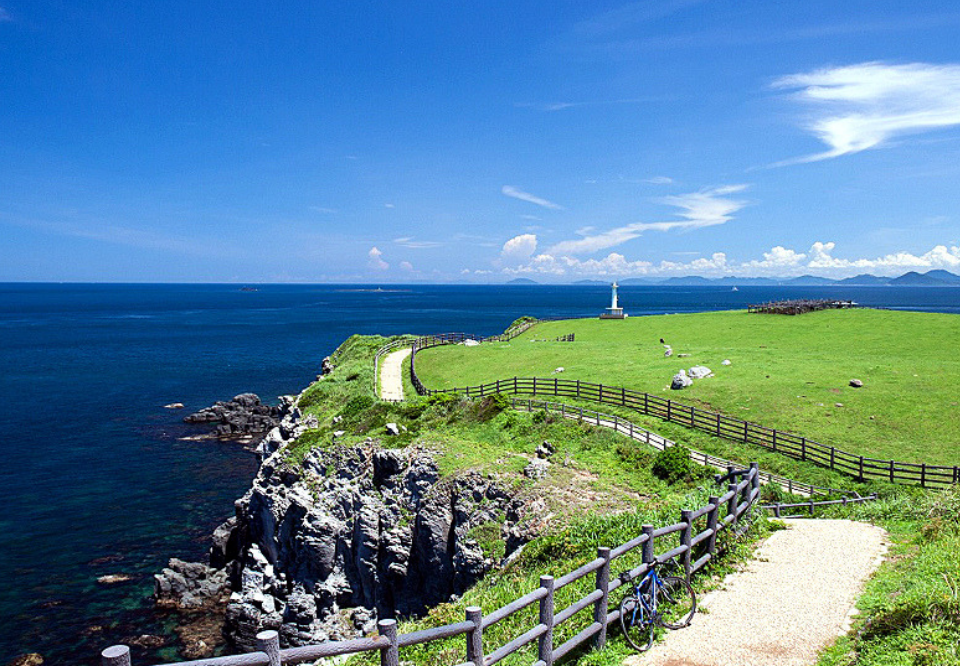 After getting off at Karatsu, you can easily move around by renting a car to explore this beautiful and natural side of Japan. From Karatsu, it is less than an hours drive to any part of the Saga Prefecture, and namely to the harbour towns, beautiful cliffs and scenic landscapes. All you need to do is drive on highway No.204 heading north, then making one loop and getting back on highway No.202.

To start your journey, the nearest island to Karatsu is Takashima Island, otherwise known as one of the cat islands of Japan, and then from there, you head north to other islands that go around the northern cape of Saga Prefecture. Some of the islands have villages, while others offer beautiful national parks that are all in the Genkai Sea of Japan.

This experience is purely for the adventurer, namely those who seek out nature, flora, fauna and the true Japanese culture. You are reminded that the locals here are not the same as found in Tokyo, Osaka or Sapporo, but are more friendly and rich with culture. 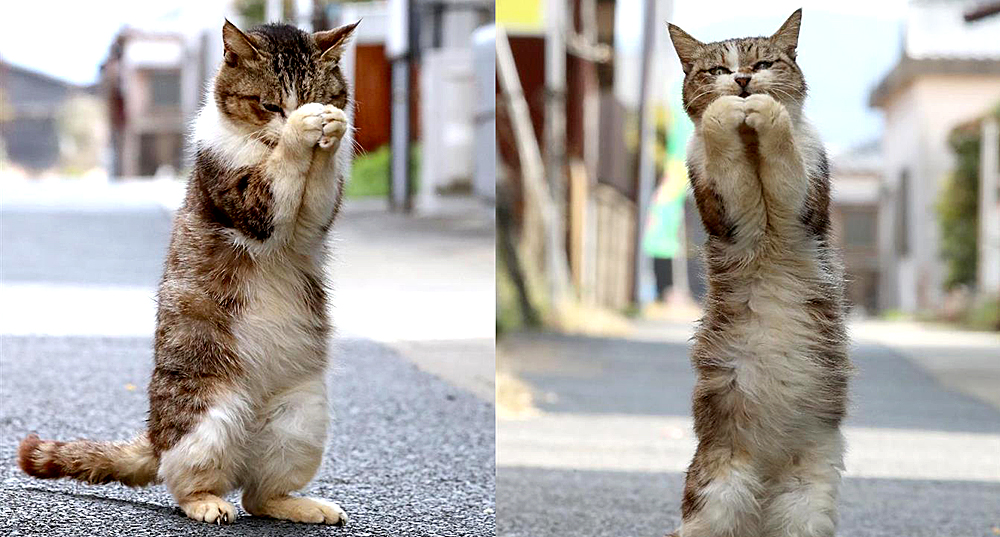 You may or may not have heard about this unique island which is home to a lot of cats and often called Cat Island. Yes, this is Takashima Island or Taka Island, which is very popular among the local Japanese tourist, and now slowly picking up interest from the foreign tourist.

On this unique island, you will find cats waiting for you as you arrive. A small community of about 300 people live on this island, and there is also a cat-themed shrine called Houtou Shrine here. Once you are on the island, just rent a bicycle and explore this place as there is a beach, an orange farm, a hiking trail to the top of the observatory point, some cafes, restaurants and souvenir shops.

This is more of a day trip location, so get in, and get out before the last boat leaves. There are no hotels or homestays here. Take note that during the Japanese lottery season, many locals will make their way to this island to pray at the Treasure Shrine or Hoto Shrine here. 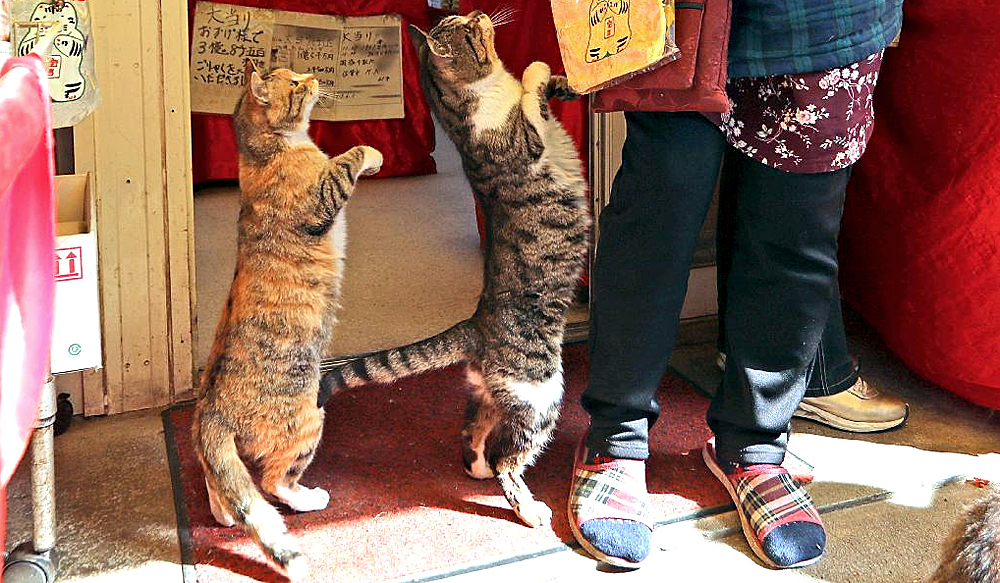 These local cats have been trained to stand and pray by the souvenir shop owner.

To get to Takashima Island, you need to walk south from the Karatsu Castle for about 10 minutes to the Takara Pier, which is a private run small jetty. You will pass the main castle car park, then cross a pedestrian bridge, till you see the Showa Bus Terminal. As you exit the bridge on your left, there is a small jetty with a signboard for boat trips to the island.

There are six boat departures daily and each boat takes up to 10 persons. Per person, the ticket is ¥420 for a return trip and paid as you board the boat to the island. During the lottery season, there is a special ocean taxi service that cost ¥500 per person one way. 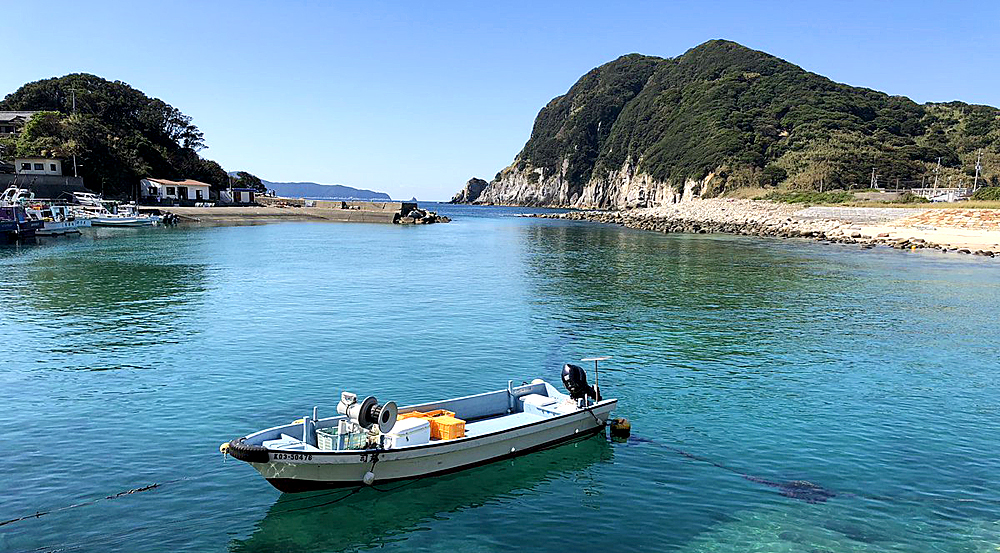 With a population of around 400 people, Kashiwa Island is easily accessible from the Minato Port by a local commuter ferry. The journey is only eight minutes one way, and the ferry runs a number of times a day.

Kashiwa Island is not touristy at all and is very local, where you can see daily Japanese islanders go about their chores of sorting out freshly caught fish, seaweed and shellfish. There are very small restaurants and cafes on the island, but do not expect much here.

The island is also not that huge but has a simple trekking point up to a viewpoint area which gives you an amazing 360 degrees view of the entire landscape here. If you are a scuba diver, Kashiwajima is a great place to do diving too. 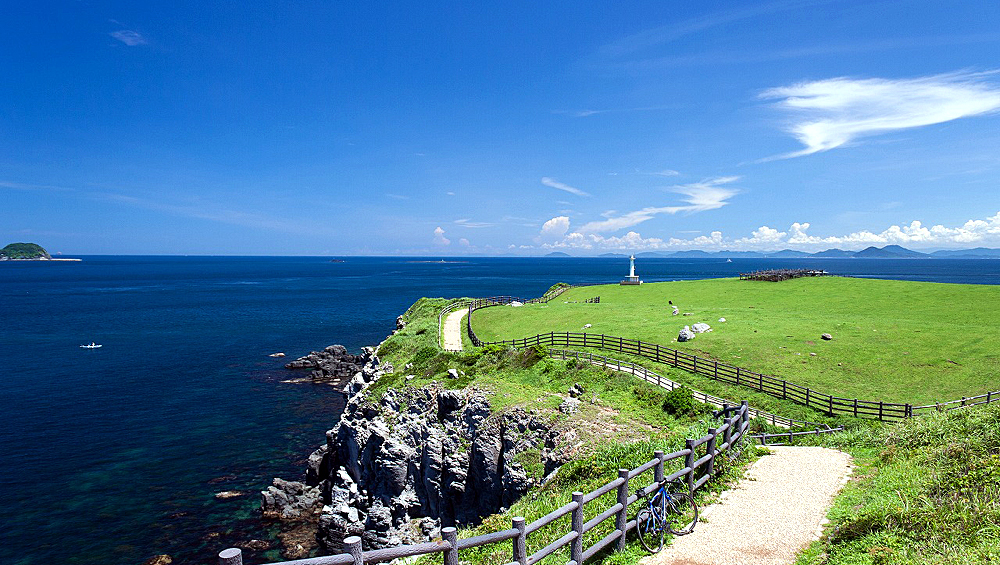 Travelling west from Kashiwa Island along the main 204 highway will lead you to the famous Yobuko Market. From here, just drive towards the Yobuko Ohashi bridge and cross it to Kabe Island. This island is connected to the cape and offers a couple of nature reserves, a local village and a lot of farm land.

Tendodake Park is a natural reserve which is great for hikers, while there is also a small place further up called Kazenomieruoka Park. But most locals come here to visit the Tajima Shrine, which is known to be the oldest shrine is the Hizen region here.

Some of the amazing seafood from the islands around Saga.

There are a number of beautiful spots for photography on Kabe Island, and one of them is known as the Suginohara Farm, where lush meadows overlook the Genkai Sea. This is also where you will find some high-grade Japanese cattle being bred.

Overall, the roads on the island are small, and you can just drive to all these spots. When you are in the village area, do look for the famed Yobuko Squid, which is where these exotic squids are caught by the local fishermen of Kabeshima or Kabejima Island. 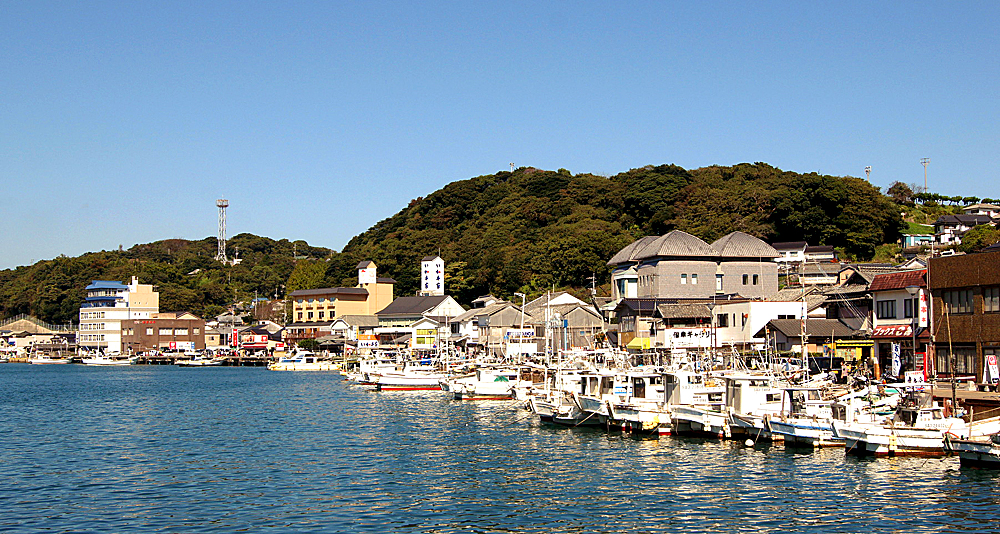 Getting To The Other Islands of Saga Prefecture

Once you reach Yobuko area in Karatsu, this is probably the best place for you make your base as there are four other islands that can be accessed from here. There are boat services to each of the islands from the Yobuko Marina or jetty area, which is near the morning market. Port of Yobuko is the other name this place is called.

This town also holds a 250-year history of whaling and deep sea fishing, which is quite interesting to learn how whaling is done. And if you are a lighthouse fan, each of the islands here has their own lighthouses, which are quite beautiful to photograph. 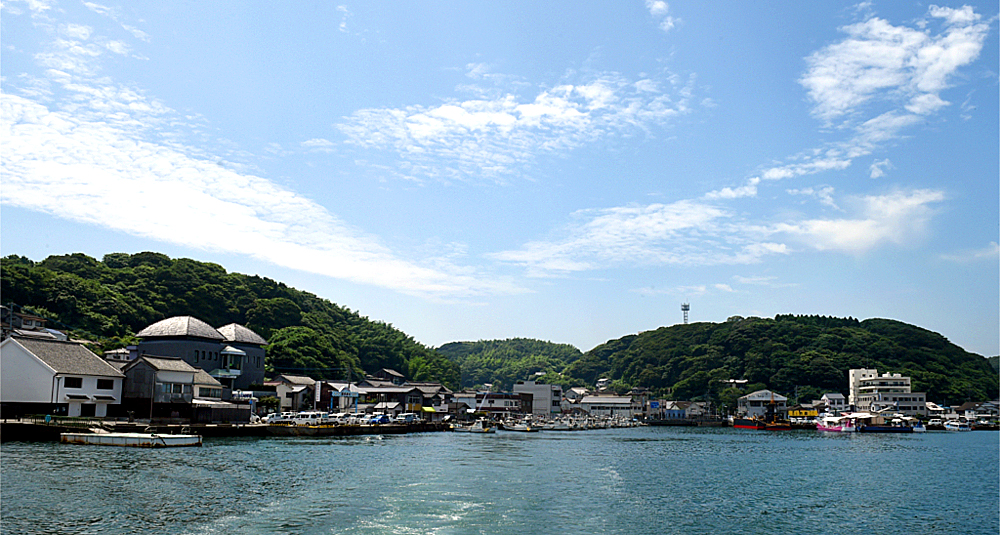 The rightmost island in the Genkai Sea, Ogawa Island in Saga is quite small and only has one small fishing village with a population of about 700 people. This island also has a long history of whaling until the 1950s.

But surprisingly, there are two bed and breakfast in the village just by the harbour that caters to mainly anglers. A small park called Kujira Park has a shrine and a walkway while most people come here to experience the natural island landscape.

A boat service from Yobuko Port called Soyokaze takes you to this island, and usually, anglers make their way here for some sea fishing. Boat fee is ¥510 one way per person and is paid when you board the boat. Service starts at 8.00 AM till 6.00 PM, and every three to four hours once. To book the boat service, you need to contact Kawaguchi Steaming Bureau Limited Company, Tel: 0955-82-8025.

The largest of the many islands here, Kakara Island has slightly over 100 residents staying here. It also takes only 15 minutes by boat from Yobuko Port and is highly popular among anglers. The locals here only do fishing at their jobs in this island that is only 2.8 kilometres long from top to bottom.

For those planning to explore on foot here, there are some beautiful cliffs in the north, east and west of the island, while for any bird watchers, you can find the Japanese Yellow Bunting bird, which is highly sought by many bird watchers.

For those planning to spend a night, Kakara Island has only one bed and breakfast called Yusuge, located in the eastern part of town. In the village area, you can find a Japanese shrine called Yasaka Shrine and also a very small Buddhist Temple on a hill. 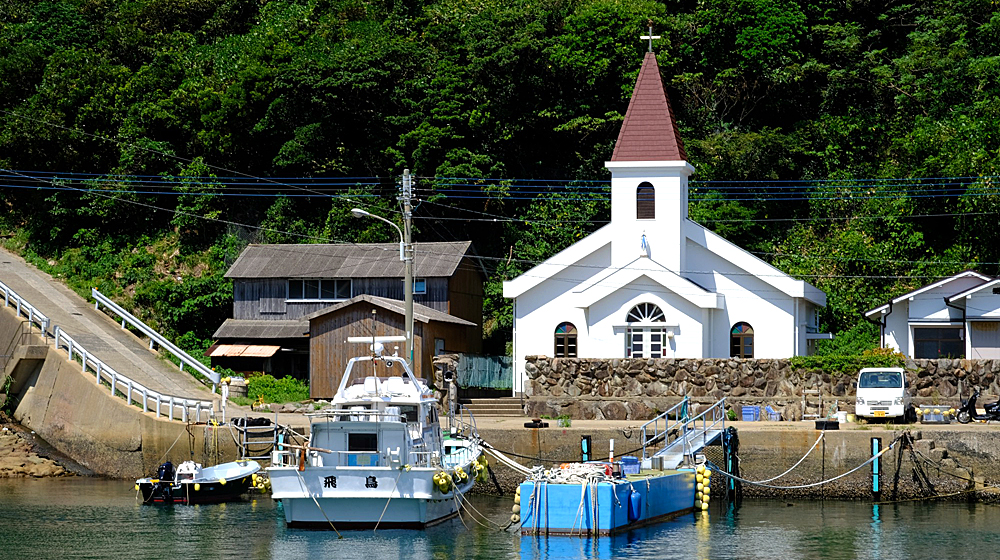 The Church at Matsu island. Photo by Ken.

This is the smallest island in the entire group here and has a population of about 100 people only. There is a special boat service called ‘Shinei’, which you can catch from the Yobuko Port area. This boat service is three times daily.

The beauty about visiting Matsu Island or Matsushima is the journey here, as you will pass the Yobuko Obashi Bridge and also the port area, which is great for photographs. 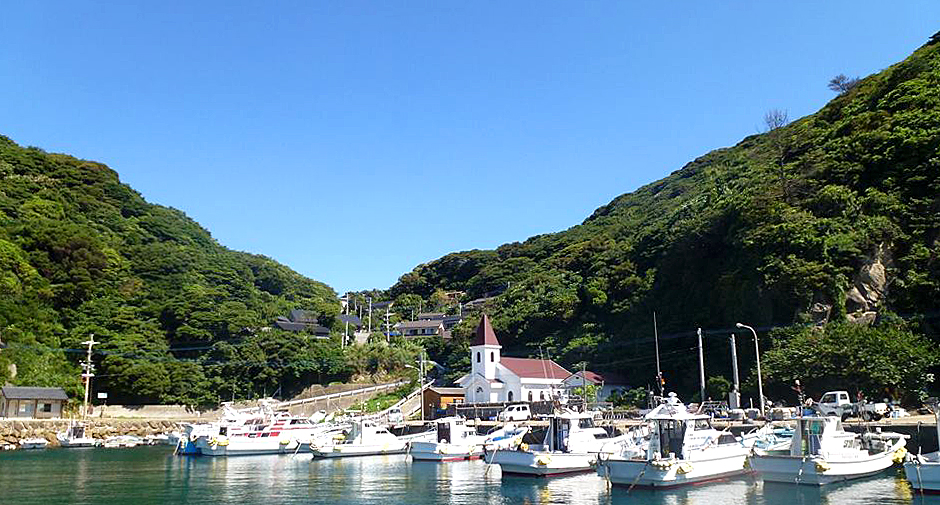 Another view of the harbour when you arrive at the island.

Upon arriving at Matsu Island, the first thing that greets you is a beautiful church. And you will wonder why, but history states that during the Edo period, the Christian missionaries and followers hid here to avoid being caught. The island is also known by its Christian name of Rosario Island. 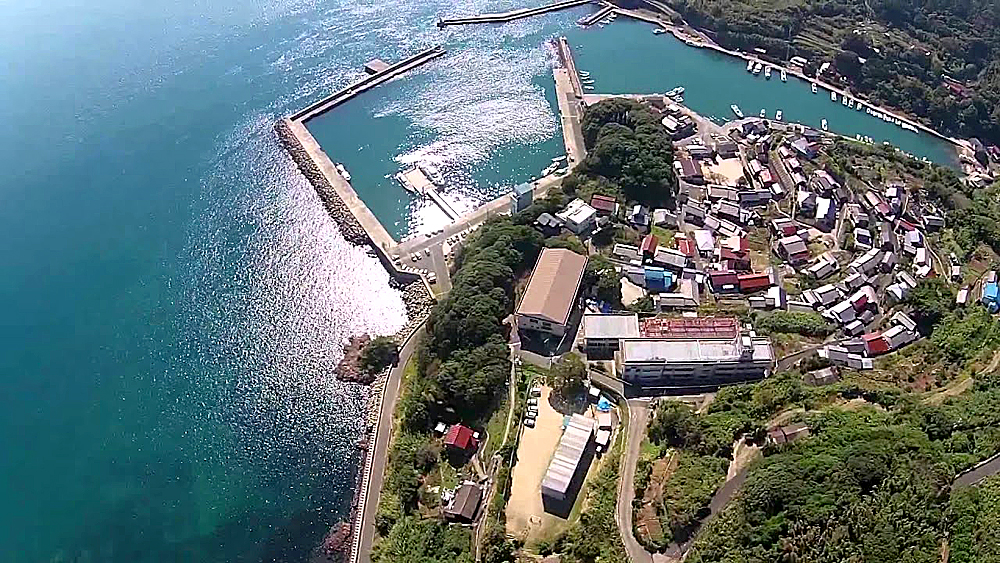 The furthest island in the Genkai Sea is Madara Island and is home to four villages which consist of one Catholic village and three Buddhist villages with a population of about 700 people. A Church of St. Bernard is the only wooden church which is built in 1928 and is also said to be the oldest church in Japan.

However, very little is known about this island except that many anglers come here for the great fishing, trekking, hiking and photography. The island name is Madara Island, but over time, there have been many names this place has been called, and one of them is Magadorijima.

To get here, you need to take the Victory passenger boat from Yobuko Port, and the boat operates four times a day. Price is ¥860 one way, and you need to contact Yumosumaru limited company, Phone number: 0955-82-9008.