6 Beautiful Spring Flowers Besides Sakura That Are Worth Travelling For

How to Enjoy Hanami & 5 Best Spots in Japan No ratings yet.

Go for a shopping spree at Osu Shopping District in Nagoya! No ratings yet. 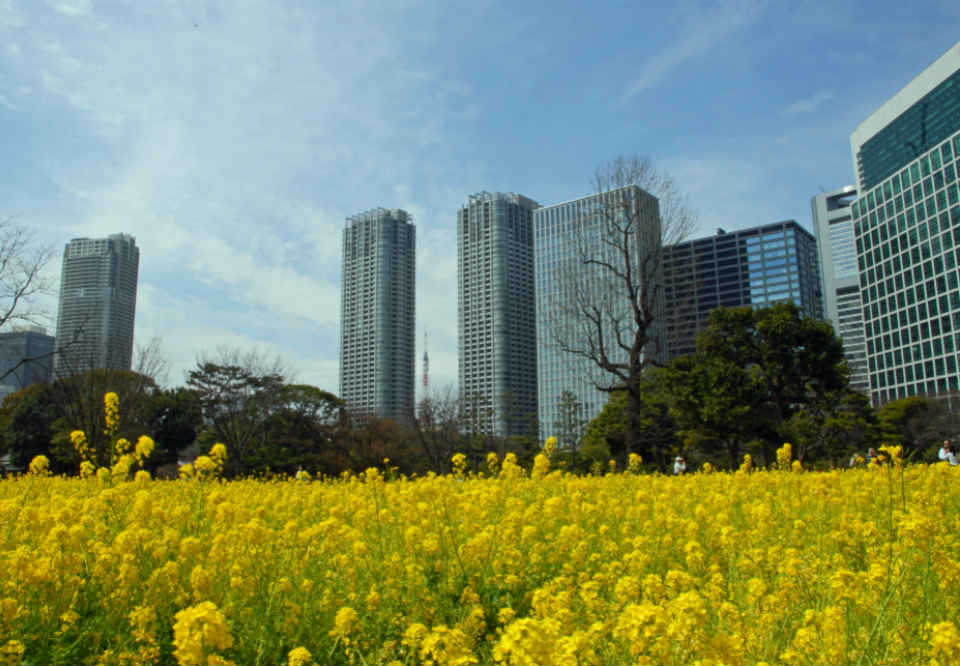 6 Beautiful Spring Flowers Besides Sakura That Are Worth Travelling For
No ratings yet.
Tags: destinations • flowers • gunma • ibaraki • kanto • saitama • tochigi • tokyo •

The breathtaking spectacle of sakura in full bloom is the main reason many visitors come to Japan in spring. Even so, sakura’s peak season is short and the timing is always uncertain, it is not unusual to see visitors feeling disappointed after arriving at some famous hanami spots only to discover that they are either too early or too late for the full bloom.

With the nature putting out one of its most splendid displays in Japan during spring, sakura is not the only flower that visitors can look forward to seeing when visiting the country during this season. Check out these 6 spring flowers as well as the parks or festivals to catch the blossoms that are just a short trip away from Tokyo. 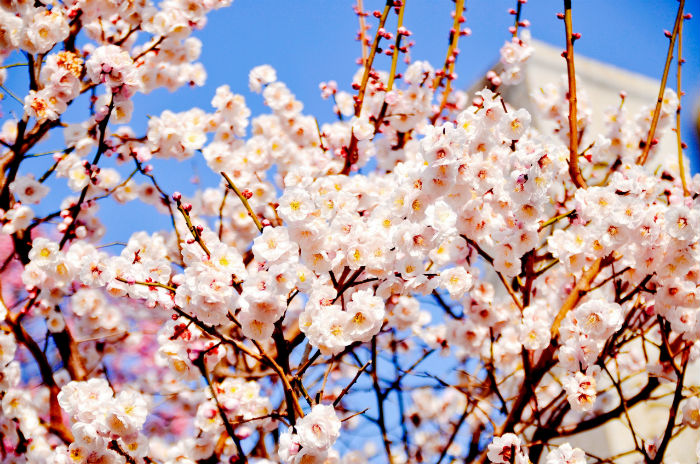 Before most other flowers bloom, the ume or plum blossoms will grace the land from mid-February to March. Plum blossoms are the real first sign of spring, born out of the wintry cold to remind everyone that the winter is about to end and the spring is coming.

Before sakura viewing has become a tradition of the spring, the word hanami was originally used to refer to plum blossom viewing. Plum trees are planted everywhere in Japan and can be found easily around shrines and temples, public parks, and former gardens of the nobility. 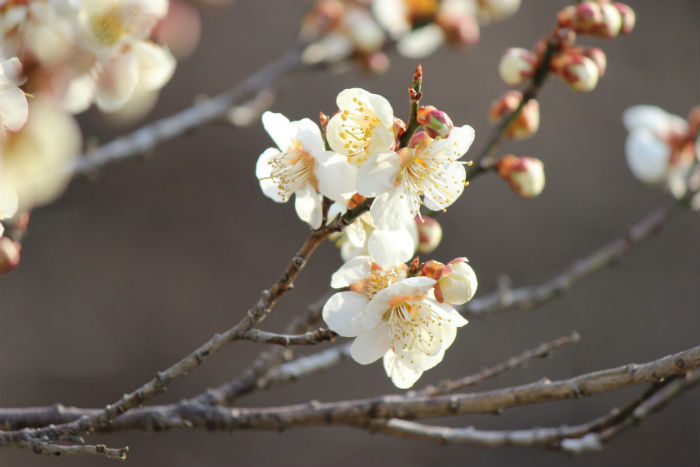 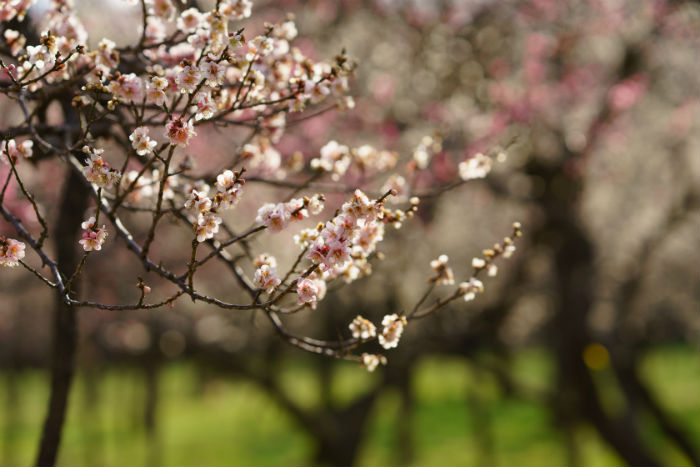 The festival is held at Kairakuen 偕楽園 in Mito city of Ibaraki prefecture, a Japanese garden known particularly for its 3,000 plum trees that look stunning when in full bloom. Lasts from mid-February to late March, various events are featured during the festival period, including evening illumination, plum wine (umeshu) fair, tea ceremony, and cultural performances. 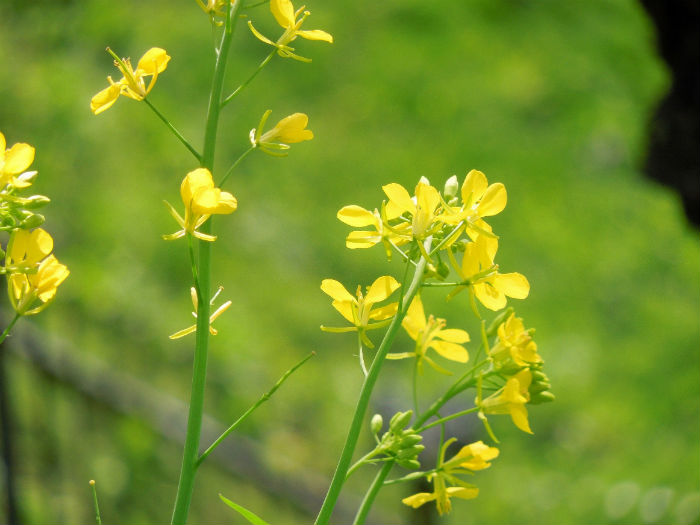 Nanohana (canola or rape flower) is another symbol of spring. They bloom in March before the cherry blossom season, though it is not uncommon to see them bloom alongside the late-blooming ume or early blooming sakura which gives a beautiful contrast of yellow and pink.

Rape plants are commonly seen in Japan’s countryside, from riverbanks to paddy fields, roadsides to farm fields. Besides being used in producing oil, they have also long been consumed in Japan as a spring vegetable. The vivid image of yellow and green nanohana against the blue sky is spring scenery to behold and would make a refreshing change to the overwhelming pink of blooming sakura.

Where to see: Hamarikyu Garden 浜離宮 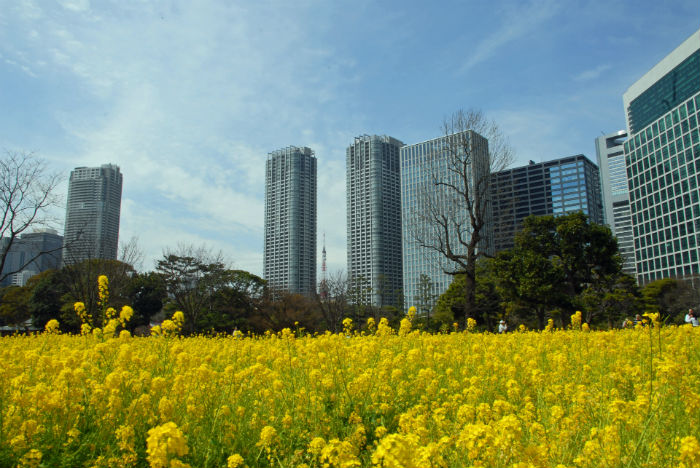 The attractive Hamarikyu Garden in the heart of Tokyo is a popular place to catch the sea of vibrant yellow of nanohana as it comes to full bloom around mid-March. The view is quite spectacular in its own right but what makes this Japanese-style garden special is that it is surrounded by stylish, modern skyscrapers of the Shiodome district thus giving a nice contrast to the carpet of 300,000 nanohana in the garden. 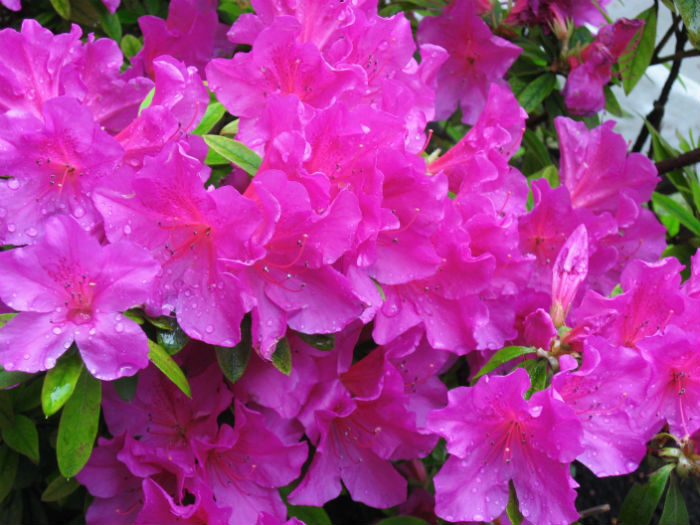 After the season of the pastel pink sakura, it is time for the intense-coloured tsutsuji or azalea to appear to greet its spectators. Azalea comes in many varieties and colours and is commonly planted in the parks, neighbourhood gardens, and sidewalks throughout Japan. Visitors can look forward to taking part in azalea festivals which are held in all over the country to celebrate the season of the well-loved flower, usually from April through May. 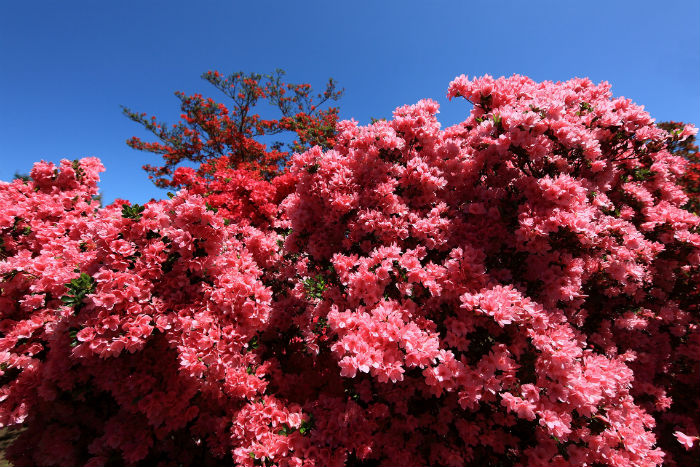 The festival takes place at the Tsutsujigaoka Park つつじが岡公園 in Tatebayashi city, Gunma prefecture from mid-April to early May every year. The festival begins when the 10,000 azalea trees including the colony of old azalea trees age over 800 years bloom beautifully in the park. Azalea has long been grown in the area, a tradition started off by the local daimyos hundreds of years ago. The park remains as one of the famous spots for azalea viewing in the Kanto region. 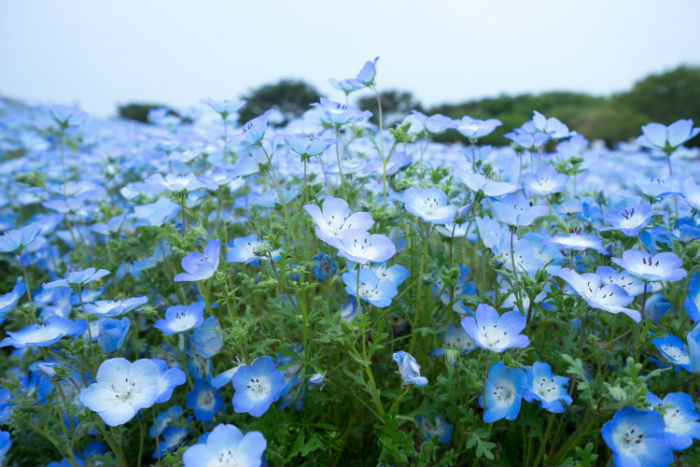 The cute blue and white nemophila (commonly known as baby blue eyes) might be a kind of plant native to North America, but it is also a flower you can see in Japan during the spring months of April and May. The delicate sky blue colour of the flower is not only rare but also soothing and comfortable to look at. 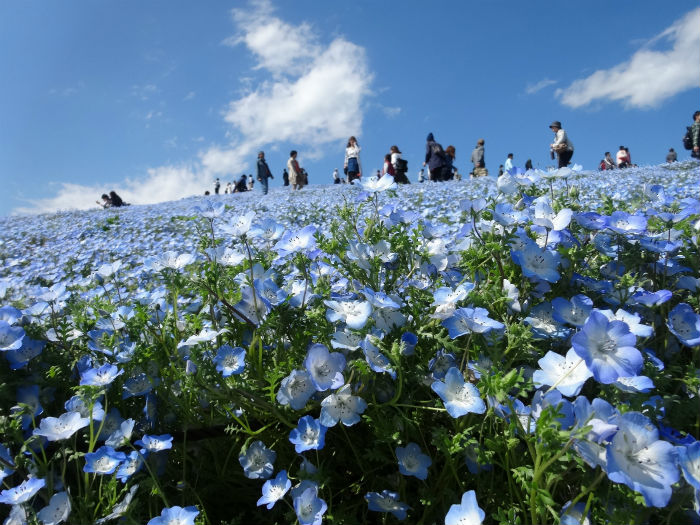 The famous public park hosts many flower events throughout the year. From late April to mid-May, the rolling hills of the Miharashi no Oka in the park are turned into a sea of blue that seems to be blending with the blue sky. This one of a kind breathtaking scenery is created by 4.5 million baby blue eyes that bloom all at once to the lovely sight that is known as the “Nemophila Harmony”. The harmony of the sky and the flowers looks the best on a clear sunny day. 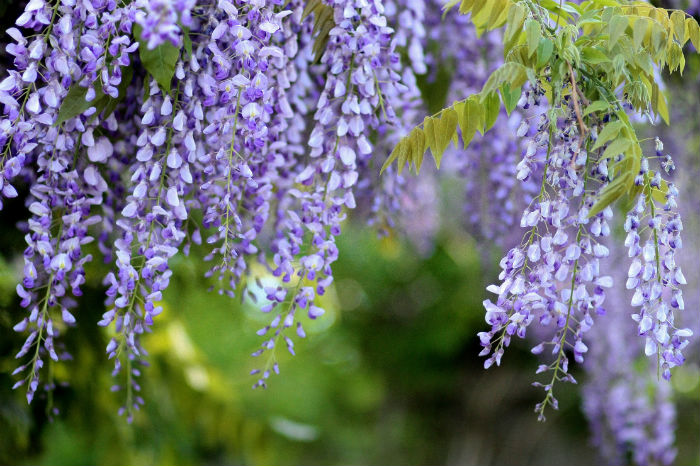 The graceful and fragrant fuji or wisteria is a magnificent blossom worth checking out when visiting Japan in spring. It is yet another flower that blooms after the sakura season, whereby bunches of flowers are seen growing out from the drooping vines of wisteria trees from mid-April onwards. Wisteria comes in many colours and varieties, with the more common variant comes in the lovely lavender purple colour. 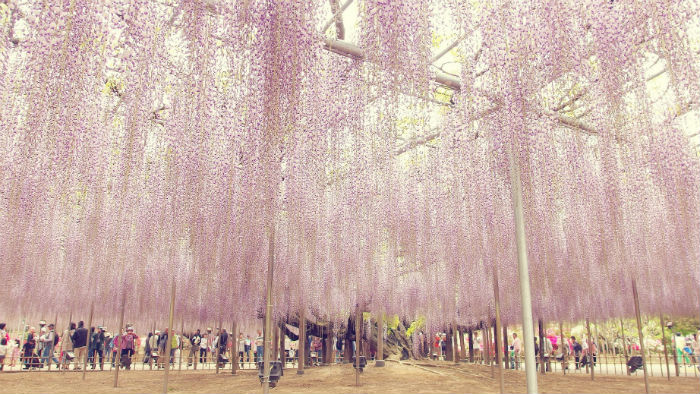 The Great Wisteria Festival at the Ashikaga Flower Park in Ashikaga city, Tochigi prefecture is one of the most popular flower events in Japan. It features more than 350 wisteria trees of different colours – pale red, purple, white and yellow – that bloom at different times, one after another from April to May. The main attractions at the festival include wisteria tunnels, evening illumination, and the 150-year-old Great Wisteria that spreads over an area of 1,000 square metres and looks absolutely stunning when in full bloom. 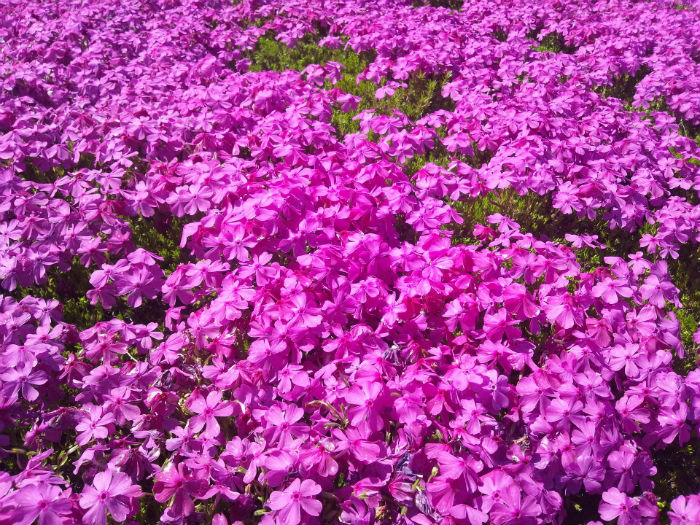 Also known as moss phlox or pink moss, shibazakura is another flower that covers the ground like a carpet. It comes in the shades of pink, red, white, purple, and some even have striped petals. It is called shibazakura (means “lawn cherry”) due to its resemblance to cherry blossoms but spreading over the ground like a lawn. The little blossoms of shibazakura are known to be dyeing the ground with their dazzling colours when they bloom, usually around mid-April to late May. 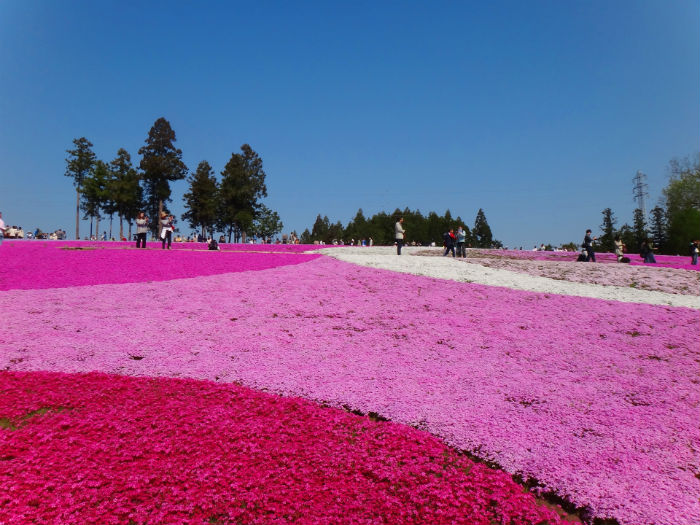 The Fuji Shibazakura Festival in Yamanashi prefecture is by all means the most famous event for shibazakura – the spectacular carpet of 800,000 shibazakura plus the iconic Mt. Fuji as backdrop on clear days. But for travellers who are tight on time and budget, the Hitsujiyama Park in the Chichibu city of Saitama prefecture is no less a good option. The spacious, carefully landscaped park has Mt. Buko in the background, and features more than 400,000 shibazakura that bloom from mid-April to early May.

Spring in Japan is beautiful as flowers bloom and add colours to the land after the long cold winter. There are various flower festivals held across the country to allow visitors to marvel at these exquisite blossoms, so if you are planning on visiting Japan in spring, consider to include one of them in your itinerary!

But do note that these flower festivals are very popular. If possible, avoid visiting around the Golden Week (April 29 to May 5) which is the peak travel season in Japan. Also, remember to check out the respective flower’s peak season beforehand to ensure best flora viewing experience!