Souvenirs To Buy From Hokkaido No ratings yet.

Places To Experience Autumn in Tokyo and Osaka No ratings yet. 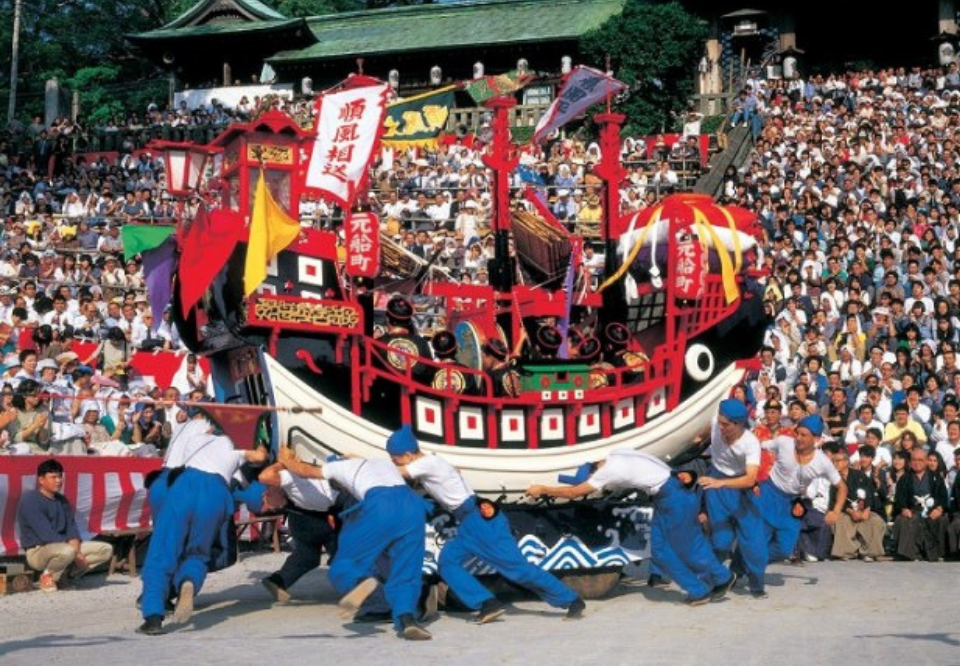 After surviving the hot scorching summer, we’re all looking forward to the chilly autumn in October and some of Japanese popular festivals. From floating shrines to drums competition, locals and tourists need to see this other side of Japan. Here are our top picks for 5 October festivals you don’t want to miss!

Every 4th to 6th October, Nihonmatsu, Fukushima will celebrate one of the top lantern festivals in Japan called the Nihonmatsu Lantern Festival. The festival began 300 years ago by the lord of Nihonmatsu Castle. He created this festival for people to attend and experience the holy ceremony regardless of their status. 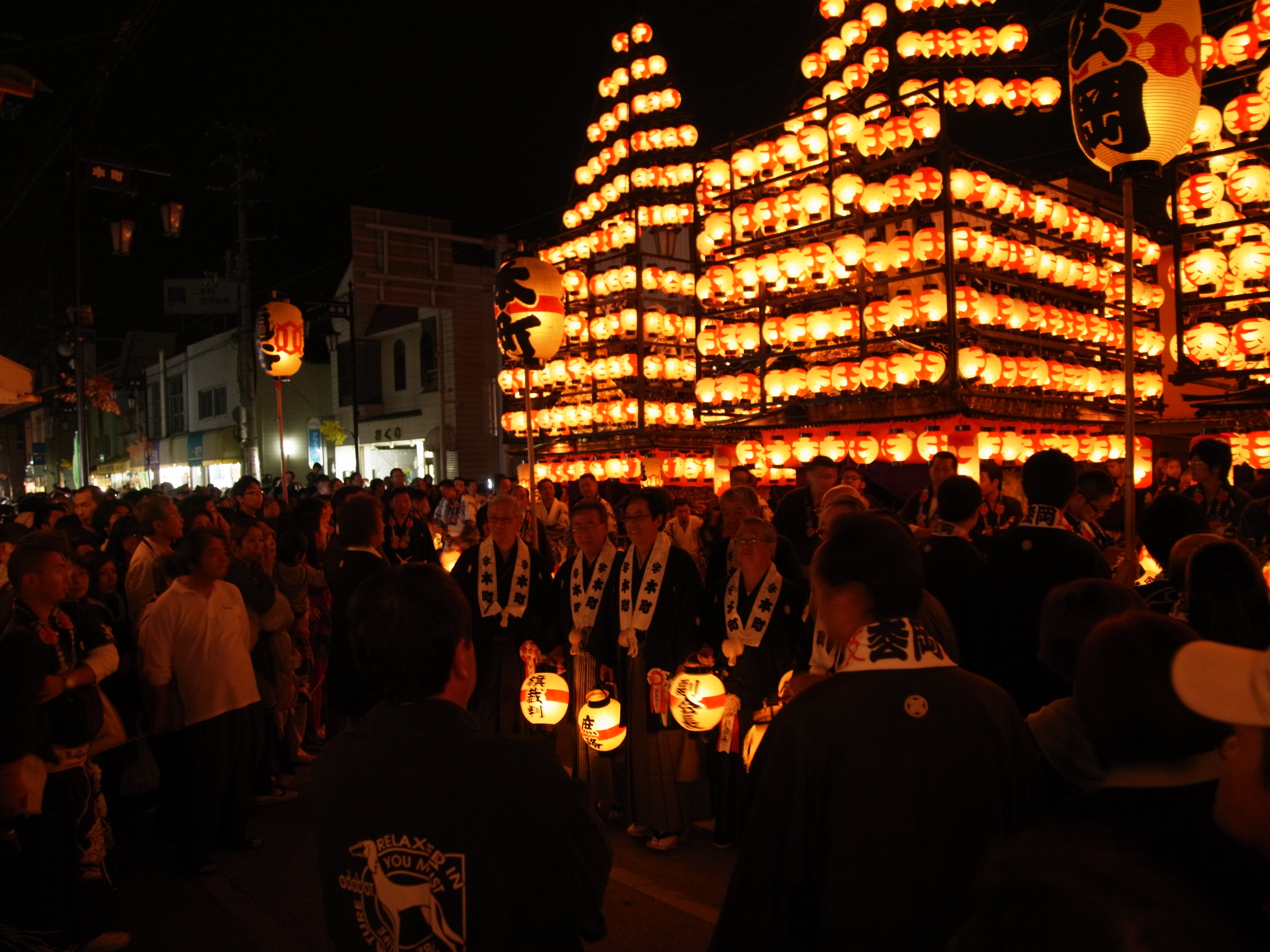 The festival will start around 5:00 PM when priests will firstly give blessings and prayers at local shrines. Next, they will light up thousands of lanterns on seven floats to initiate the festival. The seven floats are from each neighborhood in the area. As the sun goes down, the locals will put on the traditional attire and pull the floats along the streets of Nihonmatsu. 64,000 people will attend the festival annually, therefore come early to get the best view.

The parade will be accompanied by the sound of Taiko drums and chants from the locals. Interestingly, each float has their own rhythms and music to distinguish them from one another. Witnessing the beautiful lanterns floating above the seas of people is utterly astonishing. If you’re tired from all the chanting, there are a few food stalls for you to fill your tummy. 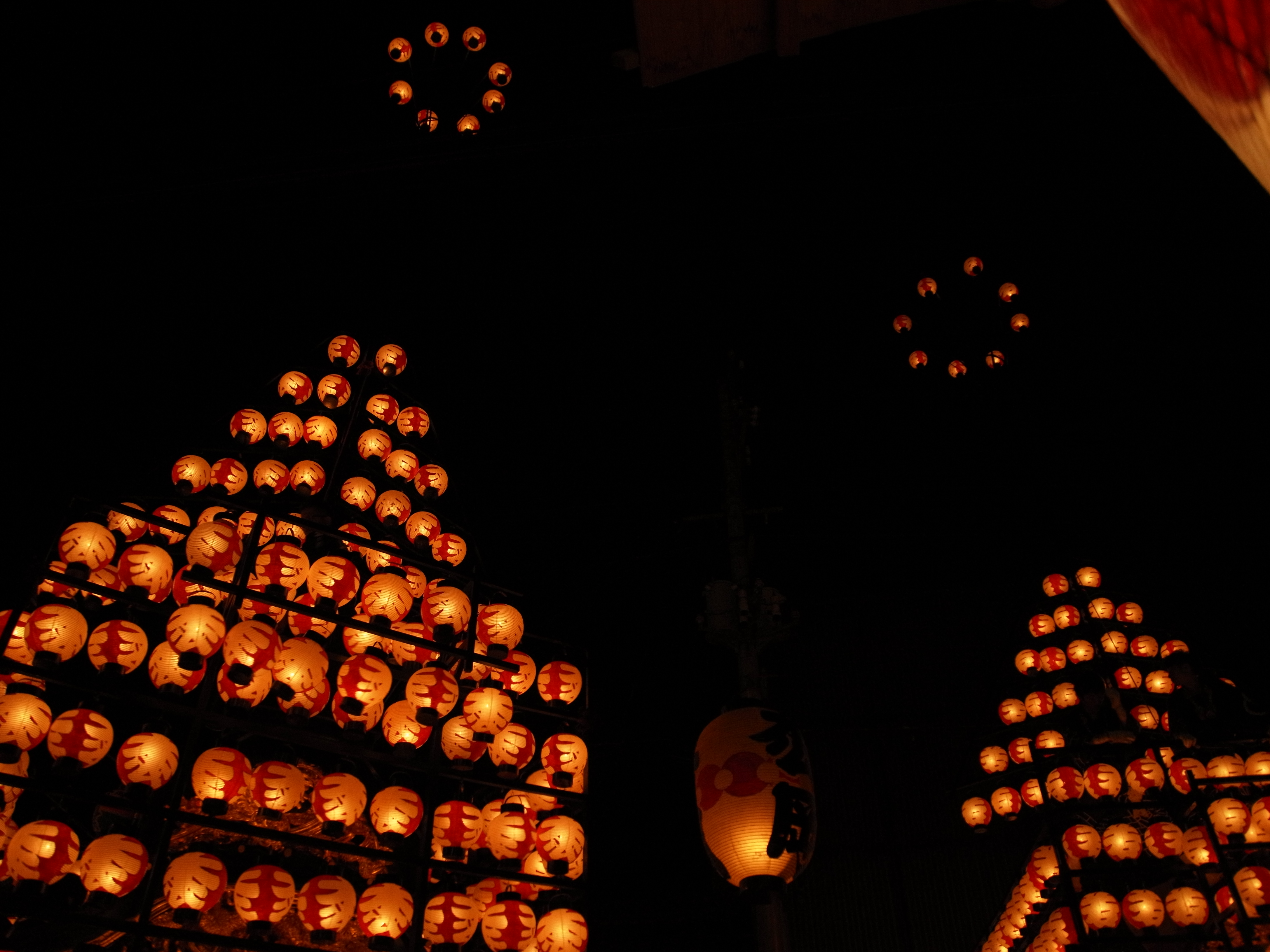 On the last day of the festival, all seven floats will split into two groups of four floats and three floats. They will make their way up to the Nihonmatsu Castle to close the festival.

Registered on UNESCO Intangible Cultural Heritage list since December 2016, Takayama Matsuri Autumn Festival existed for more than 300 years in Takayama, Gifu. The festival is held on 9th and 10th October annually at Shimomachi Hachiman Shrine. It is also listed as one of Japan’s beautiful festivals. The objective of this festival is to welcome a good harvest in autumn.

Takayama Matsuri Autumn Festival starts on the early morning of 9th October. The floats you’ll see throughout the parade are called yatai. Each yatai is decorated with delicate designs with excellent craftsmanship. One of the floats will put a marionette or mechanical puppet to perform for the crowds. 11 floats will be positioned accordingly before it was brought to march the streets. 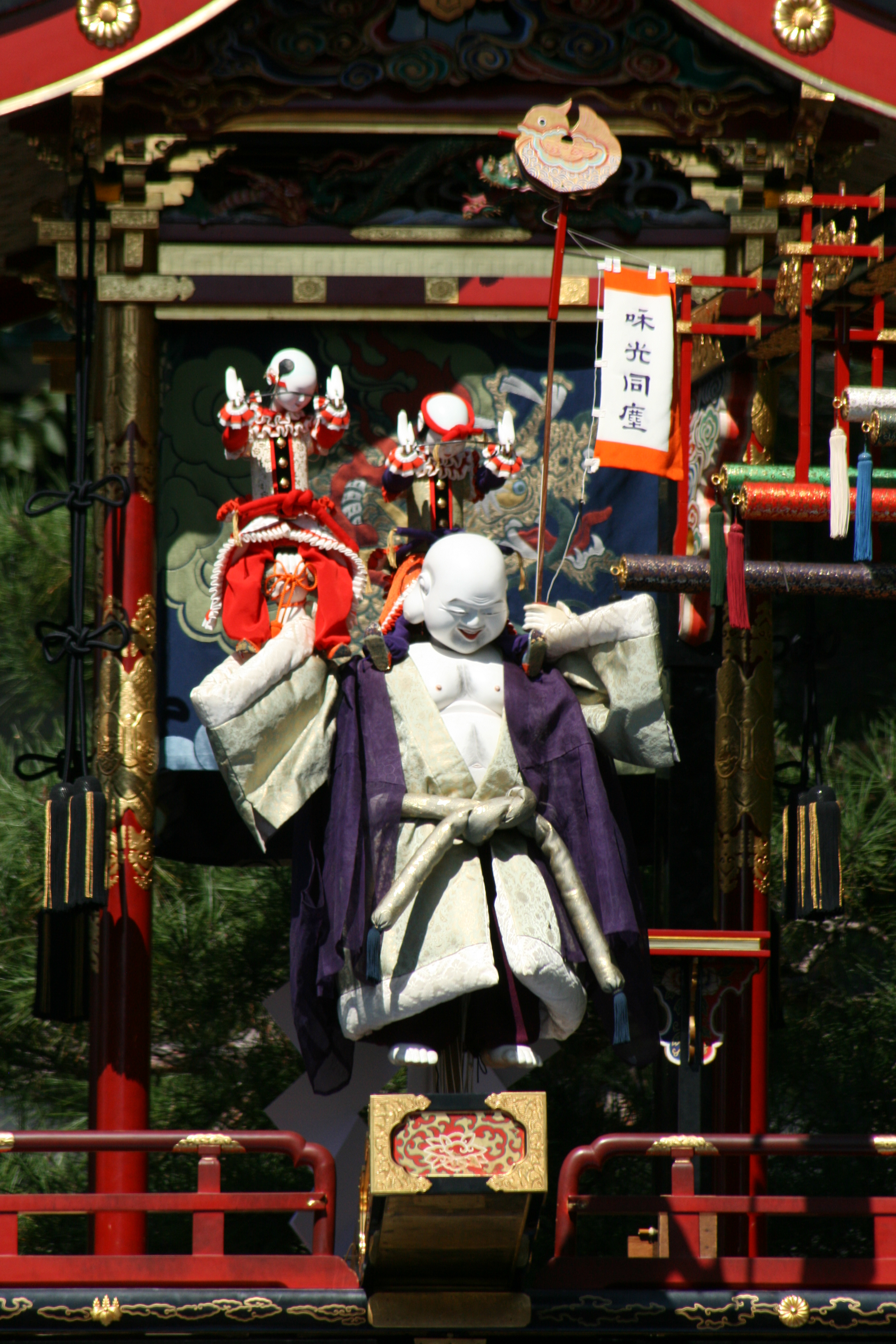 Image source: Katy on Flickr/CC BY 2.0

At night, hundreds of lanterns will be placed on all of the 11 floats to illuminate the streets of Takayama. Sometimes the festival might get cancelled due to poor weather. Therefore, all decorated floats will be taken to a closed space to put as displays.

Since 1634, Nagasaki has held Kunchi Festival at Suwa Shrine every 7th October. The festival incorporates both Chinese and Dutch cultures as they were a part of Nagasaki’s history. Nagasaki used to be the center of international trade in Japan and had several diplomatic relations with countries like China and the Netherlands. Now you know why Nagasaki is heavily influenced by these two cultures. 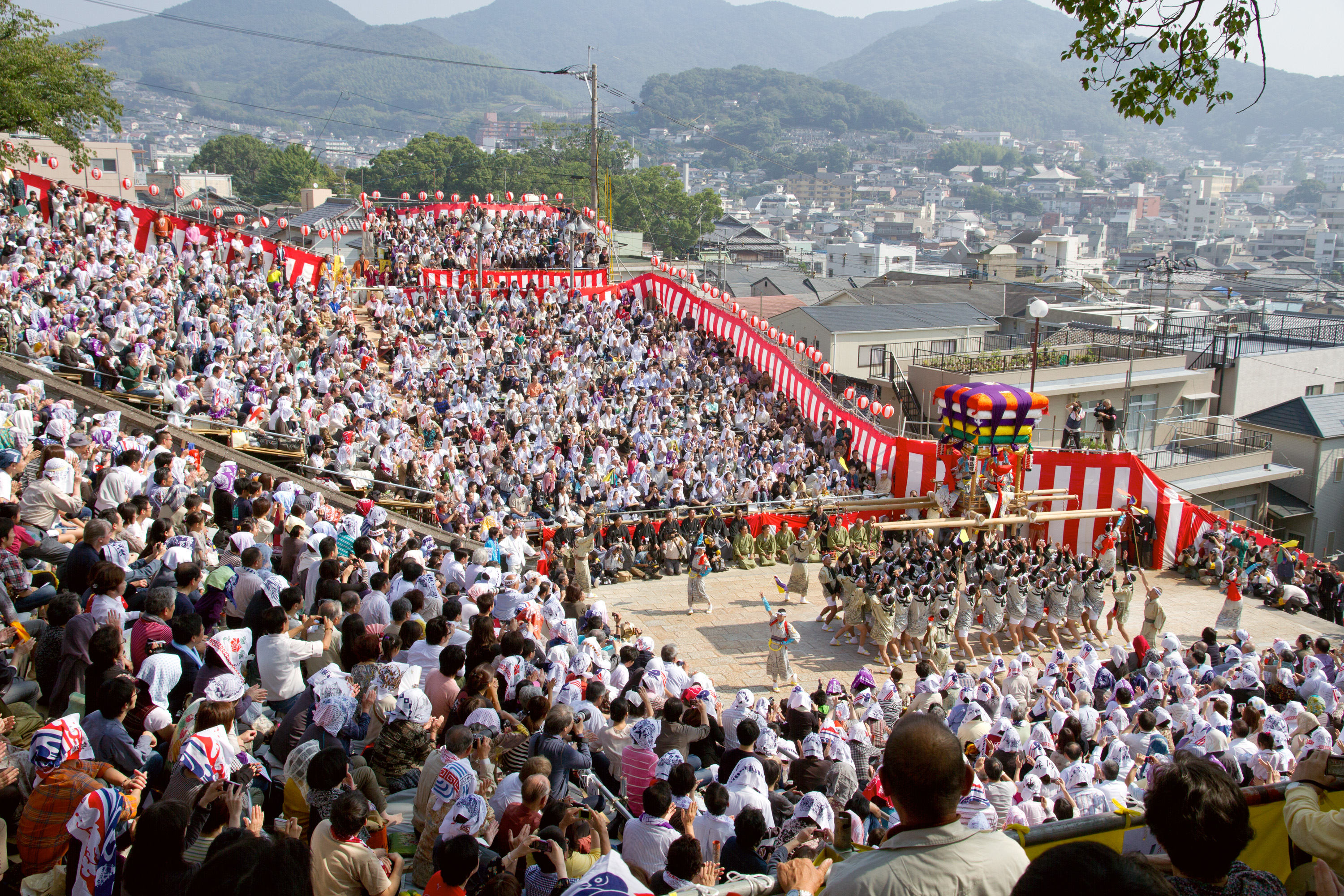 The festival is held at four venues, starting at Suwa Shrine, Otabijo, Yasaka Shrine, and Nagasaki Kokaidomae Plaza. On the first day, the festival will begin as early as 7 AM. To get the best view, you need to book the seats by June or August. Otherwise, just watch the performances when they tour the city. The floats will also pay a visit to shops and neighbourhoods to give performances. 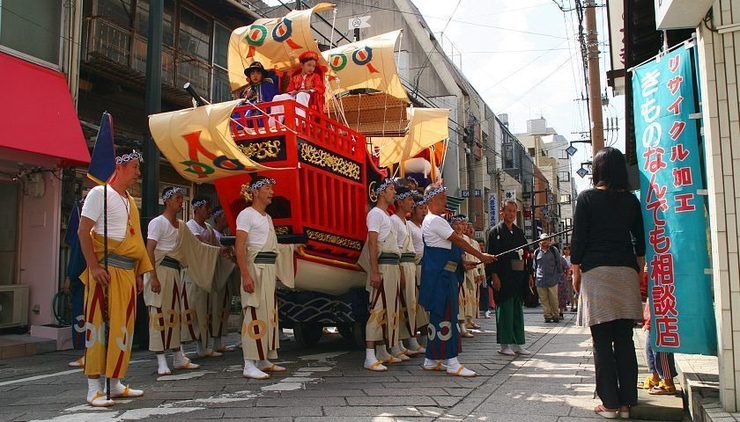 Once a year, only eight or nine neighborhoods get to perform their dance. Then, they need to wait seven years for their turn as there are more than 50 neighborhoods in Nagasaki. Among the performances you’ll see are the dragon dance called Jaoidori, Japanese traditional dances, and also performances by large floats. 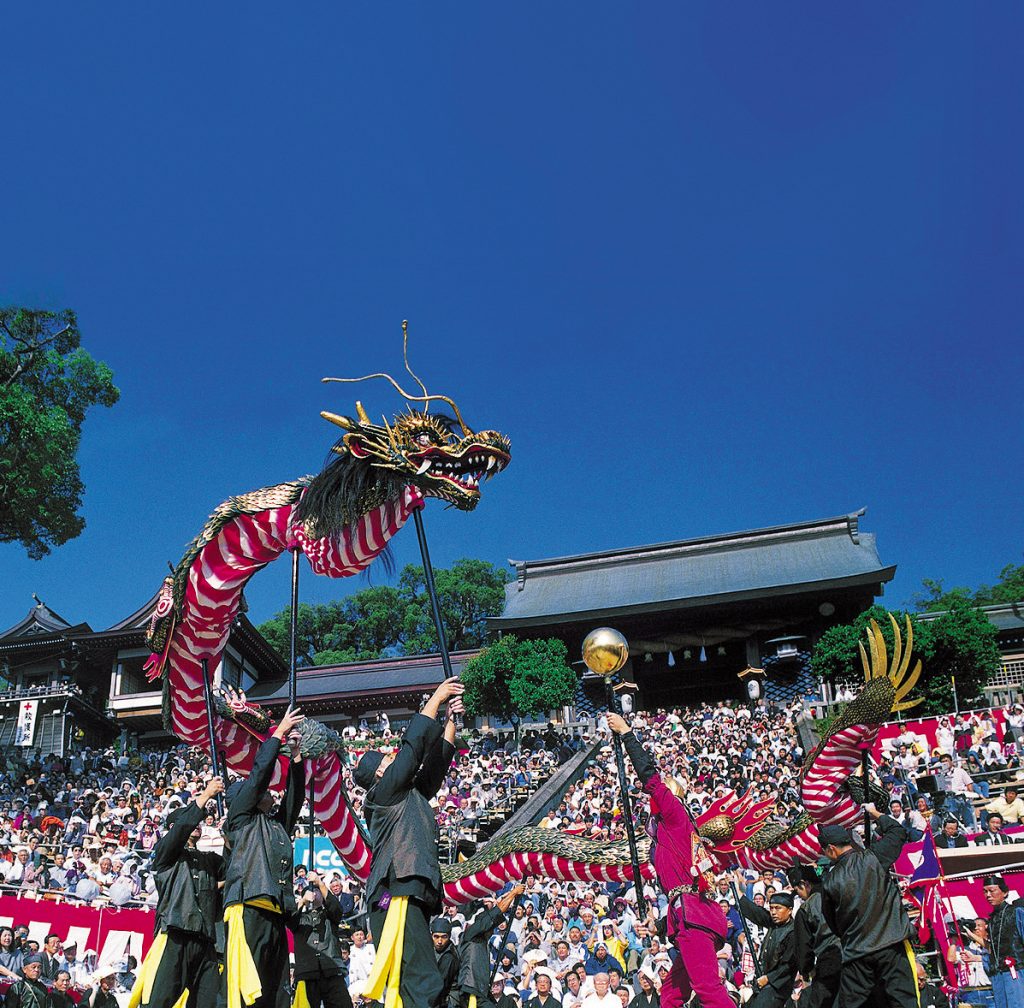 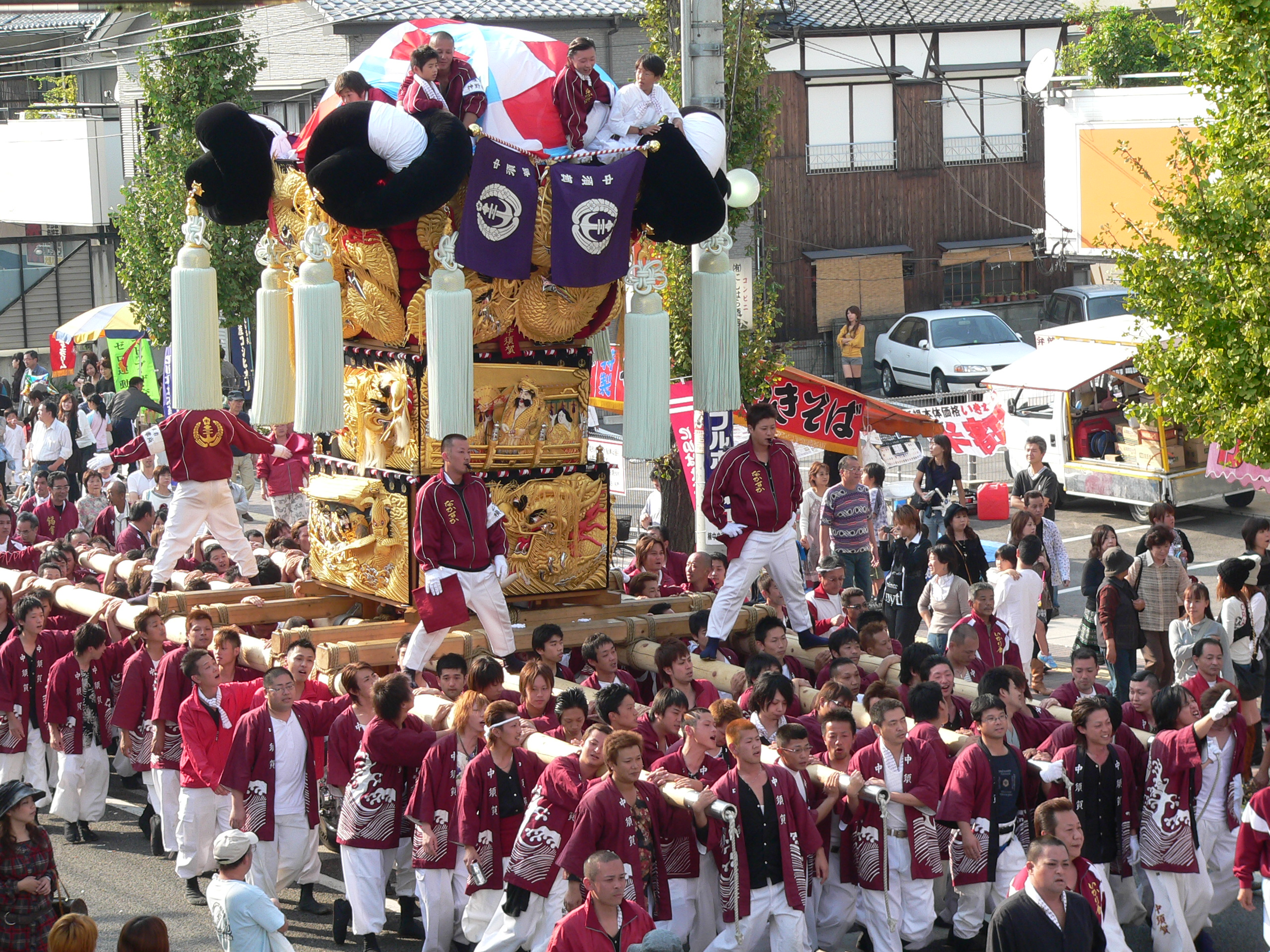 Celebrated annually on the 16th October, this loud banging festival is held at Niihama, Ehime Prefecture. As you know, taiko is the Japanese term for drums. Another name for Niihama Taiko Festival is Otoko Matsuri (Men Festival). Why? Because men (kakifu) will be carrying the floats (taiko-dai) to the main locations for the big show.

The purpose of this festival is to show off their skills and strength as they carry the 3-tons drum floats and to determine which neighborhood has the most enthusiasm. The crowds will chant together with the men following the beat of the drums. Other than that, these men will bust their butts off during this festival to win the best floats carrying style. 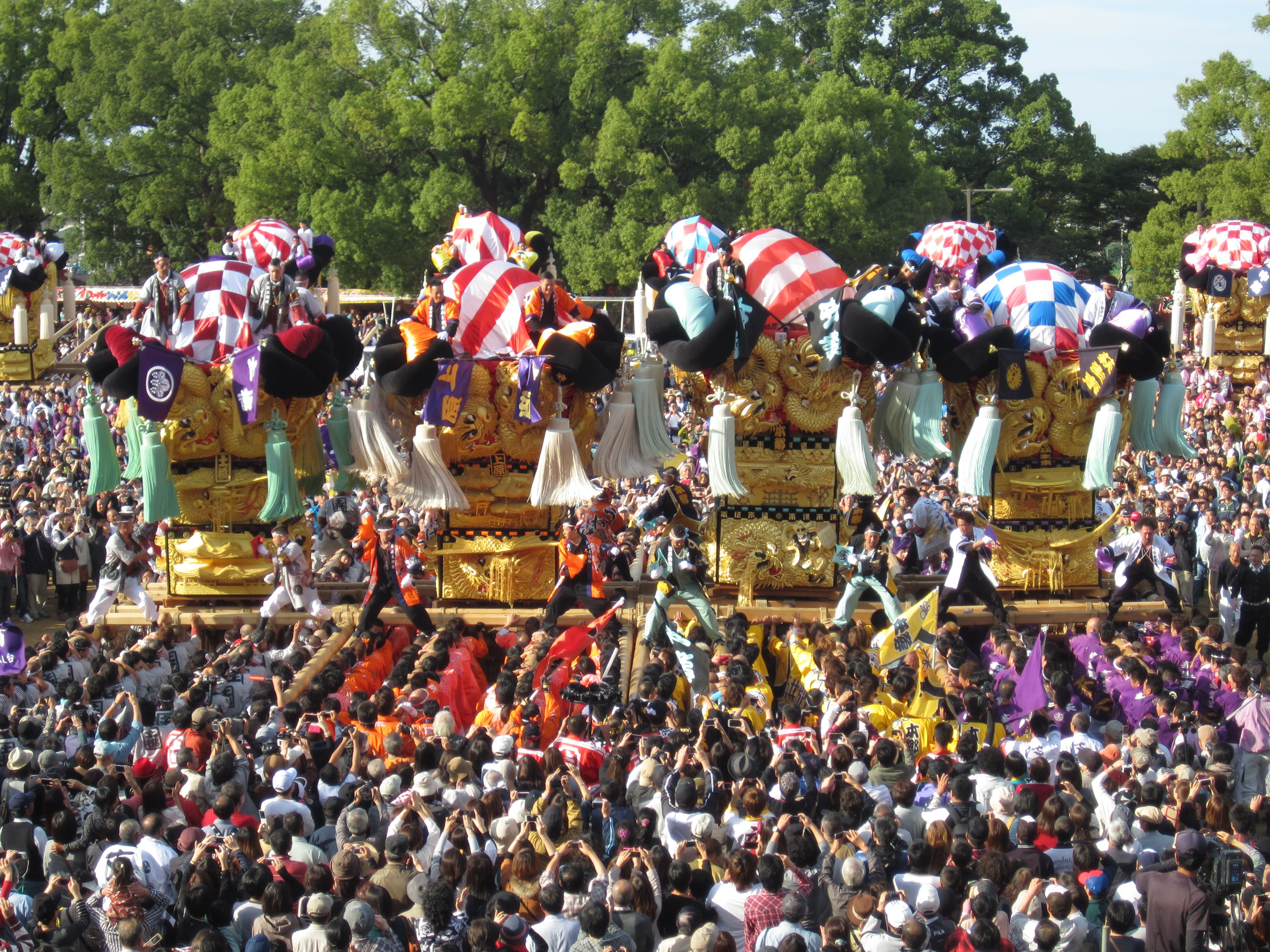 The floats are usually decorated with symbols, tassels, and beautiful embellishments. Every year, more than 100,000 visitors will attend the festival to immerse in the culture and be part of the great event. 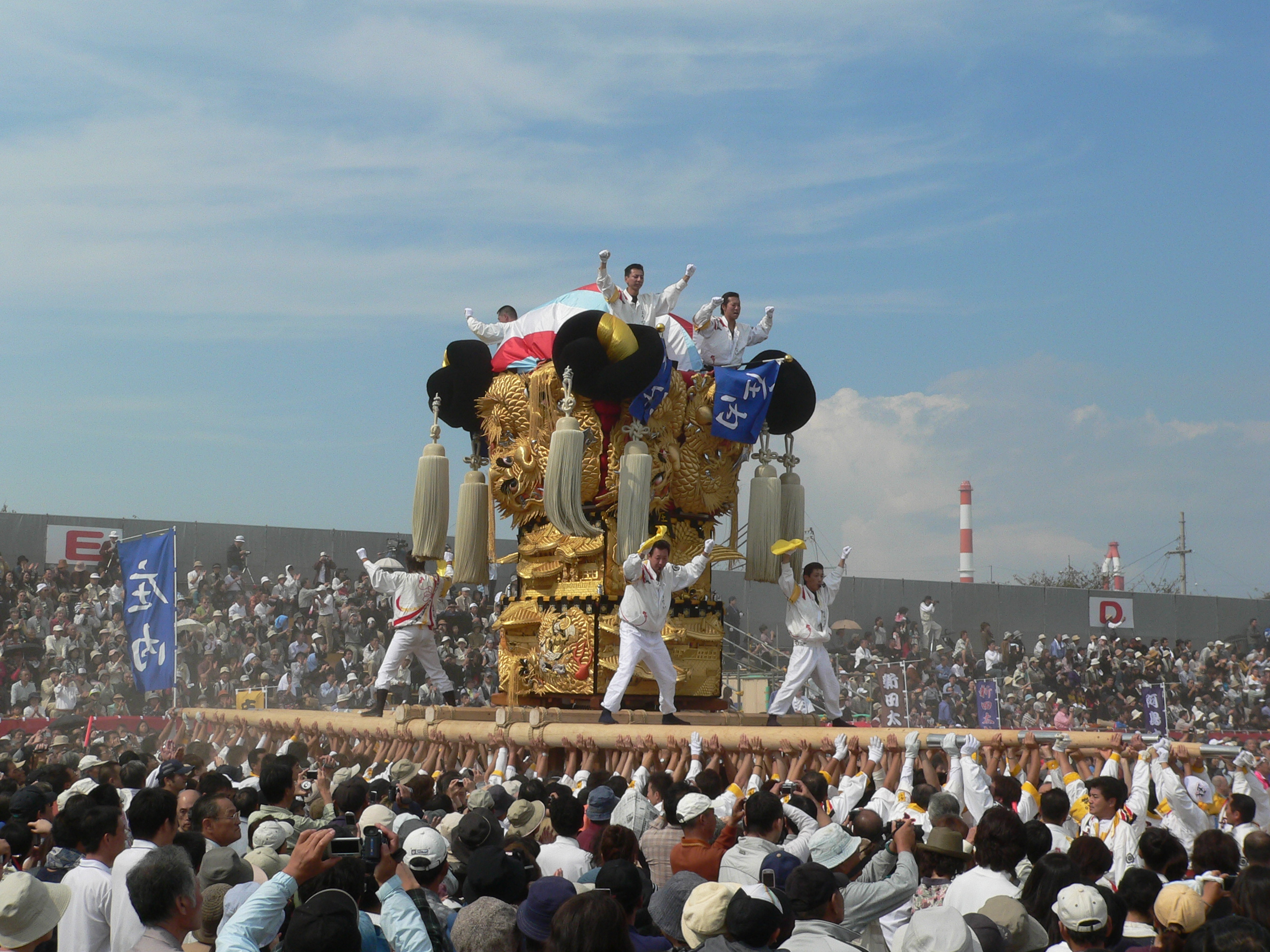 During the Heian Period, Yuki-jinja Shrine was relocated from Kyoto to Kurama to protect the shrine from natural disasters. Kurama is a mountainous town located one hour away from the Kyoto city. Kurama Fire Festival is celebrated on every 22nd October to re-enact the ritual and to welcome kami (spirits or gods) to their town. The locals will carry flaming torches up to the Shrine. Children will start the festival by carrying the torches, followed by youngsters and finally, elder men. They will gather the torches in front of a gate and bring portable shrine (Mikoshi) down to the village. As an offering to the gods, they will do special performances. After the ritual ended, they will return the Mikoshi back to the shrine. 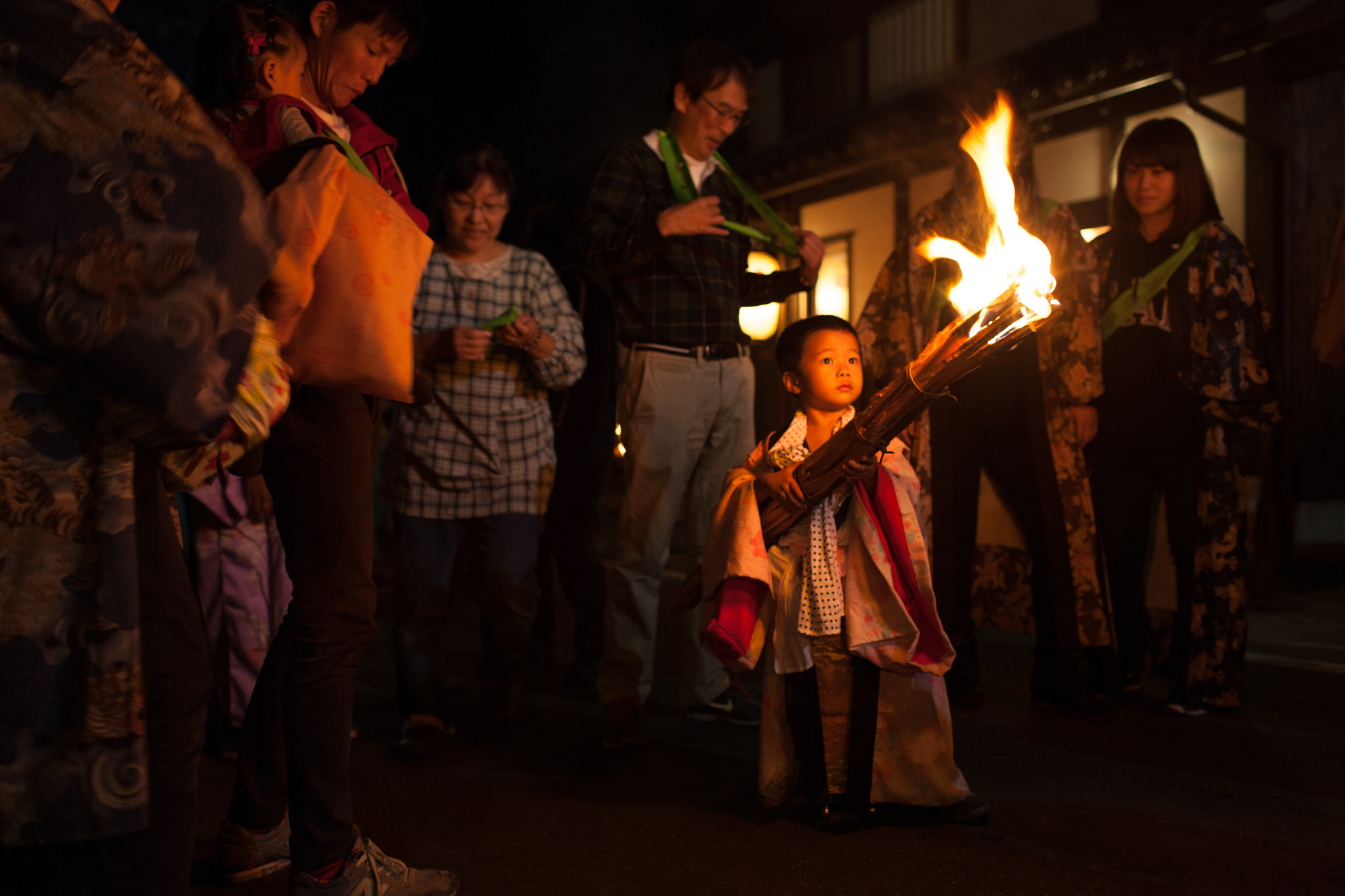 Take note that the festival will end at late night, still, the view you’ll see is truly remarkable. This celebration has drawn many visitors outside Kurama because of its uniqueness. Kurama Fire Festival is known as one of Kyoto’s Great Fire Festival which gives you more reasons to attend the festival this October. 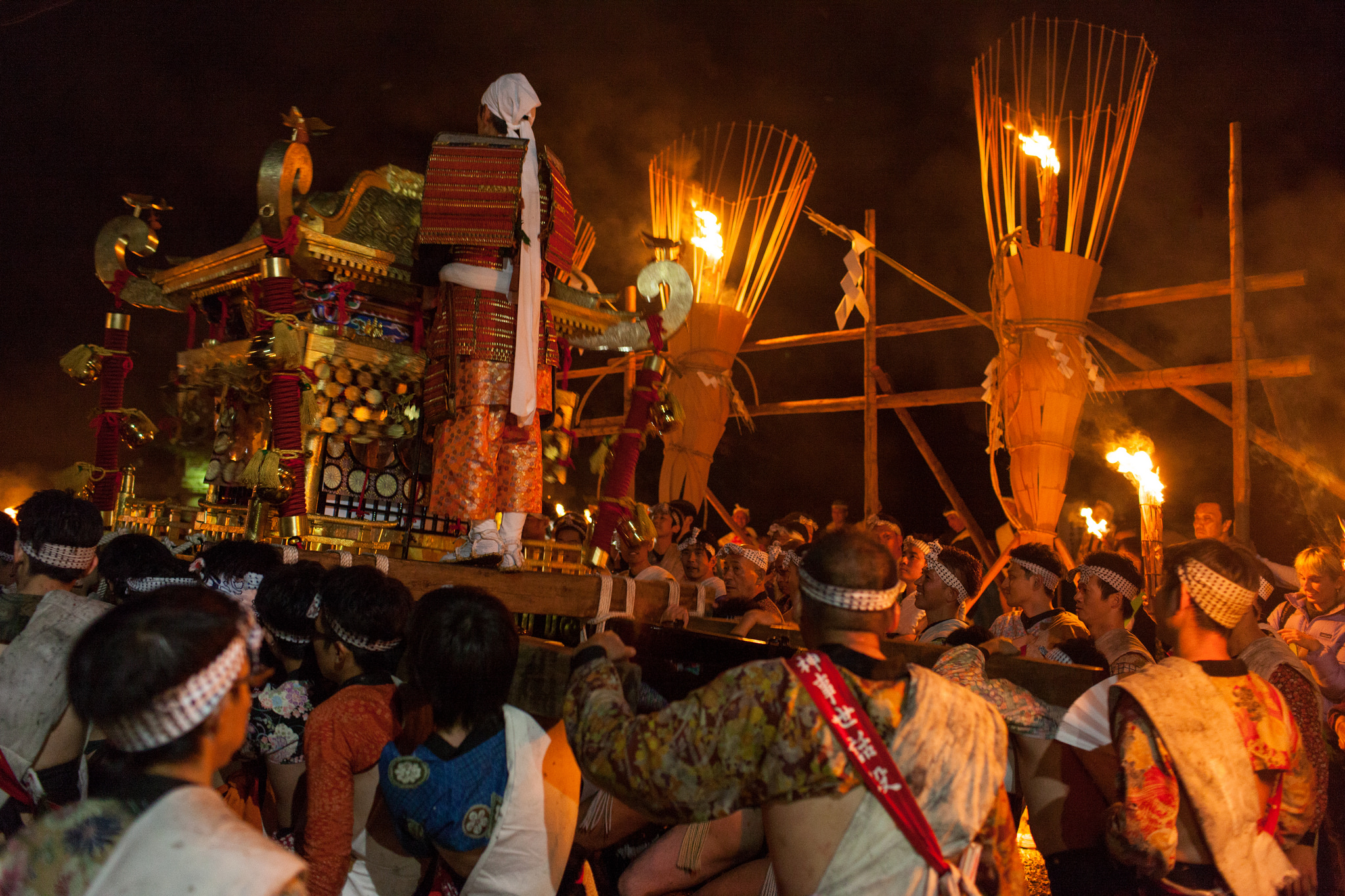