Step into the world of Toyota automobiles in Nagoya No ratings yet.

8 Halal Souvenirs to buy in Japan No ratings yet. 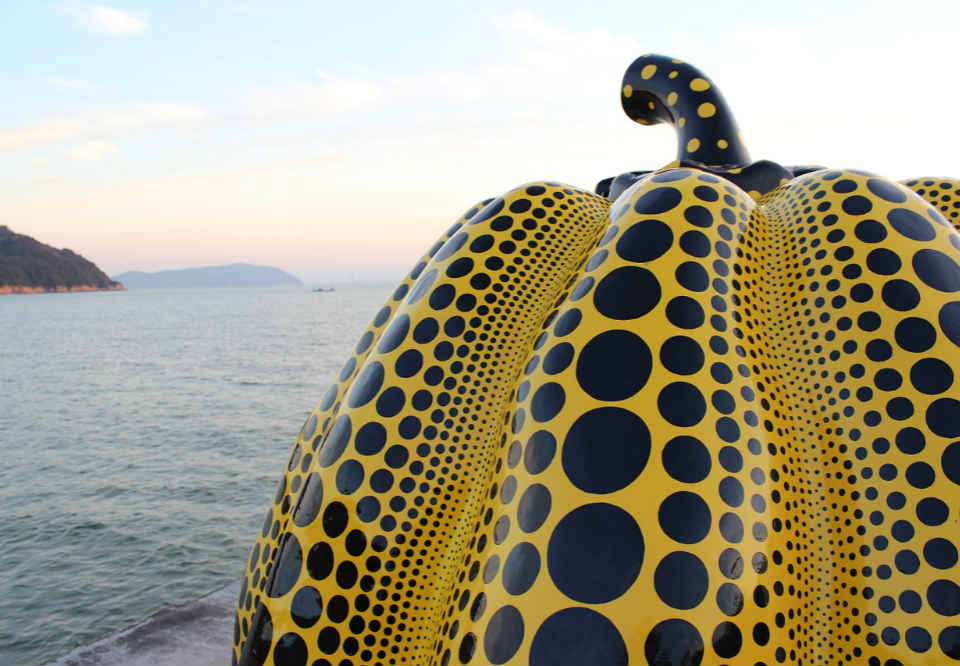 For many people, the first thing that comes to mind when speaking about Kagawa Prefecture is Sanuki Udon. While it is true that udon tasting is the main reason people visit Kagawa, the prefecture also packs lots of attractions that visitors can see and do alongside enjoying the delicious noodles.

Located in the northeastern corner of Shikoku and facing the Seto Inland Sea, Kagawa has many outlying islands offering scenic beauty that perfectly complements its mild climate. The prefecture is also famous for being the home to the final 22 temples of the Shikoku 88 Pilgrimage, which tours around 88 Buddhist temples associated with the founder of the Shingon sect of Buddhism, Kobo Daishi (also known as Kukai).

This article covers ten reasons to visit Kagawa besides Sanuki Udon, from baked chicken to sunset, do include some of these in the list when you visit Kagawa! 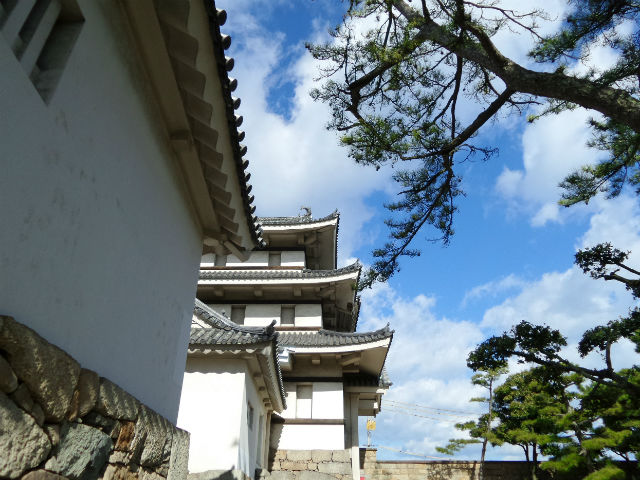 As the prefectural capital, there are several sights worth checking out in the Takamatsu city centre. Take a stroll around the Tamamo Park where the Takamatsu Castle formerly stood. While there are only a few remains of the castle left, visitors are attracted by the park’s well-tended garden and old pine trees. 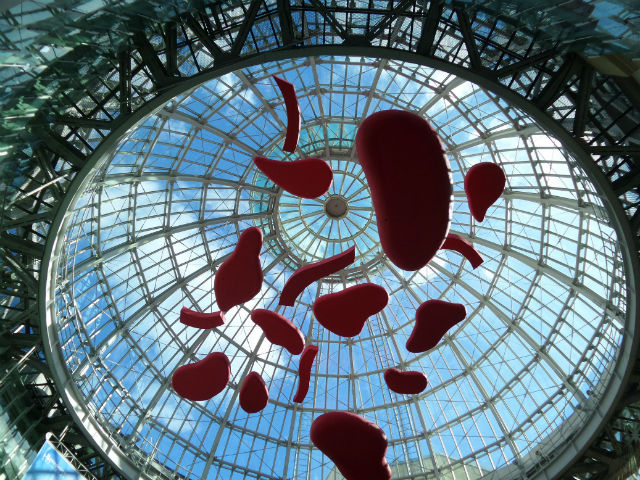 Visit the longest shopping arcade in Japan, Takamatsu Central Shopping Street. Lined with various kinds of stores, restaurants, and boutiques, this shopping arcade is where the locals often shop for daily necessities. At the end of the day, don’t forget to check out the sunset and afterwards the glowing red Seto Marker lighthouse on the seafront promenade of Takamatsu Port, which is just a short walk away from the JR Takamatsu Station. 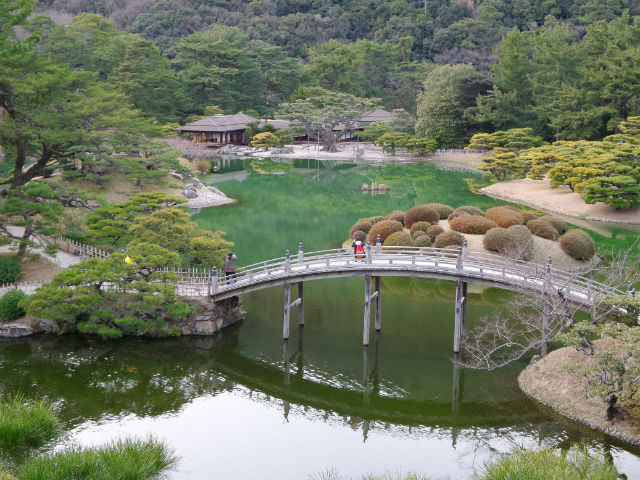 Rated maximum 3 stars by the Michelin Green Guide Japan, Ritsurin Koen is a must-see attraction in Takamatsu. This exquisite Edo-period garden took over 100 years to construct and was once a garden for the local daimyo. It features 6 ponds, 13 hills, carefully crafted footpaths and viewpoints that highlight the beauty of the park’s changing landscape. Besides strolling through the park, visitors can also take a boat ride across the pond, or savour some matcha and wagashi sweet at the Kikugetsu teahouse that looks out onto the picturesque garden. 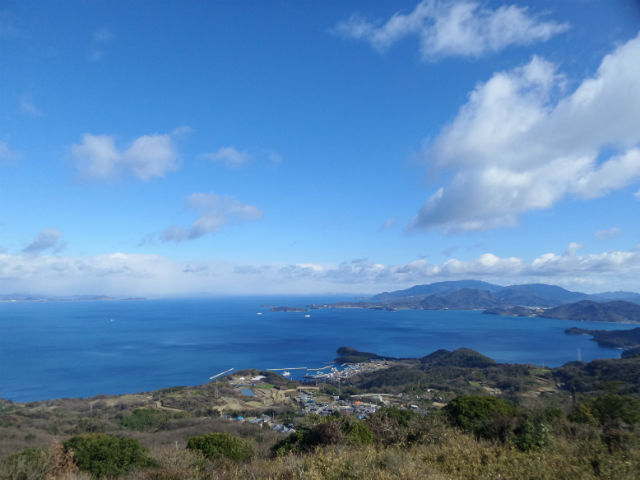 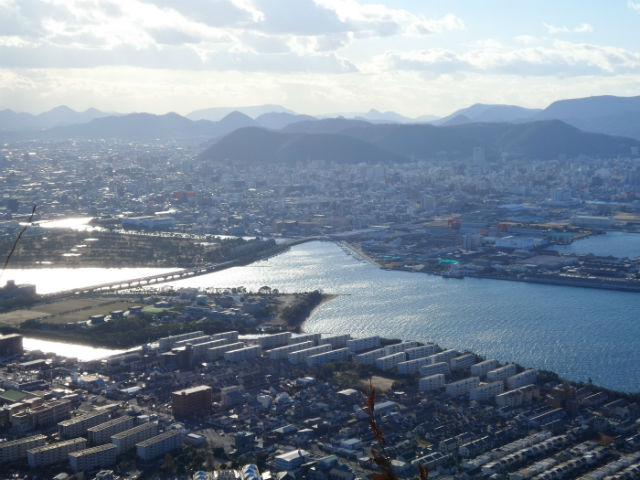 This flat-topped mountain is located just outside of Takamatsu city. On the summit, there are viewpoints where visitors can take in panoramic views of the Seto Inland Sea and the cityscape of Takamatsu. Also sits atop the mountain is the Yashima Temple, one of the Shikoku 88 Pilgrimage temples which houses a museum displaying artifacts related to the history of Yashima. At the base, there is Shikoku Mura, an open-air museum exhibiting an impressive collection of actual houses and structures relocated here from all over Shikoku, informing the public about how the people in the region used to live in the past. 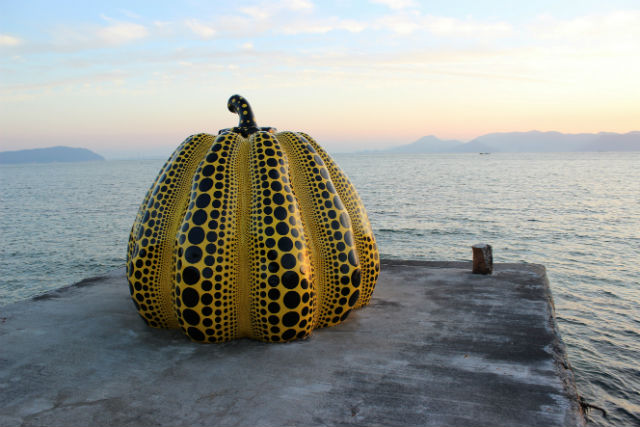 Art is everywhere in Kagawa that you can plan an art journey alone. Many islands have even become contemporary art lover’s paradises featuring numerous artworks by local as well as internationally renowned artists. Naoshima is the most popular of all these islands. The polka dot pumpkins by Kusama Yayoi are the icon of the island, same goes to the Benesse House and Chichu Art Museum by Ando Tadao, as well as the art houses that scatter throughout the port town of Honmura. Public facilities such as schools, town halls, and public bathhouse also fuse art and utilitarian function, literally making Naoshima an open-air art museum in its own right. 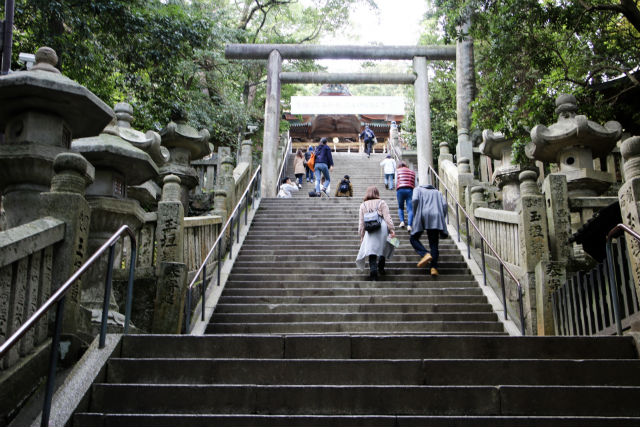 Also known as Konpirasan, Kotohiragu is a famous shrine in the small town of Kotohira. It is dedicated to the God of the Sea, sitting on the slope of a mountain that overlooks the expansive Sanuki Plain. The base of the mountain is a shopping street lined with many shops and Sanuki udon restaurants, great for filling up before or after visiting the shrine which takes a backbreaking 785 stone steps to reach the main hall alone, and another 583 to reach the inner shrine. Even so, the beautiful shrine buildings and the stunning views from the top make the climb a rewarding one. 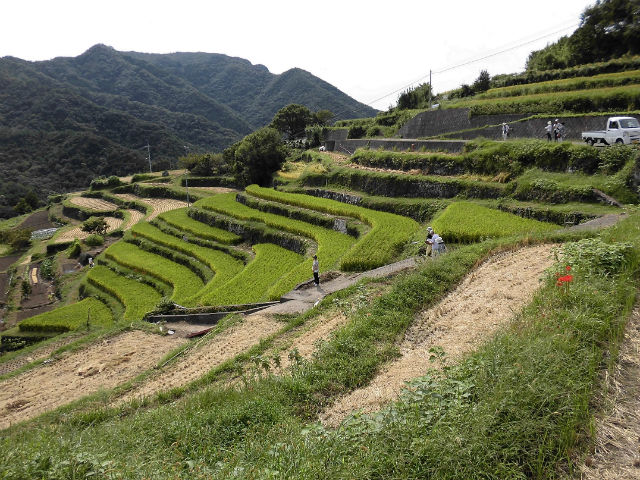 Being the largest island of Kagawa, Shodoshima is well-known for its olives, soy sauce, and scenic attractions. Take the ropeway across the spectacular Kankakei, a ravine which looks especially gorgeous when the autumnal colours set in in November. Also worth checking out is the terraced rice fields of Senmaida, situated in the island’s mountainous interior. 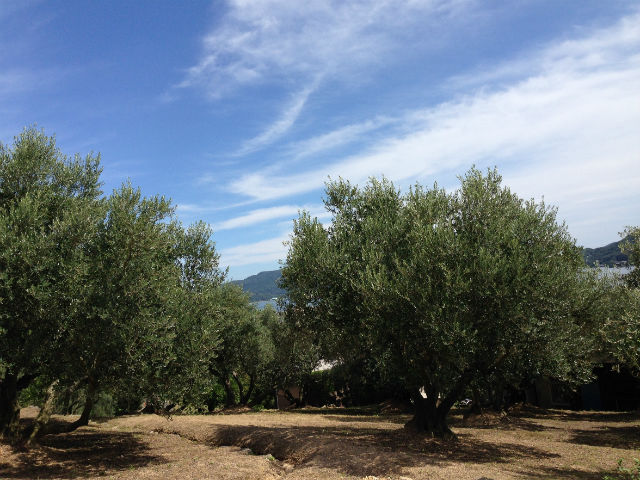 Take a stroll at the Olive Park and learn what makes Shodoshima the largest producer of olive in Japan. At Marukin Soy Sauce Museum which documents the process of soy sauce making, there is the unusual soy sauce flavoured soft serve awaits the curious foodies out there. Besides that, there is also a sandbar called The Angel Road that appears only twice daily during low tide. It is a popular dating spot, and visitors can walk the road when it shows up, as well as observe it from the lookout point located on a hill nearby. 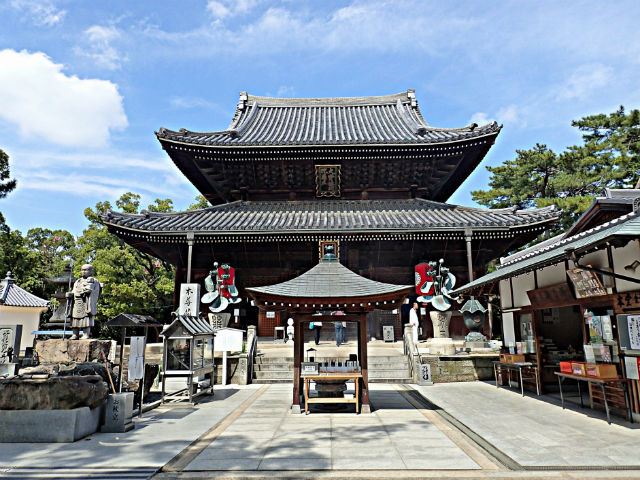 Zentsuji is a Buddhist temple in the Zentsuji city of Kagawa, famous for being the birthplace of Kukai. Founded in 807, the temple is the 75th stop of the Shikoku 88 pilgrimage route. The temple is divided into the eastern section (Tou-in) and the western section (Sai-in). Kukai was born and grew up in the western section, whereas the eastern section is the site of the temple was originally established after Kukai returned from a study trip to China. The temple houses many relics and sacred sites related to Kukai, in addition to a number of important structures and properties such as the Golden Hall (rebuilt in 1700) and the five-storey pagoda (rebuilt in 1884). 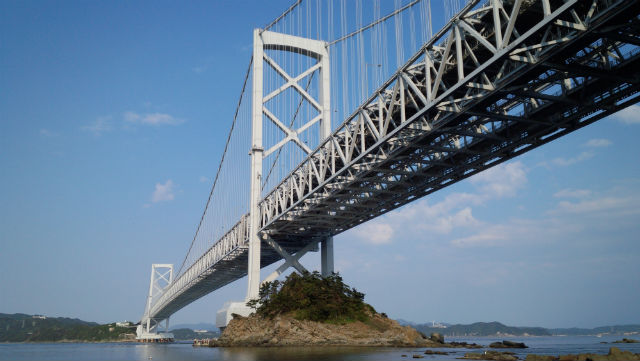 The Seto Ohashi Bridge is one of the iconic sights of the Seto Inland Sea, connecting Okayama in Honshu and Kagawa in Shikoku. Visitors can view this great bridge right before their eyes at the Seto Ohashi Memorial Park, which was built to commemorate the completion of the bridge. Located in the northern city of Sakaide, the public park is made up of a series of recreational facilities such as lawns, fountains, sports fields, as well as a commemorative hall featuring informative displays related to the bridge’s construction and a rooftop viewing platform. 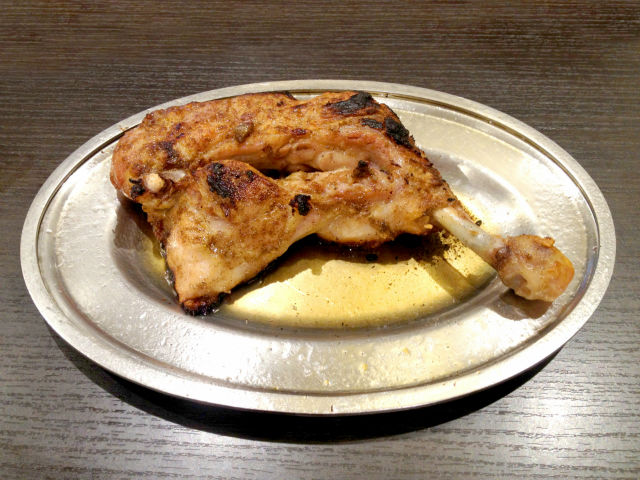 The Honetsuki-dori (骨付鳥, bone-in-chicken) is another must-try delicacy of Kagawa. It is a whole chicken thigh seasoned with spices and baked until crispy on the outside and juicy, tender on the inside. You can easily find this popular dish in its place of origin, Marugame City. On Shodoshima, the first place in Japan to successfully cultivate olive, visitors get to enjoy delicious meals prepared with local olives, including olive somen and dishes using beef, pork or yellowtail raised on special feed mixed with local olives. 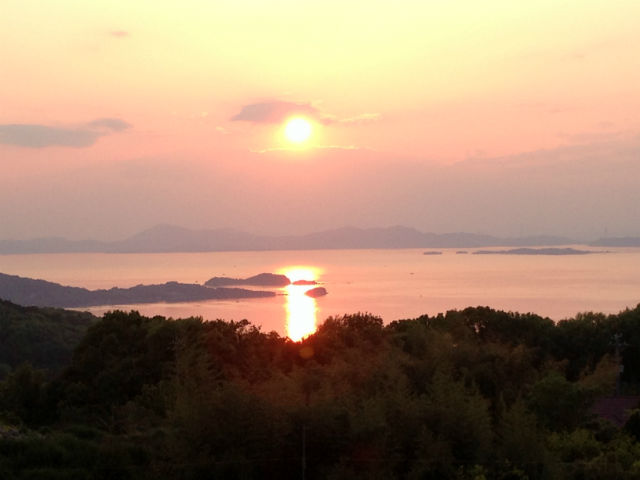 Modern art may have turned many islands in Kagawa into trendy hubs of creativity, but there is one thing in common with the islands that has never changed – sunny weather, sandy beaches, blue sky and tranquil blue waters that seem to be always present. The rural charm and laidback atmosphere on these islands such as Teshima, Megijima, Ogijima, even Shodoshima and Naoshima, are a world away from the bustling cities like Tokyo or Osaka. Viewing the sunset over the Seto Inland Sea on these islands could be one of the memorable experiences visitors can have in Kagawa.