Vegan & Vegetarian Restaurants You Can Find in Tokyo No ratings yet. 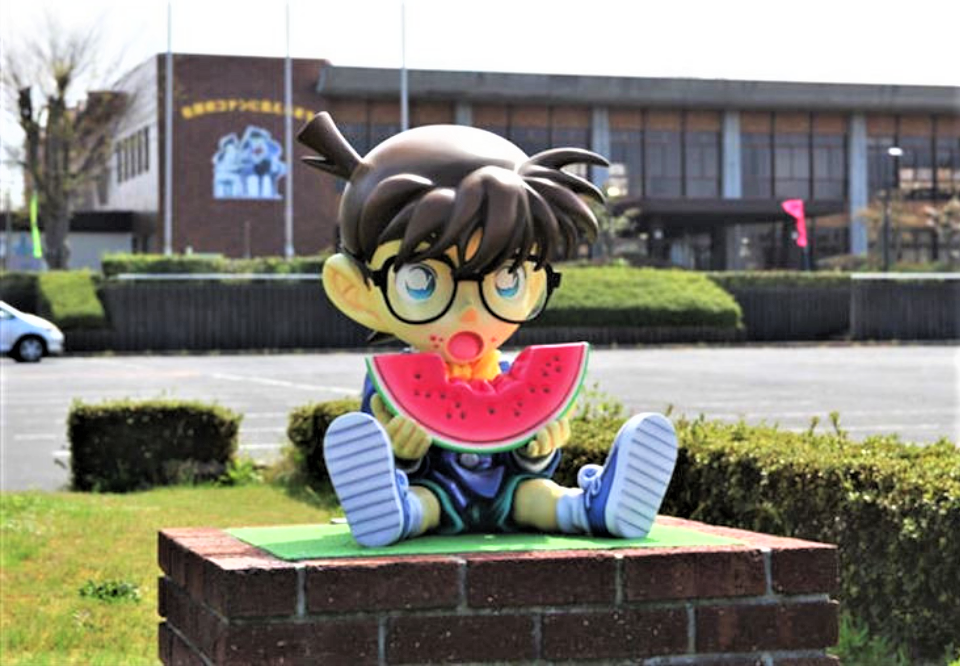 Anime is truly one of Japan’s wonders because of its powerful influence on the pop-culture world. Before this, Astro Boy was named as the first anime when it was aired back in 1963. However, during the early 2000s, a dealer found a collection of films from a family in Kyoto. He brought the collection to Matsumoto, an iconography expert at Osaka to inspect the content. Then, Matsumoto found an old filmstrip of an anime called Katsudō Shashin. He and other experts assumed that the anime was made sometime before 1912. So, as it turns out, Katsudō Shashin was the first anime ever created in Japan.

As you are well aware, Japan has a lot of museums dedicated to manga artists or the anime/manga itself. One of the famous anime/manga museums in Japan is The Ghibli Museum. In this article, we would like to introduce you to other lesser-known anime and manga museums you must visit. 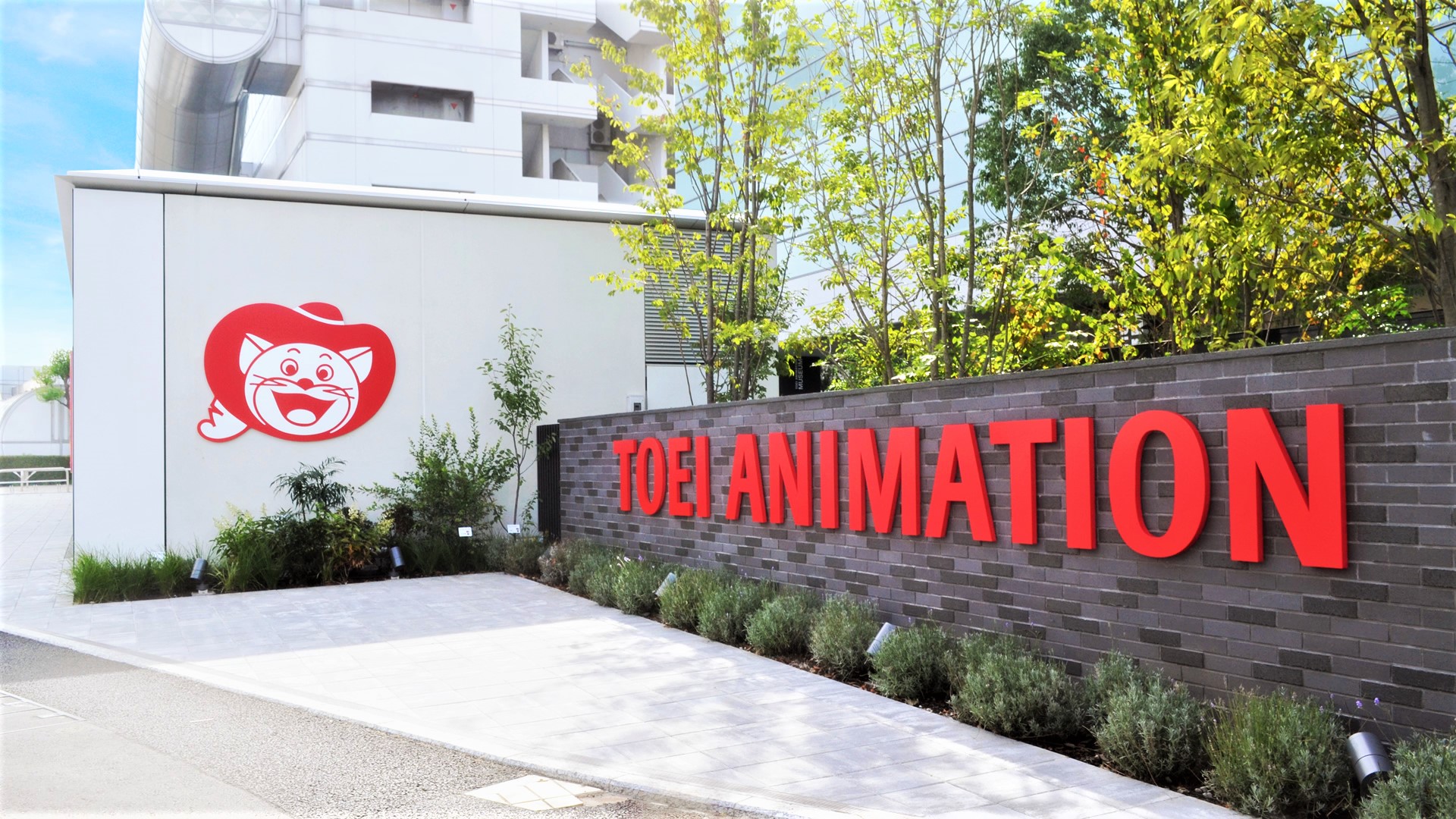 Anime creator for popular series such as One Piece, Sailor Moon and Dragon Ball, Toei Animation Studio opened a museum in Tokyo on July 2018. As you enter the museum, you will notice a Toei Animation’s mascot, Pero, in front of the entrance. Inside, there is a huge screen displaying all Toei’s works for the past years. You can also see original drawings of your favourite Toei’s anime and how it was created.

While you are here, take a picture with life-sized figures placed inside the museum. Before you leave, go to the Gift Shop to purchase limited edition merchandises.

For a hardcore collector of toys such as Power Rangers, Sailor Moon and all popular anime, this is your heaven on earth!

Bandai Museum, Tochigi was moved from its original location in Chiba. The museum features four main areas namely, Japan Toy Museum, World Toy Museum. Hobby Museum and Edison Museum. In total, there are more than 35,000 toys displayed inside the museum. 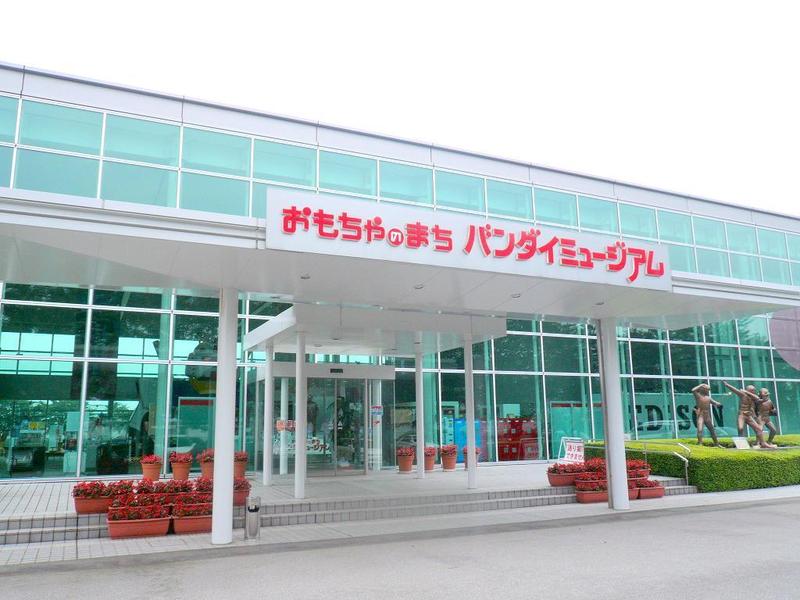 Image Source: You in Japan.

Japan Toy Museum exhibits Japanese toys since the Edo Period until the current year from Masked Rider, Astro Boy, Mazinger Z and others. In World Toy, they brought some of London Toy Museum and displayed it here where you will see a 250 years old antique doll, a 19th-century moving coal mine and a Victorian dollhouse. Meanwhile, in Hobby Museum, this is where the life-sized Gundam collections are displayed. Lastly, an area dedicated to Thomas Edison, present some of his earliest inventions like the telephone, gramophone and toaster in Edison Museum.

Anpanman is a Japanese superhero illustrated book for children debuted in 1973. After that, he was adapted into an anime series and became popular among children in Japan. In total, there are five Anpanman museums in Japan which are in Yokohama, Nagoya, Sendai, Kobe, and Fukuoka. 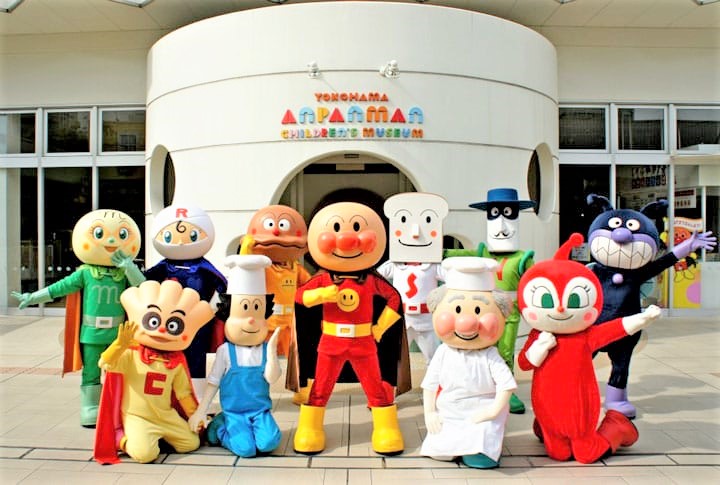 In Yokohama, the museum is separated into a museum and a mall. This museum is very suitable for children as it is interactive and fun. The first floor of the museum is Wanpaku Town, where you can watch live performances and musical numbers. The second floor is Fureai Town. There are UFO car, train ride and craft making class. On the third floor, Nakayoshi Town is the place for children to ride Anpanman-Go! and see Anpanman diorama. 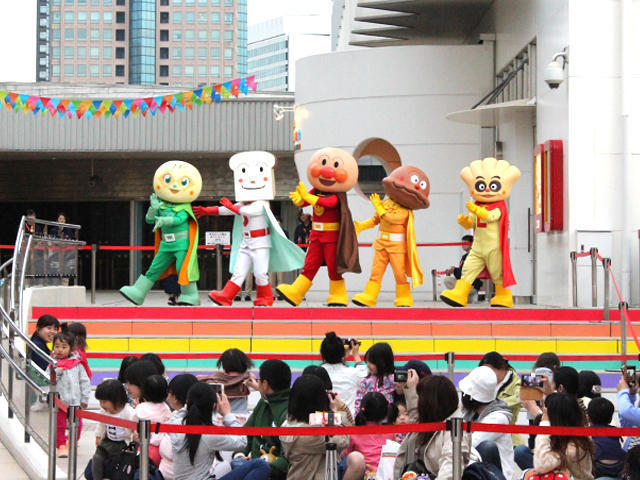 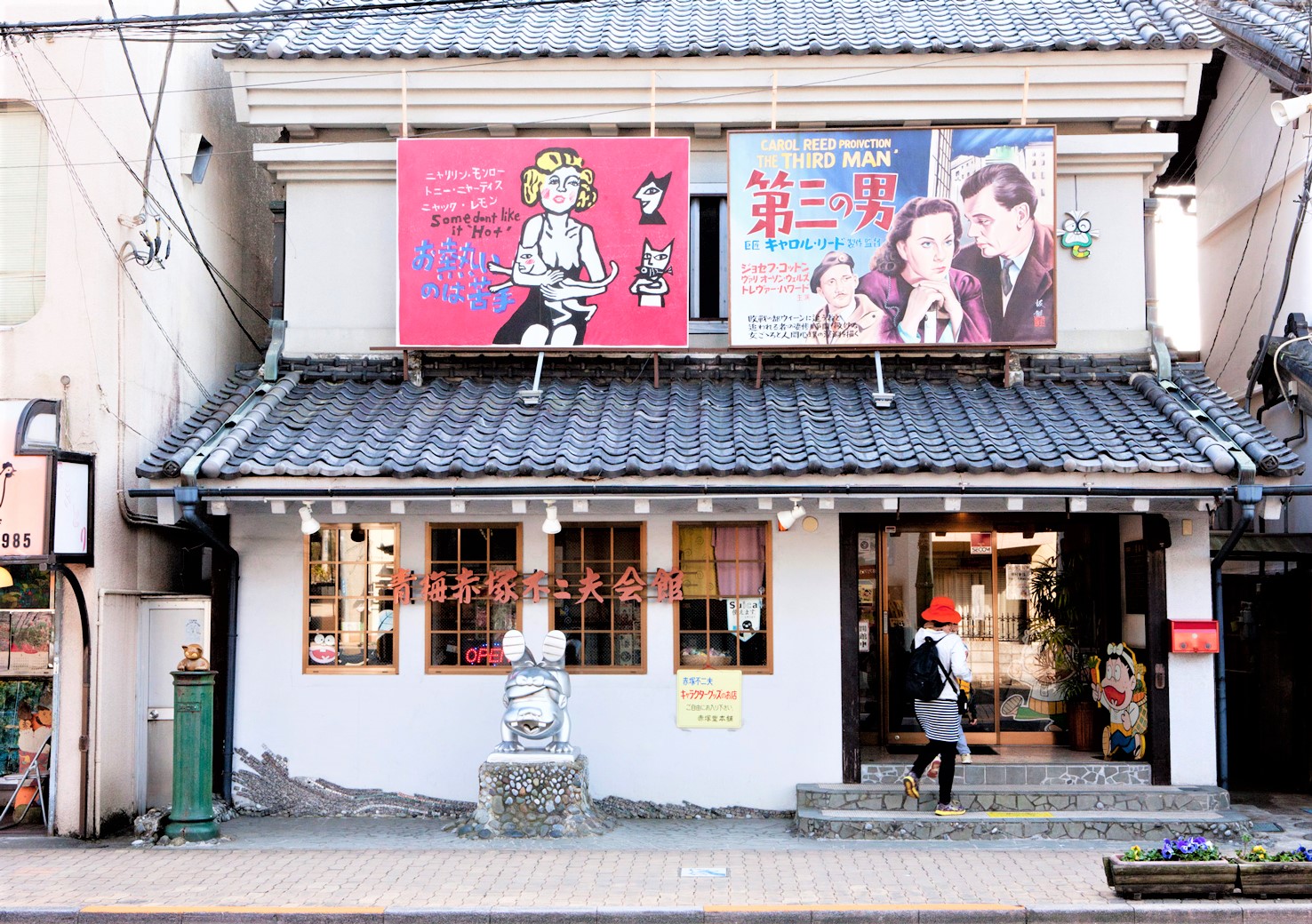 Situated in a small town of Ome, Tokyo is a museum dedicated to the late Fujio Akatsuka, the creator of Tensai Bakabon and Osomatsu-kun during the 1960s.

The two storey building reveals the life of Akatsuka before he passed away in 2008. On the first floor, you will find some weird displays and also a cut-out cardboard statue of Osomatsu-kun. On the second floor, they built a replica of Akatsuka’s apartment which he shared with legendary manga artists, Osamu Tezuka and Fujiko F. Fujio. See also original manuscripts of his anime series hanged on the wall.

A popular petite character, Chibi Maruko Chan has her very own wonderland. Located at S-Pulse Dream Plaza in Shizuoka, this museum consists of paid and free zones. The paid zone is where you get to see a replica of Maruko’s classroom, kitchen, living room and more. You can also rent Maruko, Tama-chan, Hanawa-kun, Noguchi-san, Migiwa-san as well as Shirogasaki’s costumes for ¥300. 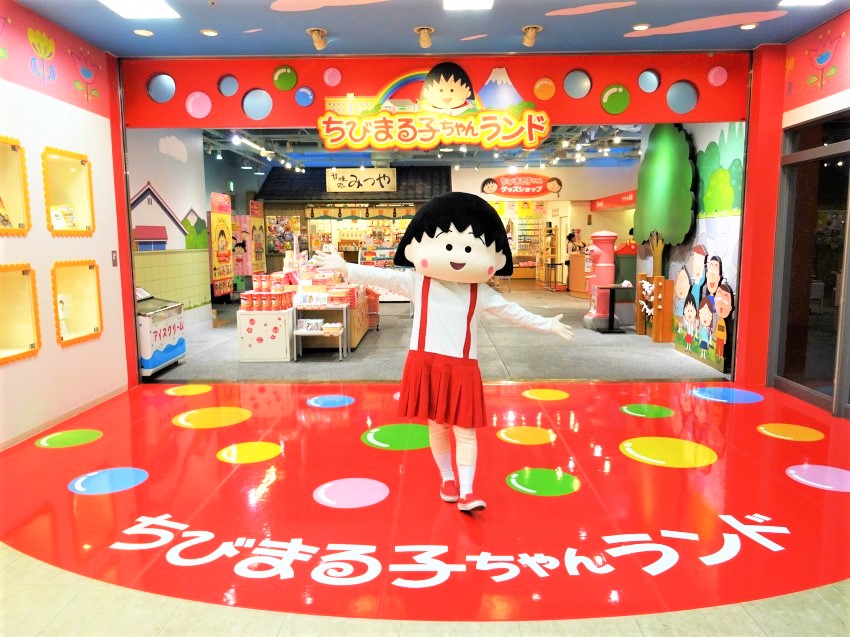 Throughout the area, you will meet Maruko’s entire family members including her grandparents in each room. There are also late Momoko Sakura’s original drawings of the series arranged inside. In the free zone, you can purchase Chibi Maruko Chan’s merchandises and snacks. 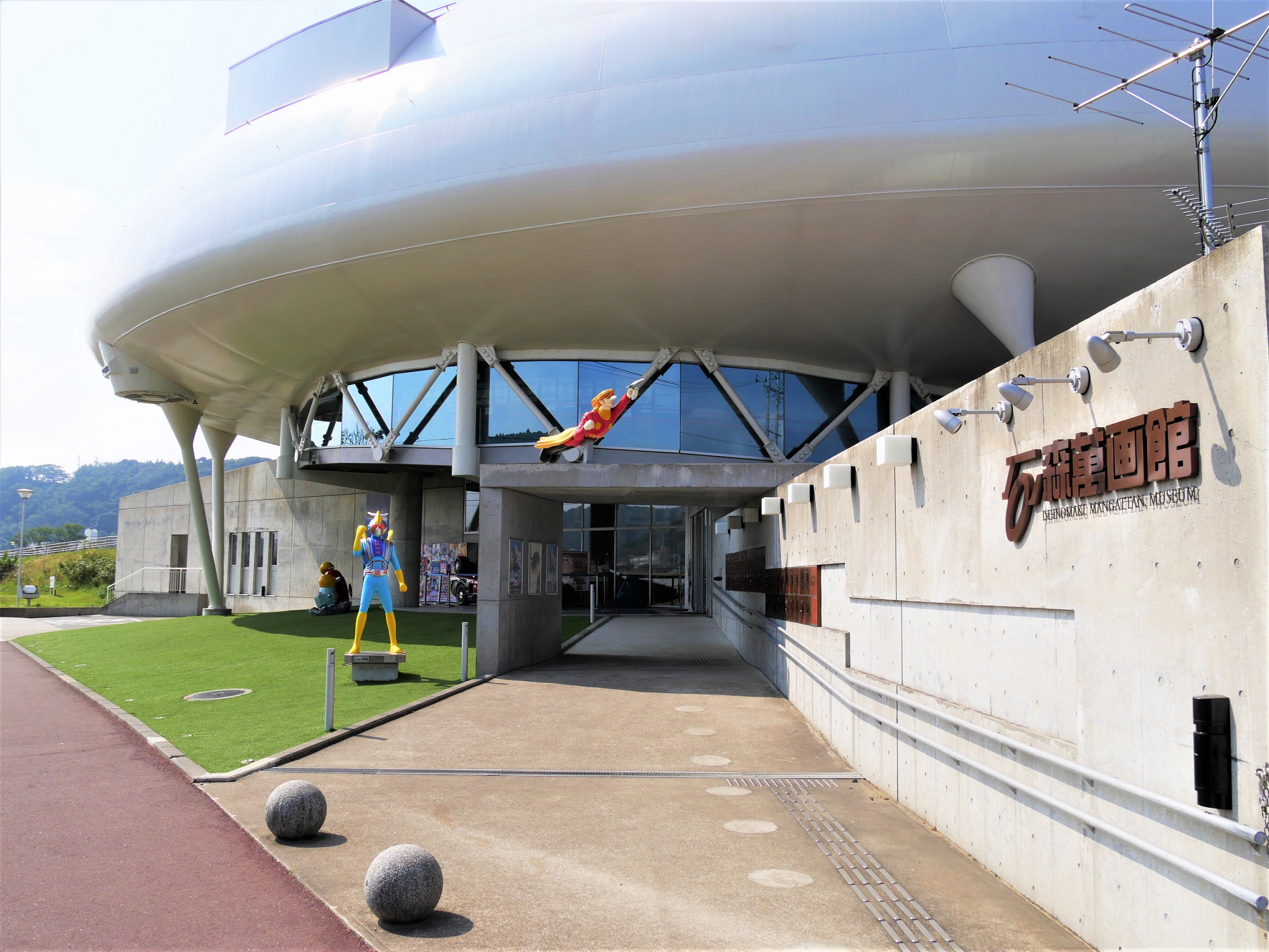 If you watched or read Kamen Rider or Cyborg 009, you must be familiar with the name Ishinomori Shotaro. Ishinomori was the creator of these two popular series during the 1960s to 1970s. The Ishinomori Manga Museum was built to exhibit Ishinomori’s works throughout his career as a manga artist. In this museum, each floor displays Cyborg 009 and Kamen Rider’s figures including fun areas. You can also view and read some of his original artworks plus drawings, of his popular manga series in the library.

Apart from that, check out the evolution of Kamen Rider’s mask from its first debut until Kamen Rider Ex-aid, shake your hand with Ishinomori’s bronze statue hand and more.

Suginami Animation Museum is the place where you can discover the history of Japanese animation and its production procedure. 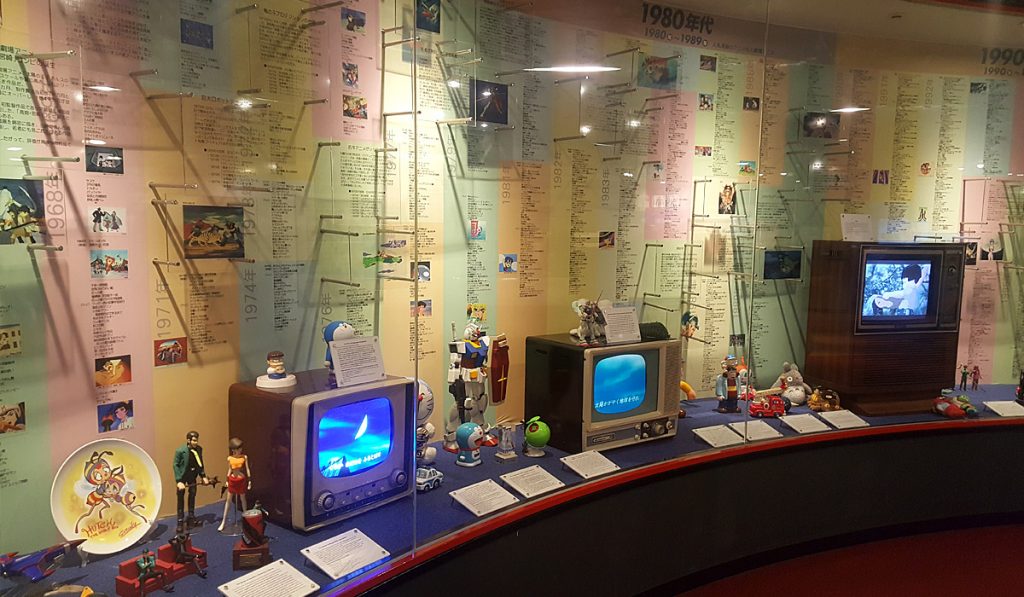 The timeline of anime in Japan. Image Source: Your Japan.

The museum features a huge board of anime timeline starting from as early as 1917 until recent times. There is an anime theatre in which you can watch countless episodes of anime series as well as films. Occasionally, the museum will showcase a special exhibition to highlight some of the notable artists in Japan. They used to display the works of Satoshi Kon, the creator of Paprika, Tokyo Godfathers and more.

Ever dream of becoming a seiyuu (voice actor)? Here, you can try dubbing for anime such as Astro Boy for certain scenes in the film. However, the script is only available in Japanese. If you love to explore another aspect of anime in Japan, this is the place to be. Furthermore, there are no admission fees! 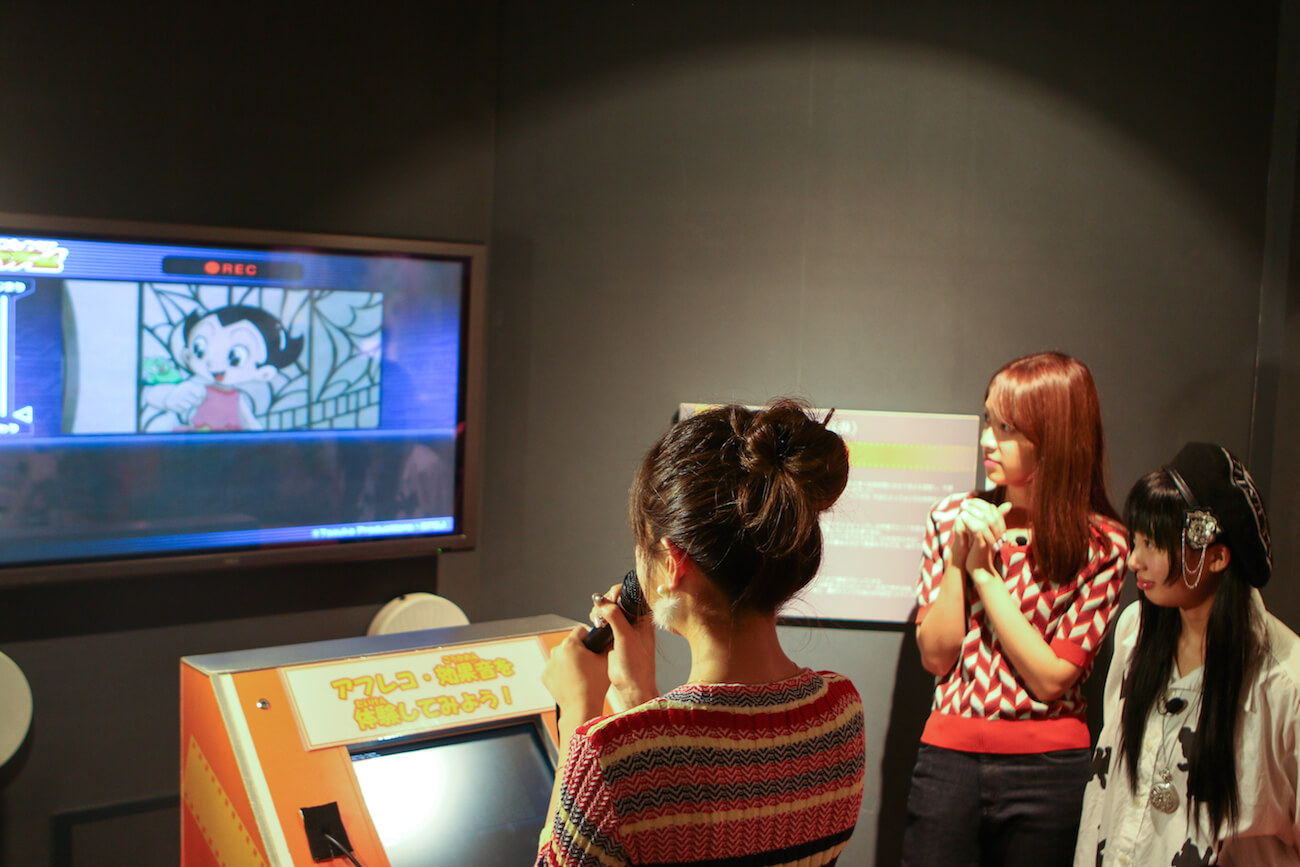 A virtual musical idol, Hakune Miku has her very own museum where you can see her actual-sized figure, purchase limited edition merchandises and watch 360-degree panoramic view of Hokkaido. You can read about Hakune Miku in a manga entitled Hatsune Miku: Unofficial Hatsune Mixwritten by Kei. You can visit the museum at New Chitose Airport on the fourth floor. 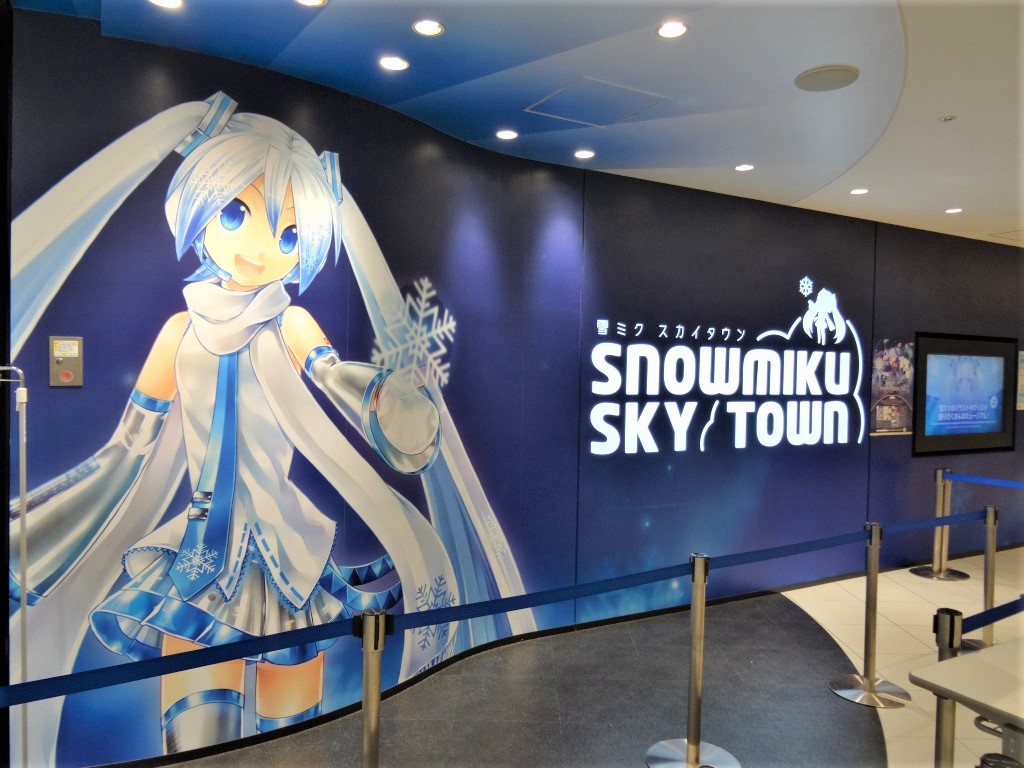 You can watch a holographic live concert of Hatsune Miku, which is one of the most interesting features in the museum. In the Hokkaido Gurutto Theatre, watch Snow Symphony, a music video featuring the characters as well as enjoying the view of Hokkaido, Furano and Biei up close. Don’t forget to purchase Hakune Miku and friends’ merchandises such as ramen noodles before you leave the museum.

For Detective Conan lovers, visit the town of Hokueicho, an hour away from Tottori. This town is also known as The Town Where You Can Meet Detective Conan. Dedicated to Gosho Aoyama’s popular anime series, this museum consists of several major elements in Detective Conan such as his voice-changing bowtie, skateboard and the yellow car. From the entrance, you can spot the yellow car and the statue of The Junior Detective League. 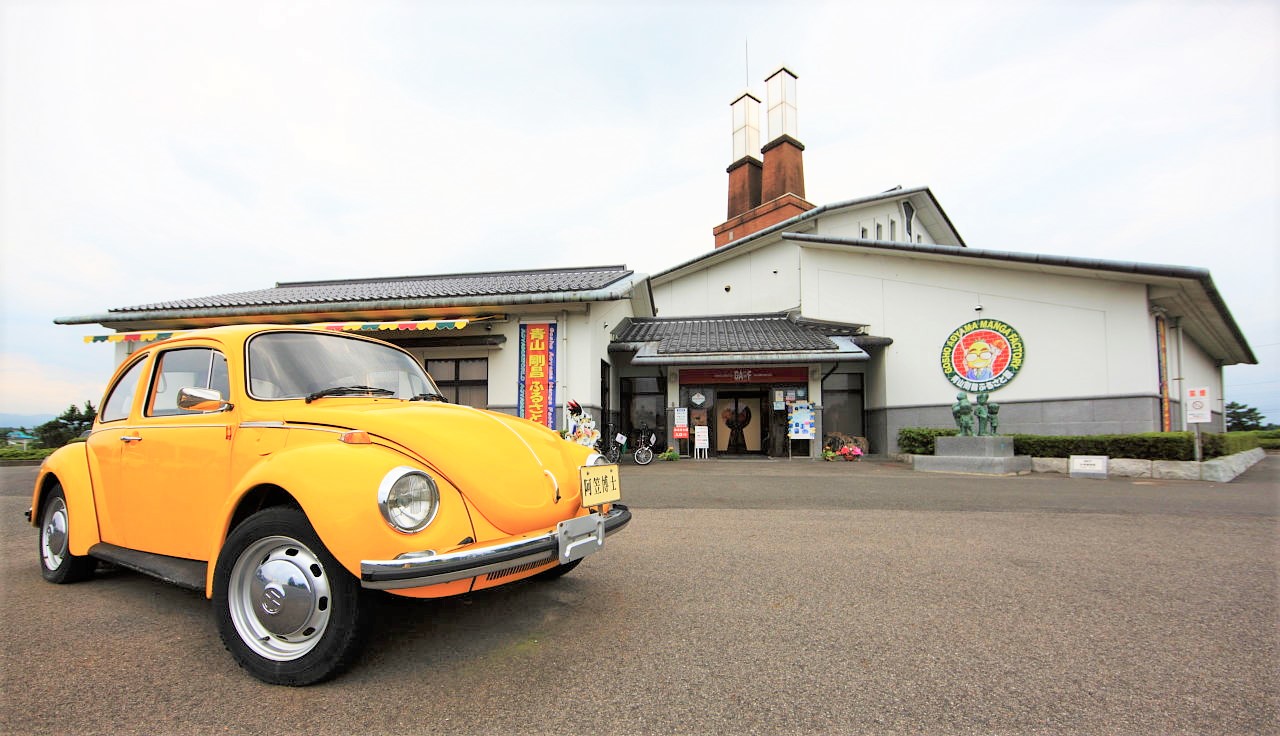 The entrance to the museum. Image Source: Clover Diary on Blogspot.

There are Aoyama’s original drawings, a model of his office and several replicas of Dr Agasa’s inventions. Besides that, you can also ride Conan’s skateboard to pursue criminals and change your voice to other characters’ in Conan series using the voice-changing bowtie. 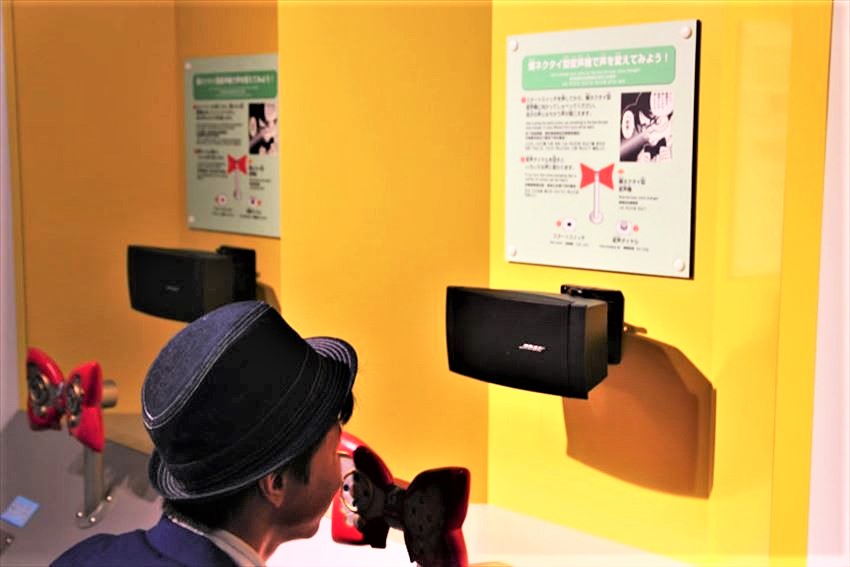 After that, wander around Conan Street where you will find many Conan statues which are perfect for a photo opportunity!

A popular comic strip published in Asahi Shimbun newspaper, Sazae-san debuted in 1946 and adapted into an anime series in 1969. Surprisingly, the series is still on-going and holds the Guinness World Record for the longest running animated television series in history. Sazae-san was created by Hasegawa Machiko, the first female manga artist. 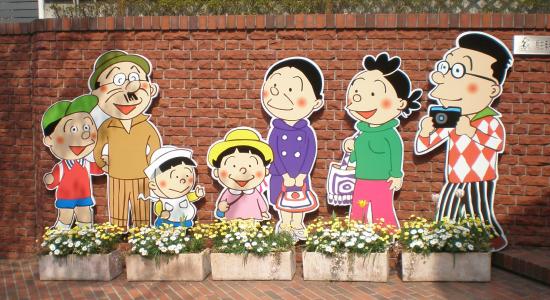 The museum shows Machiko’s original drawings of Sazae-san, Ijiwaru Baa-san, Apron Oba-san and more. Also, there are some of her original and collectible paintings as well as handmade pottery displayed inside the museum. After that, drop by Lien de Sazae-san café that serves everything Sazae-san from drinks, snacks to limited edition items. It is situated near to the museum. 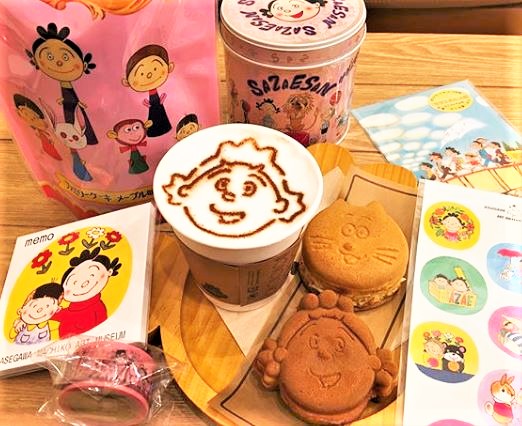